The Clinical Effect of Domperidone on Reflux Gastritis

The present clinical study observed the effect of domperidone on reflux gastritis. In this study, 200 patients with reflux gastritis were divided into the control group accepting routine drug therapy and the research group accepting domperidone treatment, each group contained 100 patients. The overall treatment efficiency, clinical symptom score before and after treatment and bile reflux monitoring indicators 24 h after treatment were compared between the two groups. On comparing the overall treatment efficiency of patients in both groups, the results showed that the research group was 96.00 % and the control group was 80.00 %. The score of clinical symptoms of the two groups of patients showed that the degree of improvement in the research group was significantly better than that in the control group after treatment, p<0.05. By comparing the monitoring indexes of bile reflux 24 h after treatment between the two groups, the research group had significant advantages in terms of the percent total reflux time, the number of refluxes and the number of refluxes lasting for more than 5 min. The application of domperidone in the treatment of reflux gastritis can significantly improve the therapeutic effect, improve the clinical symptoms and promote the recovery of patients as soon as possible.

Reflux gastritis is basically an inflammatory condition, which is mainly due to that the bile mix with intestinal fluids, passing through the pylorus, refluxing to the stomach, thereby stimulating the gastric mucosa. The main causes of reflux gastritis are pyloric dysfunction and chronic biliary tract diseases after subtotal gastrectomy. If prolonged, it may turn into gastric ulcer, gastric perforation and even gastric cancer[1,2].

There are many factors causing reflux gastritis, such as gastric mucosal inflammation caused by Helicobacter pylori (HP) infection and biliary reflux gastritis (figure 1) co-existing with HP infection (as shown in figure 2). Both HP infection and bile reflux are associated with mucosal damage, which may affect gastroduodenal motility and lead to bile reflux by increasing gastrin release[3,4]. Bile acid is the main component that causes mucosal damage during duodenal reflux. The other reason is that primary pyloric sphincter dysfunction can extend the opening time of the pylorus, relax the pylorus or keep it open, so that duodenal contents can flow back into the stomach, leading to duodenal gastric reflux[5]. The main measures to treat reflux gastritis are drugs, including domperidone, esomeprazole, aluminum magnesium carbonate and so on. In this study, the clinical efficacy of domperidone in the treatment of reflux gastritis was observed rigorously. Two hundred patients who had been treated for reflux gastritis in the Affiliated Hospital of Changchun University of Traditional Chinese Medicine from August 2016 to August 2018 were selected as research subjects. Patient inclusion and exclusion criteria were, patients in strict compliance with the diagnostic criteria of reflux gastritis of the gastroenterology and gastroendoscopy of Chinese medical association (figure 3), with clinical symptoms of abdominal pain, abdominal distension, vomiting and nausea. Gastroscopic examination results show that the gastric mucus is yellow or yellowish green due to the presence of bile. The gastric mucosa of the patient has edema, erosion, bile silt and the blood vessels on the mucosa surface have obvious hyperemia and dilated as well as presence of large number of inflammatory cells[6,7]. Patients with severe heart, liver and kidney dysfunction, mental disorders, allergy to the study drug and low compliance were excluded. The study was approved by the ethics committee of the hospital, and patients and their families had the right to know and signed formal informed consent. The patients were randomly divided into the research group and control group, each containing 100 patients. The mean age of the research group was 46.4±2.1 y that included 55 males and 45 females. The mean age of the patients in the control group was 48.3±3.5 y, with 53 males and 47 females. There was no significant difference in the general data before treatment. Figure 3: Examination chart of a patient with reflux gastritis 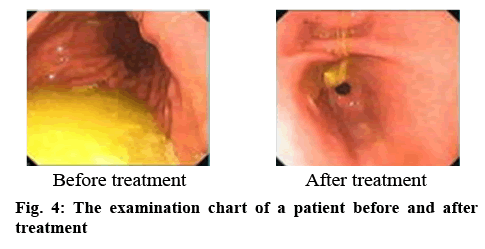 Figure 4: The examination chart of a patient before and after treatment

Table 1: Comparison of Clinical Symptom Score before and After Treatment between Two Groups

Table 2: Comparison of Monitoring Indexes of Bile Reflux after Treatment between the Two Groups

Table 3: Comparison of the Overall Treatment Effect between the Two Groups

With the continuous progress and development of medical technology, the accuracy of gastroscopy is increasingly high, which greatly improved the accuracy of diagnosing gastritis. According to relevant surveys[8], the proportion of reflux gastritis in gastritis diseases is about 12 %. Before the occurrence of reflux gastritis, there are two main preconditions. The first one is retrograde duodenal contraction activity, which promotes the reverse movement of duodenal contents, and the other is the pyloric opening. After bile reflux into the stomach, it can cause certain damage to the gastric mucosal barrier leading to inflammation of gastric mucosa or atrophy, intestinal metaplasia and other conditions, which are important causes of chronic atrophic gastritis. There have been many reports[9] showing that gastric ulcer can significantly increase the concentration of bile acid in the stomach, which indicates that bile acid plays a role in the pathogenesis of gastric ulcer. In addition, animal studies have shown that bile reflux has a carcinogenic effect, which is closely related to Barrett esophagus and esophageal adenocarcinoma. Therefore, it is essential to take effective drug treatment measures to actively improve the clinical symptoms of patients and improve the overall treatment efficiency.

As a highly effective peripheral dopamine receptor antagonist, domperidone plays a role in the proximal gastrointestinal tract and has positive effects in improving and coordinating the dynamics of the stomach and duodenum, as well as a good regulating effect for restoring the function of pyloric sphincter. Domperidone can weaken isolated pyloric contraction and effectively reduce bile reflux, making it difficult to enter gastric lumen. Domperidone has good safety and minimal adverse reactions, only occasionally slight side effect such as abdominal spasm, dry mouth, dizziness headache and so on, which can disappear over a period. The results of this study showed that the total effective rate of the research group was 96.00 % and that of the control group was 80.00 %, and the treatment advantage of the research group was significantly greater p<0.05. fter treatment, the degree of improvement in several symptom scores in the research group was significantly better than that in the control group, p<0.05. Moreover, percent total reflux time, the number of refluxes and the number of refluxes lasting for more than 5 min all were significantly low in the research group, p<0.05. This fully indicates the effectiveness of domperidone in the treatment of reflux gastritis, which is consistent with previously reported studies[10-16].

In conclusion, domperidone has a good advantage in the treatment of reflux gastritis and is more effective than conventional treatment. Domperidone is a kind of drug to strengthen gastric motility. By promoting the secretion of dopamine, it strengthens gastrointestinal peristalsis and promotes digestion and clearance of gastric substance. Domperidone can also produce significant effects on the contraction of intestinal organs such as duodenum. During the treatment, the adverse reaction problems can be significantly reduced and the safety and reliability of the treatment can be improved. Currently, majority of patients suffering from gastritis do not know much about the disease, health education should be carried out, such as the diet instruction (avoiding spicy food, strong tea. liquor, eating a balanced diet and avoid overeating), strengthening daily exercise, forming good living habits, so as to reduce the onset of reflux gastritis and improve the quality of life. In addition, this study has a small sample size, and more studies are needed in the future to be fully demonstrated.