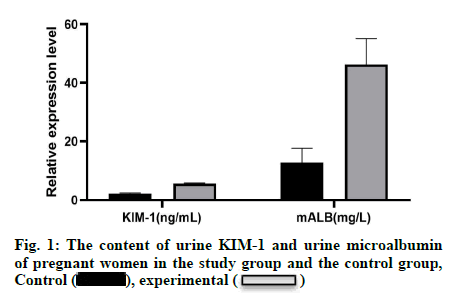 Fig. 1: The content of urine KIM-1 and urine microalbumin of pregnant women in the study group and the control group, Control ( 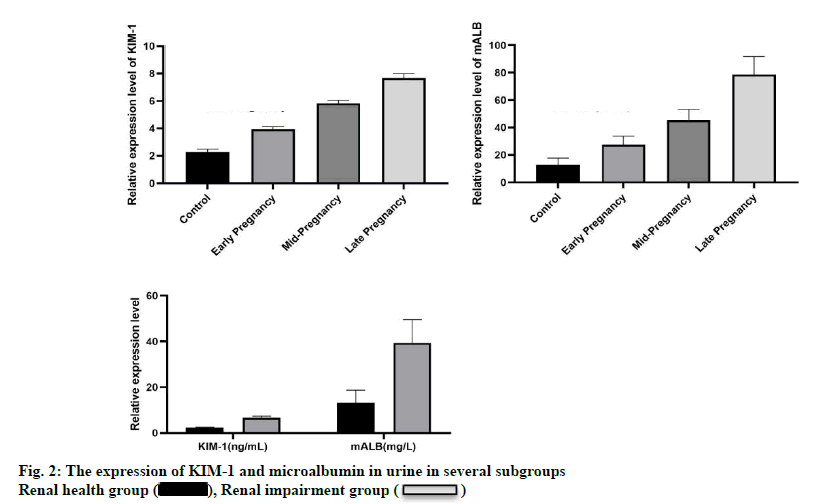 Fig. 2: The expression of KIM-1 and microalbumin in urine in several subgroups Renal health group (

The results showed that the BUN and hsCRP levels of the study group were higher than those of the healthy control group, and the eGFR was lower than that of the healthy control group (P<0.05). See Table 1. The results showed that urine KIM-1 and urine microalbumin levels of the study group patients were positively correlated with BUN and hsCRP (both p<0.05) and negatively correlated with eGFR, as shown in fig. 3. The results showed that the specificity and sensitivity of combined tests were significantly higher than those of single tests, with statistically significant differences (p<0.05), as shown in Table 2. In clinical practice, HDP is a very common type of disease and its incidence tends to increase year by year[8], which not only causes serious harm to pregnant women and perinatal babies, but also brings adverse effects on pregnancy outcomes[9]. During normal pregnancy, the pregnant woman’s physiological and metabolic pressure increases with fetal development, which will increase blood coagulation, renal blood flow and glomerular filtration rate (GFR), etc. Both of these factors will aggravate the kidney’s burden to varying degrees, leading to renal impairment in patients[10]. At present, the main clinical manifestations of HDP patients are gestational hypertension and pregnancy eclampsia. Pregnancy hypertension leads to increased systemic vascular pressure and pregnancy eclampsia leads to systemic spasm of small blood vessels, resulting in reduced perfusion due to systemic organs being compressed by blood pressure. Decreased renal vascular perfusion is likely to lead to obstacles on the elimination of its metabolites, which can induce imbalances in electrolyte regulation and disorders of acid base balance. Therefore, early diagnosis of kidney injury caused by gestational hypertension is of great significance for reducing obstetric complications and improving the prognosis of patients. The microalbumin in human urine, with low molecular weight and negative charge, can freely pass through the glomerular filtration membrane of the kidney and is all reabsorbed into the proximal convoluted tubule of the kidney. Once renal lesions occur, the microalbumin in urine cannot be completely reabsorbed by proximal convoluted tubules and the filtration rate of glomeruli will decrease, resulting in the presence of protein in human urine, namely proteinuria[11-13]. When renal damage occurs, it may be that when the expression of protein marker routine urinalysis is negative clinically, but the microalbumin can be expressed positive sensitively. In this study, we found that the content of microalbumin in the urine of the study group was significantly higher than that of the control group, indicating that renal lesions occurred in pregnant women, which may due to the damage on the glomeruli or tubules, or due to the obstruction of glomerular filtration rate caused by renal artery spasm. KIM-1 is a type I transmembrane protein that exists in the proximal tubules of the kidney[14]. Under normal circumstances, the kidney tissue hardly expresses KIM- 1. When the kidney is damaged, KIM-1 can be released in large quantities and enter the urine. Therefore, KIM- 1 in urine can be detected to indirectly assess the time and extent of kidney impairment. The latest research found[15] that KIM-1 can also be used as a functional molecule, the expression of it can be activated when the renal tubules are ischemia and hypoxia, mediating a series of signaling pathways to participate in renal injury repairmen. In this study, it was found that the content of KIM-1 in urine of the study group was significantly higher than that of the control group and the difference between the two was significant, suggesting that KIM- 1 can correctly indicate the symptoms of kidney injury. In addition, according to related research reports, KIM- 1 can be detected in urine within 2 h after the kidney injury occurs and there is no KIM-1 expression in tissues outside the kidney, which is an ideal marker for the diagnosis of kidney injury. Cr, BUN, and eGFR are common important indicators that reflect kidney injury, while hsCRP is a sign of the severity of inflammation in the body and can reflect the severity of kidney injury to a certain extent. In this study, the levels of BUN and hsCRP in the pregnancy induced hypertension group were higher than those in the healthy control group and the eGFR was lower than those in the healthy control group. The urine KIM-1 levels and urine microalbumin in the study group were positively correlated with BUN and hsCRP (both p<0.05), negatively correlated with eGFR, suggesting that urine KIM-1 and microalbumin can indirectly reflect the levels of Cr, BUN and eGFR. Due to the high stability of urine KIM-1 and specimen acquisition is easier than blood, urine specimens can be frequently retained for continuous detection when necessary. The results of this study also showed that the specificity and sensitivity of urine microalbumin of hypertensive patients in pregnancy in the study group were as high as 77.9 % and 75.3 %, which is close to that of urine microalbumin from normal pregnant patients and the difference was not statistically significant. It is particularly noteworthy that the study also found that the specificity and sensitivity of KIM-1 level combined with urinary albumin to detect renal impairment in gestational hypertension were up to 91.4 % and 93.7 %, significantly higher than that of any single indicator, with obvious clinical significance. Compared with the single use of KIM-1 and trace albumin, combined detection has a great advantage. The joint of KIM-1 and microalbumin is very necessary for early detection, which can dynamically monitor renal impairment in patients with gestational hypertension and has important application value. In conclusion, the detection of urine KIM-1 and microalbumin to determine the extent of renal damage in the early stage of HDP is conducive to early clinical treatment and has very important clinical importance for pregnant women and pregnancy outcomes. Fig. 3: Correlation between levels of urine KIM-1, microalbumin and BUN, eGFR, hsCRP of patients in the study group

Table 1: Comparison of Bun, Egfr and Hscrp Levels Between the Two Groups

Table 2: Comparison of the Sensitivity and Specificity of Kim-1 and Microalbumin in Urine

This work was supported by The Fifth Affiliated Hospital of Nantong University (Taizhou People’s Hospital).