Heart Failure (HF) is a group of syndromes with clinical manifestations of congestion in pulmonary circulation and systemic circulation and insufficient blood perfusion in organs and tissues due to various cardiac structural or functional diseases that lead to ventricular filling and impaired ejection function, insufficient cardiac output that fails to cover the metabolic requirements of tissues [1]. It is a disease that seriously endangers body’s health and is responsible for the vast majority of cardiovascular diseases [2]. Heart disease such as Myocardial infarction, hypertension, aortic stenosis, valve disease can cause the changes of hemodynamics and neuroendocrine and these changes tend to cause pathological changes of myocardial intracellular molecules or transfer pathways. Under the action of pressure load, the heart is often manifested as hypertrophy, myocardial remodeling and other changes. Cardiac remodeling is the basic mechanism of HF and the pathophysiological basis of HF progression [3].

Natriuretic peptide is a traditional biological marker of HF, which plays a very important role in clinical application. It can be divided into atrial natriuretic peptide (ANP) and B, C, D type natriuretic peptide, among which B-type natriuretic peptide is also called brain natriuretic peptide (BNP). Current studies suggest that BNP can directly reflect the prognosis of HF patients [4,5] and natriuretic peptide can be used as the “gold standard” for the diagnosis and prognosis of HF patients. But in clinical application because of various reasons, they still exist many defects, plasma BNP concentration is affected by many diseases like kidney failure, lung disease, primary aldosteronism, thyroid disease, obesity, etc. its concentration also differs in people with different ages or genders [6,7]. Most BNP in the blood is metabolized in the kidney; its renal clearance rate will decrease with the renal function declines, which will cause the BNP metabolism to be blocked in the body and the concentration increase. The high volume state caused by decreased renal function can also lead to the change of BNP concentration in the circulation. Therefore, a more specific and valuable biomarker is needed to monitor the occurrence and development of HF.

With the deep understanding of the pathogenesis of HF, micro ribonucleic acid (miRNA) has been found to play a crucial role in the pathophysiology of HF and has important value in the diagnosis, condition, treatment effect evaluation and prognosis of HF. miRNA is a type of endogenous non-coding ribonucleic acid (RNA) consisting of approximately 19-25 nucleotides. The expression of specific genes can be regulated in a sequence-specific manner; this gene participates in almost all biological processes such as cell growth, differentiation, apoptosis and metabolism [8]. Recently, it has been discovered that microRNA is stably present in peripheral blood and can be used as a biomarker for disease [9]. In recent years, a number of studies have shown that changes in the levels of various miRNAs can be detected in HF [6]. In this study, serum miRNA-1 level in patients with HF was studied to explore its relationship with cardiac function and HF prognosis.

94 patients with HF admitted to our hospital from December 2018 to December 2019 were selected as the study group. Inclusion criteria: Confirmed as HF according to the diagnostic criteria in the Guidelines for The Diagnosis and Treatment of HF formulated by the Cardiovascular Branch of the Chinese Medical Association in 2007; The New York Heart Association (NYHA) heart function classification is at II-IV; Doppler echocardiography showed that its left ventricular ejection fraction (LVEF) was less than 50 %; The course of the disease was more than 1 y and the condition was stable after treatment; No antiplatelet, anti-thrombotic drugs were taken within 2 w; There is no blood relationship between included subjects; Signed informed consent.

5 ml peripheral blood extracted from venous was centrifuged at 3000 r/min to separate the plasma. Then the cell fragments in the plasma were separated at 1200 r/min and the nucleic acids on the cell fragments in the plasma were further separated at 25000 r/min. The centrifuged plasma was stored in a refrigerator at -80° waiting for extraction. The RNA was extracted with the miRNEASY kit produced by Sigma company according to the instructions and fluorescent quantitative RNA reverse transcription combined with cDNA polymerase chain amplification technology (RT-PCR) were used for SNORD44 primer amplification and its quality identification. The extracted RNA was stored in the refrigerator at -80° for testing. Peripheral blood mononuclear cells samples: peripheral venous blood was mixed with Phosphate-buffered saline (PBS) solution at 1:1, spread the mixture on the lymphocyte separation solution, centrifuge it at 1500 r/min, the second liquid layer was collected and re-suspended with PBS after 4 liquid layers appeared in the centrifuge tube and centrifuged twice at 1000 r/min to collect cells for RNA extraction.

The reaction was repeated 3 times for each sample using a 96 well reaction plate and their mean value was taken. The all-in-Pneumatic NAQRT-PCR assay kit produced by Shanghai Biyantian company was used to amplify the miRNA with a Roche LightCycler 480II amplification analyzer. The details were as follows: pre-denaturation at 95° for 10 min, denaturation at 95° for 10 s, annealing at 60° for 20 s, amplification at 10 s at 75° for 45 times, amplification at 75° for 5 min. MiRNA expression levels were determined by using 2-ΔΔCT calculated by RNU6-2.

SPSS 20.0 statistical software was used for data analysis. Analysis of variance and T test were used for measurement data. The χ2 test was used for count data. p<0.05 was considered statistically significant. 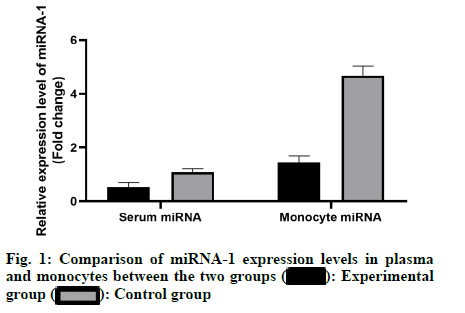 Figure 1: Comparison of miRNA-1 expression levels in plasma and monocytes between the two groups 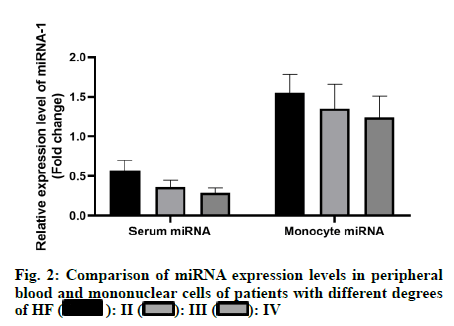 Figure 2: Comparison of miRNA expression levels in peripheral blood and mononuclear cells of patients with different degrees of HF 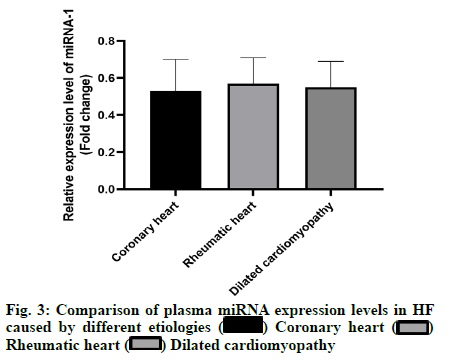 The results showed that miRNA-1, LVEF and LVEDD were independent risk factors for HF, with statistically significant differences (p<0.05), as shown in Table 2.

With the aging of the population and the development of medical technology, the treatment level of myocardial infarction has increased and the prevalence of HF has been on the rise, which has become a serious threat to the health of middle-aged and elderly people. Patients with HF have ventricular filling and abnormal ejection functions, which are clinically manifested as fatigue, fluid retention and dyspnea [3,5]. HF can be divided into 4 stages, including pre-HF, pre-clinical HF, clinical HF, refractory end-stage HF [10-12]. In clinical practice, plasma natriuretic peptide is mainly used as an auxiliary indicator for the diagnosis of HF, but the diagnostic effect is not ideal [13].

MiRNA is a highly conserved non-coding small RNA with a long metabolic cycle and good stability, which is suitable for disease markers. MiRNAs can degrade mRNA of target genes or indirectly inhibit post-transcriptional translation of target genes by binding to specific paired sites, thus regulating gene expression levels. In addition, miRNAs can stimulate the expression of certain target genes [14,15]. Mi-RNAs have multiple biological functions. They are involved in a series of processes such as cell differentiation, proliferation and apoptosis and are closely related to hormone secretion, cardiovascular disease, diabetes and tumorigenesis [15-17]. Human miRNA-1 is associated with inflammation. In this study, the expression level of miRNA-1 in plasma and monocytes of HF patients in this research decreased compared with that in healthy people and the decrease is more obvious as the degree of HF worsens, suggesting that miRNA-1 may be released through damaged myocardial tissue and monocytes. The differential expression of miRNA-1 between patients with HF and healthy people makes it expected to be a marker for the antidiastole of HF.

In the process of clinical diagnosis and treatment, application of HF related biomarkers and is very vital for timely diagnosis. Zhang et al. [19] showed that the overexpression of miRNA-1 was negatively correlated with LVEF in patients with myocardial infarction and speculated that miRNA-1 had a predictive value of the acute myocardial infarction occurrence in patients with HF. In clinical, the recommended markers for the evaluation of myocardial cell strain are mainly BNP [20], which is mainly a polypeptide neurohormone secreted by ventricular myocytes under the stress state and transformed from the precursor of B-type natriuretic peptide [21]. Myocardial ischemia and hypoxia can rapidly activate the natriuretic peptide system, increase the ventricular wall tension promote the secretion of BNP. BNP can bind to the natriuretic peptide receptor A to produce a series of effect like diuresis and sodium discharge increase, arterial vasodilation, inhibiting the growth of cardiovascular smooth muscle cells and inhibiting the ardiovascular remodeling. The level of BNP in plasma fluctuates with the disease state, which is obviously increased at the fact that the ventricular cavity is abnormally enlarged, the body volume load is increased or the excretion is reduced at the stage of renal failure. Therefore, BNP has a compensatory protection function for the body. But it is worth noting that some factors will affect the level of BNP, such as dysfunction in right ventricular and heart valve and pulmonary hypertension. At present, it is particularly important to explore new potential biomarkers for the diagnosis of HF, fully evaluation of the risk level of HF and to predict its prognosis.

In this study, plasma miRNA-1 expression level of HF patients was compared with BNP, LVEDD and LVEF, indicating that it was positively correlated with BNP and LVEDD and negatively correlated with LVEF, which was mutually corroborated with previous research. Combined with this study, it was further shown that plasma and monocyte miRNA-1 expression levels were low in HF patients, suggesting that changes in miRNA-1 level can reflect the degree of ventricular remodeling in HF patients and can be used as an important indicator to predict HF.

In summary, miRNA has the characteristics of high stability. The expression level of miRNA-1 shows a downward trend in patients with HF, which is significantly different from healthy people. The expression level of miRNA-1 is related to BNP, LVEDD and LVEF in patients with HF, suggesting it is a independent risk factors for HF, thus miRNA-1 is expected to be a marker for the diagnosis and evaluation of HF. However, due to high cost, multiple cycles and low concentration, miRNA detection is prone to large errors. Meanwhile, miRNA is easy to be degraded, which is tending to cause inconsistency between detection results and reality [20,21]. Besides, the role of miRNA in diseases is not fully understood and many problems still need to be further studied and resolved.