Primary lung cancer is one of the malignant tumors with the highest morbidity and mortality in the world, accounting for 18 % of cancer related deaths. According to relevant literature predictions, the annual incidence of lung cancer in our country will exceed 1 million by 2025 and it will become the world’s largest lung cancer country [1]. With the continuous update of various comprehensive treatment methods, the clinical treatment effect of lung cancer has improved compared with the past, but the overall prognosis is still poor and the 5 y survival rate is only about 10 % [2]. Non-Small Cell Lung Cancer (NSCLC) is one of the main types of lung cancer. It is easy to be ignored in the early stage. Most patients progress to the middle and advanced stages when they see a doctor. Palliative treatment is often used. The 5 y survival rate is less than 20 % and the prognosis is poor [3]. Recurrence and metastasis are the main reasons for the failure of NSCLC treatment. Therefore, it is of great significance to study the related mechanisms and prognostic factors of recurrence and metastasis. Pro-Platelet Basic Protein (PPBP) belongs to the CXC chemokine subfamily, which can effectively promote angiogenesis, tumor occurrence and metastasis which is abnormally expressed in melanoma and pancreatic cancer and can regulate cell proliferation, migration and invasion [3-5]. Transcription Factor Activating enhancer binding Protein 4 (TFAP4) is a member of the basic helix loop-helix transcription factor family. It plays an important role in cell proliferation, differentiation and apoptosis, promote the migration and invasion of gastric cancer cells [1,4]. However, there are few studies on the relationship between PPBP and TFAP4 and clinicopathological characteristics in NSCLC patients at this stage and the impact on the prognosis is still unclear. This study aims to explore and analyze the expression of PPBP and TFAP4 genes in NSCLC and its prognostic value.

A total of 94 NSCLC patients undergoing lung cancer resection were selected from January 2015 to January 2016 in our hospital and all the patients met the diagnostic criteria for NSCLC and were pathologically diagnosed as NSCLC after surgery.

In this study we collected NSCLC tumor tissue specimens and normal lung tissue specimens 5 cm away from the edge of the cancerous tissue. There were 53 males and 41 females, aged 47-75 (61.39±7.22) y old.

Detection methods: All participants in the group were biopsied to collect NSCLC tissue samples before treatment, after admission and put them in liquid nitrogen for freezing. There was no history of NSCLC related treatment before the collection of the samples. Take 100 mg specimens from liquid nitrogen, quickly grind them to powder in a mortar, add 1 ml Trizol reagent and transfer to 1.5 ml Eppendorf (EP) tube, repeatedly pipette until fully dissolved and leave it at room temperature for 10 min. Add 0.2 ml of chloroform, fully shake at low temperature for 10 min, place at room temperature for 5 min, centrifuge at 12 000 r/min for 15 min. It can be seen that the sample is divided into 3 layers, carefully pipette the upper water phase into a new centrifuge tube and add an equal volume of isopropanol. After mixing well, place at room temperature for 10 min, centrifuge at 12 000 r/ min for 10 min, discard the supernatant, add 1 ml of 70 % ethanol with 0.1 % Diethyl Pyrocarbonate (DEPC) water, centrifuge at 7500 r/min for 5 min and discard the supernatant. The inverted EP tube absorbs moisture and air dry for 10 min. Add about 40 μl of 0.1 % DEPC water to dissolve the precipitate, mix by pipetting and store at -80°. Before reverse transcription, take 2 μl of total RNA solution and measure the Optical Density (OD) value with an ultraviolet spectrophotometer at 260 and 280 nm wavelengths to verify the purity and concentration of RNA. OD value 260/280 between 1.80 and 2.00 meets the requirements. Take 10 μl of total RNA solution, add 1 μl oligo (Deoxythymine (dT)) (0.5 μg/μl), 1 μl ribonuclease (RNase) free double distilled water (ddH2O), incubate at 65° for 5 min, then keep in ice bath for 30 s, add 5×reaction buffer 4 μl , Moloney murine leukemia virus (M-MuLV) reverse transcriptase 1 μl, deoxynucleotide triphosphates (dNTPs) mix (10 mmol/l) 2 μl, RNase inhibitor (20 U/μl) 1 μl, the primers are shown as follows: β-actin: forward: 5'-TGACGTGGACATCCGCAAAG-3', reverse: 5'-CTGGAAGGTGGACAGCGAGG-3' (205 kb), PPBP: forward: 5'-AGTACCGACCCATCCAGAC-3', reverse: 5'-GCCGTTCACCTGTATGCAC-3' (295 kb), TFAP4: forward: 5'-GCTGAGTCTCGGGGGTTAGT-3', reverse: 5'-GTGCCCTCTTTGCAACATTT-3' (128 kb). The reaction system includes primers, 4 dNTPs, Thermus aquaticus (Taq) DNA polymerase, target DNA and PCR reaction buffer total 20 μl and reaction conditions, 95° pre-denaturation for 3 min, denaturation at 95° for 5 s, annealing/extension at 60° for 31 s, dissolution curve analysis at 95° for 15 s, 60° for 1 min and 95° for 15 s, a total of 42 cycles. 2-ΔΔCT represents the relative expression of the detected gene. Fig. 1: The expression of TFAP4 and PPBP proteins in NSCLC tissues and adjacent tissues

Table 1: The Expression of Tfap4 and Ppbp Proteins in Nsclc Tissues and Adjacent Tissues

Clinicopathological characteristics of patients with different TFAP4 mRNA expression levels are observed. There was no statistically significant difference between the two groups in age, gender and pathological type (p>0.05); the TFAP4 mRNA high expression group had a statistically significant difference in tumor diameter, TNM stage, lymph node metastasis ratio and degree of differentiation compared with the low expression group, academic significance (p<0.05) as shown in Table 2.

Clinicopathological characteristics of patients with different PPBP mRNA expression levels are observed. There was no statistically significant difference between the two groups in age, gender and pathological type (p>0.05); the PPBP mRNA high expression group had a statistically significant difference in the largest tumor diameter, TNM stage, lymph node metastasis ratio and degree of differentiation compared with the low expression group academic significance (p<0.05), as shown in Table 3.

Table 4: Relationship Between PPBP and TFAP4 mRNA in Cancer Tissues And Clinicopathological Characteristics 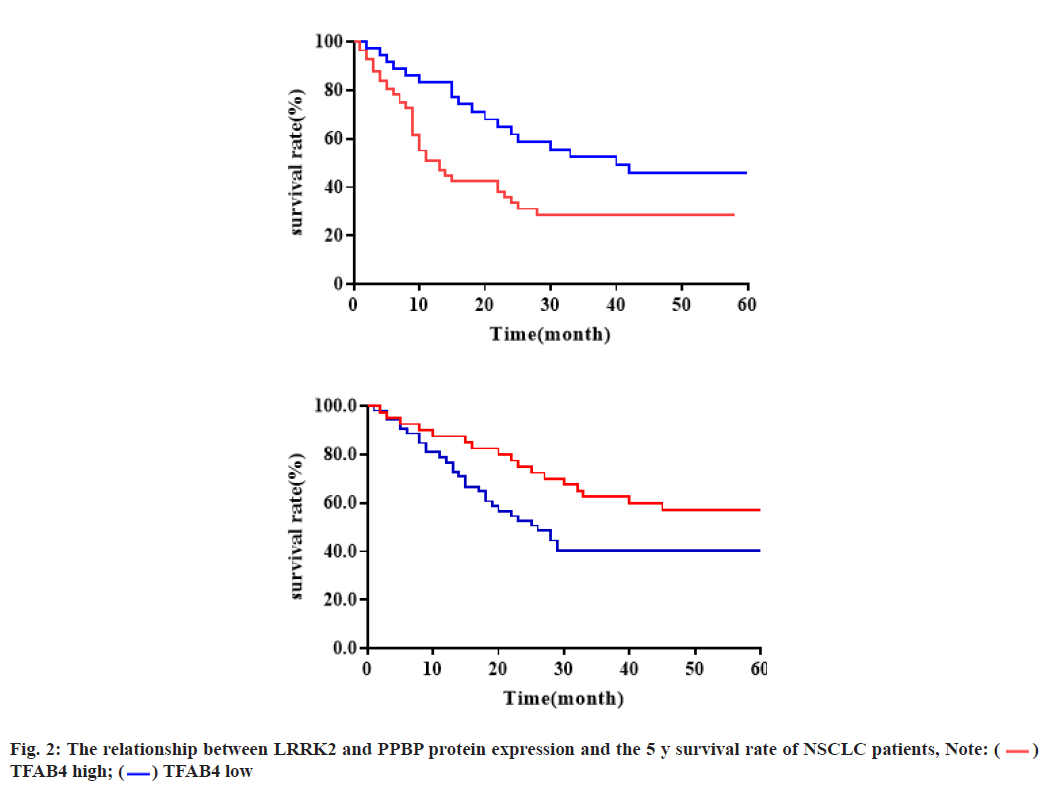 Fig. 2: The relationship between LRRK2 and PPBP protein expression and the 5 y survival rate of NSCLC patients, Note: (

NSCLC has the characteristics of high incidence and poor prognosis. Despite the continuous advancement of existing diagnosis and treatment technologies, the survival rate of NSCLC patients has been improved to a limited extent. Therefore, studying the relevant mechanisms of NSCLC at the molecular level and providing ideas for targeted therapy is crucial to improving the prognosis of patients.

PPBP belongs to the CXC chemokine subfamily, which can effectively promote angiogenesis, tumor occurrence and metastasis. The expression of PPBP is increased in a variety of cancer cells and their expression in cancer tissues is higher than that in adjacent tissues but their specific mechanism of action is not yet clear [6]. Molina et al. studies have shown that PPBP is low expressed in NSCLC tissues and cell lines [7]. Using small RNA technology to target PPBP can affect cancer cell proliferation and invasion, suggesting that PPBP is related to the clinicopathological characteristics of NSCLC and may affect patient’s prognosis. This study showed that the maximum diameter of the tumor, TNM stage, lymph node metastasis ratio and maximum tumor diameter in the PPBP mRNA high expression group were significantly different from those in the low expression group. They were negatively correlated with TNM stage, lymph node metastasis and tumor maximum diameter and correlated with the degree of differentiation. It is positively correlated, suggesting that PPBP mRNA expression can affect tumor stage, size, metastasis and differentiation of NSCLC patients, so it is closely related to the prognosis. Up-regulation of PPBP mRNA expression may help to improve the clinicopathological characteristics and prognosis of patients and provide gene targeted therapy. Another report showed that, the positive rate of PPBP in NSCLC tissues was significantly lower than that in adjacent tissues [8]. Patients with lymph node metastasis and TNM stages I-II had lower levels of PPBP mRNA than those without lymph node metastasis and TNM stages III-IV. The conclusion of this study is consistent with it. The prognostic mechanism of PPBP may be as follows: PPBP can specifically bind to the promoter region of matrix metalloproteinase 28 through transcription and regulate the expression of matrix metalloproteinase 28, thereby inhibiting the invasion and metastasis of cancer cells [9,10]. PPBP can promote the apoptosis of cancer cells by regulating oxidative stress [11,12]. At the same time, this study found that the survival curve of patients with high expression of PPBP mRNA is better than that of patients with low expression, which directly confirms that high expression of PPBP mRNA is beneficial to the improvement of prognosis.

TFAP4 can recognize and bind DNA [13]. Research by Yang et al. showed that TFAP4 is highly expressed in colorectal cancer [14]. Silencing the expression of TFAP4 can inhibit the invasion and migration of colorectal cancer cells, suggesting that TFAP4 is related to the biological behavior of colorectal cancer, but the reports in NSCLC are relatively high [15,16]. This study found that the maximum tumor diameter, TNM stage, lymph node metastasis ratio and tumor maximum diameter in the high expression group of TFAP4 mRNA were significantly different from those in the low expression group. TFAP4 mRNA was positively correlated with TNM staging, lymph node metastasis and tumor maximum diameter and was correlated with the degree of differentiation. There is a negative correlation, suggesting that inhibiting the expression of TFAP4 mRNA can help to improve the clinical characteristics and prognosis of patients. Studies have reported that compared with patients with low TFAP4 expression, the overall survival time of patients with colorectal cancer with high TFAP4 expression is significantly reduced, which is an independent influencing factor of overall survival time, which supports the conclusion of this study [17,18]. Combined with related literature, TFAP4 can regulate the expression of multiple genes in the epithelial-mesenchymal process, loss of cell connection and polarity and facilitate tumor cell invasion and TFAP4 is involved in the regulation of cell proliferation and is involved in cell division and proliferation [19,20]. In the Growth 2 phase (G2) stage, TFAP4 can cause chromosomal misalignment and multipolar spindles, which ultimately activates the DNA damage response, leading to the removal of cell cycle interruption and continued cell proliferation, thereby promoting the proliferation of cancer cells and lymph node metastasis [21,22]. At the same time, this study showed that patients with low TFAP4 mRNA expression had better survival curves than those with high expression, directly confirming that low TFAP4 mRNA expression can improve the prognosis. The shortcomings of this study are that the sample size is small and the acquisition of cancer tissues is invasive, which needs to be expanded in the future for verification and improvement.

The expression of PPBP and TFAP4 genes in cancer tissues of NSCLC patients is significantly correlated with TNM staging, lymph node metastasis, tumor maximum diameter and degree of differentiation, which can affect the prognosis of patients. Targeting PPBP and TFAP4 genes may help to improve after intervention.

This work was supported by the "Six One Project" Top Talent Research Project of Jiangsu Commission of Health (No. LGY2018033).

The authors reported that there is no conflict of interest.