The Relationship between Human Papillomavirus Infection and Cervical Precancerous Lesions

HPV is an epitheliophilic virus widely distributed in humans and other vertebrates with strict host and tissue specificity [5,6]. In recent years, many researchers have studied the correlation between these. HPV is the general name of a group of viruses, whose morphology is similar, but DNA restriction endonuclease maps are different and the antigenicity of nuclear shell proteins is different [7]. HPV is a group of deoxyribonucleic acid (DNA) viruses in subgroup A of the family Lactovaceae. It is highly species-specific and epitheliophilic. More than 140 subtypes of HPV have been found and about 40 subtypes can infect the reproductive system. According to the different risk of HPV in inducing malignant tumors of the reproductive tract, HPV can be divided into 2 groups, the low-risk and the high-risk. The highrisk HPV (HR-HPV) subtypes include HPV16, 18, 31, 33, 35, 39, 45, 51, 52, 56, 58, 59 and 68, which often cause high-grade cervical intraepithelial neoplasia and other malignant lesions [8,9]. The cervical intraepithelial neoplasia caused by HR-HPV infection is a long-term and reversible precancerous lesion. Early intervention of cervical intraepithelial neoplasia can effectively prevent cervical cancer [10]. Therefore, not only in the prevention of cervical diseases, but also in guiding the clinical treatment of cervical diseases, evaluating the prognosis of cervical diseases, tracing the possibility of recurrence after treatment of cervical diseases, HPV detection has become an effective means and plays an important role [11]. Therefore, the research and prevention of this malignant tumor is a very necessary subject.

About 1021 women were randomly selected from January 1, 2010 to December 31, 2018 in the Second Hospital of Nanjing. The age ranged from 17 to 59 y, with an average age of 37.3±5.2 y. All cases were examined by HPV-DNA + liquid-based thin-layer cytology test (TCT). If the test result is HPV (+), the genotype and load of HPV needed to be analyzed. If HPV16 (+) is detected, its integration status needed to be analyzed. If there are abnormalities, cervical lesions should be diagnosed strictly according to the 3-step screening scheme for cervical disease diagnosis. The informed consent signed by the patients or their family members was obtained and this study was approved by the medical ethics committee of The Second Hospital of Nanjing.

All patients met with the following criteria, patients with an initial history of sexual life of 3 y or more, no gynecological examination, vaginal medicine and cervical treatment in the past week, no previous history of other tumors, immunosuppressive diseases, use of immunosuppressive drugs, hysterectomy or cervical surgery, radiotherapy or chemotherapy and no pregnancy history for the near future. The patients have been informed and agreed to take relevant examinations without losing the interview. Exclusion criteria were pregnant women and patients with cervical cancer and precancerous lesions in the past. Patients who have undergone cervical loop electrosurgical excision procedure, conization and hysterectomy were excluded. Patients who have a history of pelvic radiotherapy or those on steroid hormone therapy were excluded.

Sterile cotton swab paper was used to gently wipe the excessive secretions of cervical mouth. The special HPV collector was inserted into the cervical canal, rotated clockwise for three cycles for 10 s, slowly removed and placed in the special sampling tube marked with the code of the subject. The cap was tightened and the test tube was placed in a refrigerator at -20° for HR-HPV detection.

HR-HPV is detected using the HC-II method of Digene Company, USA. A total of 13 HR-HPV genotypes (HPV16, 18, 31, 33, 35, 39, 45, 51, 52, 56, 58, 59 and 68) were detected. The light generated by the sample was measured by DML2000 microplate reader and expressed as relative light unit (RLU). Positive control (PC) was established, which contained 1 pg/l HPVDNA and about 5000 copies of HPV gene. The results were analysed using the ratio of RLU to standard positive control (RLU/PC). When RLU/PC<1.0, HPVDNA is negative, that is, HR-HPV infection is negative. When RLU/PC>1.0, HR-HPV infection is positive. Since the RLU value is proportional to the DNA contained in the sample, the higher the ratio is, the higher the HPVDNA load in the sample. Therefore, the RLU/PC value of the sample provided a semi-quantitative HPV load value. The RLU/PC values of HPV-DNA positive patients were divided into low load (1-10), moderate load (11-100) and high load (>100).

Reverse dot hybridization refers to the amplification of target nucleic acid by biotin-labeled primers and the hybridization of products with probes fixed on nylon membrane. A single hybridization reaction can detect multiple target sequences. DNA reverse dot blot hybridization combined with professional digital gel imaging and analysis system was used to detect HPV genotypes by P value (integral optical density difference). The cervical exfoliated cells sampler was inserted into the cervical canal to brush the cells and placed in a special specimen preservation solution. The HPV genotyping kit (Zhongshan Daan Gene Company), which can detect 15 HR-HPV genotypes (16, 18, 31, 33, 35, 39, 45, 51, 52, 53, 56, 58, 59, 66, and 68) and four low-risk HPV genotypes (6, 11, 43, and CP8304) was used. People infected with two or more types of HPV are defined as multiple HPV infections.

According to the results of the typing test, the upstream and downstream primers of E2 and E6 were added to the system respectively. First, the total DNA was boiled for 7 min in boiling water at 100° and then cooled rapidly. Then the PCR amplification reagent was added to the reaction system. Then 10 μl of the PCR amplification product was sampled on 1.5 % agarose gel and the control voltage was set at 60-80 V. The electrophoresis was carried out for 50 min and UV Gel imaging system was used with Scion lmage4.0 electrophoretic image analysis software to measure and analyze the gray value of the electrophoretic strip area of the amplified products. The ratio of E2 to E6 was calculated and a set of data was obtained. The 95 % reference value range of the data was analyzed. The lower limit was 0.80. When the samples were measured 3 times, the mean value of E2/E6 was taken as the number of copies. When the E2/ E6 ratio was greater than or equal to 0.80, HPV16 virus existed in a free state. When the E2/E6 ratio was less than 0.80, the free and integrated HPV16 virus existed and when the E2/E6 ratio is 0, the HPV16 virus fully integrated.

SLC-2000 electronic colposcope (Jinkuwei, Shenzhen) was used to observe cervical color, blood vessel and white spot with magnification of 20-40 times. Cotton balls dipped in 5 % acetic acid solution were applied on the cervical surface, waiting for about 1 min to observe the boundary, color and blood vessel changes of lesions dynamically. The surface of cervix was coated with cotton ball dipped in 2 % iodine solution to observe the distribution and situation of different iodine staining areas of cervix.

Colposcopy was performed for HPV positive patients and/or ASC-US positive patients. Cervical biopsy was performed for those with abnormal findings under colposcopy. The specimens were sent for pathological examination. If cytology is positive and no abnormal lesion or image is unsatisfactory under colposcopy, cervical biopsy or curettage at 3:00, 6:00, 9:00 and 12:00 were performed. The operation was performed by a specialist gynecologist and colposcopist. With pathological diagnosis as the gold standard, the pathological examination of cervical biopsy specimens was completed by 2 senior pathologists in the pathology department of The Second Hospital of Nanjing. SPSS22.0 statistical software was used and the measurement data were expressed as mean±standard deviation. One-way ANOVA is used to compare data among groups. 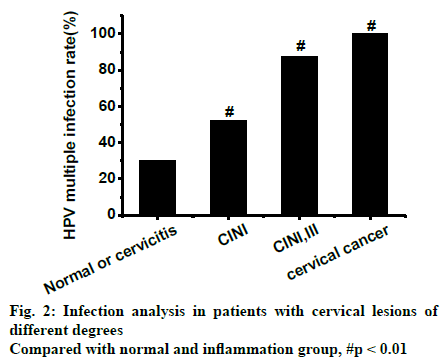 Table 1: Analysis of HPV Infection in Women of Different Ages 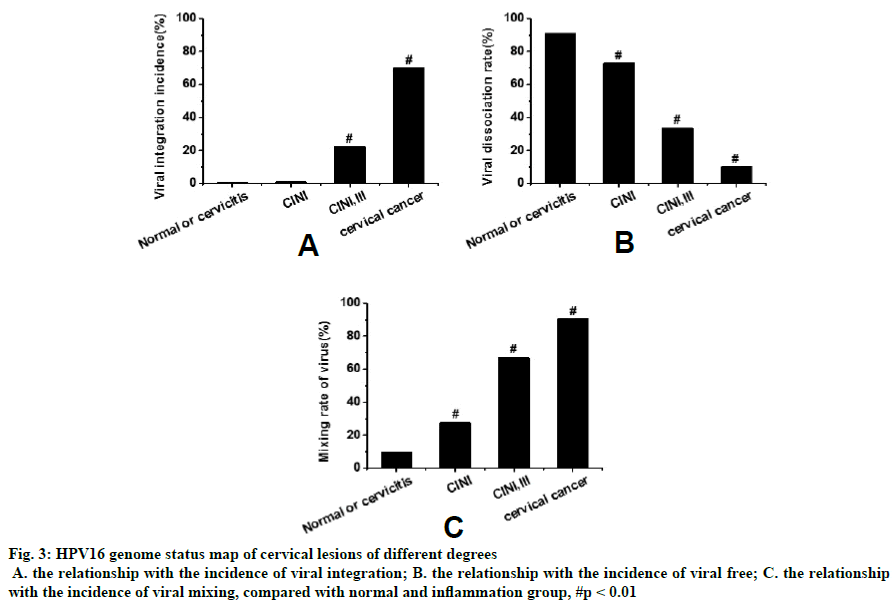 In conclusion, by exploring the relationship between HPV infection and cervical precancerous lesions, it was found that the degree of cervical lesions could be controlled by interfering with the integration of HPV16 virus in cervical tissue cells and the results were as expected. It provided experimental evidence for HPV treatment of cervical precancerous lesions. However, some shortcomings in this study such as smaller sample size and data, did not allow to make prediction on the mechanisms involved and it is necessary to increase data size to further explore mechanisms involved.