In the daily emergency work, especially in the first line emergency scene, the treatment conditions are often relatively simple. Due to the lack of effective diagnosis of the patient’s condition, medical staff only rely on subjective judgment and clinical experience for diagnosis and treatment, which may cause some patients to miss the best treatment time and treatment method [1] and the severity of the patient’s condition is easy to be ignored, which will directly affect the next step of treatment for patients. With the aggravation of aged society in China, the number of elderly patients in emergency treatment has increased significantly [2]. Among the critically patients in the emergency room of each hospital, the proportion of elderly patients is the highest. As the elderly patients are older, more basic diseases, weak resistance, rapid changes in the condition, there is a potential risk [3]. Therefore, it is extremely important for the prognosis of patients to accurately evaluate the patient’s condition and quickly take reasonable and effective measures, which is also a subject that clinical medical personnel need to face.

Modified Early Warning Score (MEWS) was proposed to detect “potentially critical illness” so that medical staff can intervene in time to improve clinical prognosis. The United Kingdom formulated a unified early warning score in 2012, named the National Early Warning Score (NEWS), as a standardized indicator to determine the severity of the disease and monitor changes in the disease; it has been widely promoted in China and UK. There are many elderly patients. This article mainly discusses the predictive value and feasibility of MEWS and NEWS on the outcome of elderly patients in China.

According to the actual outcome of patients, they were divided into intensive care unit (ICU) group (patients died during emergency stay and admitted to ICU) and general ward group (patients discharged from hospital, outpatient treatment and transferred to emergency or specialized general ward). The end point was 30 d and the prognosis included death or survival. Analyze the influencing factors and independent influencing factors of elderly critical illness and evaluate the effect of this score on the prognosis of elderly patients with emergency by receiver operating characteristic curve (ROC curve).

Before conducting investigations and studies, medical staff were trained and instructed. Patients and their families signed a consent form for treatment and care and a designated person was responsible for tracking the patient’s outcome and recording prognostic observation indicators. The data was entered by two persons, reviewed and proofread.

SPSS 20.0 was used to process the data. T test was used to compare the completion time of nursing measures between the two groups. The statistics of patients, family members and doctors to nurses was compared by chi square test. p<0.05 was considered to be statistically significant.

There were 938 elderly patients (90.45 %) in the survival group and 96 (9.55 %) in the death group. There were significant differences in consciousness, mode of admission and renal failure between the two groups (p<0.05). The pulse, respiratory rate, respiratory support, MEWS score and NEWS score of death group were higher than those of survival group, SpO2 was lower than that of survival group and the difference was statistically significant (p<0.05). However, there were no significant differences in gender, age, systolic blood pressure, pain and body temperature between the two groups (p>0.05), as shown in Table 4.

Table 4: Comparison of Indexes Between Survival Group and Death Group

The comparison of MEWS score and NEWS score in judging the prognosis curve and prognosis resolution of emergency critical patients are shown in fig. 1 and Table 5 respectively. The Area under curve (AUC), ROC of MEWS score was 0.886, the 95 % confidence interval was 0.872 to 0.900, the cutoff point was >4, Youden index was 0.638, the sensitivity was 76.00 % and the specificity was 87.78 %. 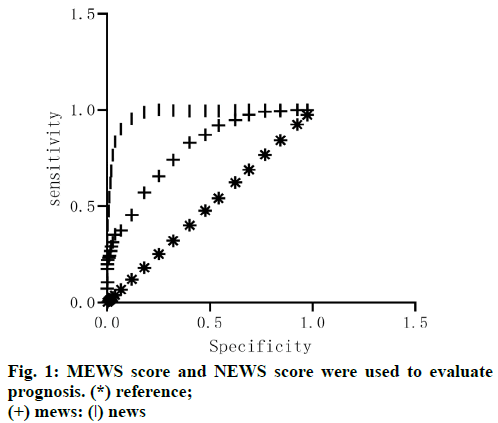 With the rapid development of medical technology and health service in China, it is necessary to improve the clinical treatment effect in emergency treatment. Objective, accurate and effective assessment of the condition and severity of emergency patients, especially for elderly patients with potential death risk, plays a key role in improving the prognosis and quality of life of patients [4-6]. In order to avoid misdiagnosis and even medical disputes caused by doctors’ clinical experience in emergency treatment, some scholars have introduced a variety of disease risk assessment systems and methods. At present, there are many clinical disease risk assessment methods, including acute physiology and chronic health assessment II score [7], rapid acute physiology score [8], rapid emergency internal medicine score [9]. However, the above methods have limitations such as more evaluation contents and longer evaluation time and are not practical for emergency patients [10].

On the basis of the original, the NEWS added the score of SpO2 and oxygen absorption made slight adjustments in respiratory rate, body temperature, blood pressure and pulse rate. Our results showed that NEWS can effectively evaluate the condition changes of elderly patients with acute and severe emergency, especially in the aspect of emergency outcome. In this study, NEWS and MEWS were used to evaluate the outcome and prognosis of elderly critically ill patients in emergency department. The results showed that NEWS and MEWS in ICU group and death group were higher than those in general ward group and survival group, which was consistent with the existing research results [11-13]. Therefore, as a new scoring model, NEWS has been recognized and adopted by clinical medical staff at home and abroad for its simple calculation and strong operability. In particular, it has achieved good application effect in the field of emergency and can well predict the condition and prognosis of emergency patients [14].

In conclusion, the NEWS score is closer to the actual situation of elderly patients and can reflect the severity and changes of elderly patients more accurately and comprehensively than MEWS score. In addition, NEWS has a stronger ability to predict the prognosis of patients, which can effectively help emergency medical workers to take timely intervention measures and ultimately achieve the purpose of reducing the mortality of elderly patients and improving their quality of life.

This work was supported by the Xuanwu Hospital, Capital Medical University. 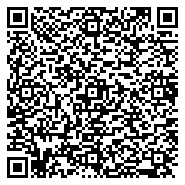