The present study was aimed to investigate the value of serum amyloid A in the early diagnosis of infection in patients with extracorporeal circulation and to evaluate the prognosis of patients. This was a prospective observational study. Patients admitted to the intensive care unit after cardiopulmonary bypass surgery between January 2017 and January 2019 were continuously collected. Daily blood serum amyloid A and traditional inflammatory markers (white blood cell, C-reactive protein and procalcitonin) were continuously monitored 1 day before surgery and 3 days after surgery. The efficacy of serum amyloid A and traditional inflammatory indicators in the early diagnosis of infection was assessed by receiving operating characteristic curve, and the efficacy of serum amyloid A in predicting the prognosis of patients was assessed by multivariate logistic regression analysis. A total of 150 patients admitted to ICU after extracorporeal circulation was included in the study period. There were 58 patients with perioperative infection and 92 patients in the non-infected group. There were 18 patients in the death group, accounting for 12 %. Serum amyloid A and traditional inflammatory indicators were increased in all patients on the first day after surgery compared with that before surgery, but in the non-infected group and the survival group, the decrease rate was significantly faster than that in the infected group and the death group within three days after surgery, p<0.05. According to ROC curve analysis, the diagnostic efficacy of perioperative infection was serum amyloid A, C-reactive protein, procalcitonin and white blood cell respectively, and the sensitivity and specificity were 84.48 and 86.96, 79.31 and 89.13, 65.52 and 98.91, 89.66, and 71.74 %, respectively. Multivariate logistic regression analysis indicated that the blood serum amyloid A level on the first day after surgery was an independent risk factor for hospitalization and death, OR was 1.49 (95 % CI was 1.27-2.96, p<0.01). Serum amyloid A could be used for early diagnosis of perioperative infection after extracorporeal circulation, and is an independent risk factor for prognosis of patients, and its value is better than traditional inflammatory indicators.

Cardiopulmonary bypass patients who met the inclusion criteria were collected in this study. Clinical information collected were patient’s gender, age, preoperative diagnosis, cardiac function grading, SAA, WBC, CRP, PCT, bedside chest X-ray, B-mode ultrasound, blood culture, urine routine and so on, 1 d before operation and 1, 2 and 3 d after operation. Patients with perioperative infection or not were judged by a group of physicians with more than two deputy chief physicians in the ward after comprehensive disease information and antiinfection program was formulated. If there were difficulties in diagnosis, the specialists in nosocomial infections department should be consulted in time. CRP was detected using Hitachi 27060 (Brahms Company of Germany), the PCT detector and kit from Brahms Company of Germany (Brahms PCT-Q), and SAA was detected by immune transmission turbidimetry (Hitachi 7170A Automatic Biochemical Analyzer). 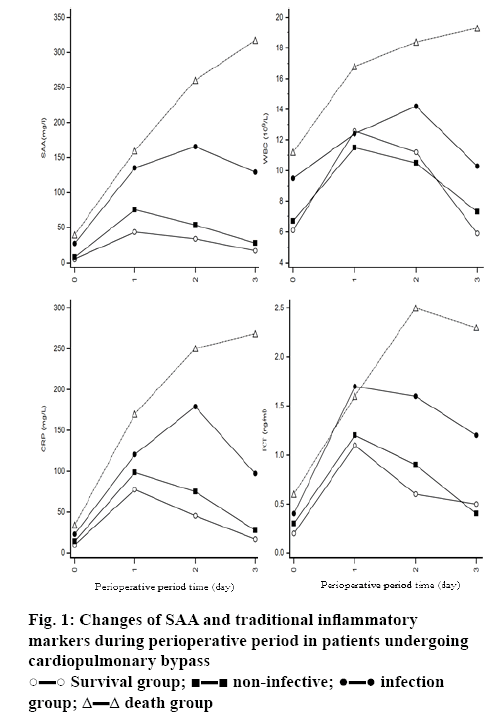 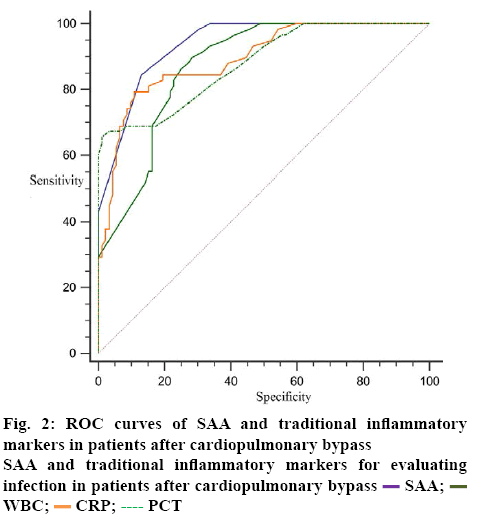 Gender, age, preoperative diagnosis and preoperative cardiac function were graded. APACHEII score was performed within 24 h of admission to ICU. APACHEII score within 24 h after admission to ICU, infection, SAA and traditional inflammatory markers on the first day after operation were recorded. Serum SAA and traditional inflammation indices on the first day after operation were taken as covariates. Multivariate logistic regression analysis was performed for infection and mortality. The results showed that the level of SAA in blood on the first day after operation was an independent risk factor for hospitalization mortality. OR was 1.49 (95 % CI is 1.27-2.96, p<0.01). In addition, patients’ age, APACHEII score and cardiac function grading were also risk factors for hospital mortality (Table 2).

SAA is an acute phase reactive protein, highly conserved in vertebrates and belongs to the heterogeneous proteins of apolipoprotein family with a fraction of 13581. The human SAA gene is located on chromosome 11, and the liver is the main site for SAA synthesis. In addition, a small part of the human SAA gene is synthesized outside the liver[9-11]. Macrophages and monocytes are activated to release inflammatory mediators IL-1 and TNF-α, which then stimulate stromal cells to express inflammatory mediators IL-6, IL-8 and monocyte chemokines when the body is subjected to acute stress such as infection, burns, trauma and surgery. These inflammatory mediators, especially IL-1 and IL-6, enter the blood circulation and are transported to the liver, which stimulates the synthesis of SAA by hepatocytes and hepatic macrophages. At this time, the level of SAA in circulating blood increases significantly[12,13].

SAA in circulating blood acts as a chemoattractant to induce monocytes, granulocytes, mast cells and T lymphocytes to reach the inflammation site. The antiinflammatory activities of SAA include inhibition of lymphocyte function, inhibition of TNF-α and IL-1- mediated fever and inhibition of platelet aggregation. SAA can also inhibit the respiratory burst of neutrophils and prevent oxidative damage of tissues and cells[14,15]. Like CRP, SAA concentration is a sensitive indicator of early inflammation in infectious diseases, which is helpful for the diagnosis, monitoring and treatment of inflammation. PCT consists of 166 amino acids and is a precursor of calcitonin, which is mainly produced by thyroid medullary C cells. In healthy people, PCT gene (calcitonin gene-related peptide 1, CALC-1) is transcribed and translated.

PCT is produced only in thyroid medullary C cells. The PCT produced is quickly cleaved into three substances by special enzymes: calcitonin, calcitonin and N-terminal amino acid fragments. Only a small amount of PCT is released into the blood circulation system, and its concentration is generally less than 0.05 ng/ml. Some studies have shown that when inflammation occurs in the body, target cells (peripheral blood mononuclear cells) secrete PCT under the action of many inflammatory related factors such as lipopolysaccharide. PCT synthesis is greater than decomposition. Undecomposed PCT is released into the blood, which ultimately leads to the increase of PCT in the blood circulation. Current studies have supported that PCT is an infection-related marker and an ideal marker for the diagnosis of infection, with high sensitivity and specificity[16,17].

At present, there are many studies on SAA at home and abroad, mainly focusing on early diagnosis of infection and early warning of prognosis of related diseases[18-20]. For example, SAA can be used as a prognostic indicator of coronary artery disease and cardiovascular disease in women. There is an association between SAA and epidemic coronary heart disease. The diagnostic value of SAA in unstable angina pectoris, the changes of SAA level and its clinical significance in patients with rheumatoid arthritis, the effects of continuous blood purification on SAA expression and T lymphocyte subsets in patients with multiple organ dysfunction syndrome, and the study on acute exacerbation of chronic obstructive pulmonary disease and kidneyrelated diseases were studied.

It was found that SAA on the first day after surgery could better assess the prognosis of patients, and was an independent risk factor for adverse prognosis of patients. It was also found that age, APACHEII score and cardiac function grading were independent risk factors for poor prognosis. In this group, the SAA level continues to rise in the dead group after operation, which might be related to the serious underlying diseases, poor immune function and serious infection after operation. There were some deficiencies in this study. Firstly, this study was a single-center observational study, and the extrapolation of the results was inevitably limited. Secondly, this study only monitors the changes of inflammatory markers within 3 d of perioperative period, and could not predict the changes of follow-up indicators. Finally, this study does not further explore the relationship between inflammatory markers and the severity of infection. To sum up, the prospective observational study found that SAA could be an early diagnose perioperative infection after cardiopulmonary bypass. Dynamic monitoring of SAA and traditional inflammation indicators could better diagnose patients with or without infection. The diagnostic value of SAA was better than traditional inflammation indicators. Postoperative SAA level was an independent risk factor for prognosis.