This paper aims to compare the effects of electrocoagulation and suture hemostasis on ovarian reserve function after laparoscopic ovarian cystectomy. According to the random double blind method, 220 patients who underwent laparoscopic ovarian cystectomy in our hospital between March 2014 and March 2016 were divided into two groups. 110 cases of observation group received suture hemostasis and 110 cases of control group received bipolar coagulation. Follicle stimulating hormone, luteinizing hormone, estradiol and antral follicle count were compared between the two groups at 1 mo and 3 mo after surgery respectively. 3 mo after the operation, the patients were follow up for ovulation and menstruation. The ovarian function of the two groups was compared. The results at 1 mo after operation showed that all the observation indexes of the two groups had a certain degree of improvement and there was significant statistical change (p<0.05) after the treatment (p>0.05). 3 mo after the operation, there was no significant difference in the observation group compared with the situation at 1 mo after the operation (p<0.05), but there was significant difference in the control group (p<0.05) and there was significant statistical significance between the two groups (p<0.05). For the observation group, abnormal ovulation, hypomenorrhea and prolonged menstrual period were less than those in the control group. There was statistical difference between the two groups (p<0.05). For patients receiving laparoscopic ovarian cystectomy, effect of suture hemostasis on ovarian function after surgery is less and there is a certain superiority compared with bipolar wound electrocoagulation. Thus, suture hemostasis is recommended as priority selection in the clinics.

In recent years, due to issues such as increased work pressure, life stress, irregular eating and resting and environmental pollution, etc. a variety of female diseases witness an upward trend in clinical incidence. Ovarian cyst is a female disease with high clinical incidence and women aged 25-50 y has the highest incidence. In clinics, moderate or smaller intra-abdominal mass will appear in the diseased region. If there are no complications or malignant transformation, its greatest feature is mobility, often passing from the pelvic to the abdominal cavity. In malignant or inflammatory conditions, tumor activity is limited, mass generally has no tenderness. But if there is infection and other complications, the mass not only has tenderness, but also has symptoms such as peritoneal irritation and ascites. Ovarian cysts (fig. 1) will affect the normal life of women in varying degrees, not only increasing their physical pain, but also making them have negative emotions such as too heavy psychological stress, anxiety, irritability, etc[1]. 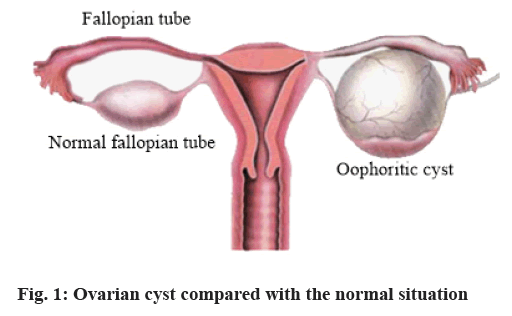 Therefore, patients with ovarian cysts must be promptly treated. Currently, laparoscopic ovarian cystectomy (fig. 2 and fig. 3) is adopted as the main approach for treatment of ovarian cyst. This approach enjoys prominent advantages: it enables more comprehensive and precise exploration of the disease; expands surgical field, provides fine operation to distinguish anatomical stratification of ovarian cancer and ovarian cortex; can find small lesions which are not observed by the naked eye and make treatment, to avoid surgical failure; laparoscopic surgery features advantages such as smaller wounds, faster postoperative recovery, shorter hospital stay, etc., which is more easily accepted by patients. Most patients can return to normal ovarian function after surgery, so the effect is good. However, in recent years, clinics found that different postoperative ways to stop bleeding may cause different effects on patients ovarian reserve function as electrocoagulation hemostasis may damage the patient’s ovarian function[2]. Although some clinical studies show not very obvious difference between suture hemostasis and bipolar coagulation hemostasis in observation indexes, suture hemostasis can better protect patient’s ovarian function, as among patients with bipolar coagulation hemostasis, a small number had ovarian failure[3]. Hence, most literature points out that postoperative suture hemostasis is better for patients with laparoscopic ovarian cystectomy. In this paper, 220 cases of patients were treated in our hospital in different ways to stop bleeding and their final ovarian function recovery was comprehensively analyzed and compared. The results show that suture hemostasis is better in effect. First, we performed data fitting analysis for all the original data in GSE131329 by the usage of R package “arrayQualityMetrics”. Heatmap of the distances between arrays, signal intensity distribution boxplot, MA plot, NUSE boxplot were shown (fig. 1). Therefore, our results showed that GSM3770505, GSM3770521, GSM3770553 were unqualified. These three samples should be dislodged without further analysis in GSE131329.

The selected objects were 220 cases of ovarian cyst patients treated in our hospital from March 2014 to March 2016, who underwent laparoscopic ovarian cystectomy in treatment. With age in the range of 26 and 47, the median age of the patients was (37.5±4.6) y. The mean duration of disease was (4.4±1.6) y and the average diameter of ovarian cyst was (5.77±1.85) cm. The patients were divided into two groups according to the randomized double blind method. In comparison of the general data, the patients showed a good balance (p>0.05) (Table 1).

Inclusion criteria: All selected patients underwent preoperative examinations of tumor markers including B ultrasound, alpha fetoprotein, carcinoembryonic antigen, etc. and were initially diagnosed as benign ovarian cyst; all the patients were diagnosed by histopathology as ovarian cyst; the patients had normal preoperative menstruation and received no hormone drug therapy 6 mo before surgery. All the patients in this study were agreed by the patients and their families and approved by the Medical Ethics Committee of our hospital[4].

Patients in the observation group underwent laparoscopic ovarian cystectomy. All the patients underwent preoperative tracheal intubation general anaesthesia and took position of buttocks higher than head. After 10 mm incision in the upper edge of the umbilicus was made, intraperitoneal injection of CO2 was performed to establish pneumoperitoneum with pressure of about 14 mmHg[5,6]. Further exploration of the patient’s abdominal cavity, pelvic and ovarian cysts was carried out. Cortex was extracted from the position with thick ovarian cortex and with no blood vessels or less blood vessels. After distinguishing boundaries between normal ovarian tissue and cystic tissue, cut the interval between normal ovarian tissue and cyst, to completely remove the cyst[7].

The observation group received suture to stop bleeding (fig. 4): wound was treated with microscopic Vicryl locking stitch suture, the 2-0 absorbable catgut was used for 8-form suture hemostasis at the bleeding point, needle insertion and withdrawal were close to the cortex, without penetrating the ovarian surface and the line knot was embedded in the ovary cortex. The control group received bipolar coagulation hemostasis (fig. 5). The wound was washed with saline to confirm the bleeding position. With regulating power of 30-40 W, fulgurate at each point for 1-2 s, so that the bleeding location is natural cured. 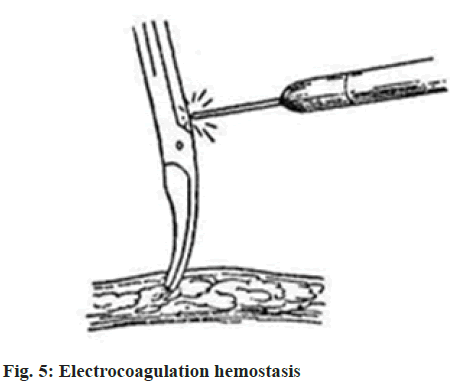 At 3 mo after the operation, the follow up visit was made to understand the ovulation and menstruation of the patients. The ovarian function of the two groups was compared.

In the study on effects of electrocoagulation and suture hemostasis on residual ovarian reserve function after laparoscopic ovarian cystectomy, the relevant data was analyzed by SPSS 19.0 statistical software. The count data were expressed as (n, %) and tested by chi square, the measurement data were expressed as (x?±s) and tested by t. The differences can only be considered to be statistically significant when p<0.05 is satisfied.

Table 2: Comparison of the Indicators of Observation Group before and after the Operation [(x?±s), N=110]

Table 3: Comparison of the Indicators of Control Group before and after the Operation [(x?±s), N=110]

The results of follow up at 3 mo after the operation showed that less abnormal ovulation, less menstruation and prolonged menstruation were observed in the observation group compared with the control group. There was statistical difference between the two groups (p<0.05) (Table 4).

Table 4: Ovarian Function Recovery of the Two Groups at Three MO after the Operation [(N, %), N=110]

During laparoscopic ovarian cystectomy, the patient will have bleeding, errhysis problems. In order to ensure postoperative safety, timely postoperative hemostasis is needed[8,9]. The suture hemostasis and bipolar coagulation hemostasis in the study are the two currently most used ways to stop bleeding.

Wang Lipeng and other researchers indicate in recent clinical studies that different hemostasis may exert different effects on patient’s ovarian function and that suture hemostasis may be more secure[10]. In order to further explore accuracy of this view and continuously improve medical level of our hospital, 220 cases of patients were treated with two ways to stop bleeding after laparoscopic ovarian cystectomy[11]. As seen from the comparison results for suture hemostasis patients, recovery effect of the various indicators is more obvious within 3 mo after operation. There was significant statistical difference (p>0.05) from the control group. In addition, ovulation, menstrual abnormalities of the observation group were significantly less than that of the control group at 3 mo after operation, which proved the superiority of suture hemostasis[12].

In summary, compared to electro coagulation hemostasis, suture hemostasis causes less damage to ovarian function of patients receiving laparoscopic ovarian cystectomy, with more stable recovery of the relevant indicators after the operation, which can help patients return to normal ovarian function in a shorter period of time, thereby reducing the impact on women’s life and work. According to the relevant results in the paper, suture hemostasis is proposed as preferred selection for patients receiving laparoscopic ovarian cystectomy.