A Chromatographic Determination of Aripiprazole using HPLC and UPLC: A Comparative Validation Study

A simple, precise, and accurate isocratic reversed-phase (RP) stability-indicating HPLC assay method was developed and validated for determination of Aripiprazole in bulk and solid pharmaceutical dosage form. A reversed-phase C8 (250×4.0 mm, 5 μm particle size) column for HPLC and C8 (50×2.1mm, 1.7 μm particle size) for UPLC method in isocratic mode was used. The mobile phase consists of acetonitrile: 20 mM ammonium acetate (90:10, v/v), flow rate was set at 1.0 ml/min and 0.250 ml/min for HPLC and UPLC, respectively and the detection was performed for both methods were at 240 nm. Further the validation of both developed method was performed and subsequently compared to prove its better applicability.

Aripiprazole is chemically identified as 7-[4-[4- (2, 3-dichlorophenyl) piperazin-1-yl] butoxy]-3, 4-dihydro-1H-quinolin-2-one, shown in fig. 1. More recently it received FDA approval for the treatment of acute manic and mixed episodes associated with bipolar disorder and as an adjunct for the treatment of depression [1]. Aripiprazole has been approved by the FDA for the treatment of acute manic and mixed episodes, in both pediatric patients aged 10-17 and in adults [2]. Several double-blind, placebocontrolled trials support this use [3-6]. In addition, it is often used as maintenance therapy, either on its own or in conjunction with a mood stabilizer such as lithium valproate. This use is also supported by a handful of studies [7,8]. The aim of the current study was to develop a validated stability-indicating high-performance liquid chromatographic (HPLC) assay method for determination of aripiprazole; additionally this method was transferred to UPLC, the latest technology in liquid chromatography to achieve the highest resolution, sensitivity and speed. Method validation was performed according to ICH guidelines [9,10] for both method and comparison of validation results were made to show its better applicability.

A mixture of acetonitrile and water (1:1) used as sample diluent for all sample preparations. Stock solution of Aripiprazole was prepared by dissolving accurately 100 mg of drug in 100 ml sample diluent. Further pipette out 10 ml of this solution and dilute it up to 100 ml with sample diluent. This mixture contains 0.1 mg/ml of aripiprazole standard solution.

To prepare sample, twenty commercially available 10.0 mg label claimed tablets of aripiprazole have weighed and the average weight of a tablet was determined. From these, 5 tablets were weighed and transferred into a 500 ml volumetric flask and added 50 ml acetonitrile followed by sonication of minimum 30 min with intermittent shaking. Then the solution has brought back to room temperature and diluted to volume with acetonitrile. The sample has filtered through a 0.22 μn nylon syringe filter and the available concentration was 0.1 mg/ml of analyte.

Mobile phase A consist of 20 mM ammonium acetate in HPLC grade water and mobile phase B consist of acetonitrile (HPLC grade). The Isocratic mode set at 10:90 (buffer:acetonitrile, v/v) for both HPLC and UPLC analysis. The selectivity of the aripiprazole can be altered by changing the pH of the buffer. The pre method validation experiments were performed to avoid uncertainty at the time of method validation; the chromatograms of the analyte using HPLC method and UPLC method are given in fig. 2. 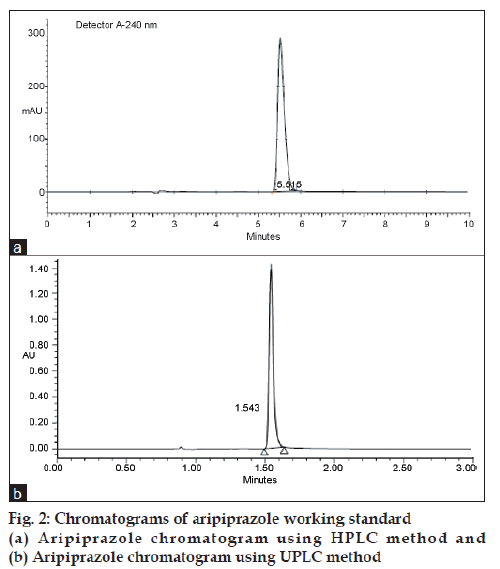 The accuracy experiment was performed by recovery study at three level 150%, 100% and 50% of sample concentration. The recovery was found between 99-101% for HPLC and 99-100% for UPLC analysis which is under the acceptance criteria to the ICH guideline Q2(A).

The method precision was assessed using multiple preparations of a single sample. Six different preparations of aripiprazole were analyzed in triplicate on the same day. Fresh solutions were prepared and analyzed on each of two successive days for Intermediate Precision Study. The % assay value was calculated for each sample preparation using the peak area of chromatogram. The relative standard deviation values obtained for the assay value of aripiprazole using HPLC and UPLC methods were not more than 2.0%.

The linearity of both methods was evaluated by analyzing eight solutions in the concentration range between 40-160 μg/ml of the drug substance. The peak areas obtained from different concentrations of the drugs were used to calculate linear regression equations. These are y=31252x + 17480, y=32511x – 25877 for HPLC and UPLC method respectively. Additionally correlation coefficients of both methods were same as R2=0.999. The high values of the correlation coefficients were indicative of linear relationships between the analyte concentration and peak area.

The Limit of Detection (LOD) and Limit of Quantification (LOQ) were established by evaluating the minimum level at which the analyte could be readily detected and quantified accurately. The LOD and LOQ were 0.05 μg/ml and 0.1 μg/ml for HPLC method, while the UPLC method has given the higher sensitivity. The LOQ and LOD values were 0.05 and 0.01 μg/ml of analyte for UPLC method with signal to noise(S/N) ratio more than 3.3:1 for LOD and more than 10:1 for LOQ. 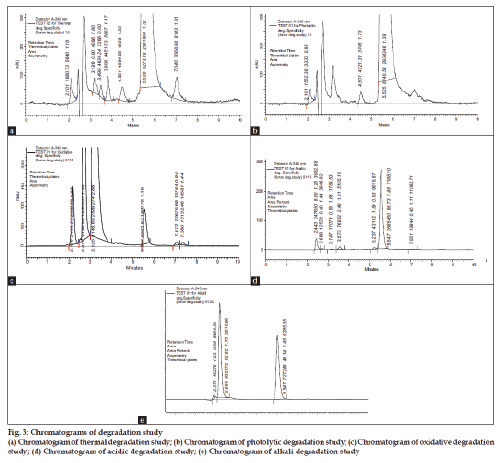 The influence of five (k) chromatographic parameters on the separation was investigated. The parameters examined were the amount of acetoniltile in mobile phase, the amount of buffer solution in the mobile phase, different column lot, different flow rate and difference in pH of buffer. There was no significant impact observed on the results during this study, which suggest that both methods were highly robust.

The proposed HPLC and UPLC methods, shows a good sensitivity, resolution and selectivity in bulk drug as well in pharmaceutical dosage form. The method was shown to be selective, precise, sensitive and linear which was proven by the results of validation. Between the both proposed methods, the UPLC method is faster as it has only 3.0 min total analysis time; additionally the sensitivity was much higher as compare to HPLC method, which is proven in comparison of validation result (Table 2). The method can be used for the quantification of aripiprazole. It can be applicable for the analysis of drug substances and drug products in pharmaceutical dosage form also.

Table 2: Comparison of hplc and uplc method By validation results

We are grateful to the National Facility for Drug Discovery through NCE’s development and Instrumentation support for Small Manufacturing Pharma Enterprises, Department of Chemistry, Saurashtra University, Rajkot for providing analytical facilities. We highly thankful to UGC, Govt.of India for providing financial support in terms of meritorious research fellowship and DST-DPRP for research assistantship. We are also thankful to the Torrent research Centre, India for providing working standards.