Solubility enhancement of poorly aqueous soluble drug is an important aspect of formulation development. Although there is plethora of reports of solubility improvement using different techniques, a comparative study of different solubilization approaches are few. Valdecoxib chemically designated as 4-(5-methyl-3-phenyl-4-isoxazolyl) benzenesulfonamide is a novel potent COX-2 inhibitor having poor aqueous solubility (10 mg/ml). Since it is poorly water-soluble, various techniques could be applied to increase its aqueous solubility. Objective of present study was to provide a comparison of effect of various solubilization techniques, namely micellar solubilization, cyclodextrin complexation and cosolvency, on solubility of valdecoxib. Solubility of valdecoxib was determined in various ionic and nonionic surfactants using phase solubility analysis. Similar type of study was performed using different water:cosolvent mixture. In addition, solubility improvement by use of 2 novel hydrophilic β -cyclodextrin derivatives, hydroxypropyl β -cyclodextrin and sulfobutyl ether-7-β -cyclodextrin was examined. Results showed that highest solubility (70 fold) was achieved with use of Cremophor EL followed by Tween 80 and sulfobutyl ether-7-β -cyclodextrin. It was found that surfactants with higher HLB values were better solubilizers. Solubilization capacity was found to increase with increase in hydrocarbon chain of surfactant, suggesting hydrocarbon core of micelles as locus of solubilization. Similarly, less polar solvents were found to increase solubility by greater extent, thus accentuating hydrophobic interaction mechanism. Among cyclodextrin, higher binding constant and solubility enhancement was obtained by use of sulfobutyl ether-7-β -cyclodextrin. Thus, the study generated an important dataset so as to compare effect of various solubilizers on solubility of valdecoxib.

Aqueous solubility of any therapeutically active substance is a key property as it governs dissolution, absorption and thus the efficacy in vivo. Solubilization may be defined as the preparation of a thermodynamically stable solution of a substance that is normally insoluble or very slightly soluble in a given solvent, by the introduction of one or more amphiphilic component(s) [1]. Solubilization of poorly aqueous soluble drug forms an important activity in formulation process. Buffers, cosolvency, surfactants and complexation are most commonly encountered pharmaceutical techniques for solubilizing drug(s) with low aqueous solubility [2]. Micellar solubilization i.e, using surfactant is one of the oldest and robust techniques of solubilization. With advent of nonionic surfactant, with low critical micellar concentration, compatibility with biological system and high solubilizing power, has been gaining importance in recent times. These surfactants, in aqueous environment, aggregate themselves to form micelles that can be defined as two-region system, inner nonpolar region of hydrocarbon part and exterior capsular region of polyoxyethylene chains. The inner hydrophobic core and extended interfacial region called mantle are usually the locus of solubilization for nonpolar drugs [3].

Natural as well as hydrophilic derivatives of natural cyclodextrins are being in great focus for their role as solubilizing excipient. Cyclodextrins (CD) are cyclic oligosaccharide (α 1 → 4 linked) of α-D-glucopyranose. The most important structural feature of cyclodextrins is a hydrophobic central pocket with hydrophilic outer surface. CDs are capable of forming inclusion complex with small molecule in host guest fashion; which in turn affect many properties of guest molecule, most important among them is solubility enhancement [4,5]. With introduction of hydrophilic derivatives of β-cyclodextrin such as hydroxypropyl β-cyclodextrin (HPβCD) and sulfobutyl ether-7-β cyclodextrin (SBE7bCD), cyclodextrin complexation has gained more attention in solubilization technology [6].

Use of cosolvent is another technique frequently utilized pharmaceutically for formulation of liquid formulation. Though highly effective, there use might be impeded by limit of cosolvent concentration that can be used and its precipitation on dilution. Use of cosolvent in combination with cyclodextrins and surfactants have also been examined by researchers [7,8].

Valdecoxib (VALD), a potent COX-2 inhibitor, chemically designated as 4-(5-methyl-3-phenyl-4-isoxazolyl) benzenesulfonamide, indicated for treatment of various osteopathic conditions and dysmennorhea [9]. Since it is very poorly soluble (10 μg/ml), it is desirable to improve its solubility by using different solubilizing excipients to improve its pharmacokinetic aspects. Although there have been enormous amount of research work performed using different techniques of solubilization, yet a comparative profile is very scarce. The aim of present study was to investigate effect of different solubilization approaches viz. micellar solubilization, cyclodextrin complexation and cosolvency, on the aqueous solubility of valdecoxib and comparison thereof. An attempt has been made to insight the mode of solubilization by aforementioned excipients.

Solubility studies were performed according to Higuchi and Connors [10]. An excess of valdecoxib was added to 25-ml stoppered flasks containing 10 ml of increasing concentrations (0.3% w/v to 1.5% w/v) of surfactant solutions. Flasks were shaken mechanically for 24 h. At equilibrium (after 2 d), aliquots were removed, filtered (0.22 μm pore size) and analyzed spectrophotometrically at 244 nm using Shimadzu 160A UV/Vis spectrophotometer. Each experiment was performed in triplicate.

Solubility studies were performed according to Higuchi and Connors10. An excess of valdecoxib was added to 25-ml stoppered flasks containing 10 ml of increasing concentrations (0.3% w/v to 1.5% w/v) of HPβCD and SBE7βCD solutions. Flasks were shaken mechanically for 24 h. At equilibrium (after 2 d), aliquots were removed, filtered (0.22 μm pore size) and diluted suitably. Diluted aliquots were analyzed spectrophotometrically at 244 nm using Shimadzu UV-160A spectrophotometer. Each experiment was done in triplicate. Stability constant (K1:1) was computed by the slope and intercept of solubility plot by following equation, Kc= Slope/So (1-slope).

An excess of valdecoxib was added to 25 ml stoppered flask containing 1, 5, 10, 20, 25% v/v fraction of water-cosolvent mixture (10 ml each flask). Flasks were shaken on a mechanical shaker for 24 h. After 2 d equilibrium, aliquots were withdrawn, filtered (0.22 μm pore size) and diluted suitably. These samples were analyzed at 244 nm on Shimadzu UV-160A spectrophotometer.

Surfactants are amphiphilic in nature i.e. composed of hydrophilic as well as lipophilic portions. These molecules have been widely used as solubility enhancers (solubilizers). This method is commonly known as micellar solubilization since they form micelles, which are association aggregates of surfactant molecule. Different types of surfactants viz. cationic, anionic and Non-ionic were studied for improvement of solubility of valdecoxib. A number of non-ionic surfactants were studied since non-ionic surfactants are more tolerable and compatible with biological system than ionic surfactants. Solubility profile of valdecoxib with different surfactants is depicted in figs. 1 and 2. All surfactants exhibit significant improvement of aqueous solubility of VALD. The solubility of drug increased with increasing surfactant concentration linearly as shown in Table 1. This indicates that solubility obeys partition model [12]. Rank order of solubility improvement is as follows, Cremophor EL (70 fold)>tween 80 (47 fold)>cetrimide (42 fold)>brij 58 (34 fold)>SLS (35-fold) brij 35 (31 fold)> poloxamer 407 (13 fold). Table 1: Solubility and distribution coefficient of valdecoxib in surfactant solutions

Table 2 summarizes amounts of drug solubilized in mg/g surfactant and corresponding distribution coefficient. It is clearly evident that higher the solubilizing efficiency, higher the distribution coefficient. This suggests that more amount of drug is being partitioned in micellar core. Drug molecules can be solubilized by incorporation to the micelles formed by surfactants. The more nonpolar the solute, the more likely it is to be incorporated near the core or center of the micelle. The relationship between the drug solubility in a micellar solution and surfactant concentration is described as [13], S total = Sw+k(Csurf-CMC), where Csurf is the concentration of micellar surfactant (ie, the total surfactant concentration minus the critical micellar concentration) and k is the molar solubilization capacity, the number of moles of solute that can be solubilized by 1 mole of micellar surfactant. If the critical micellar concentration (CMC) is much lower than Csurf, eqn 2a can be approximated by Stotal = Sw+kCsurf.

Table 2: Solubility of valdecoxib in surfactant and cyclodextrin solutions

Data were fitted in above equation and solubility parameters obtained thereby are presented in Table 3. From class of polyoxyethylene fatty ether of alkyl alcohols; Brij 58 (HLB value 15.7) was found to be more efficient solubilizer than Brij 35 (HLB value 16.9), having shorter hydrocarbon chain length. Similarly, Tween 80 (HLB value 15) with longer hydrocarbon chain length, longer than Brij 58, improved solubility by greater extent. In class of polyoxyl castor oil, cremophor EL with HLB value between 12 to 14, main composition of which is glycerol poly ethylene glycol ricinoleate, was found to improve solubility to greatest extent. Whereas, poloxamer 407 gives lowest solubility improvement that was expected since it has got higher HLB value and very short hydrophobic portion.

Higher solubility increment can be noticed with increase in hydrocarbon chain length of non-ionic surfactants. This data suggests that VALD molecules preferably tend to solubilize in hydrophobic portion of micelles and locus of solubilization can be assumed in inner hydrophobic core of micelles. Moro et al. studied solubilization of diazepam and prazepam in presence of a homologous series of surfactant and concluded that the hydrocarbon core seems to have more solubilization capacity than polyoxyethylene mantle [14].

Cyclodextrins are cyclic oligosaccharides, widely reported as effective solubilizer for poorly aqueous soluble drug. Fig. 3 shows solubility profile of VALD with HPbCD (17fold increment) and SBE7βCD (38- fold increment). Both hydroxypropyl and sulfobutyl derivatives showed significant increase in VALD solubility in water. The phase solubility diagrams obtained (fig. 3) are linear, and shows characteristics of AL-type of solubility curve. This is attributed to formation of soluble complex. Since it has slope of less than unity, it is assumed that stoichiometry of these complex is 1:1. Stability constants, calculated using slope of curve, are reported in Table 3. Cyclodextrins are known to form inclusion complex by hydrophobic molecules in a host-guest fashion, where central hydrophobic cavity of cyclodextrin acts as host for whole drug or part of it. This inclusion process is thought to be driven primarily by expulsion of enthalpy-rich water molecules from hydrophobic cavity, which cannot satisfy hydrogen-bonding potential of water molecules. However, some researchers hypothesize role of hydrophobic forces such as van der wall forces etc. in formation of complex15. Sulfobutyl ether derivative showed more than 2 fold increase in solubility of VALD as compared to hydroxypropyl derivative. Moreover, SBE7βCD showed higher binding constant which could be attributed to higher solubility of sulfobutyl derivative itself. Nagase et al. reported solubility improvement of ebselen with various substituted βCDs with similar results and concluded that sulfobutyl derivative was the superior among all derivatives. They also suggested that hydrophobic character near cavity plays important role than ionic character as increasing alkyl chain length in different 2-hydroxyalkylated derivative results in increased Kc values [16]. 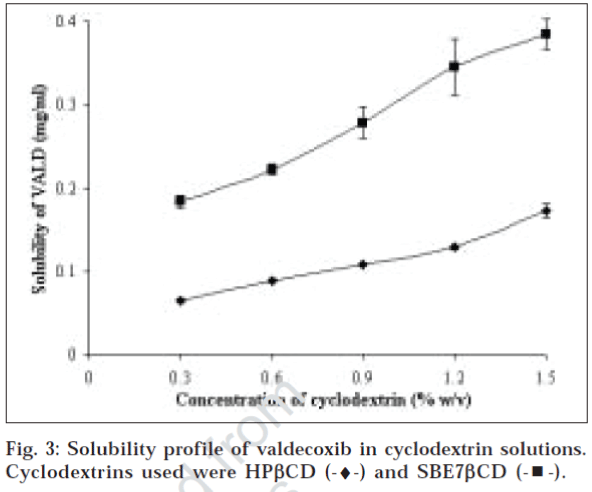 Fig. 4 shows solubility profile with water-cosolvent systems. Both PEG-400 and PEG-600 showed exponential increase in solubility with increase in cosolvent fraction. The increment in solubility was found to be 80-fold and 59-fold for PEG 400 and PEG 600 at 25% cosolvent level. The exponential dependence of the solubility of nonpolar solutes on cosolvent concentration in a semi-aqueous solution is described as equation, log[Dtot]= log[Du]+σ[C], where [Dtot] is the total apparent drug solubility, [Du] is the intrinsic drug solubility, [C] is the cosolvent concentration, σ is the cosolvent solubilizing power for the solute [17,18]. Cosolvents are usually water miscible solvents, widely used in pharmaceutical field for solubilization purpose. These solvents usually reduce chemical potential of solution by decreasing hydrogen bond density of water, thus create a less polar environment in bulk, resulting in more drug molecules going into solution. Less polar the solvent, higher the solubilization power and larger the σ value. As expected, PEG-400 being less polar showed better solubilization power. σ values for PEG 400 and 600 are reported in Table 3. It is clearly indicative that valdecoxib molecules preferably solubilize in nonpolar environment rather than polar (aqueous) surroundings. The study evaluated and compared solubility enhancement of valdecoxib using 3 different solubilization techniques. Cremophor EL was most efficient solubilizing excipient, improving solubility by nearly 70 fold. Moreover, data suggests that site of solubilization for valdecoxib is primarily hydrophobic inner core of micelles when surfactants are used. Among cyclodextrins, SBE7bCD complexation results in solubility enhancement by more than 30 fold with high stability constant. Thus the study generates an array of data for solubilization of valdecoxib using various pharmaceutically accepted techniques which could be useful while formulating liquid/semisolid dosage forms of valdecoxib.