Ethanol extract of leaves and flavonoid (isolated from leaves extract) from Tephrosia purpurea were evaluated for hepatoprotective activity in rats by inducing hepatotoxicity with carbon tetrachloride. These fractions were administered orally at a dose of 100 mg/kg/day. Serum level of transaminases, alkaline phosphate, and total bilirubin were used as biochemical markers of hepatotoxicity. Histopathological changes in the liver were also studied. The results of the study indicated that the hepatoprotective activity was more in ethanolic extract of leaves than isolated flavonoid.

Flavonoids, which occur both in the free state and as glycosides, are the largest group of naturally occurring phenols. More than 2000 of these compounds are now known, with nearly 500 occurring in free state. They are formed from three acetate units and phenylpropanoid units. They are widely distributed in nature but are more common in young tissues, where they occur in cell sap. They have been used extensively as chemotaxonomic markers and are abundant in the polygonaceae, rutaceae leguminosae, umbelliferae, and compositae. Although, the original high hopes for the therapeutic usefulness were not immediately realized but recently researchers have demonstrated their involvement in the medicinal action of drugs, such as, liquorice root and gingko. It is very probable that a number of herbal remedies, whose constituent are yet unknown, will be shown to contain active flavonoids [1]. Flavonoids possessing broad biological properties have been demonstrated. The capability to interact with protein phosphorylation and the antioxidant, iron-chelating, and free radical scavenging activity may account for the wide pharmacological profile of flavonoids [2]-[4] .

Tephrosia purpurea Pers. is a pantropical coastal shrub that grows up to 1 m in height [5]. It occurs throughout the Indian sub continent. Previous phytochemical investigation on this plant have shown the presence of coumarins [6] flavonoids and rotenoids [7],[8], flavanones [9],[10] and isoflavanones [11] and quercetin [12].

Plant leaves were selected for assessment of the activity. The dried leaves (dried under the shade) were extracted with 95% ethanol for 48 hour after defatting with petroleum ether for 72 hour. The extracts were filtered and concentrated in vacuum under reduced pressure and dried in desicator at room temperature.

Characterization of fraction A

For characterization qualitative tests and spectral studies were carried out. Shinoda test (qualitative test) was positive which is characteristic of flavonoids. Qualitative tests for other chemical constituents were found negative. The UV spectroscopy of the compound was performed using Shimadzu. The λmax of the compound was found at 208.9, 256.6 and 355.2 nm. The U.V. maxima indicate the possibility of flavonoidal residue supported by the literature [13]. The IR spectrum of the fraction A showed strong absorption bands at 3415 cm-1 (–OH), 1602.1 cm-1 (unsaturated C = O), 2933 cm-1 (C-Me), 1060 cm-1 (glycosidic C – O) groups that are found in the flavonoids [14],[15]. So these different studies showed that isolated fraction A is containing flavonoid.

A prior permission was taken from Animal Ethical Committee to carry out the activity (Approval no.216/01/AB/CPCSEA and date-15 Jan 2004). Solution of CCl4 (50%) was prepared in liquid parraffin for use as challenge. Ethanol extract of leaves and fraction A were suspended in 2% PVP solution (10 mg/ml of drug in each case) for administration. The experimental animals (Wister rats of either sex, weighing between 100-150 g) were divided into 4 groups of each. The group I served as control. The group 2-4 recieved 2ml/kg/day oral dose of ethanol extract of leaves and fraction A, respectively. This treatment was carried out for 4 days. On the 5th day, blood samples were collected through retro orbital plexus with the help of thin capillaries into Epphendorf tubes and allowed to coagulate for 30 min. Clear serum was separated and the estimation of SGOT (serum glutamate oxaloacetate transaminase), SGPT (serum glutamate pyruvate transaminase)[16], SALP (serum alkaline phosphate)[17] and total bilirubin [18] were undertaken using RA- 50 model analyzer (Bayer India Ltd.).

The livers were excised from the experimental animals of each group after collecting the blood sample and washed with normal saline. Initially the materials were fixed in 10% neutral formalin solution. Sections were cut using microtome technique [19] after paraffin embedding. The sections were processed in alcohol xylene series and were stained with hematoxylin and eosin. The different sections were examined microscopically for the evaluation of histopathological changes.

C – O) groups that are found in the flavonoids14,15. So Results of liver functioning biochemical parameters were reported as mean ± SD of six animals in each group. student's t-test was used for determining significance.

Histological section of control animals Group I showed normal hepatic cells with well-preserved cytoplasm, prominent nucleus and nucleolus and conspicuous central vein (fig. 1). Histological section of Group II animals showed high degree of damage characterized by cell vacuolation, pyknotic and degenerated nuclei and damage to wall of capillaries (fig. 2). Histopathological profile of the Group III showed the recovery against the CC14 induced damage as compared to control (fig. 3). Whereas, the histological section of the Group IV showed that nuclei are not clear as in normal hepatocytes but as compared to the CCl4 damage ones, the hepatocytes with normal nucleus are more. Endothelium was disrupted at places but in lesser number than CCl4 intoxicated rats. Hepatic cells adjoining to interlobular vein showed atrophy. Pyknotic nucleus and vacuolation in cytoplasm were observed to be low. There seemed to be a satisfactory recovery (fig. 4).

Table 1: Serum Parameters Of Animals Treated With Cci4, Ethanolic Extract Of Leaves And Fraction A. 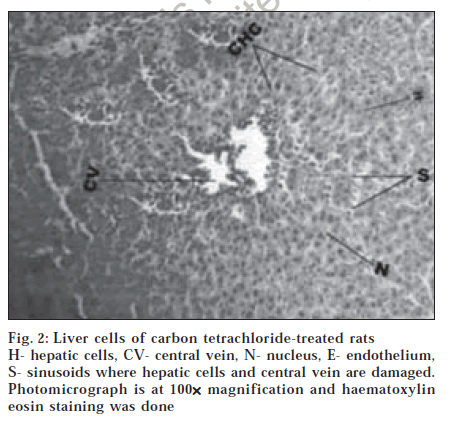 Results indicated that the ethanolic extracts of leaves and fraction A from T. purpurea provided significant protection against the toxic effect of CCl4 on liver. Preventive action of liver damage induced by the CCl4 has widely been used as indicator of the liver protective in general [20]. CC14 produces an experimental damage that histologically resembles viral hepatitis [21]. Toxicity begins with the change in endoplasmic reticulum, which results in the loss of metabolic enzymes located in the intracellular structures [22].

The toxic metabolite CC13 radical is produced by microsomal oxidase system, binds covalently to the macromolecule and causes peroxidative degradation of lipid membrane of the adipose tissue. In view of this, the test dug mediated reduction in levels of SGOT and SGPT towards the respective normal values is an indication of stabilization of plasma membrane as well as repair of hepatic tissue damage caused by CC14. This effect is agreement with the commonly accepted view that serum level of transaminases return to normal with the healing of hepatic parenchyma and regeneration of hepatocytes [23]. Alkaline phosphate is the prototype of these enzymes that reflects the pathological alteration in biliary flow [24]. CCl4 induced elevation of this enzymatic activity in the serum is in line with high level of serum bilirubin content. The test drug mediated suppression of the increased SALP activity with the concurrent depletion of raised bilirubin suggest the possibility of the test drug being able to stabilize biliary dysfunction in rat liver during hepatic injury with CCl4.

I thank the AICTE, New Delhi from heart for providing scholarship during my M. Pharm dissertation work.