A floating drug delivery system of piroxicam in the form of microspheres was prepared using an enteric polymer and emulsification solvent-evaporation method. The microspheres remained buoyant continuously over the surface of acidic media containing surfactant for a period of 8-12 h in vitro . Differential scanning calorimetry and X-ray diffraction studies showed that drug incorporated in the outer shell of the polymer was completely amorphous. Scanning electron micrographs indicated that the microsphere is perfect sphere with an internal hollow cavity enclosed by a rigid shell of polymer. The micromeritic properties of microspheres were found to be much improved compared with original drug crystals. The in vitro drug release behavior of the floating microspheres was characterized as an enteric property. Polymer being soluble above pH 7.0, the drug release rates from microspheres changed dramatically above and below pH 7.0. At intestinal pH the drug release was faster and continuous as compared to the amount released at gastric pH.

Most of the orally administered dosage forms have several physiological limitations, such as gastrointestinal (GI) transit time, incomplete drug release from devices and/or too short residence time of the pharmaceutical dosage forms in the absorption region of GI tract. This leads to low bioavailability of sustained-release dosage forms and even if slow release of drug is attained, the drug released after passing the absorption site is not utilized, thus lowering the efficacy of the drug. To overcome this problem several attempts have been made to develop oral dosage forms capable of having prolonged retention time in the stomach to extend the duration of drug delivery. One approach is floating drug delivery systems (FDDS) which remain buoyant due to their having a lower density than the gastric and intestinal fluids. Both single and multiple unit systems have been developed [1,2]. Multiple unit FDDS such as microspheres have the advantage they are not subjected to ‘all or nothing’ gastric empting nature of single unit systems [3]. A growing proportion of elderly patients suffer from diseases like osteoarthritis or rheumatoid arthritis and they require nonsteroidal antiinflammatory drug (NSAID) therapy for the treatment of it. But NSAIDs are well known for their gastrotoxic and duodenotoxic effects [4]. Piroxicam, a nonsteroidal antiinflammatory drug exhibits better tolerance than aspirin, indomethacin and naproxen [5]. Poly lactic acid microspheres of piroxicam have been prepared by a solvent evaporation method and a spray-drying method [6]. Liposome encapsulated and a spray-drying method6. Liposome encapsulated piroxicam produced an increase in topical antiinflammatory effect, suggesting that the inhibition of inflammation can be obtained with lower drug concentrations [7]. To achieve the same goal, floating microspheres loaded with piroxicam were prepared using modified emulsion-solvent diffusion method. In this study, the microsphere preparation process and the physicochemical properties of the microspheres, such as particle size, particle density and crystalline form of drug in the microsphere were investigated. Furthermore, the floating and in vitro drug release behavior of the microspheres was also studied.

Piroxicam was a gift sample from IPCA Laboratories Ltd., Mumbai. Eudragit S 100 was obtained as gift sample from Rohm Pharma, GmbH (Germany). Polyvinyl alcohol was purchased from Qualigens Chemicals, Mumbai. All other reagents and solvents used were of analytical grade. The microspheres of piroxicam using Eudragit S were prepared as follows. Piroxicam (0.1 g) and Eudragit S, an enteric polymer soluble at pH>7.0 (0.1-0.5 g) were dissolved in ethanol:dichloromethane mixture (1:1 v/v, 10 ml) at room temperature. The drug solution was poured slowly as a thin stream into 200 ml of water containing 1% w/v polyvinyl alcohol. The solution was kept at constant temperature (40°) while stirring at 300 rpm. The finely dispersed/emulsified droplets of the polymer solution of drug were solidified in the aqueous phase via diffusion of the solvent [8]. After agitating the mixture for 1 h, the microspheres were filtered, washed several times with water to remove traces of polyvinyl alcohol and dried overnight at 60°. During drying, microsphere cavity became hollow resulting in FDDS.

The in vitro dissolution studies were carried out using United States Pharmacopeia XXIII paddle-type dissolution apparatus (Electrolab, Mumbai). Drug loaded microspheres containing 10 mg of drug was introduced into 900 ml of the dissolution medium maintained at 37±0.5° with paddle rotating at 100 rpm. Aliquots were withdrawn at regular intervals and analyzed spectrophotometrically using Shimadzu 160 A UV/Vis Spectrophotometer. The dissolution studies were carried out in triplicate in 0.1N HCl (pH 1.2) and pH 7.4 phosphate buffer. The mean values are plotted as percentage cumulative release versus time.

The microspheres were found to float continuously in the acidic solution (pH 1.2-3.5) containing tween 20 (0.02%) that was stirred with a magnetic stirrer for >12 h. A surface-active agent was added to the acidic solution to take into account the wetting effect of natural surfactants in vivo, such as phospholipid and bile salts. The particle size (arithmetic diameter) distribution of drug-loaded microspheres was as shown in fig. 1. From the particle size distribution it is evident that as the polymer concentration increases the microsphere diameter also increases. The flow properties of the microspheres, represented in terms of angle of repose as shown in Table 1, were much improved over those of pure drug crystals. The bulk and tapped densities were equivalent for the microspheres and drug crystals, but the microspheres were found to have higher packability. It was found that piroxicam existed completely in the amorphous state dispersed uniformly at the molecular level like a solid dispersion in the polymer shell of microspheres as indicated by characteristic peakless patterns of the DSC thermograms and the X-ray diffractograms. The scanning electron microphotographs (SEM) of the surface of a microsphere are shown in fig. 2, which indicates that the drug-loaded microsphere was a perfect sphere and had a smooth surface. The characteristic internal structure of the microsphere, a hollow cavity inside, enclosed with the rigid shell constructed with drug and polymer was clearly evident. Eudragit S100 is an enteric polymer, therefore drug release rate from microspheres changed significantly above and below pH 7. There was no initial burst release of piroxicam from the floating microspheres as the entrapped drug was in the amorphous state in the polymeric shell and there are no free drug crystals present on the surface of microspheres. At lower drug:polymer ratios, the proportion of smaller size particles formed was higher than that at higher drug:polymer ratios. Therefore, the drug release from microspheres prepared at lower drug polymer ratios was faster than those prepared at higher drug polymers ratios due to the small size of microspheres which provide large surface area for faster drug release as presented in fig. 3 and fig. 4. Also with increasing polymer concentration, the drug release rate from microspheres decreased drastically. In acidic medium, the drug release was comparatively slow due to the solubility limitations and most of the microspheres floated on the surface of dissolution medium. In contrast, about 85% of drug was released at the end of 10 h while using pH 7.4 phosphate buffer for dissolution rate study. Thus it can be predicted that while prolonging the residence time in the stomach the subunits, which lost the buoyancy in vivo might successfully pass through the stomach and release the drug in significant amounts in the lower part of GIT. 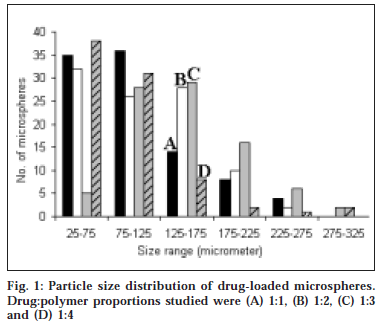 *Each value is ± SD of three independent determinations 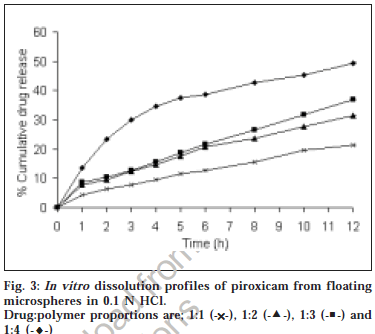 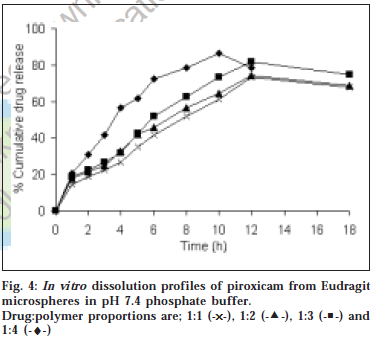 The method used in the present work generates hollow Received 28 October 2005 microspheres by the emulsion-solvent diffusion method with excellent buoyancy, good micromeritic properties and is adaptable to any intragastric condition. These microspheres are easily handled and can be filled into capsule. Therefore, multiple unit system based on Eudragit microspheres would be of significance as FDDS for sustained drug delivery by the oral route.