Montelukast is a potent orally active cysteinyl leukotriene receptor antagonist that significantly improves parameters of asthmatics. A new liquid-liquid extraction based reverse phase liquid chromatography method has been developed and subsequently validated for the determination of montelukast in human plasma. The separation was achieved with C8 column (150×4.6 mm, 5 micron) and a mobile phase comprising of a mixture of 10 mM ammonium acetate buffer (pH 3.0) and acetonitrile in a ratio of 35:65 v/v. Montelukast was extracted from human plasma using a liquid-liquid extraction technique with ter-butylmethylether. The limit of detection and lowest limit of quantification were 5 and 10 ng/ml respectively. This method was found to be linear over the range of 10 to 1000 ng/ml with a recovery of 53 to 62%. Intraday and interday precision (% CV) was <15% and accuracy ranged from 96.23 to 108.39%. Stability studies showed that montelukast in human plasma is stable during the short-term period of sample preparation and analysis. This method can be used with small volume sample during pharmacokinetic studies.

Montelukast ([R-(E)]-1[[[1-[3-[2-(7-chloro-2-quinolinyl) ethyl] phenyl]-3-[2-(1-hydroxy-1-methylethyl) phenyl] propyl]thio] methyl] cyclo propane acetic acid, fig. 1 is a selective and orally active cysteinyl leukotriene (CysLT1) receptor antagonist. It is used for prophylaxis and chronic treatment of asthma [1-3]. Few liquid chromatographic methods with UV detection [4], fluorescence detection [5], stereoselective determination of S-enantiomer of montelukast on column switching technique with fluorescence detection [6]; and 96 well-based extraction methods [7,8] are reported for the assay of montelukast in human plasma. The reported methods are based on either protein precipitation techniques, which are preliminary in nature and nonspecific [9] or solid phase extraction technique. Emphasis has been laid on the reduction of blood sample volume during analysis and hence less amount of sample withdrawal is required during kinetics-related studies. We report a new liquid-liquid extraction based simple, economic and sensitive HPLC method with fluorescence detection to determine montelukast in human plasma with small plasma sample volume.

The mixture consisting of 10 mM ammonium acetate buffer (pH 3.0) and acetonitrile (35:65, v/v) was found to be an appropriate mobile phase, allowing adequate separation of drug and the internal standard using a C8 column at a flow rate of 1.0 ml/min. The fluorescence detection was done at excitation and emission wavelengths of 350 and 400 nm respectively. The detector was set on programmed mode, which showed no interference from the endogenous polar impurities (Table 1). Stock solutions of drug and internal standard (100 μg/ml) were prepared in methanol and stored at 4°C. The working standards of 1 μg/ml and 100 ng/ml were prepared and used within 2 w from the date of preparation.

To prepare quality control (QC) samples, appropriate volumes from working solutions of montelukast were transferred to 50 ml flask and diluted to the mark with blank human plasma and thoroughly mixed. The concentrations of montelukast were 30, 150 and 800 ng/ml in blank human plasma to represent low, middle and high controls (HQC, MQC and LQC) respectively. The QC samples were stored at -80°C.

Fifty microlitres of internal standard (10 μg/ml of quinine sulphate in methanol) was added to each 200 μl of human plasma samples and vortexed for 10 s. Saturated solution of sodium bicarbonate (50 μl) was added to it, followed by vortexing for 10 s. Ter-butylmethylether (2 ml) was added, followed by vortexing for 2 min and centrifuged at 5000 g for 5 min. Organic layer was transferred to another set of labelled test tubes. Organic layer was evaporated under nitrogen. Residue was dissolved in 150 μl of mobile phase and 100 μl of this sample was injected for analysis.

Calibration curves were prepared by adding known amounts of montelukast (2, 4, 8, 15, 50, 100 and 200 ng) to 200 μl of blank human plasma. An aliquot of 50 μl of the internal standard in methanol (10 μg/ml) was added to each sample. The samples were extracted as described above. The standard curves were constructed by plotting ‘the peak area ratio of montelukast to that of internal standard’ versus ‘their respective concentrations.’ The calibration curves were obtained by least square linear regression analysis. The calibration curves showed linearity over the range of 10-1000 ng/ml for montelukast. The coefficient of correlation was found to be more than 0.99.

In order to calculate recovery of the extraction procedure, six QC plasma samples of montelukast (800 and 150 ng/ml) were analysed and the peak area ratios of montelukast to that of internal standard were compared with those of unextracted montelukast in mobile phase (Table 1). 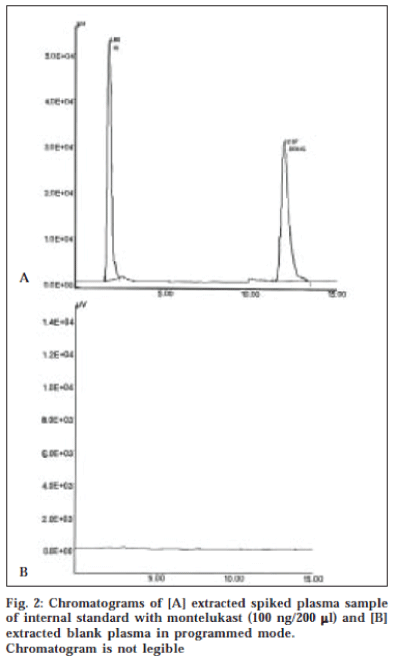 Fig. 2: Chromatograms of [A] extracted spiked plasma sample of internal standard with montelukast (100 ng/200 µl) and [B] extracted blank plasma in programmed mode. Chromatogram is not legible

A new liquid-liquid extraction based method has been developed and subsequently validated for the determination of montelukast in human plasma with small plasma sample volume with fluorescence detection. This method has been found to be specific and cost-effective and can be used for quantitative analysis of montelukast during bioavailability/ bioequivalence studies and clinical trials.

Authors are thankful to the Industries Commissionerate, Gujarat State, India, for financial support towards the instrumentation facilities; and Ms. Swati Guttikar and Ms. Aswini Ozha for their guidance.