A New Polymorph of Estradiol and its Stability Studies

The study of polymorphism in drugs is an important part of drug development process in present scenario. The present study identified a new polymorph of estradiol, which is one of the sleep awakening drugs in the market along with its characterization with powder X-ray diffraction, differential scanning calorimetry and thermogravimetric analysis and its stability data.

Polymorphism is obtained from Greek word, polus means many and morph, means shape. In other words, it is also defined as the ability of a substance to exist in two or more crystalline phases that have different arrangements or conformations of the molecules within a crystal lattice[1]. Different polymorphs of a drug substance have different physical properties like dissolution pattern, which in turn can affect their bioavailability and efficacy[2]. In addition, mechanical properties like hardness, tensile strength, flowability are also affected due to polymorphic change, which in turn affects the compatibility and hardness of a tablet or any other drug formulation[3]. Stability studies of the polymorph plays an important role for finalization of formulation process and storage conditions for a particular drug. For example, an amorphous form of atorvastatin calcium is unstable at higher temperature and its drug formulation is sold with a warning stating that the drug is to be stored at room temperature (25-30°)[4]. There are many drugs which show polymorphism with differences in their properties.

Literature survey revealed that only limited work has been done on polymorphic isolation of estradiol. Only 8 polymorphs have been reported till date (Table 1). It is widely used in combination with oral contraceptives and as a hormonal replacement therapy given in the form of transdermal patch. The patches being used are reported to crystallize after sometime, thereby affecting the uniform delivery of this steroid[5,6]. Different methods are reported in literature to get the desired polymorph using the antisolvent technique[7,8].

In the present investigation, an attempt has been made to prepare a new polymorph of estradiol using solventantisolvent technique in which estradiol is dissolved in one solvent and an antisolvent was added to the resulting homogenous mixture to precipitate estradiol as the desired polymorph. Tert-butanol was purchased from Sigma Aldrich (Batch Number-360538) and estradiol (Batch No- 201006531) was obtained as a gift sample from Macleods Pharmaceutical Limited, India. Water was double distilled before using it as an antisolvent. A novel crystalline polymorph of estradiol was isolated using tert-butanol and water combination of solvents. Estradiol was dissolved in tert-butanol by heating up to 60° and water was added dropwise to precipitate estradiol as the desired polymorph. The new polymorph thus isolated was designated as form G in this study.

The X-ray diffractogram of form G is presented in figure 1. The diffractogram showed the presence of two additional peaks at 2θ 7.8 and 8.9. Thermal analysis is mainly used for identifying melting points of different crystalline forms of a compound and to assess the presence of a solvate as indicated by any weight loss during heating. Thermogravimetric analysis (TGA) of form G of estradiol reproduced in figure 2 showed a weight loss of 0.996 % between 90 to 150°, which is equivalent to 1 %. This could be due to the loss of tert-butanol from the tert-butanol solvate. The result is in consistence with the weight loss observed in case of the methanolate solvate of estradiol near 145°[9]. The form G exhibited thermal behaviour different from the hemihydrate form, which showed a weight loss of 3.2 % in the thermogram from 90-110°[10]. 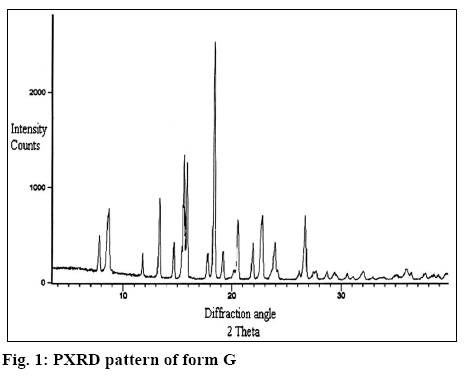 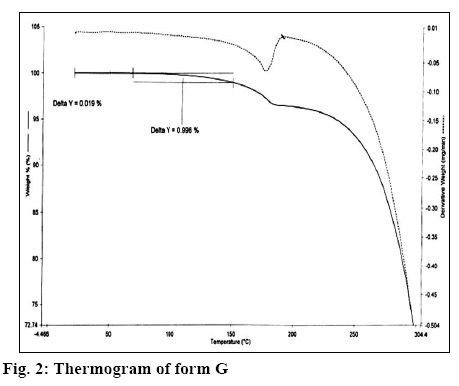 It is clear from Table 1 that Form G was different from all the other forms reported in literature. Form G has two characteristic peaks at 2θ values of 7.8 and 8.9 in powder X-ray diffractometry (pXRD). No peak at this region is reported for the hemihydrate[10], EM, ET, EP, EC[11] and anhydrous form[12], which clearly differentiated form G from these forms. This is further supported by the difference in the TGA and differential scanning calorimetry values (wherever reported as per Table 1, figure 3) for these forms. Further, as reported in literature[9], form ED is reported to be unstable and is always found as a mixture with EC form but stability study has shown that form G is stable indicating that form G is different from form ED. In addition, form EM shows 2 endotherm at 110-120° and 145-160° as compared to 2 endotherm at 172° and 177° in case of form G (figure 4) supporting the fact that form G is different from form EM. 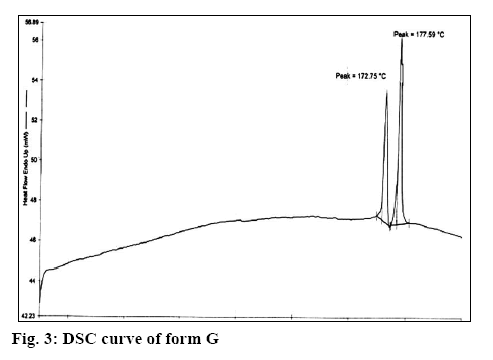 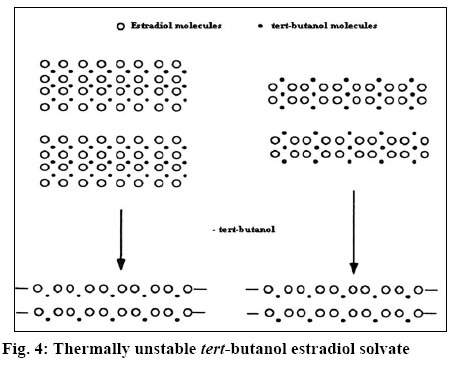 For the stability study of form G, the samples were packed in double polythene pack with aluminum foil and were stored for 6 mo at 5, 25, 45 and 70°. The pXRD’s of different samples were obtained after 1, 3, 4 and 6 mo. The pXRD’s of form G is reproduced in figure 5, and data are represented in Table 2. Authors thank Lovely Professional University and Rajasthan University for providing the required facilities to carry out the work. Also, special thanks to Macleods Pharmaceutical Limited for providing estradiol as gift.