Agastachis Herba, the aerial part of Agastache rugosa, known as Korean mint, is one of the commonly used herbs in traditional Korean medicine. The leaves of A. rugosa can be used as a flavor. A. rugose, a perennial herb out of about 20 species of Agastache genus that has long been used to treat anxiety, pain and other afflictions [1]. Aerial parts of this herb prepared in boiling water or as maceration in alcohol has been used to treat various types of disease like cardiovascular, rheumatism, and gastrointestinal conditions [1,2]. In the Korean traditional medicine, Agastachis Herba has been extensively used for treating various diseases [3], but only few researchers have reported its effects on specific disease models. Amanda et al. reported that A. mexicana exhibited significant relaxant effect on the rat tracheal rings and suggested that it could be used to treat asthma [4].

Asthma affects people of all ages and the most common trigger is continuous exposure to allergens [5]. Allergic asthma is characterized by increased mucus production, reversible airway obstruction, infiltration of eosinophils and nonspecific airway hyper responsiveness [6,7]. The development of asthma is mediated by the over-expression of Th2-mediated or Th1-mediated cytokines, including interleukin (IL)-4, IL-5, IL-9 and IL-13 [6,7]. Current therapies have failed to control the symptoms of asthma completely and even intensive treatment found to be ineffective [8]. Consequently, effort should be made to identify new remedies, preferably of natural origin, for mitigating this disorder. We previously reported the strong possibility of herbal remedies as a complementary or alternative to current treatment and also demonstrated that regulation of Th1/Th2 imbalance may be one of the ways to treat respiratory disease [9,10]. Therefore, in this study, we investigated the effect of Agastachis Herba on a mice model of asthma.

Seven week-old female BALB/c mice (Daehan Biolink, Daejeon, Korea) were housed in polypropylene cages at 24±4° under 12 h light and dark cycle for at least 1 week prior to the study. The mice were fed with standard pellet diet and provided water ad libitum. All experiments were approved by the Institutional Animal Care Committee of Pusan National University and conducted in accordance with the guidelines of Pusan National University.

Standardized Agastachis Herba was purchased from Gwangmyung Natural Pharmaceutical Co. (Ulsan, Korea), and voucher specimens (No. 201-BCH) were deposited at the Herbarium of School of Korean Medicine, Pusan National University. One kilogram of Agastachis Herba was extracted with 10 times volume of 80% methanol at room temperature for 3 days, and this was repeated three times. After filtration using filter paper (Advantec, CA, USA), the methanol was removed using a vacuum evaporator (Eyela, Tokyo, Japan) at 45°, and extract so obtained (MAH) then stored at -20° until use. Ovalbumin (Grade V, OVA) was purchased from Sigma-Aldrich, St Louis MO, USA. Before use, OVA was detoxified using a DetoxiGel column (Pierce, IL, USA).

For quality assurance of Agastachis Herba, analysis of MAH was carried out by HPLC method. The HPLC system consisted of Agilent 1200 series (Agilent, USA) and a YMC PAK pro C18 column (4.6×250 mm, 5 μm). The mobile phase consisted of water containing 1% acetonitrile (mobile phase A) and water containing 1% acetic acid (mobile phase B). The mobile phase flow rate was 0.5 ml/min and the split ratio to the HPLC was 25:75 and the detector wavelength was 330 nm. Rosmarinic acid (Sigma-Aldrich, USA) was used as standard. Methanol stock solution of rosmarinic acid was diluted to different concentrations. Ten milligrams of MAH extract was dissolved into 1.0 ml of methanol and then filtered using 0.45 μm syringe filter. The concentration of rosmarinic acid in MAH was calculated from the following equation: Y=(2 532 338X)-2 356 667.

It was found that there was 0.04 mM of rosmarinic acid in 10 mg/ml concentration of MAH (fig. 1). The experimental protocols employed have previously been described in detail [9]. Briefly, 200 μl of phosphate buffer saline (PBS) or emulsion containing 100 μg of OVA and 2 mg of aluminum hydroxide were injected to each of the mouse intraperitoneally for day 1 and day 14. Eight days later, mice were anesthetized with intraperitoneal injection of ketamine (100 mg/kg) and xylazine (10 mg/kg), and received intranasal instillation of 30 μl of PBS containing 25 g of OVA for three consecutive days (day 22, 23 and 24). MAH extracts were given for ten consecutive days in the morning from day 15 to day 24 (fig. 2). 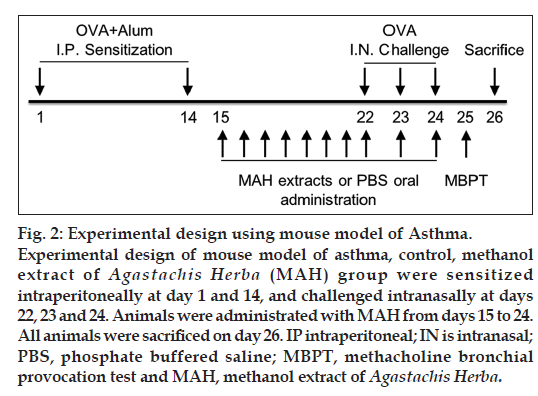 The experimental groups are as follows; 1) Naïve, sensitized but not challenged, fed with PBS. 2) Control, sensitized and challenged with OVA, fed with PBS. 3) MAH, sensitized and challenged with OVA, fed with MAH. Seven-week-old male BALB/c mice were randomly divided into eight groups: 10, 30 and 100 mg/kg MAH-treated, PBS-treated, control and naïve group. Each group consists of nine mice. Ten mg/kg is recommended daily dosage of MAH in Korean medicine. Each concentration of MAH was administered by oral intubation for 10 days, and the naïve group and PBS-treated control group was given the same volume of PBS by oral intubation. At the end of the treatment, animals were sacrificed and samples including bronchoalveolar lavage fluid (BALF), blood were collected for analysis.

On day 26, to obtain BALF, mice were sacrificed with a lethal dose of ketamine and xylazine, then BALF was collected via trachea. Mice were given 1.8 ml of PBS into lung, and more than 1.5 ml of buffer was consistently retrieved. BALF cells were analyzed using the protocols previously described [12]. Briefly, differential cell counts were performed by counting on cytospin preparations followed by staining with Diff-Quick (Dade Behring, Switzerland). Mice were bled on day 26, blood samples were placed at 4° overnight and centrifuged at 2800×g for 10 min to obtain sera. The OVA-specific IgE in serum was measured using ELISA. The experimental protocols employed have previously been described in detail in our previous report [9], and the protocols were performed according to the manufacturer’s protocol (BD Pharmingen, USA).

On day 26, after obtaining the BALF, the lung and trachea were dissected out and fixed overnight in 4% formalin. Specimens were dehydrated in alcoholic series, embedded in paraffin wax, and then sectioned with 5-μm thickness. Sections were placed on a glass slide, stained with hematoxylin and eosin, and examined under light microscope.

The data are expressed as the means±SD, and all statistical comparisons were analyzed by one-way analysis of variance followed by Duncan’s multiple comparison test. The SPSS version 18 (SPSS Inc, USA) was used for statistical analysis. Statistical differences with a value of P<0.05 were considered as significant.

Inflammatory cells were significantly increased in BALF in Control group (OVA+Alum), and treatment with MAH significantly decreased total cells including macrophages and other inflammation-related immune cells (fig. 3). A hallmark of asthma can be eosinophilic inflammation, and MAH treatment showed remarkable decrease of BALF eosinophils in all the applied dosage. 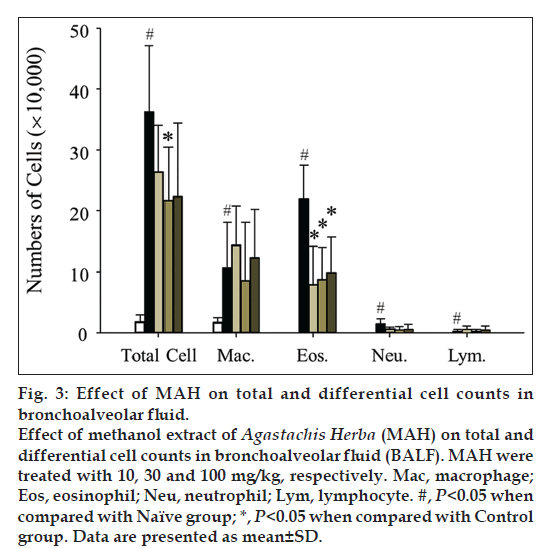 Fig 3: Effect of MAH on total and differential cell counts in bronchoalveolar fluid.

We examined AHR induced by methacholine inhalation. AHR resistances were measured as Penh values at day 25. AHR of control group was significantly increased compared with that of naïve group (fig. 4). After exposure to 50 mg/ml of methacholine, Penh value of the control group was increased by 401% of that of naïve group (9.87±3.25 vs. 2.46±1.23). With MAH100 treatment, Penh value was decreased by 43.67% of that of control group (4.31±1.82 vs. 9.87±3.25, fig. 4). Marked increases in levels of OVA-specific IgE were observed in the Control group, whereas MAH groups showed statistically significant downward changes of IgE levels (fig. 5). 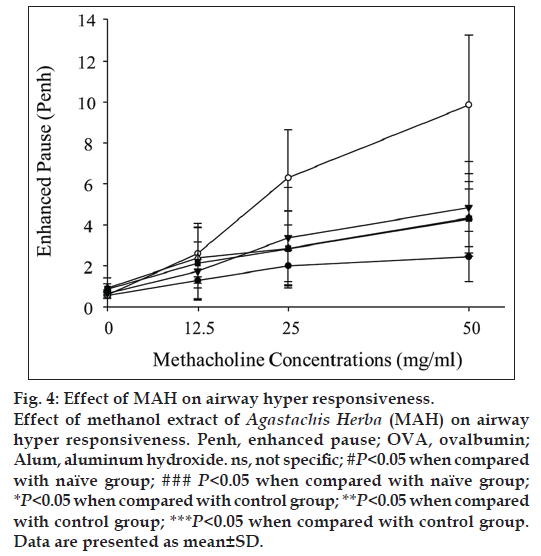 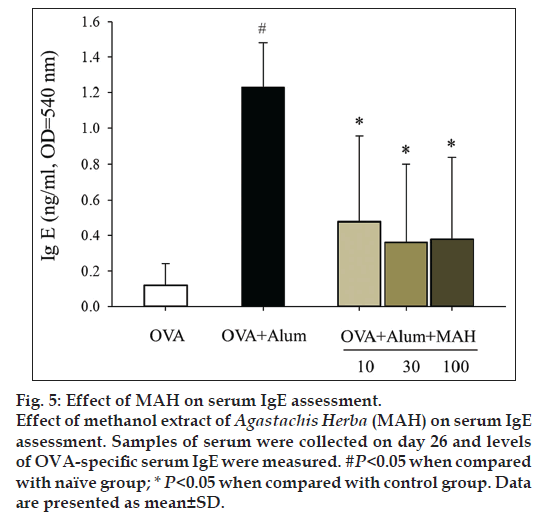 Agastachis Herba in Korean traditional medicine has been employed to eliminate dampness, arrest vomiting, and relieve exterior syndrome and summer-heat. The nature of the herb is pungent in flavor, so the flavor can eliminate dampness, regulate the functions of internal organs. Many Koreans use this medicinal herb as food additive due to its flavor and medicinal properties. However, only a few studies have reported its bioactive properties [13-15]. Amanda et al. previously reported the tracheal smooth muscle relaxant effect of A. mexicana and suggested that it could be used as antiasthmatic agent [4]. This report prompted us to evaluate the antiasthmatic potential of Agastachis Herba on a mouse model of asthma.

Currently, corticosteroids are the most commonly used drugs to control airway inflammation, however, corticosteroid therapy is associated with adverse effects, and some patients are completely corticoid resistant or fail to show clinical improvement after high dose glucocorticoids treatment [16]. Therefore, development of safer and effective antiasthmatic drugs with unique mechanisms of action is an important area of research [16]. Consequently, efforts should be made to identify new antiasthmatic remedies, preferably of natural origin, for mitigating these disorders.

AHR is a particular feature of asthma leading to recurrent episodes of shortness of breath, wheezing and cough [18]. We evaluated AHR changes using methacholine challenge test, and MAH administration decreased AHR values to levels similar to those observed in the naïve group (fig. 4). Asthma has been associated with IgE production, and recent studies of the effects of antiIgE therapy have confirmed that IgE played an important role in asthma [19,20]. Balza et al. reported that there is a positive relationship between airway IgE expression and serum IgE levels [20]. In our study, the expression of IgE in serum markedly increased in the control group compared to the naïve group, but MAH administration significantly decreased the IgE serum level (fig. 5).

In conclusion, MAH effectively suppressed inflammatory cell infiltration into bronchoalveolar region. AHR and airway remodeling in OVA-induced asthma also was ameliorated by MAH treatment. We have demonstrated that WG and RG could regulate serum level of IgE which is an important biomarker of asthma. However, as most medicinal herbs have multiple components, it is still unclear whether which component plays key role in above activities. Therefore, further studies are needed to identify the key molecules underlying these effects and efficacies.