A simple HPLC method was developed and validated for the quantification of zanamivir in permeability studies using Caco-2 cell culture model. Chromatographic resolution was achieved using 98% (v/v) ultrapure water and 2% (v/v) acetonitrile as mobile phase with flow rate of 0.5 ml/min on a BDS Hypersil Cyano column (length 250 mm; internal diameter 4.6 mm; particle size 5 μm) and UV detection at 230 nm. The method was linear for the quantification of zanamivir at concentration ranging from 0.1-10 μg/ml with coefficient of determination greater than 0.999. The recovery of zanamivir was in the range of 99.76-105.08%. The relative standard deviations of the within-day precision and between-day precision were lower than 10.32 and 14.33%, respectively. The permeability of zanamivir was independent of the transport direction and zanamivir concentrations, indicating a passive transport of zanamivir across Caco-2 cells. With the absence of Ca2+ in transport medium, the permeability values of zanamivir increased 56.21 and 57.20 fold in the directions of apical to basolateral and basolateral to apical, respectively. On the basis of these results, zanamivir was found to be predominantly transported across Caco-2 monolayers via the passive paracellular pathway.

Zanamivir has been indicated to provide activity against influenza viruses [1-3]. Each year, influenza viruses continue to cause major health problems and economic loss worldwide [3,4]. Especially, A(H1N1) and H5N1 influenza viruses lead to an unacceptable number of deaths and serious concerns about global flu pandemics [1,5-7]. Influenza viruses carry two surface glycoproteins, a hemagglutinin and a neuraminidase, which are involved in the production processes for new virions [8]. Hemagglutinin binds to the cell surface by recognizing the cellular sialic acid receptor [9] Neuraminidase cleaves the terminal sialic acid residues and releases progeny virus from the surface of infected cell [10].

The World Health Organization (WHO) recommends two neuraminidase inhibitors, oseltamivir (Tamiflu® ) and zanamivir, for the treatment of A(H1N1) and H5N1 flu. Zanamivir has been reported to have activity against oseltamivir-resistant H1N1 and the H5N1 influenza viruses [7,11,12]. Unlike oseltamivir, zanamivir can not be orally administered due to its poor oral bioavailability (~2%) [8,13,14]. A study revealed that a median of 10 to 20% of an inhaled administration of zanamivir was systemically absorbed leading to low serum concentration [14]. Therefore, zanamivir has been launched to the market only in a dry powder form for inhalation [8,13].

To date, no study reports on the mechanism of zanamivir absorption via human gastrointestinal tract or a satisfactory explanation of the factors causing low bioavailability have been undertaken or published. An understanding of the mechanism of absorption would be a remarkable milestone in the development of a formulation, which could improve oral bioavailability of zanamivir. The Caco-2 cell culture model is commonly employed to study mechanisms of drug absorption in vitro [15-17]. The aim of this study was the evaluation of zanamivir transport across Caco-2 model using a validated HPLC method.

The Waters HPLC system (model Alliance 2695) consisted of a pump and autosampler, connecting with a UV Detector (model Waters 2996). The Empower QuickStart 2514 for data processing was used. The chromatographic resolution was carried out using a BDS Hypersil Cyano column (length 250 mm; internal diameter 4.6 mm; particle size 5 μm), and with UV detection at 230 nm. The guard column was the same material as the analytical column. The temperature of column was around 25°. The mobile phase was composed of 98% ultrapure water and 2% acetonitrile (v/v) with a flow rate of 0.5 ml/ min. Each sample was injected with the volume of 10 μl. A 10 mg/ml stock zanamivir solution was prepared in ultrapure water. Standard zanamivir solutions in Hank’s balance salt solution (HBSS) at a concentration range of 0.1-10 μg/ml were obtained by serial dilutions. The internal standard (IS), OC at concentration of 2 μg/ml, was added into each working solution.

Caco-2 cells (passage: 45-53) were grown in vent capped 75 cm2 tissue culture flasks at 37° in a humidified atmosphere of 5% CO2. The culture medium composed of Dulbecco’s modified Eagle’s medium supplemented with 10% fetal bovine serum and 1% L-glutamine. Caco-2 cells were seeded at a density of 220,000 cells/cm2 onto 12-well Transwell® plate with an polycarbonate membrane insert at pore size of 3.0 μm. Cells were fed every other day and maintained at 37° and 5% CO2 humidified atmosphere for 21 days. The transepithelial electrical resistance (TEER) values for the integrity of the cell monolayer were measured using a Millicell-ERS volt/ohmmeter (Millipore Corp., Bedford, MA).

The cytotoxicity of zanamivir solutions at concentrations of 300 and 400 μg/ml was performed by the 3-(4,5-Dimethyl-2-thiazolyl)-2,5-diphenyl-2Htetrazolium bromide (MTT) assay [19]. Caco-2 cells were seeded onto a 96 well plate at a density of 1×104 cell/well in 100 μl medium for 24 h in the incubator at 37° and 5% CO2. After 24 h incubation, growth medium in each well was replaced with fresh medium containing zanamivir solutions at final concentrations of 300 and 400 μg/ml. The plate was incubated for another 3 h. The zanamivir solutions were replaced with 100 μl MTT (0.5 mg/ml in HBSS, pH 7.4) and incubated for another 4 h at 37°. Subsequently, the MTT medium was removed and the formazan crystals dissolved in DMSO, gentle shaking for 10 min to achieve complete dissolution. The optical density (OD) was measured at 540 nm. Six replicates of each test sample were performed. Every test included a control well containing complete culture medium with cells and a blank containing complete medium without cells.

Before performing the transport studies, Caco-2 cells were washed twice with warm HBSS. After the wash, the plates were pre-incubated at 37° for 45 min. After the wash, the TEER values were measured and the inserts with TEER values above 600 ohm. cm2 were used in the studies. Zanamivir solutions at concentrations of 300 and 400 μg/ml were employed in the study. HBSS was replaced with 0.5 and 1.5 ml of zanamivir solutions either into the apical or into the basolateral compartment with respect to the cell layer to study transport from apical to basolateral (AP-BL) and bi-directional transport from basolateral to apical (BL-AP) side, respectively. The cells were then incubated at 37° and 5% CO2. At 30, 60, 90, 120 and 180 min time points, HBSS in the acceptor chambers was collected for analysis and replaced with equal volume of fresh warm HBSS. A fluorescent marker, lucifer yellow, was employed as a paracellular maker for checking the integrity of Caco-2 cell junction during the transport study. The apparent permeability coefficient, Papp (cm/ sec), was calculated using the following equation: Papp = (ΔQ/Δt)×(1/A×1/Cdonor), Where, DQ/Dt is the permeability rate (ng/s), A is the insert area of the transwell (cm2), Cdonor is the initial drug concentration added to the donor chamber (ng/ml).

The reversed phase C18, C8 and C4 columns were initially employed in this study; however, components present in the HBSS co-eluted with zanamivir. The BDS Cyano column could solve these interference problems. By using the developed HPLC system, zanamivir and OC were eluted at 6.69 and 9.32 min, respectively (fig. 1). The standard curve of zanamivir solutions at a concentration range from 0.1-10 μg/ ml gave the coefficient of determination higher than 0.999 (fig. 2) indicating that the equation for the quantification of zanamivir concentration in HBSS was defined. The lower limit of quantification for the method was 0.1 μg/ml. The recovery of zanamivir at concentration of 0.1, 5 and 10 μg/ml was in the range of 99.76-105.08% (Table 1). The accuracy of the results proved that the mean test results were close to the true concentrations of analyte.

The values reported were the mean±SD of six determinations. Figure 1: Overlay HPLC chromatograms of (a) zanamivir and OC spiked in HBSS and (b) HBSS
(a) The separation of zanamivir and OC in HBSS using a BDS Hypersil Cyano column (length 250 mm; internal diameter 4.6 mm; particle size 5 μm). The termperature of column was in the range of
25°C. The mobile phase was composed of 98% ultrapure water and 2% acetonitrile (v/v) with a flow rate of 0.5 ml/min. Zanamivir and OC were detected at 230 nm. (b) The chromatogram of eluting peaks
of HBSS under identical experimental conditions. 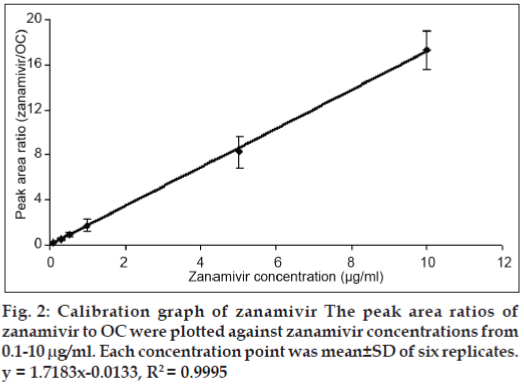 The values of relative standard deviation (RSD) for within-day precision were between 5.32-10.32%, while those for between-day precision were lower than 14.33% (Table 2). The recovery of zanamivir at concentrations of 0.1, 5 and 10 μg/ml was in the range between 97.43 and 102.14% after three freezethaw cycles (Table 3). The short-term temperature stability for 36 h at room temperature was based on the duration that samples were maintained for the intended study. The recovery of the short-term temperature stability at concentrations of 0.1, 5 and 10 μg/ml was 95.65, 102.73 and 101.02%, respectively (Table 3). The results of stability test demonstrated that zanamivir was stable and no degradation of the drug was found due to the freeze-thaw process and zanamivir was stable in HBSS at room temperature for at least 36 h.

Each value reported was from the analysis of six determinations

The values expressed were from the analysis of six determinations.

The values reported were carried out in triplicate.

Table 4: Permeability of zanamivir at concentration across caco-2 monolayers under different transport conditions BL-AP The apparent permeability of zanamivir at two different concentrations (300 and 400 μg/ml) across Caco-2 monolayers from apical to basolateral chamber and bi-directional transport from basolateral to apical compartment. The values reported were carried out in triplicate.

The authors thank the Thailand Research Fund for financial support (Grant No. TRG5080004).