About one‑third of the annual hospital budget is spent on buying materials and supplies, including medicines [1]. The drugs consume approximately 60% of total consumable budget [2]. Therefore, pharmacy is one of the most extensively used therapeutic centres of a health facility, where a large amount of money is spent on purchases on a recurring basis. Further, many a time drugs go out of stock and expire before its use. Absence of or lack of sufficient drugs in pharmacy may lead to poor health care delivery and bad reputation. Thus, the need for planning, designing and organising the pharmacy in a manner that results in efficient clinical and administrative services becomes all the more pertinent in this situation.

Inventory control is a scientific system which indicates as to what to order, when to order, and how much to order, and how much to stock so that purchasing costs and storing costs are kept as low as possible. It helps to protect against the fluctuation in supply and demand, uncertainty and minimise waiting time [3]. There are various methods involved for inventory control but two are commonly used: Always, better and control (ABC) and vital, essential and desirable (VED). ABC analysis helps in identifying the items that require the greater attention for control. In this, 10% items consume about 70% of the budget (Group A). The next 20% inventory items take away 20% of the financial resources (Group B) and the remaining 70% items account for just 10% of the budget (Group C) [4]. VED analysis is based on critical values and shortage cost of the item. Based on their criticality, the items could be classified into three categories: Vital, essential and desirable, i.e., VED. A combination of ABC and VED analysis (ABC– VED matrix) can be gainfully employed to evolve a meaningful control over the material supplies. Category I includes all V and E items (AV, BV, CV, AE, AD). Category II includes the remaining items of the E and B groups (BE, CE, BD). Category III includes the desirable and cheaper group of items (CD) [4,5].

Cost analysis has been found to be effective in the management of a medical store [1,6]. A study from a 1500‑bedded state‑funded hospital has claimed that review and control measures for expensive drugs brought about 20% savings (3.3 million) [7]. Several other studies have shown that inventory control techniques when made a routine practice in health care could bring about substantial improvement not only in the patient care but also in optimal use of resources by judicious practice of these methods [5,6,8,9]. Therefore, the present study was undertaken to do economic analysis of the drug store under the Department of Community Medicine of a Medical College in Delhi. ABC, VED and ABC–VED matrix analysis was carried out to identify the categories of drugs requiring stringent management control.

The field practice areas were often faced with multiple issues related to inventory control, such as stock‑outs of some essential drugs, expiry of the drugs, and a number of local purchases. Therefore, the authors chose to employ inventory control techniques such as ABC–VED analysis for the drugs available in the drugs store of the department. No such analysis was being carried out in the department. This was necessary to do as it would help in improving the quality of health care services being delivered at lesser inventory and would help to reduce stock outs of some important drugs.

The study was approved by Department Ethical Committee and prior permission was taken from the relevant authorities. The data for annual consumption and expenditure incurred on each drug of the drug store, for the financial year 2010‑2011 was collected and fed into MS Excel spread sheet. The drug indent for the financial year 2010‑2011 consisted of 129 drugs. Following steps were undertaken to do ABC–VED analysis of the drug indent:

In step 3, The VED criticality analysis of all the listed items was performed by classifying the items into vital (V), essential (E) and desirable (D) categories. Since, the inventory of drugs was for the field practice area of the department and not hospital, therefore the classification of drugs into VED was carried out keeping in mind the role and functions of a primary health centre. The items critically needed for the survival, are part of national programmes and those that must be available all the times as their nonavailability can seriously affect the image of the health centre were included in the V category. The items with a lower criticality need and those, whose shortage can be tolerated for a short period at the health centre, were included in the E group. The remaining items with lowest criticality, the shortage of which would not be detrimental to the health of the patients, were included in the D group. The VED status of each item was discussed with justification by a faculty member, a senior resident and a postgraduate student.

Finally in Step 4, A matrix was formulated by combining the ABC and VED analysis to evolve a management system, which can be used for prioritisation. From the resultant combination, three categories were classified (I, II and III). Category I was constituted by 37 items belonging to AV (4 drugs), AE (13 drugs), AD (7 drugs), BV (3 drugs) and CV (10 drugs) subcategories. The BE (12 drugs), CE (25 drugs) and BD (16 drugs) subcategories constituted category II and contained total of 53 items, and the remaining items in the CD (39 drugs) subcategory constituted category III. In these subcategories, the first alphabet denotes its place in the ABC analysis, while the second alphabet stands for its place in the VED analysis. 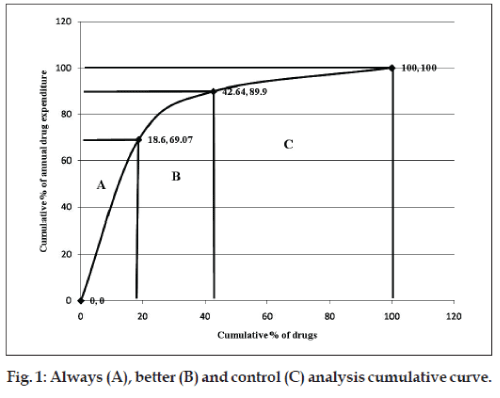 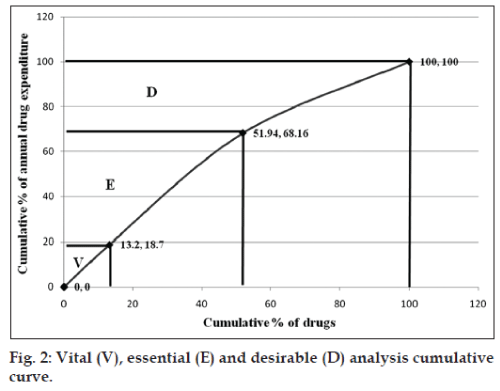 Combining ABC–VED classification, the drugs can be coupled into the following groups: Category I: AV+BV+CV+AE+AD=37; category II: BE+BD+CE=53 and category III: CD=39 (Table 2).

Table 2: Always, better and control–vital, essential and desirable matrix analysis of the drugs (n-129) in the drug store. 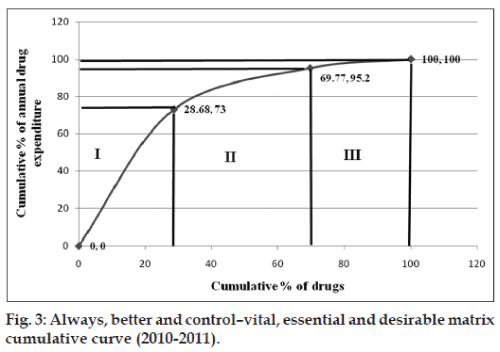 Provision of care in health centre is sensitive to the timely availability of facilities, including drugs. In case of drugs, besides the criticality factor, the cost factor must also be taken into consideration, as can be seen from our study, where about 20% of the drugs consumed about 70% of ADE of the pharmacy. This is the group, requiring greater monitoring as it has fewer drugs consuming most of the money. We also noted that not all the drugs in this group were V or E. It also had drugs from the desirable category. Categorization of drugs by the ABC–VED matrix model helps to narrow down on fewer drugs requiring stringent control.

The results of the analysis of the present study showed that if ABC analysis is carried out alone for drug inventory, it would effectively control the recommended 24 (18.6%) items in the A category, with almost 70% of ADE of the pharmacy, however, it would compromise on the availability of items of V nature from B and C categories (13 items, 10.1%).

Similarly, if only VED analysis is considered, ideal control can be exercised on the identified V and/or E group accounting for 68.2% of ADE of the pharmacy. However, we found that our Group A also contained seven desirable drugs. Hence, it was not possible to ignore the desirable group totally. The comparison with similar studies in India showed high variation in the percentage of V, E and D items (Table 3). The present analysis of inventory control was carried out in a drug store of a department which is providing only outpatient primary health care services, whereas other studies have been carried out in tertiary level hospitals. The difference in level of care being provided by the health centre and that by the hospital accounts for difference in the drug inventory list and thus, variations in the results of current study with similar studies carried out elsewhere.

To conclude, during the year 2010‑2011, items of approximately Rs. 435,847 were issued by the drug store of Department of Community Medicine to its health centres. This necessitates application of scientific inventory management tools for effective and efficient management of the pharmacy stores, efficient priority setting, decision making in purchase and distribution of specific items and close supervision on items belonging to important categories. ABC and VED analysis identifies the drugs requiring stringent control for optimal use of funds and elimination of out‑of‑stock situations in the pharmacy.