Medicinal plants play a major role in the discovery of new therapeutic agents for drug development. India is a rich source of medicinal plants and market value of all therapeutically important plant species is increasing day by day [1]. Traditionally, natural products have been a source of lead molecules in drug discovery. However, natural products have been de-emphasized as high throughput screening resources in the present, because of difficulty in obtaining high quality natural products. New technologies such as mass spectrometry, nuclear magnetic resonance spectroscopy (NMR) and other spectroscopic techniques can greatly facilitate structure elucidation process for creation of high quality natural product libraries [2].

The genus Memecylon (Melastomataceae), is used for medicinal purposes in Asia-Pacific regions. It consists of more than 300 species. In India, the genus is represented by about 40 species out of which 21 are endemics. The Western Ghats is the major centre of Memecylon diversity. In Ayurveda and Siddha, several Memecylon species are reported to be used by tribals in the treatment of skin disorders, herpes, chickenpox, stomach disorders, leucorrhoea, polyuria, menorrhagia, dysentery and also in the treatment of bacterial infections and inflammation [3]. Several pharmacological activities such as, antimicrobial, antiinflammatory, antidiabetic properties including some of the phytoconstituents such as, apigenin, isorhamnetin-3-O-glycoside-7-Oglycoside etc. are reported from Memecylon species [4-6].

TLC of methanol extracts of Memecylon species was carried out on silica gel (TLC silica gel 60 mesh, 20×20, 0.5 mm, Merck and Co, Inc) with methanol:acetone (8.7:1.3) solvent system. The methanol extract was spotted and the solvent front was allowed to run for approximately 16 cm. The running lane was then dried thoroughly; elution of compound was detected at 260 nm. The bands corresponding to active compound by initial screening were scraped out and the compounds were washed out of silica gel with methanol. The obtained methanol solutions were filtered and subjected to HPLC analysis for further purification. A TLC bioactive fraction of Memecylon species extract was subjected to HPLC. Analytical HPLC (Waters, 10 ATVP) was performed with a reversed phase C18 column using LC-10-ATVP double unit pumps. The analytical chromatography was carried out under isocratic conditions with mobile phase of methanol and water (99:1) using a flow rate 1.0 ml/min and chromatogram recorded at wavelength of 292 nm using a SPD-10AVP multi-wavelength detector. Sample were dried and dissolved in methanol.

The NMR spectrum of the purified compound of M. talbotianum was recorded on a Bruker Avance-III 400 Hz spectrometer equipped with BBFO probe and connected with VT Unit (temp. range from −80°+130°). 1H NMR was recorded in deuterated dimethyl sulfoxide (DMSO) and 2D data were acquired in CD3 OD at a temperature of 300 K.

The TLC analysis of methanol extracts of five Memecylon species showed single band with RF value 0.61 detected at 260 nm (Figure 1). This band was filtered and subjected to HPLC analysis for further purification. 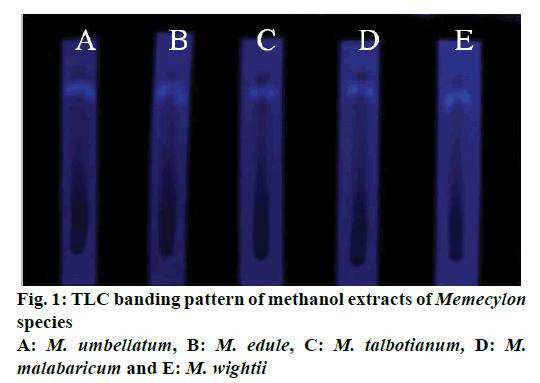 Among five Memecylon species, M. malabaricum and M. talbotianum showed highest concentration of α-tocopherol. Hence the bioactive fractions of these two plant species were purified using preparative HPLC and then subjected to LC-MS for the detection and confirmation of bioactive molecule. Among these two fractions, M. talbotianum fraction showed a single major peak in LC-MS with a molecular mass of 429.391 (ion positive mode, Figure 3). Hence this fraction was subjected to NMR spectra analysis for confirming the structure of the molecule. Traditional knowledge about the therapeutic potential of plants is necessary to isolate and identify biologically active products from plants [7]. Therefore, isolation and identification of bioactive compounds present in a crude extract serve as the building block for the development of new type of therapeutics with new mechanisms of action [8]. Traditionally, natural products have been a source of lead molecules in drug discovery. However, natural products have been de-emphasized as high throughput screening resources in the present, because of difficulty in obtaining high quality natural products. New technologies such as mass spectrometry, NMR and other spectroscopic technique can greatly facilitate structure elucidation process for creation of high quality natural product libraries. In the current study, methanol extracts of Memecylon species were selected as bioactive fractions. TLC and HPLC analysis showed the active compound is α-tocopherol. α-tocopherol is also identified in several other plants such as Cyamopsis tetragonoloba, Moringa oleifera, Stevia rebaudiana, Millingtonia hortensis and Jasminum sambac through GC-MS analysis [9-13].

The authors acknowledge the recognition of University of Mysore as an Institution of Excellence and financial support from the Ministry of Human Resource Development, Govt. of India through UGC under UOM/IOE/RESEARCH/1/2010-11, dated: 22-04- 2010 project and UGC fellowship scheme (Or. No. DV9/192/NON-NETFS/2013-14 dated: 11-11-2013).