Marine ecosystem and its organisms, particularly the invertebrates are recent targets of bioprospecting and mining for a large group of structurally unique natural products encompassing a wide variety of chemical classes such as terpenes, polyketides, acetogenins, peptides and alkaloids of varying structures, having pronounced pharmacological activities. In view of the limited reports on the antibacterials produced by bacteria, isolated from marine sponges, corals and bivalves of Indian origin, the present study is aimed at investigating the antagonistic activities of 100 heterotrophic, halophilic bacterial bionts isolated from 9 sponges, 5 corals and one bivalve. Culture broths of 46 of these bionts were active against human pathogenic bacteria namely Staphylococcus citreus, Proteus vulgaris, Serratio marcesans, Salmonella typhi, Aerobacter aerogenes and Escherichia coli. Further, the ethyl acetate extracts of cell free supernatant confirmed the presence of extracellular bioactive factor, by agar cup diffusion method. Interestingly, highest number of bionts having activity was isolated from corals followed by sponges and bivalve. The study clearly demonstrates that bacterial bionts of marine invertebrates are a rich source of bioactive secondary metabolites against human bacterial pathogens.

Soil has been widely explored as the source of microorganisms possessing a large number of bioactive molecules. However, the continual and cyclic need of new antibiotics to combat the emerging resistant forms of bacterial pathogens has led to the exploration of newer econiches and biota, thereof. Marine ecosystem and its organisms, particularly the invertebrates, such as sponges, coelenterates (sea whips, sea fans and soft corals), tunicates, molluscs (nudibranchs, sea hares), echinoderms (starfish, sea cucumbers) and bryozoans (moss animals) [1,2] are recent targets of bioprospecting and mining for a large group of structurally unique natural products encompassing a wide variety of chemical classes such as terpenes, polyketides, acetogenins, peptides and alkaloids of varying structures representing and having pronounced pharmacological activities [3]. The diversity of marine organisms and the highly competitive environmental habitats in which access to space and nutrients are limited is responsible for this stunning variety.

One school of thought is that these marine invertebrates combat potential invaders, predators or competitors by producing secondary metabolites as chemical weaponry of their defence mechanisms [4]. Several of these metabolites have been characterised to be enzymes, haemolytic factors and antibiotics. In the recent years, however, investigations reveal that these bioactive factors may not be products of the marine invertebrates but may actually be produced by the microorganisms associated and/or inhabiting the sessile hosts [1,5-8]. Additionally, it is increasingly becoming evident that numerous natural products from marine invertebrates have striking structural similarities to metabolites of microbial origin. This poses a serious question on the role of host-associated microbes: Whether these are the true source of the metabolites used in defence by the host or whether these are intricately involved in biosynthesis of the metabolites used in defence [1]. Studies in these lines have demonstrated that microbes associated with invertebrates far exceed, in their bioactivity, as against that produced by free living planktonic bacteria [9,10]. In spite of this, there are limited reports on studies attempting to retrieve bacteria inhabiting marine invertebrates of Indian origin, into cultures, and scrutinising their antibacterial activity [11-13].

Bacterial bionts were isolated by plating aliquots of saline macerates of tissues of sponges/corals/bivalve collected from Tamil Nadu on the South-Eastern coast of the Indian peninsula situated at (Lat. 09°19′ 37.3″N and Long. 79°10′ 20.5″E), onto nutrient-rich sterile, tryptone yeast extract agar (TYE) [21] having (g/l) MgSO4-20; CaCl2-0.2; Tryptone-5; Yeast extract-3, adjusted to pH 7, using 1 N NaOH and solidified with Agar 1.5. TYE supplemented with 3% NaCl and 25% NaCl, refered, hereafter as, (3%TYE) and (NTYE) [22-24], respectively. Colonies were purified and identified following schemes given by Smibert and Krieg, and Holt et al. [23,24] and maintained on TYE agar slopes having 3/25% NaCl. All the chemicals used were from Himedia, Mumbai, India.

Individual bacterial bionts were inoculated into 5 ml of 3% TYE and NTYE. After 2/7 days, aliqouts were dispensed into agar cups, borne onto Mueller Hinton agar spread plated with the individual pregrown human bacterial pathogens.

Individual bacterial bionts were cultured in 3% TYE and NTYE at R.T. (22-28°) for a minimum of 2 days and a maximum of 7 days at 150 rpm. The cell-free supernatant obtained on separation of cells by centrifuging at 12,000×g for 20 min at 4° was extracted three times in ethyl acetate (EA), concentrated to dryness under vacuum using rotary evaporator (Buchi, Essen Germany). Crude extract was dissolved in methanol and used for bioactivity studies.

Mueller Hinton agar plates of 3 mm thickness were seeded with the pregrown bacterial pathogens. Four milligram per litre of crude extracts was dispensed into agar cups, 6 mm in diameter borne onto the Mueller Hinton agar plates. The plates were kept standing at low temperature (4°) for 15 min, incubated at 37° and monitored for growth over a period of 24 h. Assay was carried out in triplicates and mean was recorded. Controls were maintained for each test pathogen. Each experimental data set was carried out aseptically. Zones of inhibition were measured in mms and data was computed using the earlier reported quantification procedure [25] to obtain:

where SPASDAASTP1-6 is the percent area specific differential antibiotic activity score of test pathogens 1-6 and TPS is total possible score for all test pathogens (i.e., 100×6=600).

Percent overall screening efficiency score (POSES). This is computed by, 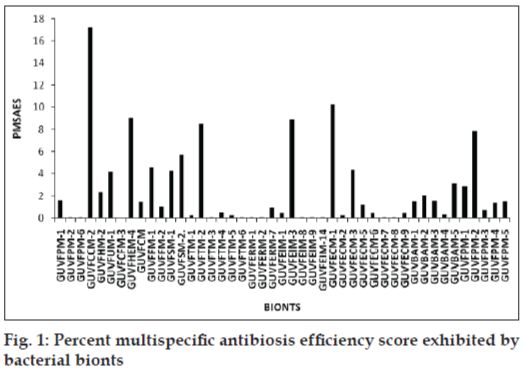 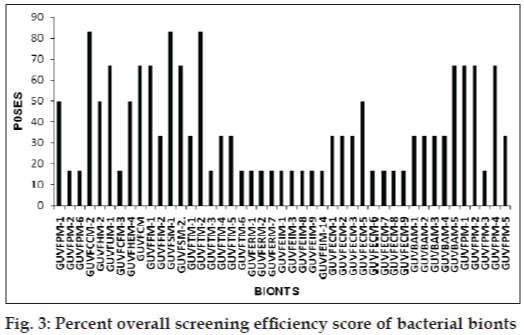 Further, the percent overall screening efficiency score of antibacterial activity (POSES) exhibited by bionts was computed by scoring presence or absence of zones by bionts against indicator cultures and depicted in fig. 3. Highest score of 83.33% was given by sponge bionts GUVFCCM-4 and GUVFSM-1 and coral biont GUVFTM-2.

The study was an attempt to investigate the antibacterial activity of bacterial bionts from sponges, corals and bivalves thought to be involved in the epibacterial chemical defence of the host [17], in this regard, it was a noteworthy observation that 46 isolates out of the 100 screened, showed promising antibacterial activity. These bionts having activity against multidrug-resistant clinical pathogens, isolated from hospital patients, have potential to serve as drug candidates. The inhibition of the pathogens by the extracts obtained from the invertebrate-associated bacteria strongly supports the hypothesis of the microbial origin of the compounds formerly ascribed to these macro invertebrates as there are several reports on the antibacterial potential of the marine invertebrates used in this study [12,26,27].

Our study corroborates with the findings of Chen et al. [29] in that approximately 50% of the culturable bionts exhibited antibacterial activity. The results thus confirm that invertebrate-associated microorganisms are highly potential resources of bioactive natural products [30].

The absence of antimicrobial activity in the remaining 50% bionts in the bioassays conducted does not necessarily indicate a lack of antimicrobial chemical defence, as the diffusion assay only measures cell death, however, there are reports of inhibition of other phenotypic characteristics such as chemotaxis, swarming attachment and swimming, which is also a means of counteracting bacterial invasion. Another proposed hypothesis by Geffen and Rosenberg [31] for no bioactivity of some of the isolates could be that the release of the bioactive factor is only seen following induction by deleterious microorganisms and mechanical stress which was not done in our present study. It could also be possible that the bioactive component was not extractable in the EA solvent or that it diffuses poorly in the agar medium employed. The demonstration of poor bioactivity by some bacterial isolates associated with the invertebrates is suggestive that the invertebrates resort to some other means of defence rather then production of chemical compounds as reported by Rublee et al [32].

The isolates having the greatest antimicrobial activity belonged to the genus Chromohalobacter, followed by Bacillus and Corynebacterium. The genus Bacillus have been well-known to produce lipoproteins, phenolic derivatives, aromatic acids, acetylamino acids (amino acid analogues), peptides [33], isocoumarin antibiotics and [34] bacteriocin like substances [35] having a broad antibiotic spectrum, the genus Corynebacterium is also increasingly reported as a source of bioactive agents capable of displaying competitive biosynthetic capabilities [36], however, the potential of the genus Chromohalobacter as a promising resource for antimicrobial compounds is fairly recent with no reports on the structure elucidation of the antimicrobial compound and scarce reports on its antimicrobial activity [29]. Thus, our first report on the isolation of halophilic bacterial strains from marine invertebrates as promising sources for the discovery of novel bioactive compounds is of immense importance.

The high proportion of strains producing antimicrobial compounds may be associated with an ecological role, i.e., a defensive action to maintain their niche, preventing the invasion of microbial competitors into an established microbial community. Thus, marine invertebrates represent an ecological niche harbouring a largely uncharacterised microbial community with unexploited potential sources of new secondary metabolites. Further chemical isolation and characterisation of active compounds from these bacterial extracts is under investigation, and findings will be reported in due course. As yet, there have been no published reports on the antibacterial activity of all the marine organisms discussed so far from the GoM. Thus, the present study is the first report and it proves that the EA extracts of marine bacteria associated with sponges, bivalves and corals are a promising resource having profound antibacterial activity, and thus may have potential use in medicine.