The antibacterial activity of leaf extract of mangroves, namely, Rhizophora mucronata, Sonneratia alba and Exoecaria agallocha from Chorao island, Goa was investigated against human bacterial pathogens Staphylococcus aureus, Streptococcus sp., Salmonella typhi, Proteus vulgaris and Proteus mirabilis. As compared to aqueous, ethanol extract showed broadâ??spectrum activity. The multidrugâ??resistant (MDR) bacteria Salmonella typhi was inhibited by the ethanol extract of S. alba leaf whereas the other two resistant bacteria Staphylococcus aureus and Streptococcus sp. were inhibited by the ethanol extract of leaves of all the species. The aqueous extract of S. alba and E. agallocha showed their activity against P. vulgaris and P. mirabilis, respectively. Phytochemical analysis revealed the presence of saponins, glycosides, tannins, flavonoids, phenol and volatile oils in the leaves of mangroves. Further studies using different solvents for extraction are necessary to confirm that mangroves are a better source for the development of novel antibiotics.

Infectious diseases are responsible for 14 million global deaths annually [1] and amongst them, bacterial infections are a major threat [2]. The only solution to this problem is use of antibiotics or chemicals. However, the increasing failure of chemotherapy and antibiotic resistance exhibited by bacterial pathogens has prompted researchers for screening of plants for their antimicrobial activity [3]. Thus, there is an urgent need to discover new antimicrobials for new and re-emerging bacterial diseases.

Mangroves, the littoral forests of tropics and subtropics are well known for their ecological importance. Mangroves are a rich source of several bioactive compounds such as steroids, triterpenes, saponins, flavonoids, alkaloids and tannins [4] having therapeutic significance. These plants have been extensively used in traditional medicine and different studies have revealed their activity against human, animal and plant pathogens. It has also been reported that these are an excellent source of antiviral compounds as compared to the seaweeds and sea grasses [5]. Boopathy and Kathiresan [6] described their tremendous potential against cancer cells. But very few snapshots are available on their antibacterial activity. Thus the current investigation falls on the antibacterial activity of the mangrove leaves of Sonneratia alba, Rhizophora mucronata and Exoecaria agallocha which are common in Chorao island (Lat. 15°36’N; Long. 73°52’E), Goa. All the samples were collected during the premonsoon season (May 2011). Collected samples were washed thrice with tap water and twice with distilled water to remove extraneous materials. The mangroves were taxonomically identified using identification keys [7] and voucher specimens were stored.

For preparation of aqueous extract, the mangrove leaves were shade-dried and powdered. Fifty grams of leaf powder of each species was soaked separately in a conical flask containing minimum quantity of double distilled water and frozen to –20°, thawed and frozen repeatedly for three times and blended and the extract was filtered through a fine meshed (100 μm) cloth, centrifuged at 10,000 g for 20 min and the supernatant was maintained at 4° till used. To prepare the ethanol extract, 50 g of leaf powder of each species was soaked in 200 ml of 80% ethanol for 72 h. The mixture was stirred at 24 h interval using a sterile glass rod. Then the extract was filtered through Whatman No. 1 filter paper (Whatman, England) and the filtrate obtained was concentrated up to 20 ml in vacuum using rotary evaporator. The extract was stored at 4°C until used.

Clinical isolates of both G+ve (Staphylococcus aureus and Streptococcus sp.) and G−ve (Salmonella typhi, Proteus vulgaris and Proteus mirabilis) bacterial strains were obtained from the Department of Microbiology, Goa Medical College and Hospital, Goa. The pathogens were maintained on Nutrient Agar (NA) (Hi Media Laboratories Pvt. Ltd., Mumbai) and used for the antibacterial assay. Disc method was used for assessing antibacterial activity of the extract. Whatman paper discs (5 mm diam.), impregnated with 62.5 mg/disc of concentrated leaf extract, were placed in NA plates inoculated with the test pathogen (106 bacteria/ml). The inoculated plates were incubated at 37°C for 24 h and the inhibition zones were measured around the discs (mm diameter). Efficiency of the leaf extracts were compared with commercial ampicillin and the solvent ethanol. All of the experiments were performed in triplicate and the results were expressed as the average of three.

The results of antibacterial activity of R. mucronata leaves extract are illustrated in fig. 1. The ethanol extract showed maximum zone of inhibition against S. aureus (16 mm) followed by 12.3 mm for Streptococcus sp. and minimum against P. mirabilis (11 mm). S. typhi and P. vulgaris was not inhibited by the ethanol extract whereas the aqueous extract did not inhibit any bacteria. The results of antibacterial activity of S. alba leaves extract are illustrated in fig. 2. The ethanol extract of S. alba showed its activity in all tested pathogens whereas aqueous extract was active only against P. vulgaris (6.7 mm). The highest inhibition zone was observed in ethanol extract against S. typhi (17 mm) followed by 16.7 mm for P. mirabilis, then 15 mm in case of P. vulgaris, 10.7 mm for Streptococcus sp. and lowest (10.3 mm) activity against S. aureus. 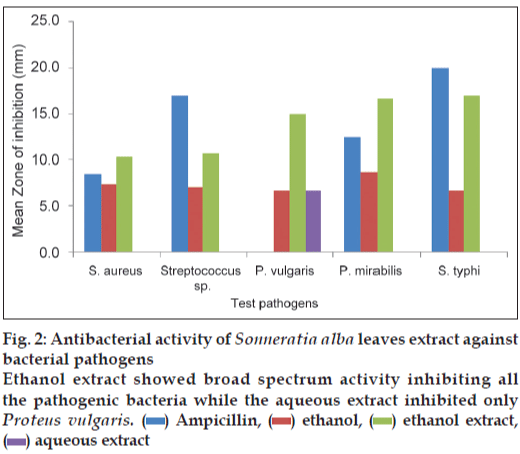 The results of antibacterial activity of E. agallocha leaves extract is illustrated in fig. 3. The ethanol extract of E. agallocha showed its activity in all the tested pathogens except S. typhi whereas the aqueous extract inhibited only P. mirabilis (16.0 mm). The ethanol extract showed maximum zone of inhibition of 16.7 mm against P. mirabilis and P. vulgaris whereas in S. aureus and Streptococcus sp., the inhibition zone was of 13 mm. Mangroves are a treasure house of therapeutic compounds [4]. There are few reports demonstrating about the antibacterial activity of mangroves. However, the antibacterial activity of mangroves may be influenced by some factors such as the habitat and the season of sample collection, different growth stages of plant and experimental methods. Although a variety of solvents have been employed in screening the mangroves for their antimicrobial activity, it is still not clear what kinds of solvent are the most effective and suitable for the preparation of extracts.

The emergence of MDR strains is a growing problem worldwide due to indiscriminate use of antibiotics. So it is very much essential to discover newer antimicrobials to counteract resistant strains. In the present investigation, Salmonella typhi, which is a MDR strain worldwide, was strongly inhibited by the ethanol extract of S. alba leaves indicating the presence of some bioactive compounds which might prove a potential drug in future for clinical application. To our knowledge, this is the first report on the antityphoidal property of mangroves.

Staphylococcus aureus, another MDR was also effectively inhibited by the ethanol leaf extracts of all the three mangroves whereas in case of ampicillin, the inhibition zone was comparatively less. The present investigation revealed higher inhibition of ethanol extract of R. mucronata and E. agallocha leaves on Staphylococcus aureus than the available literature cited by Abeysinghe [11] from Lumnitzera racemosa leaves extract. Sivaperumal et al. [12] screened the antibacterial activity of chloroform crude extract and column fractionated compounds from leaves of E. agallocha and revealed that compared to the crude extract, column-fractionated compounds were more active against S. aureus and S. pneumonia. Although in this study, no attempt was made with pure extracts, quite promising results were obtained against the MDR strains of Staphylococcus aureus and Salmonella typhi.

This study also highlights the antibiotic potential of S. alba and E. agallocha against P. vulgaris and P. mirabilis which are opportunistic pathogens showing resistance and moderate activity, respectively, to ampicillin. Overall, the mangroves of Goa have tremendous potential for the preparation of novel antibiotics against the pathogenic bacteria and especially on multidrug-resistant strains. Moreover, their antimicrobial potential needs to be extended against a panel of microorganisms responsible for most common microbial diseases. Further investigation is necessary to identify those bioactive compounds, which will be a platform for clinical applications.

We are thankful to the Director of NIO for providing all necessary facilities. The permission granted by the Deputy Conservator of Forests, Government of Goa for sample collection from Salim Ali Bird Sanctuary, Chorao island is greatly acknowledged. We also wish to acknowledge Dr. Jose and Dr. Ragya, Microbiology Department, Goa Medical College and Hospital for providing pathogenic bacterial strains and Dr. Samir Damare, Scientist, Gene Lab, NIO for providing rotary evaporator facilities. Above all, we appreciate the comments of anonymous reviewers for the improvement of the manuscript.