The hexane extract of Curcuma aromatica, a plant belonging to the family Zingiberaceae was tested on 10 bacterial strains (clinical isolates and standard strains). Agar diffusion method was adopted for determining the antibacterial activity of the extract. The hexane extract was found to be active against all Gram-positive strains tested, but inactive against Gram-negative strains. The minimum inhibitory concentration and minimum bactericidal concentration were determined and found to be 539 μg/ml. The phytochemical analysis of hexane extract by gas chromatography mass spectrometry revealed the presence of 13 compounds. The crude hexane extract was partially purified by thin layer chromatography. The zone showing good antibacterial activity was analysed further by gas chromatography mass spectrometry, UV/Vis spectrophotometry and Fourier transform infrared spectroscopy, which indicated the probable presence of germacrone.

Resistance to antibiotics is a serious problem worldwide. In particular the multiple drug resistance among Staphylococcus aureus is of great concern. The increasing worldwide prevalence of infectious diseases has created an urge to look for new drugs from plants. The plant chosen in this study is Curcuma aromatica Salisb., used in cosmetic formulations and traditional medicinal applications [1,2], as an antiinflammatory agent, to promote blood circulation, to remove blood stasis and for the treatment of cancer [3]. Rhizomes are used in combination with astringents and aromatics for bruises, sprain, hiccough, bronchitis, cough, leucoderma and skin eruptions [4]. The paste made of benzoin and rhizome of C. aromatica is commonly used as a domestic remedy in headache. The monoterpenoids [5], sesquiterpenoids [5-7] and curcuminoids [8,9] of C. aromatica have been reported to possess antimicrobial [10,11], antifungal, antioxidant and antitumour activities [12,13].

The related species Curcuma longa, the common turmeric has wide medicinal value as stomachic, blood purifier, carminative and appetizer [14,15]. Reports indicate that they also possess antiinflammatory, antioxidant, antifertility, antimicrobial and anticancer activities [16]. Compared with C. longa, C. aromatica has been meagerly investigated for its activities even though it also showed a wide range of medicinal properties.

Hence the present study is on the antibacterial activity of the rhizome of C. aromatica and on its phytochemical composition. Fresh rhizomes of C. aromatica were collected from Kerala and identified at Department of Botany, PSGR Krishnammal College. The rhizomes were cleaned, shade dried and bladed. Powdered sample (80 g) was extracted with hexane since it a suitable nonpolar solvent for resolving sesquiterpenes in the Curcuma root sample. The extraction was done for 12 h in a Soxhlet extractor. The extract was filtered and solvent was evaporated, and semisolid obtained was weighed. The sample gave a yield of 14.36 g and was viscous in nature. The extractive value determined for hexane was found to be 9.575%. The residue was dissolved in 5 ml of dimethyl sulphoxide (DMSO), and stored at 4° for further use.

The antimicrobial activities of the plant extract were determined by the disc-diffusion method following the general recommendation of CLSI (formerly called as NCCLS) [17]. The tests were performed on Muller- Hinton agar for all microbes except Streptococcus sp where blood agar was used. The surface of the agar was uniformly inoculated with the test organisms. Different concentrations of hexane extract (7660, 15 320, 30 640, 61 280 and 76 600 μg) were loaded on sterile filter paper discs. Negative (DMSO) and appropriate positive controls (ceftazidime, vancomycin, ampicillin and cefoxitin) were also maintained. The loaded discs were placed on the surface of medium and the compound was allowed to diffuse for 5 min and the plates were kept for incubation at 37° for 24 h. At the end of incubation, inhibition zones formed around the discs were measured with a transparent ruler in millimetre. Triplicates were maintained.

Dilution susceptibility testing [18] was used to determine the minimum inhibitory concentration (MIC) of the test compounds. The concentrations tried were 8626, 4313, 2156, 1078, 539, 269, 134 and 67 μg/ ml. The minimum bactericidal concentration (MBC) was determined by subculturing the test dilution on to a fresh, drug-free, solid medium in a plate divided into eight sectors each for a particular dilution and incubating further for 18-24 h. Triplicates were maintained.

The partial purification of hexane extract was performed by thin layer chromatography (TLC) using precoated TLC plates with silica gel 60 F254 (Merck Ltd., Mumbai, India). The hexane extract was spotted, carefully dried and the plates were developed using a mixture of hexane and ethyl acetate in the ratio (8:2), which yielded better resolution. The developed plates were air dried and five different zones were demarcated. The zones were manually removed using a sterile scalpel, about 2 g of each zone was extracted with 7 ml of DMSO and centrifuged. The supernatant of 5 ml obtained was a clear solution of extract alone without silica particles was collected and subjected for further antimicrobial screening.

The phytochemical composition of the hexane extract was analysed by gas chromatography mass spectrometry (GC-MS, GC Clarus 500 Perkin Elmer). Column used was Elite-1-100% dimethylpolysiloxane, 30 m×0.25 mm×1 μmdf. Helium used as carrier gas at a flow rate of 1 ml/min with 2 μl injection volume. The component identification was done by comparing their mass spectra with the library NIST version-year 2005. The absorption spectrum of the extract was studied using a UV/Vis spectrophotometer (Labindia UV3000, Mumbai) ranging from 200 to 700 nm. The Fourier transform infrared spectroscopy (FT-IR) spectrum was determined using an Shimadzu FT-IR, Japan. The spectra are recorded within the 4000-500/ cm range and the analytical spectral range was 2010- 910 cm-1 in the trasmittance mode.

*is average of triplicates, MRSA=multi-drug resistant streptococcus aureus, ATCC 25922, 25923, 27853, 29212 and NCTC 10422 are standard strains. Positive controls-cef is ceftazidine, van is vancomycin, amp is ampicilin and cefo is cefoxitin, -is no inhibition.

The MIC and MBC results presented in Table 2 indicate that the hexane extract is not only inhibitory but also bactericidal. The MIC and MBC values for all the tested organisms were 539 μg/ml, except for S. Epidermidis, which showed a MIC value at 269 μg/ml and MBC value at 539 μg/ml. The results of GC-MS analysis of the hexane extract revealed the presence of 13 compounds (Table 3). The maximum peak area of 40.46% is for germacron, followed by à-vatirenene with 34.73% and androstan-17-one, 3-ethyl-3-hydroxy- (5à) with 13.42%.

Table 2: Mic and mbc of hexane extract on gram-positive strains

Partial purification of the extract by TLC, showed that the Zone 5 was inhibitory even at a low concentration of 5 μl/disc as shown in Table 4. The phytochemical analysis for this zone by GC-MS (Table 5), indicated the presence of germacrone. The UV/Vis absorption spectrum (fig. 1) and FT-IR spectrum (fig 2) of this zone also indicated the presence of germacrone. Germacrone is reported for its root weevil repellent [19] and antimicrobial properties [20], this supports the current findings.

*is average of triplicates, ACTC 25923 and NCTC 10422 are standard strains. Positive controls-cef is ceftazidine, -is no inhibtion, MRSA-methicilin resistant Staphylococcus aureus.

Table 4: Antibacterial activity of the zone 5 of tlc of hexane extract of curcuma aromatica

MW stands for molecular weight of the compound; PA% is percent peak area

Table 5: Gc-ms analysis of the zone 5 from tlc of hexane extract 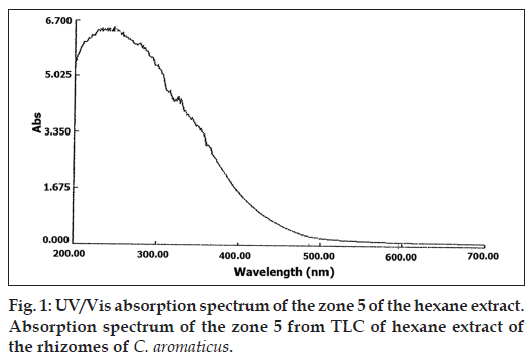 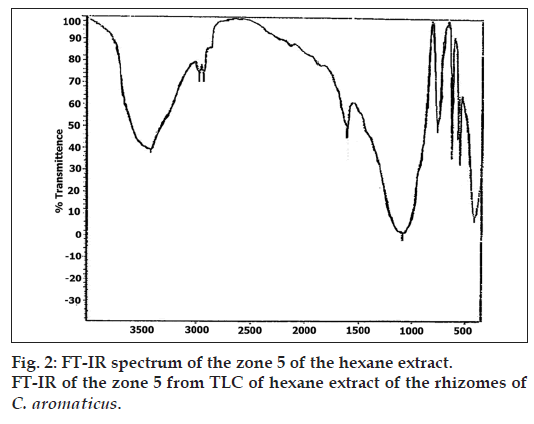