Oxidative stress (OS) and inflammation are the major risk factors in the pathogenesis of various chronic diseases and the stress is mainly due to the imbalance between the free radicals and antioxidants in the body [1,2]. Free radicals are extremely unstable and highly reactive molecules because of their negative state and generally take electrons from other molecules, thus starting a dangerous chain reaction termed as free radical damage [3-5]. The free radicals damage the structural integrity of cell membranes, cause changes in the structures of proteins, deoxyribonucleic acid (DNA), ribonucleic acid by withdrawing electrons through oxidation [6] that lead to alterations in normal cellular functions and accelerate cell damage progressing to cell death [7-9]. Reactive oxygen species (ROS) are widely believed to be involved in the aetiology of many diseases including inflammation [10]. Inflammation is a physiological response of the body to injuries or infections [11,12]. There are different types of inflammation in the body, which are mainly acute and chronic inflammations [13] and play an important role in immune system response against injuries and infection by signalling immune cells [14] that include macrophages, neutrophils either directly or through inflammatory cytokine production during inflammation. In addition, there are many reports on chronic inflammation to play a significant role in the pathogenesis of age-related diseases like diabetes, cardiovascular and autoimmune diseases [10,15,16].

Wheat has been a food crop for mankind since the beginning of agriculture. It is more widely cultivated than any other crop, and world trade is of greater monetary value than all other cereals combined [1]. Wheat grass (Triticum aestivum) belongs to the family Poaceae and is commonly called as bread wheat. Wheat grass has been traditionally used as food since ancient times and as well as to treat various diseases and disorders [22-24]. Earlier reports on nutritional value and medicinal uses of T. aestivum provided that, wheat grass has a significant role in the treatment of various disorders such as OS, some cancers, eczema, ulcers, gastritis, anaemia, asthma, obesity, high blood pressure and diabetes [1,25]. Cow urine has an irreplaceable role as an Ayurvedic medicine and has been well described in Sushrita Samhita and Ashtanga Sangraha to be the most effective substance with immeasurable therapeutic values [26]. Recent studies reported that the cow urine is a significant bioenhancer [26]. There are no previous studies on the evaluation of antiinflammatory activity of wheat grass powder fortified with cow urine distillate. As earlier reports stated that wheat grass powder is of high medicinal values [27] and based on the nutritional values, effective activity of wheat grass powder against OS [28,29], the present study was carried out to assess in vitro antioxidant and in vivo antiinflammatory activity of orally administered aqueous leaf extract of T. aestivum using carrageenaninduced inflammation in rats.

Dried T. aestivum (100 g) was directly purchased from the local market (Bhimavaram). The plant material was crushed thoroughly in a mortar and pestle, the powder was completely exhausted by adding small quantities of double-distilled water, which was filtered off every time in a successive manner, and allow drying to yield a dried extract. The dried extract was stored in a desiccator until further usage.

Preparation of wheat grass fortified with a cow urine distillate:

Different extracts collected were tested for the presence or absence of different bio active compounds and the total phenolic and alkaloid contents in these extracts were estimated using standard test procedures [30-33].

Ferric thiocyanate (FTC) method was used to evaluate the antioxidant activity [34-36] using BHT as a standard against wheat grass extract (WGE) and wheat grass extract fortified with cow urine extract (WGFE). In this method, the extract and the standard were suspended in 4 ml ethanol, mixed with 4.1 ml of 2.52 % linolenic acid in ethanol, 8 ml of 0.02 M phosphate buffer (pH 7.0) and 3.9 ml of distilled water. The mixture was placed at 40° and then 0.1 ml was mixed with 9.7 ml of 75 % (v/v) ethanol and 0.1 ml 30 % ammonium thiocyanate. Three minutes after adding ferrous chloride (0.1 ml of 2×10-2 M ferrous chloride in 3.5 % hydrochloric acid), the absorbance was measured at 500 nm in a spectrophotometer. This step was repeated every 24 h until the control (ethanol, the mixture without added sample) reached its maximal absorbance value. Percent inhibition of lipid peroxidation was estimated by the following formula, % inhibition = 100–((A1/A0)×100), where, A0 is the absorbance of the control and A1 is the absorbance of the sample extracts/standard.

Healthy adult Wistar rats and mice (National Institute of Nutrition, Hyderabad, India) weighing 220-250 and 25-30 g, respectively were used in the study. The animals were maintained under standard laboratory conditions and were fed regularly with normal pellet diet (Mahavir enterprises Pvt Ltd.; Hyderabad, India). The use and care of the animals in the experimental protocol has been approved by the Institutional Animal Ethics Committee, Shri Vishnu College of Pharmacy (Regd. No. 439/PO/01/a/CPCSEA) following the guidelines of the Committee for the Purpose of Control and Supervision of Experiments on Animals (CPCSEA), Government of India.

Acute toxicity studies were carried out on mice of single sex (n=6) with WGE and WGFE according to 37, Organisation for Economic Co-operation and Development guidelines [37]. The maintained animals were divided into two groups and were treated with 2000 mg/kg of both extracts orally. The treated animals were kept aside to observe physical, psychological behaviours and mortality.

Eight groups of rats were treated orally with 1 % Na CMC, 5 mg/kg indomethacin, 100, 200 and 400 mg/kg of aqueous extracts of WGE and WGFE, respectively and allowed to acclimatize for 60 min before any injection [38-40]. Sixty minutes later, an injection of 1 % carrageenan in normal saline was made into the subplantar region of the right hind paw of each rat in each group. Before induction of edema, the dorsiventral thickness of both paws of each rat was measured using Zeitlin apparatus [38-40]. The apparatus consisted of a graduated micrometer, combined with a constant loaded lever system to magnify small changes in the paw thickness during the course of the experiment. The measurements were taken at 1 h intervals after induction of edema for up to 6 h. Edema was monitored and expressed as percent increase in paw thickness in the carrageenan-injected paw. To assess the edema in control paw (right) saline was injected subcutaneously. Percent inhibition of paw thickness was calculated using the Eqns., % increase in paw edema = Yt–Y0×100/ Y0, where, Yt is paw thickness at time (1, 2, 3, 4, 5 and 6 h) after carrageenan injection, Y0 is paw thickness at 0 h (before injection). % inhibition = 100[1–(Yt/Yc)], where, Yt is an average increase in paw thickness in groups tested with test compounds and Yc is an average increase in paw thickness in control.

Phytochemical screening of WGE and WGFE showed presence of different phytochemical compounds. There was no great differences observed between them but the intensity of the positive results was high in WGFE compared to WGE. Both the extracts have shown presence of steroids, terpenoids, carbohydrates, phenols, alkaloids, glycosides, oils and amino acids but have shown absence of flavonoids, tannins, saponins and quinones (Table 1). Preliminary phytochemical analysis confirmed the presence of phenols and alkaloids in both WGFE and WGE, which were quantified. WGFE possessed greater phenolic and alkaloid content, 12.58±42, 8.63±.67 compared to WGE, which had 8.54±0.33 and 5.78±1.36, respectively

The antioxidant activity results obtained with WGFE and WGE in FTC method confirmed that both extracts possessed antioxidant activity against different free radicals. Both extracts inhibited the free radical (oxidants) formation and linolenic acid peroxidation over 7 days in the FTC method (Table 2 and fig.1). The antioxidant capacity of both extracts was comparable to that exhibited by the standard BHT and percent inhibition of linolenic acid peroxidation during the study was increased and greater inhibition on d 5 was observed for WGFE and on d 4 for WGE. Percent inhibition produced by WGE was 50.88 on d 4 while for WGFE was 61.20 on day 5.

Table 2: Antioxidant activity of WGE and WGFE in FTC method 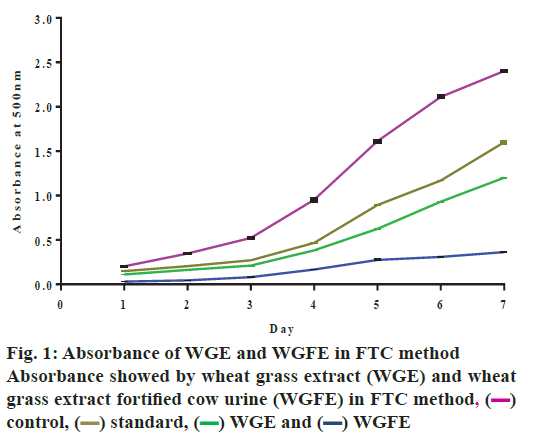 The toxicity of the extracts WGFE and WGE was evaluated on mice and the extracts were found to be safe up to 2000 mg/kg, the highest dose tested. There was no mortality and physiological changes observed in groups of animals treated with WGFE and WGE.

Paw inflammation increased after 1 h of carrageenan injection and continued to increase up to 4 h after which the inflammation slowly reduced (fig. 2). The extent of paw inflammation was less in groups treated with high dose of WGFE and WGE and the results obtained confirmed that both extracts exhibited concentration-dependent antiinflammatory activity. WGFE appeared to produce greater activity when compared to WGE group but both extracts were less active than indomethacin. 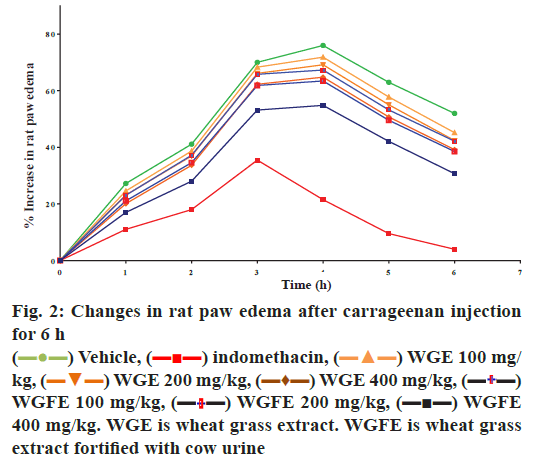 Fig. 2 revealed that the rat paw edema increased with time after carrageenan injection up to 6 h with the peak edema volume occurring at 4 h after injection. Treatment with different doses of WGE, WGFE and the standard drug indomethacin produced dose-dependent inhibition of the edema. Fig. 3 depicts the maximal percent inhibition in rat paw volume produced by each dose of the extract and the standard indomethacin at 6 h after carrageenan injection. It was observed that maximum inhibition of rat paw edema was produced by indomethacin followed by the 400 mg/kg dose of WGFE, while 400 mg/kg dose of WGE produced much lower inhibition. These data demonstrated that the antiinflammatory effect of the WGE was increased by fortification with cow urine, but the effect is still lower than that produce by indomethacin. 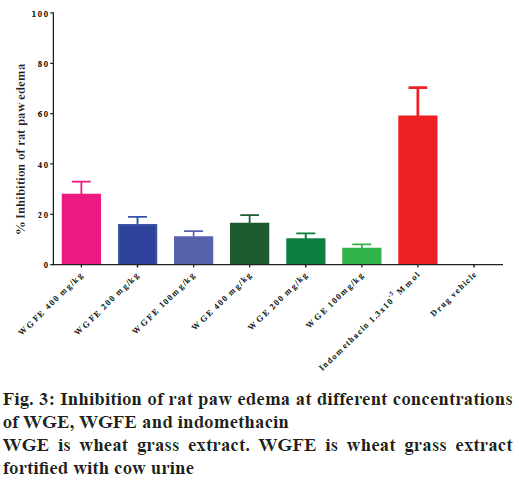 The carrageenan-induced paw edema method was predominantly used to evaluate the antiinflammatory activity of various test compounds including natural extracts [43]. As mentioned above, inflammation is one of the major debilitating disease around the world and it involved different mechanisms. In this process, inflammation mainly causes OS. OS is mainly over production of ROS, leading to damage of biomolecules in the body such as lipid, protein, amino acids, and DNA and alteration in cells' normal function [44,13]. Hence in the current study FTC method was used to evaluate the antioxidant activity of WGE and WGFE and results demonstrated antiinflammatory activity. Previous studies from our laboratory reported that fortified wheat grass extract possessed free radical scavenging activity against free radicals like superoxide, hydroxyl and DPPH [45].

Development of edema in the rat paw injected with carrageenan could be due to release of histamine, serotonin, and prostaglandins as previously reported [46]. Acute hind paw edema is induced in rats by injecting 0.1 ml of 1 % v/v carrageenan, which reached a peak level 3-5 h after carrageenan injection. Prostaglandin E2, a powerful vasodilator, along with other inflammatory vasodilators such as histamine and bradykinin was reported to contribute to the redness and increased blood flow in the areas of acute inflammation [47]. All these mediators indirectly activate the formation of free radicals and those free radicals causes the lipid oxidation [48].

The results of the present investigation revealed the antioxidant and antiinflammatory activities possessed by the WGFE and WGE and also that fortification with cow urine might increases these biological activities. The current research work demonstrated that the T. aestivum extract and T. aestivum extract fortified with cow urine, both exhibited significant antioxidant and antiinflammatory activities. The fortified extract showed higher contents on phytochemical analysis and better biological activity. Hence the current approach to fortify natural extracts with cow urine to obtain better activity appeared to be working. Further research must focus on isolation and identification of compounds responsible for the enhancement of activity when the extract was fortified with cow urine.