Plants and bioactive substances from plants were used as traditional medicine to treat diseases throughout history. Nowadays, treatment with plants still continues significantly in various cultures. According to the World Health Organization, approximately 65 % of the world population uses plants for treatment purposes [1]. There have been many studies related to the biological effects of plants. Therefore, extracts and essential oils obtained from plants have been used as anticancer agents in addition to antimicrobial, antiviral and antiparasitic effects. Thymbra sintenisii is thought as an important branch of Lamiaceae family [2-4].

Thymbra species are represented in the flora of Turkey by two types and 4 taxon, which are T. spicata L. (var. spicata, var. intricata P.H. Davis) and T. sintenisii Bornm. and Aznav. (subsp. sintenisii, subsp. isaurica P.H. Davis). The dried leaves of the plant, known as “white zahter” colloquially, are used in the form of a herbal tea in Anatolia and as an antiseptic against flu [5,6]. The biological and antimicrobial activities of Thymbra species have been reported in several studies [7-9]. However, only a few reports were published on T. sintenisii. Therefore, the aim of the study was to evaluate antimicrobial, antioxidant, cytotoxic and wound healing activities, as well as the phytochemical composition of ethanol extract of T. sintenisii (TSEE).

Aerial parts of T. sintenisii were collected during August 2016 from Siirt city located in the Southeastern Anatolia region of Turkey. The plant material was identified at the Pamukkale University and verified using Flora of Turkey. Dried samples of specimen were deposited at the Pamukkale University herbarium, Turkey (M. Çiçek 2014-36 Herb) for future reference. Plant samples were dried at room conditions. Aerial parts of T. sintenisii were ground in a Waring blender and extracted with ethanol using a Soxhlet apparatus. Solvent was evaporated using a rotary evaporator (Stuart RE300) under reduced pressure at 30° [10].

Chemical composition of TSEE was evaluated according to the method by Abay et al [11]. Gas chromatography-mass spectrometry (GC-MS) analyses were performed on an Agilent Technologies GC 7890A equipped with 5975 Triple Axis Detector mass spectrometer. For GC-MS detection, DBWAXETR column (60×320×0.25 m), electron ionization system and ionization energy of 70 eV were used. Helium was the carrier gas at a flow rate of 1 ml/min. The column temperature was operated under the same conditions as described above.

The antimicrobial activity of TSEE was evaluated on test bacteria using Kirby-Bauer disc diffusion method [12]. In this method 100 μl of suspension containing 108 CFU/ml of bacteria on Mueller-Hinton broth (MHB) was used. After the impregnation of the disc (6 mm in diameter) with 20 μl at 50 mg/ml extract, was placed on the inoculated agar. The solvent in which the extract was dissolved was used as the negative control. Commercially available cefoperazone/sulbactam (105 μg) and fluconazole (25 μg) discs were used as positive control for bacteria and fungi, respectively. The zones of inhibition around the disks were measured after 24 h of incubation at 37° for bacteria and 48 h for fungi at 28°. All the assays were done in triplicate. The samples exhibiting antibacterial activity ≥7 mm in preliminary screening were used to determine minimum inhibitory concentration (MIC).

The broth microdilution method was employed for the determination of antimicrobial activities of TSEE according to the protocol of Clinical and Laboratory Standards Institute [13]. MIC values of the TSEE were determined using the micro-well dilution method for the bacterial and fungal strains, which were found to be sensitive to TSEE in the disc diffusion assay. MIC values were determined by the serial dilution technique using 96-well microtiter plates. Serial two-fold dilutions were prepared in 96-well plates with MHB at a concentration varying between 0.03 to 2 mg/ml. The inocula of the strains were prepared from overnight broth cultures and suspensions were adjusted to 0.5 McFarland standard turbidity. The 96-well plates were prepared by adding 95 μl of MHB and 5 μl of the inocula into each well. One hundred microlitres of TSEE dilutions were added to the wells and incubated at 37o, for 24 h. The last well containing 195 μl of nutrient broth without the compound and 5 μl of the inocula on each strip was served as the negative control. Piperacillin/tazobactam (8/1) and fluconazole were used as positive control for bacteria and fungi, respectively. A microplate reader (Thermo Scientific microplate photometer, Multiskan FC, USA) was used to measure the absorbance of the plates at 570 nm after incubation for 24 h at 37°. The optical density at the 24th h of the inoculum remained the same or decreased at the MIC, which was detected as the lowest concentration of the compounds, when compared to the reading at the beginning.

The modified method of DPPH of Yu et al. [14] was used for radical scavenging activity of TSEE. Varying concentrations of TSEE were prepared. Equal volumes (1000 μl) of DPPH and sample solutions were incubated for 30 min with stirring. After incubation, DPPH was measured using spectrophotometer at 517 nm wavelength. DPPH solution and solvent were used as negative controls while the ascorbic acid used as the positive control. Samples and radical scavenging activity of the standard were calculated accordingly.

Male Wistar rats (n=16) weighing between 250 and 275 g were used. This study was conducted within strict adherence to the principles of laboratory animal rules of Cumhuriyet University and the standards for Animal Experiments and Animal Care. All animals were maintained on standard pellet diet and water throughout the experiments and were housed 8 animals per cage. Rats were capable of normal activity in cages at 22 ± 2°, with humidity (50-70 %) under a 12 h light/ dark cycle [15].

Rats were anaesthetized with ketamine hydrochloride (90 mg/kg) and were then incised with 3 cm full thickness incision and a punch biopsy was opened 3×3 cm2. Animals were randomly assigned to 2 groups of 8 rats each. Group 1 served as the control, whereas the other group was TSEE treated. Sterile solution of TSEE was applied topically to each wound of the animals at a dose of 50 μl/wound once daily for 7 d. The animals in all groups were euthanized in accordance with the procedures on day 7 and cardiac blood was taken. Tubes were centrifuged at 3000 rpm for 10 min. Serum was stored at –80° until measurement. TNF-α was determined using ELISA according to a previously described method [16]. Animals of all groups were appropriately terminated on d 7 of the experiment and tissue samples were taken from the wounds and were examined histopathologically. The changes occurred in wound area were regularly measured and calculated according to the following Eqn., wound contraction=(healed area/total wound area)×100 and wound healing was compared with the control group graphically (healed area=wound area–present wound area) [17].

MCF-7 (human breast cancer cell line, ATCC HTB-22), MG63 (human osteosarcoma cell line, ATCC CRL- 1427), L929 (mouse fibroblast cell, ATCC CCL-1) cells were purchased from ATCC. Cells were grown at 37° in a humidified incubator (5 % CO2). All media were supplemented with 1 % penicilin (100 U/ml), streptomycin (100 μg/ml), and 10 % FBS. Cytotoxicity was quantitatively evaluated by XTT method. The cells were seeded in 96-well plate in growth medium then treated with different concentrations of test compounds and incubated in a humidified CO2 atmosphere at 37° for 24 h. After the incubation, 100 μl XTT was added to each well for another 4 h incubation. The optical density values were measured at 475 nm using a microplate reader [18].

Data were expressed as the arithmetic mean ± standard deviation (SD). One way ANOVA and post-hoc Tukey analyses were used to reveal the relationships between groups. The differences were accepted as significant for p<0.05. Statistical analysis was performed with SPSS for windows 22.0 package. All determinations were computed three times.

In Turkey there are many aromatic plant species belonging to Lamiaceae family defined as “thyme”. However, the species containing thymol/carvacrol type of essential oil are regarded as "thyme". Among these species, Thymus, Origanum, Satureja, Thymbra, and Coridothymus types are especially important in terms of their wide distribution and economic benefits [19]. According to the statement of World Health Organization, the increase of the resistance to antibiotics arising in recent years is accepted as one of the most significant problem for human health [20]. In this regard, potential effects of plant extracts on microorganisms have been studied by many researchers [21]. Some studies reported the presence of antibacterial and antifungal activities of several types belonging to Thymbra species. Thymbra species can be considered as a natural antimicrobial agent source [22-24]. The phytochemical composition of TSEE was analysed by gas chromatography. The major components of TSEE were thymol (64.97 %), p-tert-butylcatechol (11.99 %), borneol (2.25 %; Table 1). Khoury et al. reported thymol and borneol were the major components of the essential oil of some species from Lamiaceae collected from different locations in Lebanon [25].

Thymol has been used in traditional medicine for treatment of diseases for many years. Valuable information have been revealed antioxidant, antiinflammatory, antifungal, wound healing, antimutagenic properties [26,27]. Thymol (64.97 %) present in the essential oil of T. sintenisii showed bacteriostatic activity against most of the Grampositive and negative bacteria. The activity of TSEE was found to be 0.5 mg/ml against S. boydii and P. aeruginosa (clinical isolate) strains, whereas ≥2 mg/ml MIC value was identified against other bacterial strains. Extract showed a quite strong activity against C. tropicalis with 0.06 mg/ml (Table 2). Antimicrobial activity level of T. sintenisii ethanol extract was compared in terms of MIC values, it has been found that it had the strongest effect against C. tropicalis, then against S. boydii and P. aeruginosa strains. The antimicrobial effect against other tested strains is found to be weaker. Olasupo et al. revealed antimicrobial effect of thymol [28]. Another study, thymol exhibited antimicrobial activity against S. aureus and Escherichia coli [29]. Thymol inhibits growth of S. aureus, E. coli and Salmonella typhimurium [30]. As mentioned in the literature, thymol exhibited high antibacterial and antifungal activities [25,31]. 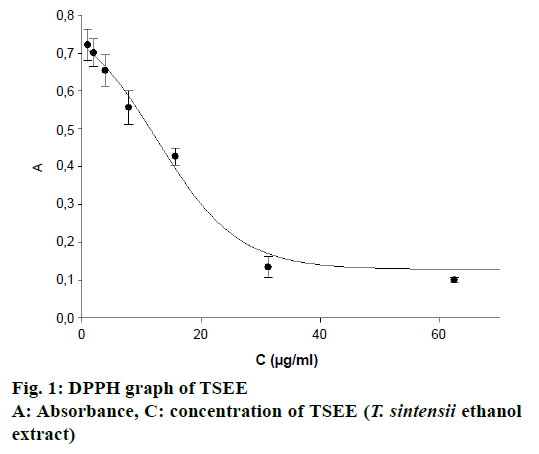 The premier objective is to destroy cancer cells in oncologic research, but to alleviate side effects of anticancer agents it is essential that the newer agents interfere with fewer biochemical pathways. Cytotoxic activity was determined by XTT method after incubating the cells for 24 h with the compound at increased concentrations. The extract was tested on MCF-7 and MG63 cancer cell lines to find out its cytotoxicity activity. Healthy L929 mouse fibroblast cell line was used as control. Extract was found to have cytotoxic effects on both cell lines at 40 μg/ml concentrations and above (Figure 2). IC50 values were found to be against MG63- 37.28 μg/ml, MCF-7- 44.40 μg/ml and L929- 44.84 μg/ml at 24 h (Figure 2). Delgado-Adámez et al. reported that cytotoxic major component of thyme. Yeh et al. demonstrated that thymol decreased cell viability on human prostate cancer cells [35]. Thymol stimulated cytotoxic activity in MCF-7 with IC50 of 2.5 μg/ml [36]. Chang et al. reported that thymol (400 μg/ml) trigger cytotoxic activity in MG63 [37]. 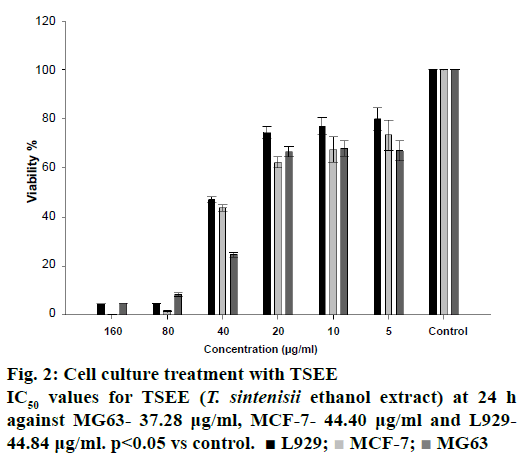 Wound is result of disruption of normal anatomical structure and functional integrity. Recently, many studies reported about wound healing, but these have not been at the desired level yet. TNF-α is a proinflammatory, angiogenic cytokine and growth factor. Therefore, determination of TNF-α level would be an important determinant for wound healing [38]. In the present study, the effect of TSEE was determined and compared to the control, which was found to be at the 7/30 ratio, indicating that the extract possessed at least four times better healing activity compared to untreated (Figure 3). The extract significantly accelerated wound healing process in the treated rats. It has been observed that TNF-α level of the treated group was decreased about 30 % in 7 d (Figure 4). 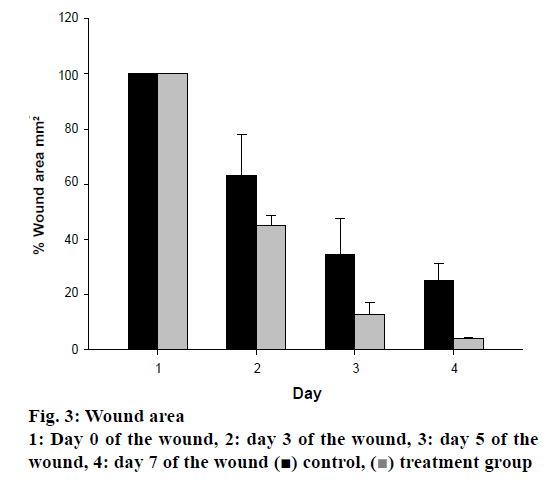 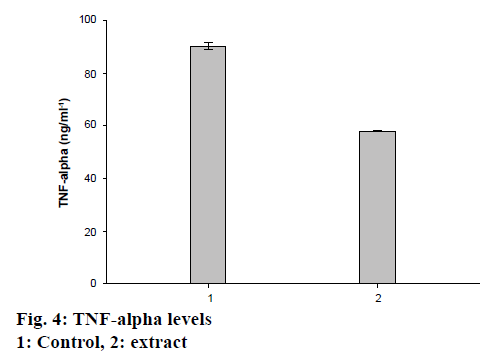 As a result, in this study it was observed that antimicrobial, antioxidant, cytotoxic activities and wound healing effect of T. sintenisii were quite remarkable. These results indicated that this plant could be used as a natural source for developing newer therapeutic agents. Further studies are needed to better understand the molecular mechanisms underlying these effects of T. sintenisii extract.

The authors report that they have no conflicts interest