Metal dithiocarbazate complexes involving nitrogensulphur donor ligands are of considerable interest due to their potential biological activity [1] and practical applications in the fields of pharmaceutical and agricultural industries [2,3], in addition to the general considerations of metal-nitrogen and metal-sulphur bonding and electron delocalisation in transition metal complexes. Dithiocarbazates exhibit significant antifungal, antiprotozoal, antibacterial and anticancer activity [4]. Recently, an in vitro insulinomimetic potential of these compounds has been established [5].

Carcinostatic activities have been found for metal complexes of dithiocarbazic acid and the Schiff base derived from S-methyl ester2. In the present study, isoniazid (isonicotinic acid hydrazide), a well known most widely established antitubercular drug compound [6] has been used to obtain the dithiocarbazate ligand. Interest in antimicrobial studies of metal isonicotinoyldithiocarbazates (Scheme 1) is because: (i) the ligand having many potential donor sites can act as either bidentate or tridentate donor giving rise to a variety of bonding properties and structural novelties, and (ii) metal ion incorporation into the drug based compound may increase its potency and improve its pharmacological properties. 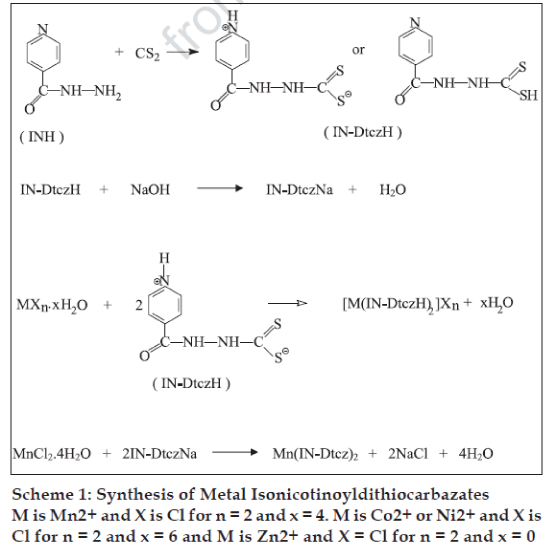 Melting points of the complexes were determined in open glass capillaries. Elemental analyses and IR spectral measurements were made according to earlier reported methods [7]. Isonicotinoyldithiocarbazic acid (IN-DtczH) was prepared by the drop-wise addition of carbon disulphide (0.55 g; 7.29 mmol) to 25 ml of isonicotinic acid hydrazide (1 g; 7.29 mmol) solution in ethanol. The reaction mixture, kept at 30o, was continuously stirred for about 1/2 h. The resulting creamish solid was filtered and dried in air and final drying was done in a calcium chloride desiccator, yield: 98%, IR (KBr) cm-1: 3300-3200 (N-H), 1653 (C=O), 1410 (C-N), 1055 (N-N), 1014 (CS).

As a preliminary screening for antimicrobial activity, compounds were tested against standard strains of gram (-) Escherichia coli (NCTC), Pseudomonas aeruginosa (NCTC), gram (+) Staphylococcus aureus (NCTC), Enterococcus species (ATCC) and the pathogenic fungus Candida albicans. Antimicrobial studies were performed according to the agar dilution method. The MIC was expressed as the minimum compound concentration at which no growth of the pathogen takes place in 20-24 h (minimum inhibitory concentration). Various concentrations of ligands and metal complexes in the range of 200-1500 μg/ml were prepared in dimethylsulphoxide (DMSO Merck). A series of plates containing Mueller Hinton agar and solutions of metal complexes were prepared. The plates were dried at 36o for about 30 min in an incubator. To prepare the inoculum of the test strains, an inoculating loop was touched to four or five isolated colonies of the pathogen growing on agar and then used to inoculate a tube of culture broth (peptone broth for bacterial strains and Sabouraud’s broth for fungal strain). The culture was incubated for two hours at 35o until it became slightly turbid and diluted to match 0.5 McFarland standard. The test strains were then placed on the dried solid Mueller Hinton agar + metal complex surface with the help of an inoculating loop (4×104 colony forming unit/ml). The plate was immediately placed in a 35o incubator, for 16-20 h. The lowest concentration of the compound resulting in no growth after 16-20 h of incubation is the MIC. The results were compared with that of chloramphenicol (MIC= 4 μg/ml) [8], a standard broad-spectrum antibiotic for prokaryotic microorganisms and nystatin (BDH) (MIC= 4-8 μg/ml) [9] for Candida albicans as positive control. Blank tests have shown that DMSO in the preparation of the test solution does not affect the test organisms.

The ligands isonicotinoyldithiocarbazic acid (IN-DtczH), sodium isonicotinoyldithiocarbazate (IN-DtczNa) and their metal complexes [M(IN-DtczH)2]Cl2 (M = Mn, Co, Ni, Zn) and Mn(IN-Dtcz)2 have been screened for their in vitro antimicrobial activity against the pathogenic bacteria gram (-) Escherichia coli, Pseudomonas aeruginosa, gram (+) Staphylococcus aureus, Enterococcus sp. and the pathogenic fungus Candida albicans using the agar dilution method. The MIC values are given in Table 1. The data shows that metal complexes are much more potent against microbial pathogens in comparison to the free ligands, i.e. IN-DtczH and IN-DtczNa. All metal isonicotinoyl dithiocarbazates have been found to be most effective against the yeast C. albicans with MIC values in the range 75-1000 μg/ml. Manganese complex, i.e. Mn(IN-Dtcz)2 with no anion in the secondary coordination sphere exhibited antimicrobial activity against this strain with MIC value of 75 μg/ml. The same complex has also been found to moderately inhibit the growth of Enterococcus sp. at MIC value 500 μg/ml. For S. aureus the complex Mn(IN-Dtcz)2 potentially inhibits its growth at MIC of 175 μg/ml while the complex [Ni(IN-DtczH)2]Cl2 also exhibited antimicrobial activity against this strain at MIC value of 300 μg/ml. The nickel isonicotinoyldithiocarbazic acid complex, i.e. [Ni(IN-DtczH)2]Cl2 was also found to act as moderate antibacterial agent against three of the pathogenic bacterial strains, viz. E. coli, P. aeruginosa and Enterococcus sp. at MIC value of 750 μg/ml.

Table 1: Antimicrobial activity of the compounds

The observed increase in antimicrobial activity finds support from the literature [10-13] because probably following factors can be operative. Such increased activity of the metal chelates can be explained on the basis of Overtone’s concept10 and Tweedy’s chelation theory11. The lipid membrane that surrounds the cell favours the passage of only lipid soluble materials due to which lipophilicity is an important factor which controls the antimicrobial activity. On chelation, the polarity of the metal ion will be reduced to a greater extent due to the overlap of the ligand orbitals and partial sharing of the positive charge of the metal ion with the donor groups. Further, it increases the delocalisation of pi-electrons over the whole chelate ring and hence enhances the liposolubility of the complexes. This increased liposolubility enhances the penetration of the complexes into the lipid membrane; the hydrocarbon tail functions as a lipophilic group to drive the compound through the semipermeable membrane of the cell; and blocks the metal binding sites in the enzymes of microorganisms.

The presence of sulphur in the ligand molecule does apparently improve the activity of the ligand and its metal complexes. A similar observation holds for Pd(II), Pt(II) and Ru(II) complexes of SN donor ligands derived from S-alkyldithiocarbazate, as compared to the corresponding complexes with ON donor ligands3, suggesting that sulphur finds a general role in activity enhancement. This can be compared with the natural product allicin, a sulfinothioc acid [-S(O)-S-] derivative (equivalent to [-S(C)-S-] group of the dithiocarbazate species under study) isolated from garlic (Allium sativum)12, which is very active as an antimicrobial agent, possibly due to its specific interference with enzymes having sulfhydryl groups at their active sites.

An additional important feature in the biologically active metal dithiocarbazate complexes of the present investigation may be imparted by the peculiar nature of the ligand in which heteroaroyl substitution may bring about a change in the coordinating ability. The binding of the complexed metals to the nitrogen bases of DNA and RNA, and the inhibition of DNA synthesis through the blockage of the enzyme ribonucleotide diphosphate reductase (RBD) have been suggested as possible mechanisms of action by earlier workers3. The action of these dithio-derivatives could be due to the interaction of the nucleic acid component of the bacteria with the sulphur ligands (which contains lone pairs) or the d-metal ions which act as good acceptors, though such interactions increase with metal ions having d-sub shells less than half-filled. For the fungal pathogens some authors have given appreciable antifungal credit to combination of the chemical compound with sterols in the fungal plasma membrane to disrupt the membrane13.

One of the authors (Kamakshi Lumba) is thankful to the CSIR, New Delhi, for providing financial assistance in the form of JRF.