Antinociceptive activity of aqueous and alcohol extract of Evodia rutaecarpa 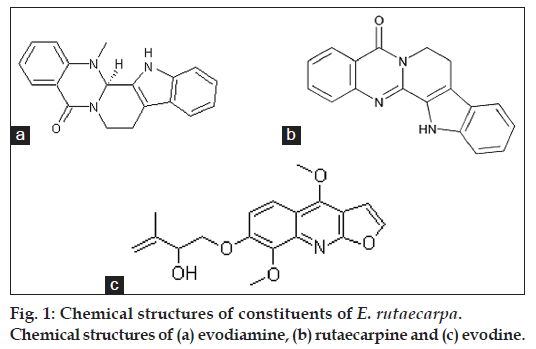 Kunming mice with half male and female (Guangdong Medical Experimental Animal Center, Guangzhou, China) weighing 18 to 20 g were used for all the experiments. Animals were housed 5 per cage in a room maintained at 22±0.5° with an alternating 12 h light-dark cycle. Food and water were available ad libitum. Experiments were performed during the light phase of the cycle (10:00 to 17:00 h). These experiments were approved by the Animal Care and Use Committee, Guangzhou University of Chinese Medicine.

The hot-plate test was used to measure response latencies according to the method described by Almeida et al. [3]. with minor modifications. The mice were placed on an YLS-6B hot-plate maintained at 55±0.5° and the time between placement of the mouse on the platform and shaking or licking of the paws or jumping was recorded as the hot-plate latency. Mice with baseline latencies from 8 to 22 s were selected into the study. A significant increase of the latency was considered as indicative of analgesic activity. Twenty-four hours later and 60 min before the test, groups of animals was treated with water, methanol or ethanol extract of E. rutaecarpa 150 or 300 mg/kg p.o., respectively. Another group was given compound aminophenazone and barbital injection (150 mg/kg p.o.) while control animals received the same volume of 0.5% CMC-Na p.o. (20 ml/kg).

Antinociceptive effects by acetic acid-induced writhing test were performed by the method of Koster et al. [4]. Animals were divided into eight groups containing ten animals in each. Group I (normal) mice were fed with standard diet and were administered with an aqueous solution of 0.5% CMCNa (20 ml/kg p.o.). In Group II, mice were treated with compound aminophenazone and barbital injection (150 mg/kg p.o.). Group III and group IV mice were treated with water extract of E. rutaecarpa 150 and 300 mg/kg p.o., respectively. Group V and VI mice were treated with methanol extract of E. rutaecarpa 150 and 300 mg/kg p.o., respectively. Group VII and VIII mice were treated with ethanol extract of E. rutaecarpa 150 and 300 mg/kg p.o., respectively. All groups were treated once daily for a period of 7 days. Mice were given an intraperitoneal injection with 1% acetic acid (10 ml/kg) 60 min after the last administration. The number of abdominal constrictions produced in these animals was counted cumulatively for 15 min after the injection. Antinociceptive activity, indicated by the reduction in the mean of the number of abdominal constrictions in the test groups compared to the control group, was calculated as percent inhibition of abdominal constrictions (percent of inhibitory level) using the following formula: (mean of (control-test group)/control group×100 %).

The formalin test was carried out as described by Hunskaar and Hole [5] but with slight modifications. The design of grouping and drug administration was the same as acetic acid induced writhing test. Pain was induced by injecting 9 μl of 2% formalin in the subplantar region of the right hind paw 60 min after the last administration. The amount of time that the animal spent licking the injected paw, considered as an indicator of pain, was recorded for duration of 30 min in two phases, known as the early (0-10 min) and late (10-30 min) phases.

Chromatograms obtained from a standard solution and different extracts (fig. 2) reveal the selected marker constituents in standard and sample solutions were having same retention time. Spiking the sample solution with the standard compounds was also used to assist confirmation of peak identity. The method enables precise, sensitive and highly accurate quantification of evodiamine, rutaecarpine and evodine (method validation data not shown). When the method was used for analysis of ER, the contents of evodiamine, rutaecarpine and evodine showed in Table 1. Results revealed that alcohol was a better solvent to extract ER than water, the contents of evodiamine and rutaecarpine were about 20-30 times better extracted by alcohol than water and for evodine was about 1.6 times, respectively. There was no difference between methanol and ethanol. Table 1: The Active Contents In Different Extracts Of Evodia Rutaecarpa

In hot plate test, oral administrations of different E. rutaecarpa extract were ineffective on the reaction to thermal stimuli in mice but compound aminophenazone and barbital injection (150 mg/kg p.o.) could raise the pain threshold (data not shown). These results were consistent with the report of Matsuda et al. [1].

In acetic acid-induced writhing test, the water extract, methanol extract and ethanol extract (150 and 300 mg/kg, p.o.) demonstrated a significant (P<0.05) antinociceptive activity in the acetic acidinduced writhing test (Table 2) with the percentage of analgesia ranging between 35 to 56%. Though there was no statistical significance among different extracts of E. rutaecarpa, the ethanol extract of E. rutaecarpa (300 mg/kg) produced a higher percentage change (56.4) relative to other extracts. Compound aminophenazone and barbital injection at 150 mg/kg (p.o.) showed the most efficacious antinociceptive activity, inhibitory percentage up to 96%.

Values expressed as mean±SEM, n=10 animals in each group. The results were analyzed using One way ANOVA followed by Dunnett’s multiple comparison tests. *P<0.05 when compared with normal group. There was no statistical significance among different extracts of Evodia Rutaecarpa

In formalin test, injection of formalin develops a biphasic licking response on the injected paw of mice. The early phase (neurogenic phase) occurs 0-10 min after injection and the late phase (inflammatory phase) occurs between 10 and 30 min after formalin injection. As shown in fig. 3, water, methanol and ethanol extracts of E. rutaecarpa at 300 mg/kg (p.o.) significantly reduced the time the mouse licked its stimulated paw in late testing phase when compared with control, ethanol extract of ER at 150 mg/kg (p.o.) also showed the effect. Compound aminophenazone and barbital injection at 150 mg/kg (p.o.) showed the effect in both phases. All 3 extracts exhibited antinociceptive activity in the inflammatory phase, while the ethanol extract was better than the others. It is likely that the E. rutaecarpa was able to produce greater activity due to the presence of higher contents of evodiamine, rutaecarpine and evodine.