Heterocyclic compounds are known to exhibit a variety of biological activities because of their resemblance to a number of naturally occurring metabolites. Various 2-phenyl-1H-indoles and benzimidazole derivatives have been tested for total antioxidant capacity by phosphomolybednum reduction method and 2,2-diphenyl-1-picrylhydrazide free radical scavenging activity. The compounds with electron donating substituents were found to be better antioxidants with IIIa to be most effective. The best radical scavenger was IVb. Antimicrobial activity was screened in vitro against Pseudomonas sp., Enterobacter sp. (Gram-negative) and Bacillus sp. (Gram-positive). It was found that Gram-negative bacteria were more susceptible than Gram-positive bacteria. Indoles exhibited better antibacterial activity compared to benzimidazoles.

Heterocyclic chemistry forms an integral part of synthetic chemistry and has been a source of a number of bioactive compounds. Its utility lies in the capability of heterocyclic compounds to mimic the structure of peptides and to bind reversibly to proteins [1-4]. To a synthetic chemist, it provides an opportunity to synthesize a library of compounds based on a core scaffold and to screen the derivatives for various biological activities. Various biologically active synthetic compounds have five membered nitrogen containing ring as the core pharmacophore [5]. Free radicals are well-known oxidants because of their tendency to accept the electrons from the potential donors [6]. Reactive oxygen species are a product of normal cellular metabolism [7]. They have an important role in regulating physiological functioning of the cell [8]. To counteract them, antioxidants have the ability to donate electrons to free radicals [9]. Antioxidants, even at low concentration, significantly delay or prevent the oxidation of easy oxidizable substrates [10]. It is reported that the compounds bearing O–H bonds behave as antioxidants but along with them, amines having N–H bond functions as the antioxidant, which have attracted much research attention because cyclic amines have always been the central structure in many currently used drugs [11]. Indoles and benzimidazoles are very popular nitrogen containing heterocycles. Indoles have bicyclic structure having benzene ring fused to pyrrole and are known to possess anticancer [12], antifungal [13], anticonvulsant [14] and antiviral [15] activities. Indoles of commercial importance include drugs such as indomethacin (antiinflammatory, an antipyretic and an analgesic) and indoxole (an antiinflammatory and antipyretic drug). Indoles also present in naturally occurring compounds like dimethyltryptamine (hallucinogen), tryptophan (amino acid) and melatonin [16] (antioxidant as free radical scavenger). Indoles are found in edible substances like brown algae Sargassum thunbergii [17] and in the form of alkaloids in peaches [18] and that of Melodinus cochinchinensis [19]. Another nitrogen containing heterocycle is benzimidazole, which has an imidazole ring fused to benzene. The biological significance of benzimidazoles is due to its close relationship to the structure of purines. A number of other benzimidazole derivatives possessed various biological activities like antimicrobial [20], antiviral [21], antifungal [22], antimalarial [23], antitumor [24], anticancer [25], antihypertensive [26], antiinflammatory [27] and antioxidant [28]. The present study was focused on evaluating substituted indole and benzimidazole derivatives (Table 1) for total antioxidant capacity (TAC), free radical scavenging and antimicrobial activity.

2-Phenyl-1H-indoles (Ia-Va) were synthesized by reacting equimolar amounts of phenylhydrazine with different substituted acetophenones to form respective phenylhydrazones. The phenylhydrazones were further condensed in presence of polyphosphoric acid to afford the indoles [29]. Substituted carboxylic acids were refluxed with orthophenylenediammine in equimolar amounts in presence of 4 N HCl. On completion of reaction, the mixture was basified with dilute NaOH to afford benzimidazole derivatives (Ib-Vb). The compounds (Ia-Va, Ib-Vb) were screened for antioxidant activity to determine TAC and free radical scavenging activity (RSA) using DMSO as the control and ascorbic acid (AA) as a standard.

TAC was determined by phosphomolybdenum complex formation method [30]. The assay is based on the reduction of Mo (VI) to Mo (V) by the test compounds and subsequent formation of a green phosphate/Mo (V) complex at acidic pH. Three millilitres of test compound was combined with 1 ml of reagent solution (0.6 M sulfuric acid, 28 mM sodium phosphate and 4 mM ammonium molybdate). In case of blank, 3 ml of DMSO was used in place of test compounds. The tubes containing the reaction solution were capped and incubated in a boiling water bath at 95° for 90 min. After cooling to room temperature, the absorbance of the solution was measured at 695 nm using a spectrophotometer. The standard curve of AA was prepared using different concentrations of AA. The antioxidant capacity of each compound was expressed as AA equivalent using the following linear Eqn. established using AA as the standard, (A=0.016C–0.03; R²=0.990) where A is the absorbance at 695 nm and C is the concentration as AA equivalent (μg/mg).

The RSA of the compounds was tested by their ability to bleach the stable radical 2,2-diphenyl-1-picrylhydrazyl (DPPH), as reported previously [31]. Because of its odd electronic structure, DPPH gave a strong absorption band at 517 nm in the visible region. DPPH solution (0.1 mM) was prepared by dissolving 4 mg in minimum quantity of DMSO and making up the final volume of the solution to 250 ml. Different concentrations (2, 1 and 0.5 mg/ml) of test compounds (40 μl) and AA (40 μl), dissolved in DMSO, were added to 3.96 ml of the DPPH solution. The absorbance at 517 nm was determined after 30 min at room temperature, and the scavenging activities calculated as percent of the radical reduction. Each experiment was performed in triplicate. DMSO was used as a control solution and AA as the reference compound. The RSA was obtained as follows, RSA (%) = ODcontrol– ODsample/ODcontrol×100, where, ODcontrol and ODsample is the absorbance of blank (DMSO) and test compounds, respectively at 517 nm. The IC50 values were further calculated.

The effect of derivatives of indoles and benzimidazoles on the growth of Pseudomonas sp., Enterobacter sp. and Bacillus sp. was assessed by bacterial sensitivityfilter paper disc method [32]. Bacterial cultures were procured from Pulses Microbiology Laboratory, Department of Plant Breeding and Genetics, Punjab Agricultural University, Ludhiana. The plates were prepared by pouring 15-20 ml of the sterilized nutrient agar media [33] (HiMedia) on sterilized Petri plates (Tarsons). Plates were then allowed to solidify and stored for 2 d to ensure sterility. Freshly inoculated broth cultures (3-4 h old) of the test organism were then spread on the required medium plates. Sterile filter paper discs of 7 mm diameter moistened with test compound solution in DMSO were carefully placed on the medium under aseptic conditions inoculated with the respective bacterial suspension. Sterilized filter paper discs dipped in DMSO, served as control. Plates were incubated at 28±1° and the diameter of growth inhibition zone (mm) was measured after 24 h. The growth of the organism on medium containing the test compound was also compared with the growth on the plates containing microorganism without test compound as control. 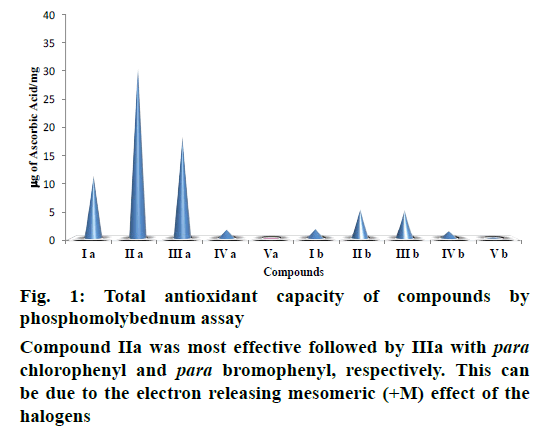 Figure 1: Total antioxidant capacity of compounds by phosphomolybednum assay
Compound IIa was most effective followed by IIIa with para chlorophenyl and para bromophenyl, respectively. This can be due to the electron releasing mesomeric (+M) effect of the halogens

The RSA was scanned using DPPH as substrate. This assay is based on the stabilization of radical reactant. The presence of electron donating substituent increase the stabilization of radical hence making the reactant a better radical scavenger. The radical scavenging efficiency has been calculated in percent and further IC50 values (mg/ml) are presented in Table 2. Out of 2-phenyl-1H-indoles, compounds with electron donating resonance effect were found to be more effective with the trend Ia>IIa>IIIa. This trend may be due to combination of resonance and inductive effect. The compounds with nitro substitution had meta isomer being slightly more effective than para isomer. In case of benzimidazoles (Ib-Vb), the compounds with aromatic substitution were more effective than aliphatic compounds. Most effective was the compound with phenoxymethyl substitution (IVb). Out of aliphatic substituted compounds, the efficiency decreased with increase in chain length.

The perusal of data presented in Table 3 revealed that the test compounds were moderately effective against this bacterium. Six out of ten compounds were active at the concentration of 100 μg/ml with inhibition range of 7.5 to 8.5 mm. Most effective compound at all test concentrations was Ia with para methylphenyl substitution on indole ring. At higher concentrations (2000 μg/ml), all the 2-phenyl-1H-indoles had the inhibition zones more than 13.0 mm while those of benzimidazoles is above 11.5 mm. Out of the halogen substituted indoles, the bromo substituted (IIIa) was more effective at all test concentrations. Amongst the nitro substituted indoles, the para isomer was more promising than the meta isomer at the concentration less than 1000 μg/ml while the two were equally efficient at 2000 μg/ml. Out of benzimidazoles, most effective compound was IIb with 2-propyl substitution. The compounds were further studied for minimum inhibitory concentration (MIC). The data revealed that about six compounds had MIC less than 100 μg/ml (Figure 2A). Only indole IIa had MIC of more than 100 ppm. Compounds did not show any specific pattern against this bacterium. None of the compound was as effective as ampicillin at all the tested concentrations. Screening of compounds against Enterobacter sp. revealed that four 2-phenyl-1H-indoles were active at 100 μg/ml with inhibition diameter in range of 8-9.5 mm (Table 3). The compounds Va and IIb were found to be of comparable efficacy at all the test concentrations. Most effective indole was Va with para nitro substitution on phenyl ring followed by IIIa and Ia. The only meta substituted compound (IVa) was found to be less effective than the other compounds except para chloro substituted (IIa), which was the least effective of indoles at all the test concentrations. Only two benzimidazoles (Ib and IIb) registered higher percent inhibition at all the test concentration amongst this class. The study was continued for analysing the MIC values against this bacterium, which revealed that compound IIb with 2-propyl substitution was most effective with the lowest MIC of 75 μg/ml (Figure 2B).

It may be concluded that the indoles and benzimidazoles possessed antioxidant activity. Indoles showed better antioxidant capacity and the effects were enhanced by the presence of electron donating substituents. The compounds with aromatic system with better radical stabilization had better RSA. The compounds were found to show moderate antimicrobial activity. The compounds were more effective on controlling Gramnegative bacteria in comparison to Gram-positive bacterium but none of them was as active as standard ampicillin at all tested concentrations.

The authors are thankful to CSIR, New Delhi for financial assistance.