In order to understand the basic mechanism of brain diseases, autoregressive model coefficients, frequency band energy, approximate entropy, and Lempel-Ziv complexity of magnetoencephalographic signals of schizophrenia were extracted as features. Distance criterion and Plus-L Minus-R algorithm were used to screen channels, back propagation neural network and support vector machine were applied to distinguish magnetoencephalographic signals of schizophrenic and normal people, and genetic algorithm was adopted to select features with significant differences. Finally, electroencephalography experiments were designed based on steady-state visual evoked potentials, and electroencephalographic signals of multiple subjects were collected. The collected signals were analyzed using discrete Fourier transform, canonical correlation analysis and multivariable synchronization index analysis methods. The results showed that the correct classification rates of schizophrenic and normal people were 96.25 and 98.75 %, respectively. The correct classification rates of back propagation neural network and support vector machine were 98.5 and 99.75 %, respectively. Signal energy, correlation coefficient and synchronization index were the highest at the target stimulus frequency. The in-depth study of brain signals in patients with schizophrenia provided a reference for clinical diagnosis.

Electroencephalography (EEG) is the discharge activity of brain neurons recorded by scalp electrodes. EEG signals indicate the change of voltage difference between two different locations of the brain over time. EEG is often used in the diagnosis and monitoring of epilepsy, and can also be used to analyse other diseases, such as Alzheimer's disease, schizophrenia and so on[1]. Magnetoencephalography (MEG) is a non-invasive technique for detecting brain function. It can detect the magnetic field produced by nerve current in the brain. It is another study of brain function and clinical application developed after EEG[2]. Schizophrenia is a serious and persistent mental illness, which affects 0.4- 0.6 % of the world's population. Most of the patients are in post-adolescence or early adulthood[3].

The MEG data used are from the NIH (National Institute mental Health) Research Center. The magnetoencephalographic data were collected by a 275-channel CTF-275 magnetoencephalograph. The subjects include 10 healthy subjects and 10 schizophrenics. In the experiment, the subjects were in a closed-eye resting state. The acquisition time of magnetoencephalographic signals was 4 min and the sampling frequency was 600 Hz. Before extracting features, the signal was pre-processed as follows: firstly, the signal was filtered by 0.1-50 Hz band-pass filter, then principal component analysis combined with independent component analysis was used to remove artifacts such as eye and electrocardiograph (ECG), and the sampling frequency was 150 Hz. The 40 s data of beginning and end were removed, and the actual analysis time was 160 s, so that the data of each participant was a group of 273×24000 data array.

Extraction of characteristic parameters of magnetoencephalographic signals in schizophrenia:

Before feature extraction, MEG signals were windowed and segmented into stationary signals with 200 sample points per segment. Firstly, feature parameters such as model coefficients, bandwidth energy, AE and LZC were extracted, and 12 feature parameters were obtained from each segment of data. In order to visually represent the extracted features, the average and standard deviation of frequency band energy characteristics, AE and LZC were calculated, respectively. 20 subjects were divided into 10 groups, each consisting of one normal person and one schizophrenic patient. According to Eqn. 1, the separability measure J was calculated for 273 channel data of each group, and all channels were arranged in descending order according to J value, and the first 80 channels were selected. Of the 80 channels in 10 groups, channels with more than 6 occurrences were selected. Eqn. 1, J = trSb/tsSw.

The experimental system mainly included four stages, signal acquisition, pre-processing, feature extraction and pattern classification. Pre-processing is mainly used to eliminate the interference signals in the steady state visually evoked potentials (SSVEP) signal. In feature extraction part, DFT, CCA and MSI were used to extract the features of SSVEP signal. Considering the real-time performance of brain-computer interface (BCI) system, a simple and efficient value comparison method was used for classification. Feature extraction and classification methods were used to identify the subjects' gaze targets. These algorithms are very important to the performance of the whole BCI system. Design and implementation of visual stimulation interface: during the experiment, all stimuli were presented to the subjects simultaneously. The subjects focus on one stimulus, and the oscillating component of the EEG signal was the evoked SSVEP signal. When designing stimulator, the effects of stimulator equipment, stimulus frequency and stimulus colour on SSVEP signal should be considered.

NeuroScan EEG acquisition system was used to collect EEG signals. The system included Synamps2/ RT amplifier, 64-conductive electrode cap and Curry7 analysis software. Synamps2/RT amplifier included two parts, a control box (system) and an amplifier (head box). The position of 64-conductive electrode cap electrode meets the international 10-20 system standard. The parameters of the amplifier such as sampling frequency and available electrodes, were set by Curry7 analysis software, and the impedance of each electrode is displayed online. In addition, the software can also pre-process the collected EEG signals, including baseline correction, removal of direct current (DC) drift, removal of eye, and filtering subsection.

Signal pre-processing was using Curry7 software to pretreat the collected SSVEP signal. Covariance method was used to remove the eye artifacts and segment the data in different time windows. SSVEP frequency recognition based on DFT, Fourier transform is generally used to process linear steady-state signals. The segmented SSVEP signals can be approximately regarded as linear steady-state signals. The collected data were divided into two overlapping segments for 2 s, and the DFT was carried out on the segmented data that are the spectrum of the SVEP signals of 7.5, 8.57, 10 and 12 Hz, respectively. Segmentation with overlapping multi-time windows for the data of three subjects was conducted, and the data after segmentation were performed with DFT. The energy at all four stimulation frequencies was calculated and the frequency corresponding to the maximum energy was used as the target frequency recognized.

Six AR model coefficients, four frequency band energies, one AE feature and one LZC feature obtained by extracting the characteristic parameters of the signal. Finally, 12 characteristic parameters were obtained from each segment of the data. In order to visually represent the extracted features, the average and standard deviation of band energy characteristics, AE and LZC were calculated, respectively. Fig. 1 shows the energy of four bands, δ, θ, α, and β. Fig. 2 shows the AE and LZC. 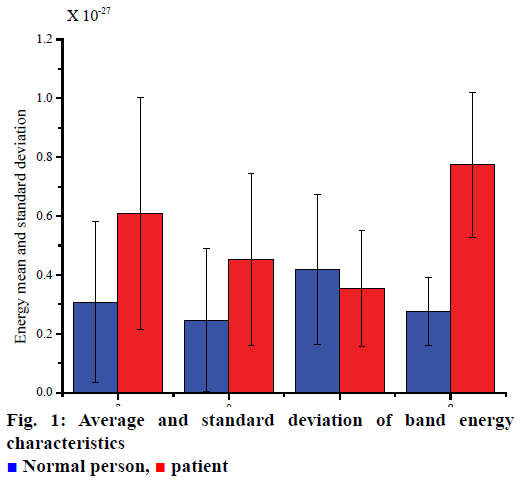 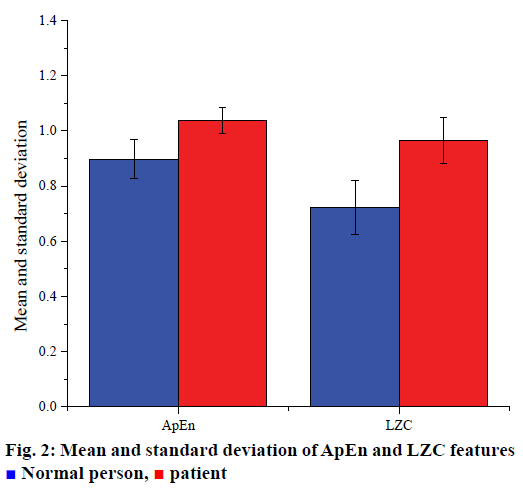 Figure 2: Mean and standard deviation of ApEn and LZC features

Because there were redundant channels in 273 channels of MEG signal, the distance criterion was used to preselect 273 original channels. Separability measure J was calculated for 273 channel data of each group, and all channels were arranged in descending order according to J value. Separability measure of the first 80 channels was selected as shown in fig. 3. The results of channel selection based on BP neural network and SVM classifier are shown in Table 2. The shadows in the table represent the channels in the temporal lobe. 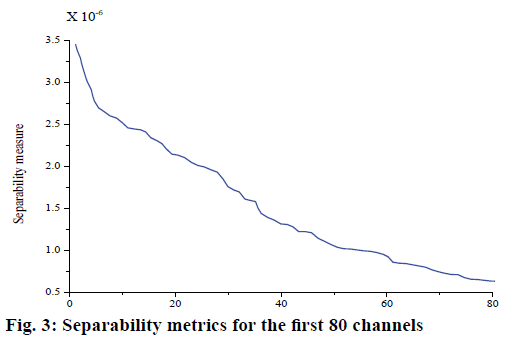 As can be seen from Table 2, most of the selected channels are located in the temporal lobe region, which indicates that the channels in the temporal lobe region may carry more differential information. In addition, the evaluation function values of the 6th order AR coefficients were relatively high, and the highest classification accuracy could reach 98.75 %. Twelve channels, MRF25, MRC15, MRF65, MLO42, MRF44, MRT31, MRF14, MRT11, MLO41, MRT2 2, MRT53 and MRF35, which appear at least nine times in the 12 columns screened by BP, are selected as the final result of LRS algorithm based on SVM classifier. Similarly, 13 channels, MLO41, MRT 24, MLC 42, MRF 14, MRT 11, MRF 65, MRT 31, MRT 44, MRF 44, MRT 51, MRT 32, MRT 21 and MRF 25, which appear at least nine times in 12 columns of SVM screening channels, were selected as the final results of the BP neural network-based LRS algorithm. After using LRS method to select channels based on BP neural network classifier, there were 144-dimensional (12-channel×12 features) features, and 156-dimensional (13 channels×12 features) features based on SVM classifier selected. Proper feature selection can effectively remove irrelevant and redundant features and improve the learning efficiency of classifiers.

SSVEP signals were generated by periodic visual stimuli of a certain frequency. In addition to the main fundamental component, they usually contain harmonic components. In DFT analysis, the results are shown in fig. 4A-D. It is obvious that the peak energy of the signal appears at the target stimulus frequency. The data of three subjects were divided into overlapping segments with multiple time windows. The data after segmentation were carried out with DFT and the energy at all four stimulation frequencies was calculated. The frequency corresponding to the maximum energy was used as the target frequency recognized. The results of SSVEP frequency recognition based on DFT method are shown in fig. 5. With the increase of data length, the recognition accuracy was improved. 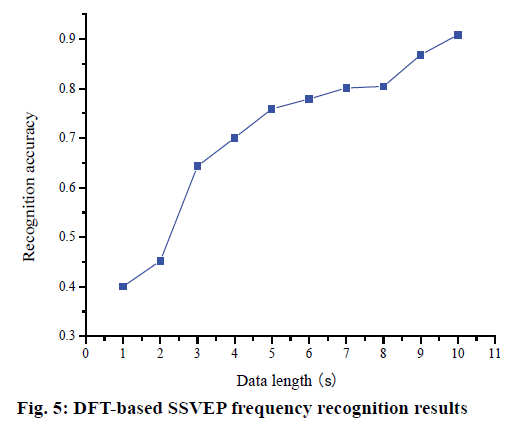 A multi-dimensional complexity-based method for the analysis of magnetoencephalographic signals in schizophrenia was proposed. The method of genetic algorithm combined with BP neural network and SVM was used and the classification accuracy of magnetoencephalographic signals in schizophrenia and normal people was 98.5 and 99.75 %, respectively. At the same time, EEG experiments based on SSVEP were designed and EEG data of many subjects were successfully collected. Spectrum analysis of SSVEP signals was carried out by DFT method. It was found that the energy of signals was the largest at the target stimulus frequency, and the recognition accuracy was increased with the increase of data length. It is helpful to further understand the basic pathogenesis of brain diseases and provide reference for clinical diagnosis of brain diseases.