Adverse drug reactions are considered to be among the leading causes of morbidity and mortality. Approximately 5-25% of hospital admissions are due to adverse drug reactions and 6-15% of hospitalized patients experience serious adverse drug reactions, causing significant prolongation of hospital stay. Thus this study was aimed at determining adverse drug reactions by conducting spontaneous reporting in secondary care Govt. District Head Quarters Hospital at Ooty. A prospective Spontaneous Adverse Drug Reaction reporting study was conducted over a period of 12 months from July 2012 to June 2013. The assessment, categorization, causality, severity and preventability were assessed using standard criteria. A total of 47 suspected adverse drug reactions were reported during the study period. Over all incidences was 1.29% among the study population. Antibiotics (31.91%) were the class of drug most commonly involved, while ciprofloxacin (14.89%) was the most frequently reported. Type H (Hypersensitivity) reactions (51.06%) accounted for majority of the reports and a greater share of the adverse drug reactions are probable (89.36%) based on causality assessment. Mild reactions accounted 82.97% based on modified Hartwig and Siegel severity scale. In 76.59% of the reports, the reaction was considered to be preventable based on Schumock and Thornton preventability scale. The implementation of monitoring based on spontaneous reporting will be useful for the detection and evaluation is associated with increase in morbidity and duration of hospitalization. This study also has established the vital role of clinical pharmacist in the adverse drug reaction monitoring program.

Clinical pharmacy is defined as that area of pharmacy concerned with the signs and practice of rational medical use [1]. Clinical pharmacy services are those provided by pharmacists in an attempt to promote rational drug therapy that is safe and appropriate, one of the services provided by them is pharmacovigilance [2]. Presently pharmacovigilance has emerged as a part of clinical pharmacy by ensuring the best pharmaceutical care. Adverse drug reactions (ADRs) are considered to be among the leading causes of morbidity and mortality [3].

According to WHO, an adverse drug reaction was originally defined in 1972 as a response to a drug that is noxious and unintended and occur at doses normally used in humans for the prophylaxis, diagnosis, or therapy of disease, or for modification of any physiological function [4]. ADR reporting can alert the health care providers against the chances of occurrence of unexpected risks associated with the drugs. In India, pharmacovigilance program is in evolving stage and hence, pharmacists’ involvement in such activities has been low [5].

The World Health Organization [6], The United States Food and Drug Administration [7] (USFDA) and the European Medicines Agency [8] (EMA) have recognized the need to evaluate the beneficial and harmful effects of drugs and to continually improve their use in order to provide appropriate, safe and effective drug therapies.

The purpose of this study was reporting, assessing, monitoring and observing the outcome of management of ADRs. The main objective was to create awareness among the health care professionals and patients on adverse drug reaction and its reporting. The implementation of ADR monitoring based on spontaneous reporting will be useful for the detection and evaluation of ADRs associated with increase in morbidity and duration of hospitalization.

A prospective study was conducted for a period of 12 months from July 2012 to June 2013 in Government Head Quarters Hospital (GHQH), Ooty, India. It is a 420‑bedded hospital providing secondary healthcare to people of The Nilgiris district. Institutional ethical committee approved the study (JSSCP/DPP/IRB/01/2012‑13 Date 21.10.2012).

The clinical pharmacist who was posted in a particular ward, used to take part in the ward rounds along with the health care professionals and actively monitor for any ADRs. Patients who developed ADR were interviewed throughout their hospital stay, from the day ADR was reported. The case details were documented in ADR documentation form. ADR alert card was given to the patients who exhibited hypersensitivity type of reactions or near fatal reactions with any component of the drug. Thank you cards were issued to the healthcare professionals who reported ADR, so as to encourage further reporting. ADRs were analyzed for incidence, type of ADRs, drug classes, and individual drug. ADRs were also assessed for causality, severity and preventability using different scales. 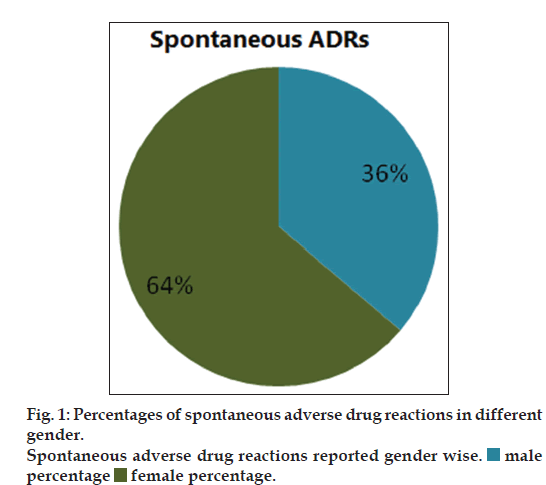 The individual drugs that produced ADRs involved ranitidine 14.89% (n=7) and ciprofloxacin 14.89% (n=7) which produced highest number of reactions such as rashes and itching (Table 1).

Table 2: Classification Of Causality, Severity, Preventability And Type Of Reactions

ADR reporting and monitoring program targets to identify and quantify the risks associated with the drug use and thus promoting rational use of drugs. Involvement of a pharmacist in patient care can help in prevention and early detection of ADRs. Hence the study has established the vital role of clinical pharmacist in the ADR monitoring programs.

The authors wish to thank Dr. Mohd. Haneefa, superintendent and other senior doctors of Government District Head Quarters Hospital, Ooty for their constant support and help during this study.