A drug-related problem (DRP) is defined as an event or circumstance that actually or potentially interferes with desired health outcomes. DRPs can lead to ineffective pharmacotherapy and may become responsible for drug-related morbidity and mortality [1]. In modern clinical practice, prescribers often use more number of drugs to address the comorbidities in patients; and this situation further complicates when patients visit physicians of other specialities and may lead to potential drug related problems. Studies evaluating the prescriptions for elderly patients have observed frequent polypharmacy in the prescriptions and use of excessive or potential harmful drugs. Prescriptions containing multiple medications not only increase complexity of therapy regimen but also make the patient poorly adherent to the prescribed medication [2]. Often doctors are also unaware about the medications the patients are taking[3]. Many patients also hesitate to disclose the use of other alternative therapies to their prescribers. The likely hood of herb-drug interactions is same or high as drug-drug interactions (DDIs) because herbal formulations contain mixtures of various plant constituents that are pharmacologically active[4]. Pharmacist’s role is very much appreciated in hospital settings in identifying and resolving clinically important DRPs[5]. In community settings, patients with chronic diseases with comorbidities often take more medicines including over-the-counter (OTC) drugs. Such patients are prone to have more chances of experiencing DRPs in their prescriptions. If such DRPs are analysed and resolved, the therapeutic outcomes will be much better and saves the unwanted drug expenditure [6]. The present study is designed to assess the incidence and severity of DRPs precipitated in prescriptions received by community patients with chronic diseases, dwelling in community. Further, an assessment was also made to analyse the economic impact of the DRPs.

The present study was a prospective study, conducted in the selected rural communities of south India, over a period of nine months from June 2012 to February 2013. Patients of either sex suffering from chronic diseases willing to give consent were included in the study. Acutely ill patients were excluded from the study. The study was approved by the Institutional Human Ethics Committee of JSS College of Pharmacy, Mysore. The study pharmacist conducted house visits and reviewed prescriptions and physician notes of patients with chronic diseases. Collected data was documented in the suitably designed data collection form. DRPs identified in prescriptions were categorized based on Hepler and Strand classification. Each DRP was assessed for its level of significance and was rated either as minor, moderate or major based on its threat to the patient.

During the study period, about 550 houses were visited in different rural localities of Mysore city and a total of 2370 people (1170 men, 1200 women) were interviewed. Among them, 215 (105 men, 110 women) patients were identified with chronic diseases and they were interviewed.

Table 1: Icd 10 Classification of the Chronic Diseases among the patients

A total of 90 DRPs (40 in men, 50 in women) were identified at a rate of 41.8%. Of the 90 DRPs, 56 were observed in adults and 34 were observed in geriatric population. The most common DRP found was ‘failure to receive drug’, which was accounted for 24% (n=22) of total DRPs followed by untreated indication 20% (n=18). Classification of DRPs is presented in Table 2. All the DRPs that led to the primary consultation and hospitalization was also calculated and presented in Table 3. Diseases involved in precipitating the DRPs were assessed and presented in Table 4. Among all the DRPs resulted, 10% of the DRPs were severe and 41% were moderate resulting in primary consultation and hospitalization. Results are presented in fig. 1. 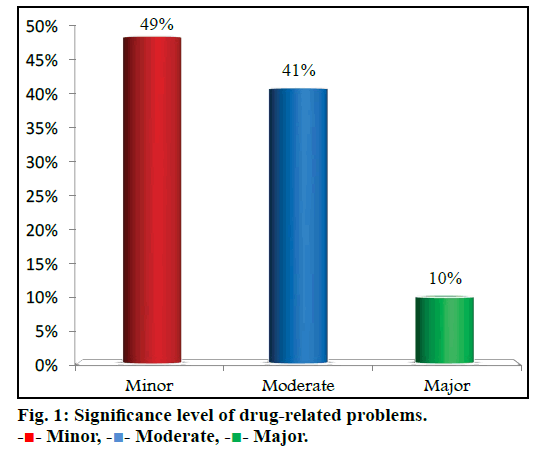 The study provides data on extent of DRPs observed in patients suffering from chronic diseases in community settings of Mysore city. The results of this study provide information which may be used in designing measures to minimize DRPs in patients with chronic diseases in community. Such corrective measures not only improve quality use of medicines but also improve quality of life.

During the study period, 90 DRPs were observed in a total of 215 patients with a prevalence rate of 41.8%. In the study carried out by Paulino et al. [8] where the prevalence of DRPs was reported to be 63.7%. The incidence rate in our study was found lower compared to the above study. This may be because of poor disclosure of health related information by patients to the study pharmacist and also the rural living conditions.

Among 90 DRPs identified during the study period, male patients who had DRPs are 44.5% (n=40) and females were 55.5% (n=50). There is predominance of gender for having DRP between males and females. In our study female population were found more prone to having DRP, this observation is contrasted with the demographic reports of the study conducted by Koh et al. who cited there is no predominance of gender for having DRPs [9].

The prevalence of DRPs were (40.6%) in geriatric patients and (40.06%) in adults, it is observed from the study that there is no much significance in age group for having DRPs. Among the potential contributing factors of DRPs, the association between age and the incidence of DRPs has much connotation and it is well documented in a study conducted by Lau and Dolovich, which revealed that geriatric patients are enduring DRPs at a rate of 62.8% which is found to be higher compared to present study [10].

Most of the DRPs observed in our study were due to failure to receive drugs (24.0%). It was followed by untreated indication (20.0%) and DDIs (16.0%). This observation is supported with the study conducted by Koh et al. [9] in which noncompliance and DDIs accounted for a substantial amount of potential DRPs. The reason for these DRPs in high number in our study may be due to inadequate understanding about the disease and medications among the patients. Poor economic status of patients from rural area contributed for failure to receive the drugs.

The causality of adverse drug reactions (ADRs) identified was assessed and documented. Majority (62.5%) of the ADRs belonged to ‘probable’ category on WHO scale. Half (50.0%) of the observed ADRs were ‘mild’ in severity and rest were ‘moderate’ and none of the ADRs were found to be ‘severe’. Amongst the identified ADRs, 67.5% were ‘not preventable’ and 8.54% of them were ‘probably preventable’ and 20% were ‘definitely preventable’. Often suspected ADRs are not reported adequately by prescribing doctors it may be due to heavy patient load and non-mandatory reporting system.

DRPs identified were preventable in majority of cases i.e. diclofenac is used as analgesic where aceclofenac is taken by patient at same time. This DRP was categorized into over-usage of medication which could have been prevented if a proper history of patient had been obtained.

Untreated indications were causing 20% of total DRPs. Hypertension was the main health related issue that was left untreated in the study patients. In majority of the cases, the issues were identified by study pharmacist and brought to the notice of patients and were directed them to consult their physicians for further evaluation and needful action.

Sub-therapeutic dose was indicated in 14% of total DRPs. In one such instance involving sub-therapeutic dose, a patient receiving 15 units of insulin mixtard since 18 months, and on examining patient's fasting blood glucose levels, it was found higher than normal levels (140 mg/dl). This is because the dose given was not adequate for the patient to keep his glucose levels under control. This type of incidences happen as patients do not have the regular follow ups in the primary care settings.

DRPs identified were assessed and rated as minor, moderate and major. The percentage of ‘major’ DRPs (10%) identified was lower than the study finding observed by Alderman [11] in which ‘major’ class of DRPs were 20%. The difference in the number between the two studies is due to lack of detailed availability of patients condition, as mentioned study was conducted in a well-established hospital where as present study was done in a rural community settings.

An instance of a DRP categorized as ‘major’ where patient was receiving venlafaxine for the depression. The patient was experiencing dizziness as an ADR and the patient was supposed to be confined to bed if it continues. This ADR was identified and brought to notice of the concerned physician and also educated the patient about the adverse effect of drug and also the strategy to overcome.

An instance of DRP categorized as moderate where a patient was taking pantoprazole for longer period than prescribed duration, the research pharmacist after assessing the problem, advised the patient for cessation of the drug. This intervention resulted in reduction of cost of medication usage and also ensured the safe use of drugs.

DRP are known to cause hospitalization, increased suffering and decreased quality of life and increased health care expenditures. After identifying and assessing a DRP, the expected clinical outcome in terms of improved therapeutic effect and direct and indirect cost implication was hypothetically calculated and the net financial burden to the society was demonstrated. In our study we found that the net financial burden due to DRPs was Rs. 8 464 950. This amount would have been saved if adequate intervention was made and prevented the DRPs.

According to a study conducted by Westerlund and Marklund, roughly 64 million prescriptions are filled each year in Sweden. If DRPs were identified resolved at the same rate, a total of €358 million can be saved when extrapolated at national level [12]. Similarly in our study, the findings are extrapolated to the entire Mysore city population the net societal savings may be projected as Rs. 3 413 975 600. The above findings in both studies suggest the importance of pharmacist interventions in minimizing the DRPs.

DRPs may occur in all stages of the medication process starting from prescribing to dispensing stage. Lack of follow-ups and reassessment of medical treatment also contribute to DRPs [13,14]. Pharmaceutical care is a cooperative activity between health care professionals provided directly to the patient and adds to the effectiveness of improving the quality of patient care. Pharmaceutical care identifies and resolves actual or potential DRP [15].

Pharmacist intervention will decrease the incidence of DRPs in patients with chronic diseases and comorbidities. Such service will increase the net societal savings and provides a better patient care.

Authors would like to thank JSS University, Principal, JSS College of Pharmacy, and Head, Department of Pharmacy Practice for their continuous support.