Asymmetric membrane capsule (AMC) is a non-disintegrating, single core osmotic system, consisting of drug filled in shells which are made up of water insoluble polymers by phase inversion technique. The membrane or shell of these capsules contain pore forming water soluble additive, which after coming in contact with water, dissolve, resulting in an in situ formation of a microporous structure. The advantages of AMCs are; higher rate of water influx, controlling the release of freely soluble drugs, pH independent release and minimize the exposure of drug to the gastrointestine (so that, reduced gastric irritation and degradation of drugs).

The in vitro release rate of a drug from an asymmetric membrane capsule was dependent on the capsule shell composition as well as the fill (core) formulation. For a given shell composition, the release was dependent on osmotic pressure (solubility) of the core ingredients and for a given core composition, the release is depends on the capsule shell permeability. Sustained zero-order drug release can be achieved using AMC devices while the concentration of dissolved drug within the fluid portion of the core remains constant. When the drug concentration in core fluid falls below the saturation, then the release rate declines [1,2].

The terbutaline sulphate (TBS) is a β-adrenoreceptor agonist widely used in the treatment of asthma. The oral dosage regimen of TBS is 5 mg twice or thrice daily, the plasma half-life is approximate 3-4 h. The drug produces GI irritation with extensive first pass metabolism and hence has a poor oral bioavailability of only 14.8%. Therefore, TBS was chosen as a model drug with the objective of improving bioavailability and therefore therapeutic efficacy with lower doses and hence better patient compliance.

The aim of the present study is to optimize the formula for AMCs of ethyl cellulose (EC) to deliver water soluble drug TBS in controlled manner and to study the effect of sorbitol as pore forming agent on drug release.

AMCs were prepared by phase inversion process [2], in which the membrane was precipitated on glass mould pins having a diameter of 6, 7 and 8 mm, so as to form two sizes of capsules. The glass mould pins ware dipped into polymer solutions containing EC dissolved in acetone, ethanol and varying concentration of sorbitol as shown in Table 1. Quenching was done by 10% w/v glycerin for 10 min which resulted in the formation of an asymmetric membrane. The quenched pins were withdrawn and air dried. The capsules were stripped off the pins, trimmed to size and stored in desiccators [3,4].

Table 1: Formulae for the preparation of the AMCs

The thickness of the asymmetric membrane of prepared capsules was measured using a screw gauge. From each formulation, thickness was measured for three different capsules and its mean was considered. The prepared AMCs were filled with water soluble dye, amaranth, sealed by sealing solution and placed in 50 ml distilled water. The pattern of dye diffusing through the asymmetric membrane wall of AMCs was observed for two hours and afterwards these was transferred to 50 ml 10% NaCl solution to observe the effect of osmotic pressure on dye diffusion [5-6]. Transverse section of prepared capsules was prepared and observed under the microscope, to confirm the formation of the pores.

The filled capsules were subjected to release study using USP dissolution apparatus II (100 rpm, 37°) in 500 ml of distilled water as dissolution medium. The samples were withdrawn at specific time intervals and analyzed by UV spectrophotometer at λmax 277nm.

Six AMCs of EC were prepared by phase inversion technique, using sorbitol as pore forming agent. All AMCs appeared to be white and opaque with no visible physical defect. Membrane thickness was found to be increased with increase in concentration of EC. The thickness of the capsule wall also increased with increase in concentration of pore forming agent (fig. 1). 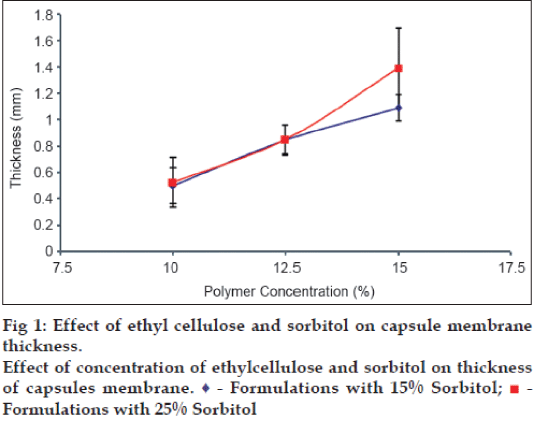 The release of amaranth dye from dye encapsulated AMCs was observed in distilled water after an average time period of 28 min from capsules A, B, C and D,which was continuing for another 2.5 h. But no release was observed from E and F capsules, even after 2 h, due to their higher thickness. So these capsules were rejected for in vitro drug release study. However, no release was observed when the same capsules were transferred into 10% sodium chloride solution. In such a case, the osmotic effect gets nullified, suggesting that the prepared AMCs follow osmotic principle for the release of encapsulated material.

The pores formed were confirmed by observing a transverse section of capsule shell under microscope (100X) and found that the porous nature and size of pores increase with increase in concentration of sorbitol (fig. 2). Qt ? Quantity in % of drug released at time t. TQ ? Time in min required to release quantity Q of drug.

Table 3: Comparison of in vitro release parameters of terbutaline sulphate from ethylcellulose AMCs 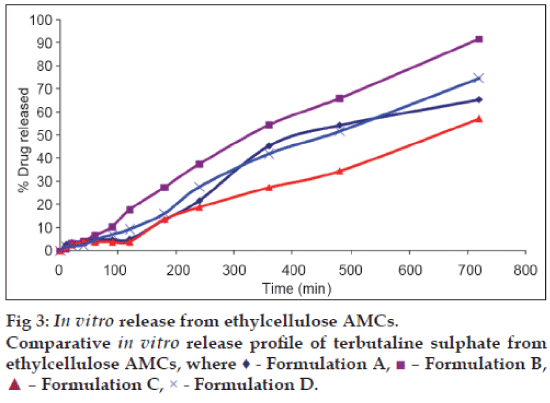 The authors would like thank the Nitte Education Trust, Mangalore for providing the necessary facilities for carrying out this investigation. Also thanks to Astra IDL, Bangalore for complimentary gift sample of terbutaline sulphate.