Bcl-2 is an antiapoptotic gene that was originally found in over expression of B-cell lymphoma [1]. Recent studies suggested that Bcl-2 has an important role in regulating mitochondrial metabolism and function [2,3], and that its protective effect may not be limited to an apoptotic role only. Ischemia and reperfusion (I/R) injury is a phenomenon whereby cellular damage is caused by hypoxic condition and further damaged caused by resortoration of oxygen delivery in the liver. Deprivations of oxygen, nutrients, or growth factors are important to cause ischemic and reperfusion injury which leads to necrosis and apoptosis during hepatic I/R injury [4].

Oxidant stress-induced cytotoxicity is mediated through oxidation of pyridine nucleotides, mitochondrial calcium overload, generation of superoxide radicals, formation of membrane permeability transition pores leading to breakdown of the mitochondrial membrane potential [5]. It has been suggested that antiapoptotic family members such as Bcl-2 oppose release of cytochrome c release and blocking or opening of a cytochrome c release pathway. Mitochondrial generation of ATP occurs via the F1Fo-ATPase, which generated from tri carboxyl pathway (TCA) pathway. Cell energetic depends on the appropriate transport of ADP into mitochondria and transport of ATP to the cytosol.

During ischemia, when lack of oxygen inhibits mitochondrial electron transport and mitochondrial generation of ATP, the F1Fo-ATP can in reverse and consume TCA generated ATP [6,7]. Thus Bcl-2 mediated alternation in adenine nucleotide transport has important implications of cell energetic and ATP synthesis.

There are no reports on the relationship between the mitochondrial TCA pathway and apoptosis in ischemia followed by reperfusion injury; in addition, there is a lack of information to correlate Bcl-2 gene expression with TCA pathway during ischemia followed by reperfusion injury. In this study, our objective was to obtain insight into between the relations with ischemia -reperfusion induced necrosis and apoptosis specifi c overexpression of Bcl-2 suppresses cell death as well as well as potential mechanisms by which Bcl-2 might modulate cellular metabolism.

Twelve Wistar rats were divided into sham-operated group (I, n=6) and ischemia and reperfusion group (II, n=6). All animals received human care in compliance with the Guide for the Care and Use of Laboratory Animals. Experimental protocols were reviewed and approved by Institutional Animals Ethical Committee. The hepatic I/R protocol were performed as per procedure of Chattopadhyay et al. [8]

Hepatocytes were prepared by the collagenase perfusion method [15] and isolated hepatocytes (4×102 cells/ml) were supplemented with 3 ml of ice cold 6% (w/v) perchloric acid, sonicated and left at 0o for 20 min. The extracts were centrifuged to remove protein and neutralized with ice cold 6 M NaOH/0.5 M morpholine sulphonic acid. ATP content was determined in neutralized cellular extracts by the luciferase-luciferin assay [16].

Total cytoplasmic RNA of each group was isolated from liver tissue by the Trizol method (according to GIBCO specifi cation). Polymerase chain reaction (PCR) primer was against rat Bcl-2 sequences obtained from gene bank (Fastaf). The sense primer used was a 21–mer with a sequences of CGT-CATAAC- TAA-AGA-CAC-CCC and the reverse primer was also a 21 mer with a sequences of TTC-ATCTCC- AGT-ATC-CGA-CTC. The product length was 234 base pairs Tm of 52.3o. The cDNA was amplifi ed by PCR amplification with Ampli Taq Polymerase. Amplified product was resolved by electrophoresis on 1.5% agarose gels (Sigma, St Louis, USA), stained with ethidium bromide and visualized under ultraviolet light. A 1 kbp DNA ladder molecular weight marker was run on every gel to confirm expected molecular weight of the amplification product. Bands were quantitatively measured by densitometry analysis system (Molecular Analyst/ PC, Windows software for Bio-Rad’s (Hercules CA). Image Analysis System Version 1.5, and the data are expressed in relative optical density (OD) units.

Hepatocytes (1×109/l) of each group were washed with phosphate buffer saline (PBS) at 4º and exposed to pre-chilled ethanol at 4º for 30 min. They were then washed again with PBS, exposed to PI 50 mg/l, 0.1% Triton X-100, 0.01 mmol/l EDTA (Na)2 and RNase 50 mg/l at normal temperature in darkness for 12-24 h. Specimen were then subjected to the FACS-420 Flow Cytometry Analyzer (New York, Becton Dickinson and Company, USA) to evaluate apoptosis levels.

Data are expressed as mean (SD). The signifi cance of difference was analyzed by one-way ANOVA followed by Tukey’s post-hoc test. P<0.05 was considered signifi cant.

In the present study, 20 μl Bcl-2 and GPDH PCR products were separated by electrophoresis and stained with EB. PCR products of Bcl-2, GPDH were expressed at 234 bp and 510 bp, respectively (fig. 1). Expression of Bcl-2 gene in group II was lower (P<0.05) in comparison with sham-operated group after 1 h ischemia followed by 3 h reperfusion. 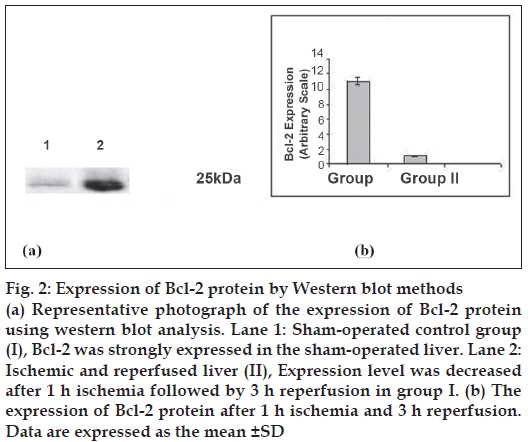 Mean±SD, n=6. aComparison are made between sham-operated control (group I) with I/R injury (group II).

Table 2: Apoptotic and necrotic cells and atp levels in liver after ischemia reperfusion.

Apoptosis was evaluated based on some distinct morphological features such as cell shrinkage, chromatin condensation, oligonucleosomal DNA fragmentation and finally break down of the cell into smaller units (apoptotic bodies). Sham operated rat showed re no sign of apoptosis (fig. 3a) whereas reperfusion of the ischemic liver caused severe hepatocellular apoptosis after 1 h ischemia followed by 3 h reperfusion in Group II (fig. 3b). In this study we found that suppression of Bcl-2 showed increased numbers of necrotic and apoptotic cells. These findings are consistent with previous study that overexpression of Bcl-2 reduced ischemia/ reperfusion injury [20]. In addition, this study provides new insight into the mechanism by which Bcl-2 mediates hepato-protective. Depletion of ATP was observed during I/R injury, which provides a evidence that the rate of mitochondrial free radical production is inversely proportional to the rate of electron transport and this observation supports previous work [21].

Mitochondrial degeneration and dysfunction has been reported in I/R injury. The decrease activities of TCA cycle (MDH SDH α-KGDH) enzymes were observed in I/R induced injury rats. The impaired mitochondrial function, which may contribute to the pathogenesis of I/R induced toxicity, might be a reason for observed decrease in the activities of TCA cycle enzymes [22]. Under ischemic conditions (anaerobic phase), ATP produced by TCA using glucose or storage glycogen which can account for 30-50% of total ATP production [22]. The inhibition of mitochondrial respiration by low oxygen supply results in stimulation of glycolytic flux [23]. This phenomenon is known as Pasteur effect and indicates that in hepatocytes TCA and mitochondrial respiration closely functionally connected [24]. The activities of respiratory marker enzymes NADH dehydrogenase and cytochrome –C-oxidases were lowered in I/R induced rats. Decreased activity of mitochondrial and respiratory marker enzymes in ischemic condition has been previously reported [25]. Much less is known about the mitochondrial energy production in the process of necrosis and apoptosis. Studies preformed to understand the relation between apoptosis, necrosis, Bcl-2 overexpression and mitochondrial energy production and respiratory enzymes.

In conclusion, we fi nd that Bcl-2, in addition reducing ischemic followed by reperfusion induced necrosis and apoptosis, decline ATP production by inhibition of TCA cycles as well as inhibition of mitochondrial respiration. Although it is difficult to analyze the pathophysiological mechanism of apoptosis involved in I/R mediated injury, our finding showed that the suppression of Bcl-2 gene and inhibition of TCA cycles may provide a clue.