Gastroretentive bimodal drug delivery systems of lamotrigine were developed using immediate release and extended release segments incorporated in a hydroxypropyl methylcellulose capsule and in vitro and in vivo evaluations were conducted. In vivo radiographic studies were carried out for the optimized formulation in healthy human volunteers with replacement of drug polymer complex by barium sulphate and the floating time was noted. Here the immediate release segment worked as loading dose and extended release segment as maintenance dose. The results of release studies of formulations with hydrophillic matrix to formulations with dual matrix hydroxypropyl methylcellulose acetate succinate shown that as the percentage of polymer increased, the release decreased. Selected formulation F2 having F-Melt has successfully released the drug within one hour and hydrophillic matrix composing polyethylene oxide with 5% hydroxypropyl methylcellulose acetate succinate showed a lag time of one hour and then extended its release up to 12th hour with 99.59% drug release following zero order kinetics with R 2 value of 0.989. The Korsmeyer-Peppas equation showed the R 2 value to be 0.941 and n value was 1.606 following non-Fickian diffusion pattern with supercase II relaxation mechanism. Here from extended release tablet the drug released slowly from the matrix while floating.

Epilepsy is a common chronic neurological disorder with seizures and can occur to any person [1-3]. Epileptic seizures occur due to elevated neuronal activity in the brain [4]. Epileptic patients show seizures though treated with antiepileptics [5,6]. More than 5 crores of people suffer with epilepsy of which only some 1.5 crores people avail proper therapy. Antiepileptics are given alone or as adjunctive therapy and certain drugs are even given for treatment of bipolar disorder as well. Lamotrigine is a good antiepileptic that is administered to control seizures and bipolar disorder with a trade name Lamictal [7]. Lamotrigine is a sodium channel-blocking antiepileptic, which restrains voltage-dependent sodium channels and reduces the release of the glutamate and aspartate to bring brain back to orderliness [8]. It is in use for more than a decade in Europe and more than five years in United States and is showing better efficacy with sufficient tolerability [9]. However, Stevens-Johnson syndrome, drug rash, eosinophilia and systemic symptoms (DRESS) syndrome and toxic epidermal necrolysis might be caused by unregulated plasma concentrations of lamotrigine even leading to mortality [10]. Nevertheless this could be controlled by formulating lamotrigine as a controlled drug delivery system [11]. Moreover the drug displays felicitous absorption profile in gastric environment and the ascending part of the colon. This property additionally with solubility with pH dependency makes it suitable to design as a gastroretentive floating drug delivery system [12]. The drug concentrations can be controlled by formulating bimodal drug delivery systems with combination of immediate release tablet and the floating extended release tablet placed in a hydroxypropyl methylcellulose capsule to have spatiotemporal delivery of the active [13,14]. This study was conducted with an aim to develop buoyant gastroretentive drug delivery system incorporating 100 mg of lamotrigine eudragit complex into two segments sharing equal amounts in immediate and extended segments containing drug equivalent to 25 mg each. The immediate release segment and floating extended hydrophilic polymeric matrix, which would release the drug spatially at stomach in a temporal pattern [15,16]. The immediate release segment releases the drug spontaneously once the capsule shell dissolves in the dissolution medium. The capsule shell dissolved after 3 min [17,18]. The hydroxypropyl methylcellulose acetate succinate provides the one-hour lag time for the extended release segment to release the drug preventing the dose dumping [19].

To check the solubility of lamotrigine excess of drug is added to water, 0.1 N HCl, 4.5 pH buffer, 6.8 pH buffer and 7.4 pH buffer and was mixed on a rotary shaker for 48 h and the aliquots are taken, filtered and then estimated spectrophotometrically at 244 nm [20,21].

Eudragit E100 and lamotrigine were taken in a mortar at a ratio of 1:1 (eudragit E 100:lamotrigine). To this a small quantity of ethanol was added with trituration to obtain a slurry-like consistency. Then lamotrigine was incorporated slowly into the slurry and trituration was continued further for 15 min to get a soft mass of lamotrigine and eudragit E 100. The soft mass was then transferred to a syringe, extruded out, air dried at room temperature for 24 h, pulverized, passed through sieve no. 60 and was stored in a desiccator over fused calcium chloride [22]. This kneaded material was then made into immediate release tablets and extended release tablets by direct compression method. Different formulations of lamotrigine orodispersible tablets were designed to be prepared by direct compression technique using three super disintegrants, (F-Melt, Primellose, and Polyplasdone XL-10). Super disintegrants at various levels were added keeping all other ingredients constant. Drug-polymer complex, super disintegrants, avicel pH 102, were accurately weighed and passed through a 40-mesh screen to get uniform size particles and mixed in a glass mortar for 15 min. The obtained blend was lubricated with aerosil and glidant (sodium stearyl fumarate) and mixing was continued for further 5 min. The resultant mixture was directly compressed into tablets by using 7 mm round flat faced punch on a rotary tabletting machine. Compression force was kept constant for all formulations. Formulations designed were assigned with formulation codes as shown in Table 1.

Lamotrigine extended release tablets were prepared using the direct compression method. Different formulations of lamotrigine were designed to be prepared by direct compression technique using strategies of hydrophyllic or lipophillic matrices and dual matrix systems. Drug-polymer complex, matrix forming agents, hydroxypropyl methylcellulose acetate succinate, avicel pH 102, were accurately weighed and passed through a 40-mesh screen to get uniform size particles and mixed in a glass mortar for 15 min. The obtained blend was lubricated with aerosil and glidant lubripharm (sodium stearyl fumarate) and mixing continued for an additional 5 min. The resultant mixture was directly compressed into tablets using 7 mm round flat-faced punch on a rotary tabletting machine. Compression force was kept constant for all formulations. Formulations designed were assigned with formulation codes as shown in Table 2.

The swelling nature of tablets can be studied by weight gain or water uptake. The water uptake study of the dosage form was conducted by using USP dissolution apparatus-II in a 900 ml of 0.1 N HCl, which was maintained at 37±0.5°, rotated at 50 rpm. At predetermined intervals the tablets were withdrawn and weighed. Percent swelling of the tablet was determined using the formula %WU=((Wt-Wo)/Wo)×100, where, Wt is the weight of the swollen tablet, Wo is the initial weight of the tablet [23].

In vitro release data were subjected to model fitting analysis to know the order of drug release by treating the data according to zero order, first order and Higuchi’s release kinetic equations and Korsmeyer-Peppas Eqn [24-28].

The floating lag time and the total floating time were determined in the USP dissolution apparatus containing 0.1 N HCl, (pH 1.2), maintained at 37±0.5°. The time between the dropping of the tablet and time to rise and float at the surface of the medium was considered as floating lag time. The duration of time the dosage form remained constantly on the surface of medium was considered as the total floating time [29-32].

In vivo evaluation of floating

Six healthy male human volunteers in the age group of 18-30 and 55-70 kg body weight were selected for the study. The Floating tablets excluding drug (lamotrigine) and replaced with barium sulphate was administered orally. During the study they were served standard breakfast and water was allowed to be taken. The first X-ray was taken after 15 min of the tablet administration and further images were taken after at 1, 4 and 8 h.

The solubility of lamotrigine was found to increase with decrease in pH with high solubility at acidic pH and low solubility in alkaline pH (fig. 1). The complexation with Eudragit improvised the solubility of lamotrigine (fig. 2). All formulations showed a minimum of 50% rise in weight after water uptake for a period of 8 h with hydrophillic matrix systems FHM and FHM (HPMC AS) showing high swelling index of more than 70% due to presence of poly ethylene oxide WSR 1105 (Polyox, fig. 3). Most of the formulations were found to have good buoyancy properties as shown in Table 3. The capsules floated immediately and then the shells got dissolved within 3 min and further the immediate and extended release segments dropped down into the dissolution medium. Later on the immediate release tablets disintegrated rapidly with extended release tablets floating over the surface within a minute due to the effervescence because of the reaction between effersoda and 0.1 N HCl. (fig. 4). 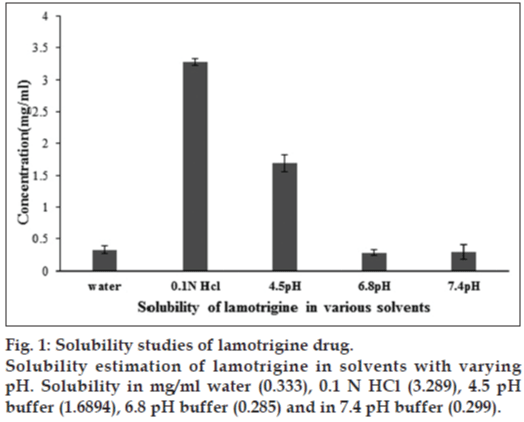 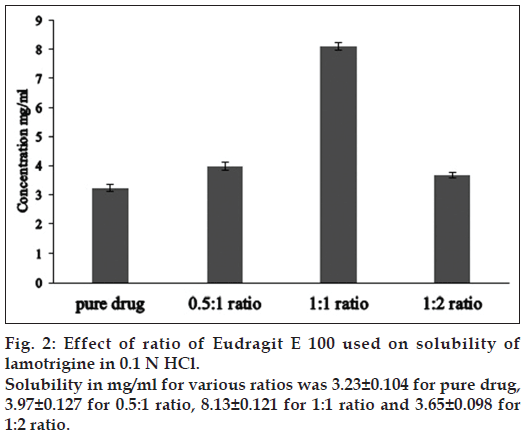 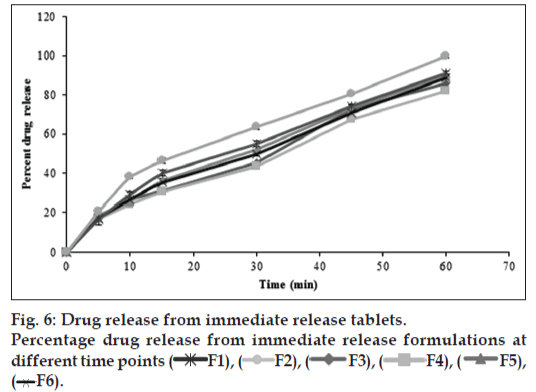 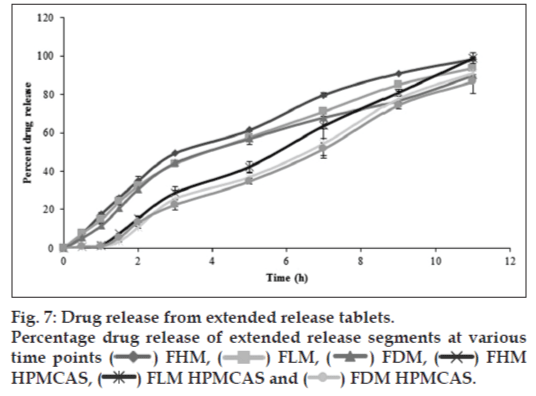 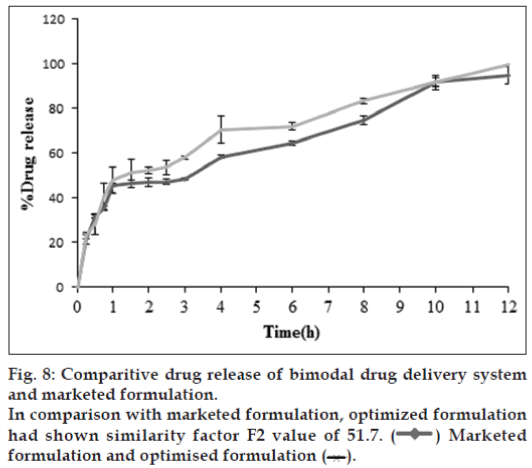 Selected formulation F2 (having F-Melt) has successfully released the drug within one hour and FHM (HPMC acetate succinate, hydrophillic matrix composing polyethylene oxide with 5% HPMC acetate succinate) showed a lag time of one hour and then extended its release up to 12th h with 99.59% drug release following zero order kinetics with R2 value of 0.989. The Korsmeyer-Peppas Eqn. showed the R2 value to be 0.941 and n value was 1.606 following non-Fickian diffusion patterns with supercase II relaxation mechanism. Here extended release tablet floated in 17 seconds and did float for a period of 18 h in vitro and for more than 8 h in vivo and released slowly from the matrix while floating. Drug release from bimodal drug delivery system when compared with marketed formulation (fig. 8) showed a similarity factor, F2 value of 51.7 indicating that the release profile of the bimodal drug delivery system is similar to that of the marketed formulation.

Bimodal gastroretentive drug delivery systems of lamotrigine were successfully developed. The optimized formulation, unlike conventional formulations seemed to be promising for improving the release as well as patient acceptance. The control of release could help in overcoming the toxic effects of unregulated levels of lamotrigine.