Wheat (Triticum aestivum L.) is one of the most important cereals in the world belonging to Graminaceae family; it has been an integral part of Indian culture for thousands of years and has been known to have outstanding healing properties[1]. It is one of the major staple food for nearly 35 % of the world’s population, grown in 102 countries, covers 220.69 million hectares of land, accounting about 32 % of the total cultivated land of the world[2]. Wheatgrass has a great therapeutic potential due to the presence of many biomolecules including chlorophyll, vitamin A, C, E and B complex, bio flavonoids, minerals (Calcium and Magnesium), iron and 17 amino acids including 8 essential ones[3]. Wheatgrass juice provides more energy by fulfilling nutritional deficiencies and removes wastes that clog cells, blood, tissues and organs[4] and it could be an effective alternative of blood transfusion in terminally ill cancer patients. Recently, the Indian researchers examined the reduction in blood transfusion requirement up to 40 % with no adverse effect in children with thalassemia, who consumed 100 ml of wheatgrass juice per day[5]. The Indian traditional folk and Ayurvedic medicine, reveals increase in hemoglobin levels in thalassaemic and myelodysplastic patients who use aqueous extract of 7-8 d old germinated wheat seeds[6-9].

Nanotechnology is referred as the term for fabrication, characterization, manipulation and application of structure by controlling shape and size at the nanoscale. It is emerging with its applications in science and technology for the purpose of manufacturing new materials. Nanoparticles could reach a biological target of interest by having a small size and offers a great possibility for biomedical applications, not only to deliver pharmaceutics, but also to be used as novel diagnostic and therapeutic approaches[10]. In recent years, many environment friendly methods have been employed for the synthesis of nanoparticles. The biological methods of silver nanoparticle synthesis using biological entities like bacteria[11], yeast[12], fungi[13] and plants[14] were reported. Over the past few decades, the use of plants in medicine and industry has been significantly growing in the world, although the potential of higher plants and crops as source for this purpose is still largely unexplored[15].

Candida is the most common opportunistic human fungal pathogen causing diseases ranging from superficial mucosal to life-threatening systemic infections[16-18] currently ranked by the Center for Disease Control as the third most commonly isolated bloodstream pathogen in hospitalized patients with a mortality rate of up to 50 %[19-21]. The availability of antifungal agents for the treatment of fungal infections is significantly lower with limitations related to their spectrum of activity and mode of action. Therefore, new and safer antifungal drugs are very much in need to combat the Candida infections. Silver ions have long been known to exert a strong inhibitory and bactericidal effect as well as possess a broad spectrum of antimicrobial activities[22]. The present studies have been conducted to understand the efficacy of silver nanoparticles (AgNPs) produced by aqueous wheatgrass extract against Candida species.

Collection and preparation of plant material:

Fresh leaves of 15 d old wheatgrass were collected from the local Rajapur area near horticulture centre, Kalaburagi, Karnataka, India. The fresh wheatgrass was washed in tap water for several times to remove the dust particles and shade dried for 4-5 d. The dried wheatgrass material was ground and sieved to form a powder. 10g of powder was boiled in 90 ml of double distilled water and filtered. The filtrate thus obtained was used as plant extract for the synthesis of AgNPs.

100 ml of 1mM of silver nitrate (AgNO3) solution was mixed with equal volumes of freshly prepared dry powdered aqueous wheatgrass extract (1:1) in 250 ml of Erlenmeyer flask and incubated for 24 h[23].

After 24 h of incubation, the solution was subjected to UV-visible spectrophotometer (BL Elico 200 Double beam Biospectrophotometer) and recorded the spectral peaks. The X-ray diffraction (XRD) spectroscopy (Rigaku-Ultima-IV) reveals the phase variety and grain size of silver nanoparticles. The Atomic force microscopy (AFM) was employed to study the size, shape, absorption, structure, dispersion and aggregation of nanomaterials. The chemical nature of silver nanoparticles was studied by Fourier transform infrared spectroscopy (FTIR) (NICOLET 6700). The purified and dried AgNPs mixed with Potassium bromide (KBr) to obtain a pellet and the spectrum was evaluated at 4000-400cm-1 using FTIR spectroscopy. The morphology of silver nanoparticles was studied using Scanning electron microscopy (Quanta 200 FEG SEM) and confirmed the presence of elemental silver in the solution by Energy dispersive X-ray (EDX) spectroscopy in conjunction with Scanning electron microscopy (SEM).

The silver nanoparticles synthesized by wheatgrass aqueous extract were tested for anti-candidal activity against five different clinical isolates of C. albicans MTCC3017, C. albicans MTCC1637, C. albicans MTCC183 C. tropicalis MTCC230 and C. glabrata MTCC3814 (Microbial type culture collection and gene bank, Chandighar, India) using agar well diffusion method[24]. A 20 ml of YPDA (Yeast extract-1 g, peptone-2 g, dextrose-2 g, agar-1.5/100 ml of distilled water) medium was poured into sterilized petri plates and freshly grown 24 h old Candida cultures were seeded on YPDA medium. The synthesized AgNPs solution was centrifuged at 15 000 rpm for 15 mins, obtained residue was collected and dried. About 10 mg/ ml of dried AgNPs was dissolved in 5 % of dimethyl sulphoxide (DMSO) was used as a test sample. The 5 mm diameter of 5 wells were prepared with the help of sterilized cork borer and wells were loaded with newly synthesized AgNPs (50 µl and 100 µl), fluconazole (10 mg/ml of 5 % DMSO) as positive control, DMSO and AgNO3 as a negative control. The plates were incubated at 28º for 24 h and examined for the zone of inhibition. The mean value for each organism was recorded and expressed in millimeter (mm)[23].

The MIC of synthesized silver nanoparticles was determined using the plate count method against five Candida species. 10 ml of 1 % YPG (Yeast extract-1 g, peptone-1 g, glucose-1 g/100 ml of distilled water) broth was inoculated with 105 cfu/ml of each Candida cell and cultured in shaking incubator at 28º for 24 h. The two fold diluted (2, 4, 8, 16, 32, 64, 128 and 256 µl/ml) AgNPs were mixed with 100 µl of 105 cfu/ml cultured medium, made the final volume 1ml by adding 1 % YPG broth and incubated at 28º for 24 h. After incubation the medium was spread on the petriplates containing 1 % YPG agar medium. The plates were incubated at 28º for 24 h and the numbers of colonies grown on the agar were counted[25]. 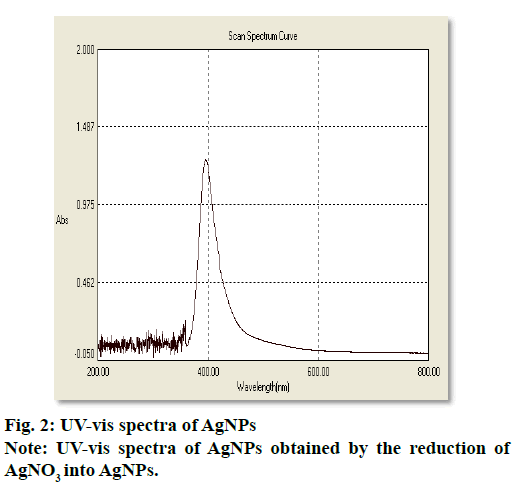 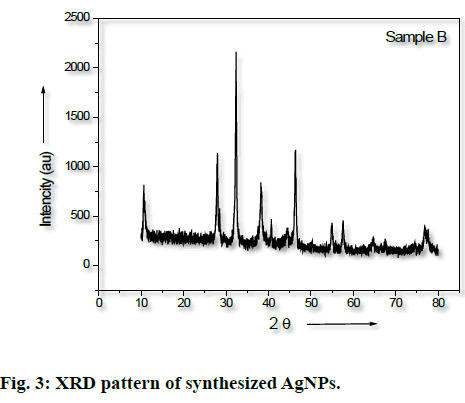 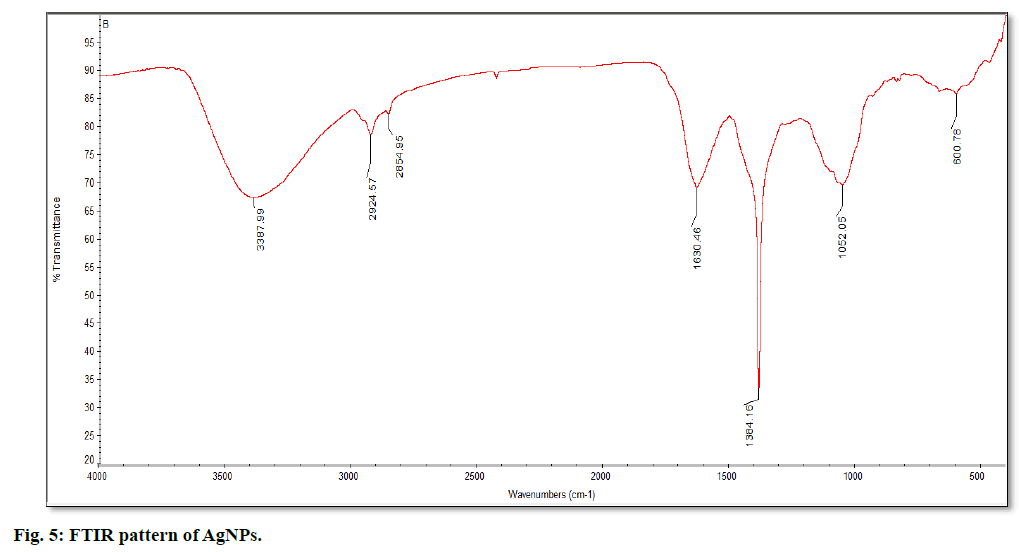 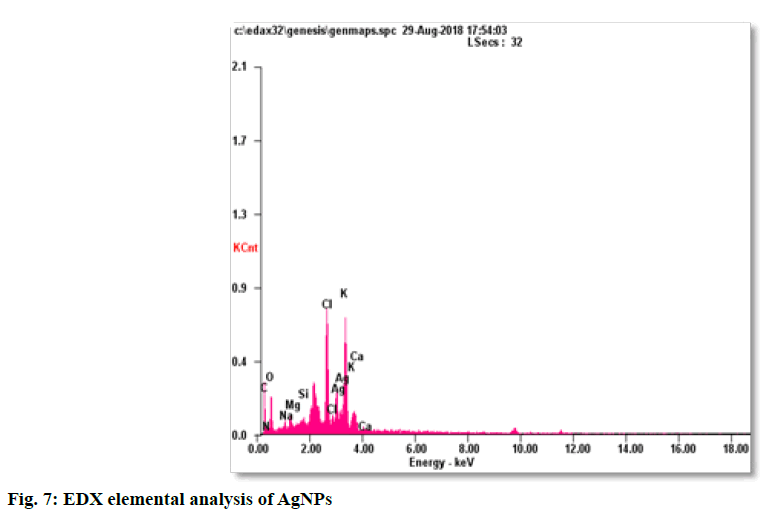 The anticandidal activity of silver nanoparticles carried out against five different strains of Candida using agar well diffusion method showed highest 15 mm zone of inhibition at 50 µl concentration against C. albicans MTCC1637 and found equal zone of inhibition by standard fluconazole indicates the similar efficacy of synthesized AgNPs whereas AgNO3 solution has shown least inhibitory activity against all tested Candida spp. compared with AgNPs. The Lowest 9 and 10 mm zone of inhibition was recorded against C. tropicalis MTCC230 and C. glabrata MTCC3814 respectively (Table 2). The low activity does not mean that the silver particles do not have any activity; probably it will show the activity with high concentration of AgNPs. Very little zone of inhibition (8 mm) was observed in standard fluconazole against C. albicans MTCC183 indicating the development of resistance against drug. However, the AgNPs showed better inhibition (13 mm) in C. albicans MTCC183 as compared to fluconazole. According to Jiaxin Gao et al. the C. albicans gains azole resistance by altering sphingolipid composition via genetic alternation of the drug target Erg11. The reason for easily acquired resistance to multiple antifungal drugs by Candida spp. remains unidentified. However, a wide genome genetic screening has been conducted in detail for fluconazole resistance[34]. The percent resistance acquired by Candida spp. against fluconazole was also reported by Berkow EL and Lockhart[35]. The wheatgrass AgNPs exhibited good anti-fungal activity against Candida spp (fig. 8). MIC of AgNPs performed by using two fold diluted concentration of AgNPs against five clinical isolates of Candida spp. to determine the minimum concentration that completely inhibit the visible growth of C. albicans MTCC3017, C. albicans MTCC1637, C. albicans MTCC183, C. tropicalis MTCC230 and C. glabrata MTCC3814. The MIC of AgNPs against tested organisms was found at 128 µg/ml against all test organisms except C. tropicalis MTCC230 (Table 3). A few Candida colonies were observed at 2, 4, 8, 16, 32 and 64 µg/ml concentration and there is no visible growth of Candida strains at 128 µg/ml. These results could be very much useful in designing the new anticandidal drug. The multiple applications of AgNPs in health care system have attracted the current researcher towards the synthesis, characterization and pharmacological properties of nanoparticels.

The authors are thankful to the Department of Physics Gulbarga University Kalaburagi, SAIF IIT Madras and Dr. Shreenivasa Nayaka, Karnataka University Dharwad for their support in carrying out XRD, SEM with EDAX, FTIR and AFM analysis respectively.