Metformin hydrochloride (MET), an oral antidiabetic drug belongs to biguanide class and is N, N-dimethyl imido-carbonimidic diamide hydrochloride[1]. It is the first-line drug of choice for the treatment of type 2 diabetes and acts by inhibiting hepatic glucose production, gluconeogenesis and increasing peripheral utilization of glucose. Alogliptin benzoate (ALO), a novel hypoglycemic drug and dipeptidyl-peptidase-4 inhibitor is 2-({6-[(3R)-3-aminopiperidin-1-yl]-3- methyl-2,4-dioxo-3,4-dihydropyrimidin-1(2H)-yl} methyl) benzo nitrile mono benzoate. It stimulates glucose-dependent insulin release[2]. Several high performance liquid chromatography (HPLC) methods have been reported individually and in combination for the estimation of MET and ALO[3-6] and with other drugs in bulk and plasma. Also literature reports a method for the simultaneous determination of MET and ALO in human plasma by reverse phase high performance liquid chromatography (RP-HPLC)[7]. The development of bioanalytical method employing a holistic quality by design (QbD) approach is gaining wide popularity. Based on the principles of sound science and quality risk management, QbD approach enables, enhanced understanding of the critical method parameters (CMPs) influencing the critical analytical attributes (CAAs) and ultimately the method performance. The design of experiment (DOE) is a systematic strategy constituting the integral elements of QbD by assisting in optimizing critical process parameters (CPP), while expending minimal resources of time, effort and cost[8]. Sample preparation is an integral part of optimization of bioanalytical method and various offline sample clean up procedures like protein precipitation (PP), liquid-liquid extraction (LLE) and solid-phase extraction (SPE) are most widely used. PP is simple and applicable to both hydrophilic and hydrophobic compounds, but the supernatant is relatively unclean since it still contains a significant amount of unprecipitated soluble plasma components that could affect chromatographic separation or suppress the ionization of the target analyte. SPE works with most compounds but suffers from having a complicated and time-consuming procedure, relatively poor reproducibility and is expensive. LLE is simple and the extracts are clean, but the recovery percentage of drug is less and it is generally unsuitable for the hydrophilic and thermolabile substances[9]. The studies were carried out to optimize the bioanalytical PP sample extraction method by Box–Behnken design (BBD) for obtaining maximum MET and ALO recovery from the biological matrix with superior method performance. Attempts, therefore, were made to develop and validate a rapid, sensitive, robust and economical bioanalytical HPLC method for the simultaneous estimation of MET and ALO in rat plasma using QbD-assisted systematic analytical approach.

Accurately weighed 10 mg of each drug was dissolved separately in methanol in 10 ml volumetric flask to obtain a standard stock solution of MET, ALO and TEN (1000 μg/ml) followed by storage at −20°. Further dilution was carried out for preparation of working standard solution of MET and ALO (100 μg/ml). Calibration standards (0.22-22 and 0.0012-0.12 μg/ml for MET and ALO) were further achieved by spiking working standard solution to drug free plasma in 2 ml graduated radioimmunoassay (RIA) vials. Additionally, three QC sample levels, namely, high, medium and low (1.5, 0.45 and 0.045 μg/ml for MET and 0.09, 0.024 and 0.0024 μg/ml for ALO) were prepared. All the solutions of calibration standards and QC level samples were further stored in a deep freezer at −20±2° until analysis.

Sample preparation technique plays a key role in optimization of bioanalytical estimations. In context to this, various preliminary trials were performed using SPE and PP method with the sole objective of enhancing extraction recovery of both drugs. The samples and standards were prepared as described above and extracted using Oasis® HLB cartridges by SPE technique. Briefly, the cartridge was activated by methanol followed by water. Further plasma spiked with drugs was passed and further washing with 2 % methanol followed by elution using methanol.

In PP method, on the basis of reported literature methanol, acetonitrile and combination of methanol and acetonitrile in different ratio (1:1, 1:2 and 2:1) were tried for the selection of the best extraction solvent. The extraction recovery of MET, ALO and TEN using different solvents was performed. The frozen samples were thawed in water bath at room temperature. The drug spiked thawed plasma (100 μl) was taken into pre-labeled RIA vial and further vortexed to ensure complete mixing of contents for 2 min. TEN solution (5 μg/ml) was added followed by 1000 μl of above mentioned extraction solvents. The mixture was finally vortexed for further 5 min to ensure uniform mixing. The vials were placed in refrigerated cooling centrifuge and centrifuged at 3000 rpm for 5 min at −20±2°. The supernatant was collected and filtered through 0.2 μm nylon membrane filter. 20 μl of the filtrate solution was further injected for determination by RP-HPLC.

Table 1: Factors and Levels for Bbd

The developed bioanalytical method was validated as per US Food and Drug Administration (FDA) guideline[10]. The linearity was established by construction of calibration curve in the range of 0.022-2.2 μg/ml for MET and 0.0012-0.12 μg/ml for ALO in the form of peak area ratio plotted against concentration. Moreover, homoscedasticity of data in terms of variance was evaluated by Bartlett’s test[11,12]. The sensitivity, in terms of lower limit of quantification (LLOQ) and limit of detection (LOD) was determined and expressed as percentage coefficient of variation (% CV). The selectivity at LLOQ was evaluated for extraction recovery from two different blank plasma lots. The accuracy and precision was determined at three QC levels for both the drugs by injecting five replicates and expressed in terms of % CV. Extraction recovery was performed at three QC levels before and after extraction in five replicates. Stability of MET and ALO under various storage conditions were investigated. Freeze thaw stability study was assessed at lower quality control (LQC) and higher quality control (HQC) level stored at −22° for 24 h and then thawed unassisted at room temperature. These freeze/ thaw cycle was repeated thrice. The short-term stability study was also determined at −22° for 12 h. In addition, the long-term stability study for a period of 30 d was evaluated at both levels stored at −22°. The results of stability study were compared against the freshly prepared QC samples[13].

The pharmacokinetic study was performed in accordance to the ethical guidelines of Committee for the Purpose of Control and Supervision of Experiment on Animals (CPCSEA) and the protocol was approved by the Institutional Animal Ethics Committee (IAEC) of Anand Pharmacy College, Anand, Gujarat, India (Protocol no. 1633). Rats were accommodated in plastic cages in a temperature controlled room (20°±2°) with a 12 h light/dark cycle. Female Wistar albino rats, 250±10 g, fasted overnight were used and had free access to water for at least 12 h. Rats were divided into three groups. The first group as control group, second group received pure MET (16.86 mg/kg, orally (p.o.) and ALO (0.41 mg/kg, p.o.) and third group received prepared bilayer tablet formulation at same dose[14,15]. After the administration, the blood samples (~500 μl) were collected from the retro orbital vein at 0, 1, 2, 4, 6, 8, 10 and 12 h in sodium citrate tubes. Further, these blood samples were subjected to centrifugation at 4000 rpm for 10 min, followed by storage of the frozen plasma at −20° until analyzed. All the samples were further analyzed by determination of both the drugs within 6-7 h of blood collection by the method as described earlier. The pharmacokinetic parameters, area under the plasma concentration vs. time curve after oral administration (area under the curve, (AUC)), area under the first moment curve (AUMC) to the last measured plasma concentration, peak plasma concentration (Cmax), time to reach maximum plasma concentration (tmax), elimination rate constant (Kel), terminal elimination half-life (t1/2), absorption rate constant (Kab) and absorption half-life (t1/2) were determined for pure drugs and prepared bilayer formulation of MET and ALO[16-18].

MET is a highly polar, basic compound with five nitrogen atoms in its structure. Hence, MET binds strongly leading to the poor recovery using cartridge and therefore it was not possible to extract it from biological fluids using an organic solvent or conventional SPE. Oasis® HLB cartridges are packed with a water wettable polymeric sorbent that allows greater flexibility in processing samples since it can dry out during the extraction procedure without diminishing its ability to retain analytes, thereby overcoming the drying out problem of the conventional silica based SPE cartridges[21]. Moreover, when MET was extracted using Oasis® HLB cartridge, it resulted in poor recovery of 5.0 % of MET but recovery of ALO and TEN was more, 69.75 and 75.23 % respectively.

For PP, percentage extraction recovery of MET (91.42 %) and ALO (80.90 %) from human plasma using methanol was higher as evident from results compared to acetonitrile and combined solvents[22]. Validation of bioanalytical method was carried out[25]. For both the drugs, linearity was obtained in the range of 0.022-2.2 μg/ml for MET and 0.0012-0.12 μg/ml for ALO with correlation coefficient of 0.9907 and 0.9918 respectively (Table 2). Furthermore, Bartlett’s test revealed that the response of peak area for MET and ALO showed homogenous variance exemplified by the calculated χ2 value less than the tabulated value. The sensitivity was measured in terms of LLOQ and mean percentage accuracy at LLOQ level was found to be 89.63±3.84 % for MET (0.022 μg/ml) and 88.50±1.92 % for ALO (0.0012 μg/ml). The selectivity was assured at LLOQ level where no other peak eluted at the retention times of MET (6.11 min), ALO (12.35 min) or TEN (13.45 min) in two different plasma lots (fig. 3). The accuracy determined at three QC levels and % CV was found to be less than 2.96 for MET and 2.67 for ALO confirming that the proposed method offers high accuracy. The precision measured in terms of % CV was found to be less than 1.76 for MET and 3.30 for ALO at three QC levels resulting in high precision (Table 3). Moreover, mean percent extraction recovery for both the drugs was 90.83 %-95.87 % for MET and 94.03-96.73 % for ALO. The freeze/thaw stability, short-term and long-term stability studies carried out at two concentration (LQC, HQC) levels revealed % CV less than 15 as per guidelines indicating stability of the both the drugs in plasma (Table 4).

Table 3: Accuracy, Precision and Extraction Recovery of Met and ALO by Proposed Method 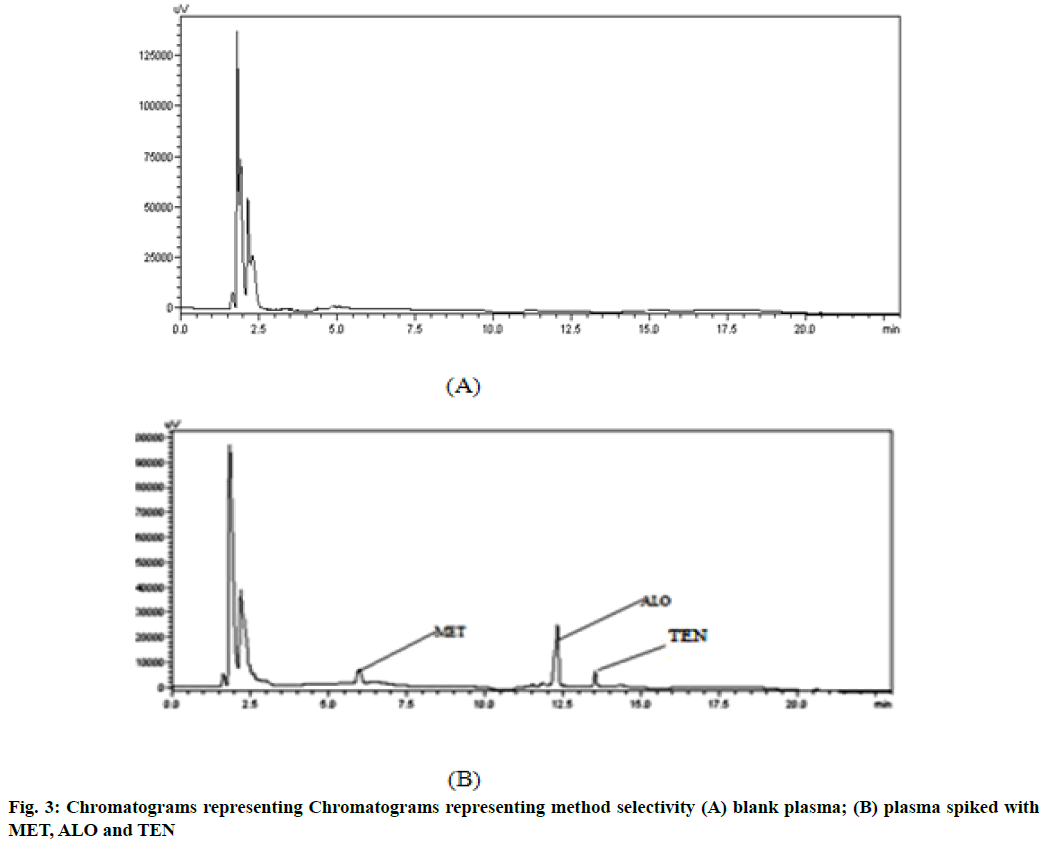 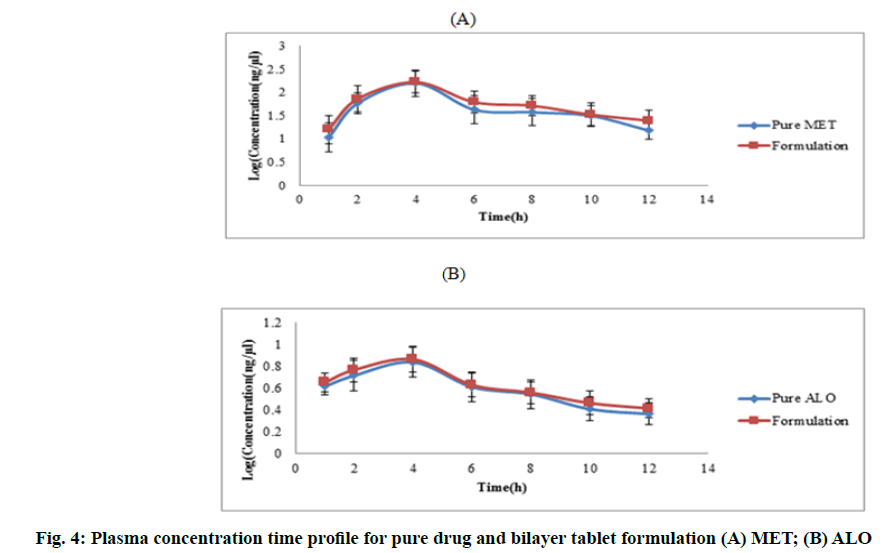 The proposed RP-HPLC method utilizes ion pairing reagent, 1-octane sulphonic acid for retaining MET on C18 column. The previous studies for simultanoeus estimation of MET and ALO in biological fluid, utilizes the sample preparation approaches like PP, LLE and SPE. While, the present research study proposed the development and application of a fast high throughput PP sample preparation method optimized by BBD for extraction of both the drugs from plasma with higher extraction recovery. Methanol was selected as the precipitating solvent owing to its polarity and gave high percent extraction recovery of both the drugs, 90.83 %-95.87 % for MET and 94.03-96.73 % for ALO from plasma respectively[27,28]. The application of BBD hence assured the robust and reliable PP extraction technique and reveals higher extraction recovery, no requirement of specialized apparatus with faster analysis as well as low cost. Moreover, this optimized bioanalytical method also assures greater quantitation capability with good linearity. Additionally, the proposed validated HPLC bioanalytical method applied to pharmacokinetic study revealed higher plasma concentration of prepared bilayer tablet confirming greater absorption compared to pure drugs. Hence, a novel sensitive RP-HPLC bioanalytical method for the simultaneous estimation of MET and ALO in plasma was developed using ion pair reagent and validated revealing its capability for application in bioanalysis of MET and ALO in biological fluid sample.