Diabetic Heart Attack (DHA), as a unique cardiovascular disease, is characterized by oxidative stress, inflammation, cardiac fibrosis and cardiomyocyte apoptosis induced myocardial relaxation and contraction dysfunction [1]. In the past few decades, the role of apoptosis in DHA has been widely concerned, that is, programmed cell death controlled by intrinsic genetic mechanism in the pathogenesis of DHA under certain physiological or pathological conditions [2,3].

Erythropoietin (EPO), a glycoprotein cytokine produced by mammalian kidney and liver, plays an important role in stimulating the proliferation, hemoglobin and maturation of immature erythrocytes in bone marrow hematopoietic microenvironment. Since 1989, recombinant human Erythropoietin (rhEPO) has been used in the treatment of anemia caused by various clinical reasons and it has been gradually found that rhEPO also has a variety of cell protective effects [4-6]. However, the long-term and high- dose application of rhEPO can affect the hematocrit in circulation and cause side effects such as hypertension and vascular embolism, so its clinical application has certain limitations [7].

Carbamylated Erythropoietin (CEPO) isacarbamoylated derivative of EPO. When the conformation and function of the protein are changed, CEPO with a molecular weight of about 40 kDa can be formed [8,9]. Although CEPO did not promote erythropoiesis, it retained a variety of cell protective functions of EPO [10,11]. CEPO can prevent the release of mitochondrial contents (such as reactive oxygen species and cytochrome c) by limiting the opening of mitochondrial permeability transition pore, thus reducing cell apoptosis [5].

In addition, CEPO can also affect cell signal transduction through Extracellular signal Regulated Kinase (ERK)- 1/2 pathway [12]. However, it is not clear whether CEPO can promote coronary neovascularization in DHA rats. In this study, we investigated the effect of CEPO treatment on coronary neovascularization induced by Streptozotocin (STZ) fed on a high-fat/ high carbohydrate diet in DHA rats and its underlying molecular mechanisms.

CEPO was synthesized as previously described by Khan, et al. In short, potassium cyanate is added to sodium borate containing rhEPO (1 mg/ml) and 500 μl (1 m) to produce a solution with a final concentration of 1 mol/l [13]. They were mixed and incubated at 37° for 1 d to form the reaction solution with in situ hybridization kit. Excess potassium cyanate was removed from the reaction solution by dialysis and then further concentrated by ultrafiltration (cut-off   membrane, 10 kDa). The protein concentration was measured by Coomassie brilliant blue staining and the absorbance was read at 335 nm.

A total of 100 healthy male Wistar rats from animal center of Zhongshan University were used to establish diabetic models. They were fed with high fat and high carbohydrate diet (66.6 % basic rat food, 20 % sucrose, 10 % lard, 3 % egg yolk and 0.4 % cholesterol) for 4 w and then intraperitoneally injected with STZ (50 mg/ kg). 1 w later, the same dose of STZ was injected again. According to the standard of fasting blood glucose concentration >18 mmol/l and lasting for 1 w. Finally, 80 rats with diabetes were identified and used in the following experiments.

Monitoring of hemodynamic parameters in rats:

After anesthetized rats by intraperitoneal injection of chloral hydrate, the right skin of the rat neck was cut, and the fascia, muscle and carotid sheath were separated layer by layer and the common carotid artery was separated by 1-1.2 cm. The common carotid artery was cut by ophthalmic scissors and the catheter was inserted about 1-1.5 cm. After 15 min, Blood Pressure (BP) and mean arterial pressure (map) were recorded. Then, Med lab-u/8C biological signal acquisition and processing system was applied to monitor the Left Ventricular Diastolic Pressure (LVDP), maximum rate of left ventricular pressure rise (dP/dtmax), Left Ventricular End Diastolic Pressure (LVEDP).

The infarct size was measured by 2,3,5-Triphenyltetrazolium chloride (TTC) staining. The left ventricle was rinsed with normal saline and wrapped with tin foil and stored in a refrigerator at 20°. 2-3 mm serial sections were made from the apex to the bottom of the heart in the direction perpendicular to the long axis of the heart to the level of the ligation line. The slices were placed in TTC dye solution and dyed in 37° incubator for 20 min and then put into 4 % formaldehyde solution for 15 min. White infarcted myocardial tissue and brick red viable myocardial tissue could be observed after taking out the tissue. Finally, the infarct area and non-infarct area were separated with scissors and the mass of infarct area was calculated by electronic balance.

The antigens (prostacyclin (PGI2), Endothelin 1 (ET- 1), angiotensin II (Ang II), von Willebrand Factor (vWF)) were diluted to 10 μg/ml with coated buffer and overnight at 4°. The next day, add 0.1 ml serum of rats in each group into the coated reaction pore and incubate at 37° for 1 h; 0.1 ml fresh diluted enzyme labeled second antibody was added and incubated at 37° for 30 min; then 0.1 ml tetramethylbenzidine (TMB) substrate solution was added and incubated at 37° for 10 min. Finally, add 0.05 ml 2 mol/l sulfuric acid to determine the Optical Density (OD value) at 450 nm wave length of ELISA detector. Meanwhile, the OD values of PGI2, ET-1, Ang II and vWF were determined and calculated in each group.

The Microvessel Density (MVD) was measured by immunohistochemistry:

In this study, vascular endothelium was labeled with CD34 and MVD was counted by immunohistochemistry. The infarct area was determined according to the existing studies [14]. 5 μm thick myocardial tissue was reserved at the junction of infarct area (gray white, wall thinning) and non-infarct area (pink). The frozen section (2 mm below the ligation line) was made in the sham operation group. The myocardium of each group was fixed, transparent, waxed, embedded, dewaxed and hydrated. After incubation overnight at 4°, each slice was incubated with 50 µl of ready to use maxvision reagent at room temperature for 15 min and then 100 µl of freshly prepared Diaminobenzidine (DAB) solution was added. Under the microscope, the number of endothelial cells or clusters of endothelial cells stained brown was counted as a blood vessel and the vessels in the lumen with more than 8 red blood cells and thicker muscular layer were not counted. Under the microscope of 400x visual field, 5 visual fields were randomly selected from each section to count the number of microvessels (MVC) in the infarct border area and the average value was obtained. MVC in each field was MVD.

The expression of Vascular Endothelial Growth Factor (VEGF) and Ang-1 was detected by immunohistochemistry:

Paraffin sections of myocardial tissue were routinely dewaxed, hydrated and high-pressure antigen repair, then diluted primary antibody (rabbit anti-VEGF 1:50, rabbit anti-rat Ang-1 antibody 1:100) was dropped at 37° for 2 h and washed with Phosphate Buffered Saline (PBS) three times. After that, the second antibody was incubated at room temperature for 15 min, washed with PBS for 3 times then dyed with DAB developer and hematoxylin. Taking the presence of brown particles in the cytoplasm or extracellular matrix of cardiac myocytes as the positive criterion, six visual fields were randomly selected under high power microscope (400 times) and their Integral Absorbance (IA) was counted respectively by automatic image analysis system and the numerical mean value was analyzed.

Statistical Package For The Social Sciences (SPSS) 22.0 software system was used in present study and expressed as data x±s. Analysis of Variance (ANOVA) was used to compare the data more than three groups and t test was used for pairwise comparison between two groups. p<0.05 was considered to be statistically significant. 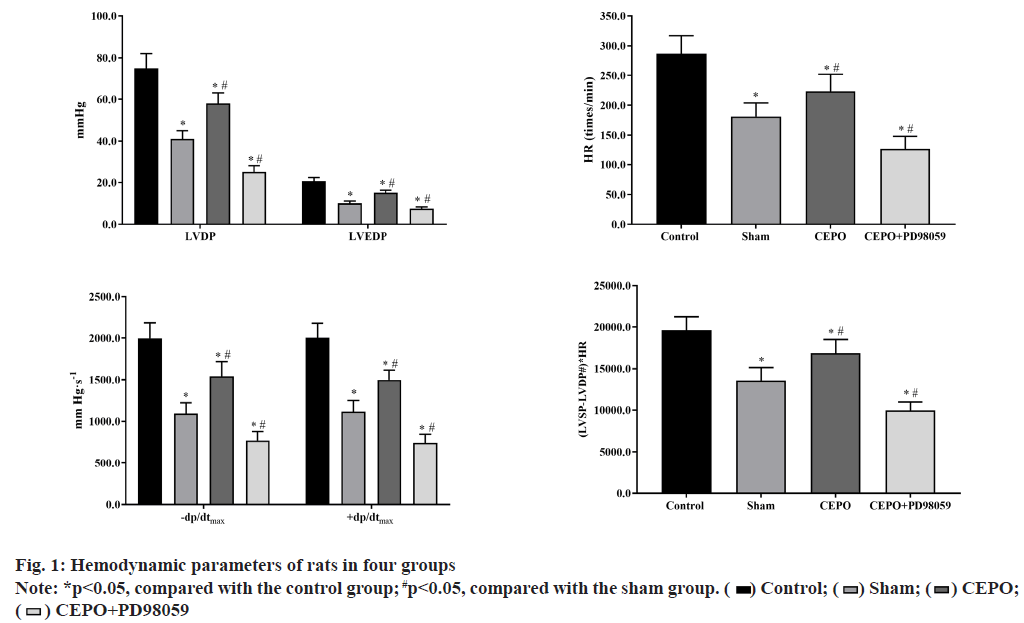 Diabetes, as one of the major diseases threatening human health, its complications are an important factor to reduce the prognosis of patients, among which cardiovascular and cerebrovascular   complications are the most common cause of death in patients with diabetes [4]. Although oral hypoglycemic drugs and insulin can greatly alleviate the patient's condition, there are still many side effects. Therefore, it is of great significance to formulate effective strategies for the prevention and treatment of diabetes. Diabetic cardiomyopathy is mainly caused by high blood glucose and coronary microcirculation hypoperfusion. In view of the fact that myocardial activity largely depends on the supply of microcirculation oxygen, nutrients and the transport of metabolites, restoring coronary microcirculation is an important way to improve myocardial activity [14-16].

ERK are a class of serine/threonine protein kinases, whose main function is to transmit mitogen signal transduction proteins [18,19]. ERK is the key to transmit signal from surface receptor to nucleus. Phosphorylated ERK l/2 is transferred from cytoplasm to nucleus, which mediates transcription activation of various cytokines, regulates cell proliferation and differentiation, cell morphology maintenance, cytoskeleton construction, cell apoptosis and cell malignant transformation and other biological processes. Hyperglycemia cannot only cause myocardial injury through the formation of advanced glycation end products, but also cause a variety of vascular complications by stimulating the proliferation of vascular smooth muscle [20], which can be attenuated by the activation of ERK signaling pathway. In diabetic rats with myocardial infarction, the activation of ERK cell signaling pathway is closely related to myocardial cell anti apoptosis [21]. The effect of hyperglycemia on ERK phosphorylation in cardiomyocytes is also time-dependent and short-term hyperglycemia can enhance ERK phosphorylation [22,23]. Recent studies have shown that CEPO can activate ERK cell signaling pathway to protect myocardium from ischemia/reperfusion injury [24,25]. In chronic hypoxia, CEPO may reduce the levels of PGI2, ET- 1, Ang II, vWF in peripheral serum to near normal level through ERK signal pathway [10]. In this study, we demonstrated that CEPO could protect myocardium against myocardial fibrosis and apoptosis by activating p-ERK signaling pathway.

Myocardial infarction can lead to hypoxia in body tissues and cause changes in local cytokine levels, induce the proliferation, migration, lumen formation and formation of new blood vessels of vascular endothelial cells with existing vessels, so as to adaptively increase blood supply and oxygen supply. During this process, abnormal secretion of cytokines, especially angiogenesis factor VEGF and basic fibroblast growth factor (bFGF), occurred. bFGF, a basic protein, has the effect of promoting cell mitosis and promoting angiogenesis. After binding with its specific receptor FGFR, bFGF can activate tyrosine kinase in vascular endothelial cells, thus activating PLCγ [6]. PLCγ is the most important member of the four phosphoinositol specific phospholipase C (PLC β, PLC γ, PLC δ and PLC ε), which are widely expressed in vascular endothelial cells. Phosphorylation is the key factor to regulate PLCγ activity. In the process of bFGF and other factors activating vascular endothelial cells, PLCγ can form receptor complex with FGFR2, further activate ERK1/2 signaling pathway protein downstream, start endothelial cell proliferation and generate neovascular endothelial cells. In this study, we found that CEPO can significantly promote bFGF induced phosphorylation of receptor and downstream cell signaling pathway proteins, which may be one of the mechanisms of CEPO promoting angiogenesis.

This work was supported by the foundation of Scientific Research Project of Wuhan Municipal Health and Family Planning Commission (No. WX16B13).