The composition of detectable small organic compounds in the ethanol extract of Achillea micrantha was defined by means of gas chromatography-mass spectrometric analysis. There were 71 low molecular weight organic compounds observed, two of which remained unidentified. The antibacterial activity of the extract was studied in respect to Escherichia coli, Staphylococcus aureus, Pseudomonas aeruginosa using the agar diffusion test and serial dilutions to define minimum inhibitory concentration. In order to compare the antibacterial activity of the herb and blossom truss extract of A. micrantha, the extracts of A. millefolium and A. leptophylla was used. In relation to the microorganisms tested, a significant inhibitory effect was observed with the aqueous alcoholic extract of A. micrantha at the minimum inhibitory concentration of 0.05 µg/ml.

The genus Achillea of compositae (Asteraceae) contains about 150 species. It vegetates mostly on the territory of Europe and Western Asia as well as in Australia, New Zealand and North America [1]. Different scientists managed to extract some chemical substances from the blossom truss and herb of yarrow, Achillea millefolium L., such as lactones, achillin, artillizin, grossmizin, michrantin, kaempferol 3-rhamnoside, campesterol [2,3], sesquiterpene lactones, sinthenin and micrantin [4,5], other various components of essential oils [6,7] and flavonoids [8].

The flavonoid content in the yarrow was considered to make antipyretic and haemostatic drugs [9]. In ethnomedicine, the herb and tips of flowering plants (anthodes) are used as a haemostatic agent in cases of internal haemorrhage, gastric disorders, external haemorrhage, inflammatory processes and metabolopathy [10-12]. There were reports of antioxidant activity of the extracts and essential oils of the plants sp. Achillea [13-15], as well as estrogenic [16], antiulcer [17,18], antitumoral [19], antisecretory (inhibiting intestinal motility) [20], immunomodulatory [21], fibrinogenic [22], antimicrobial [23-27], antifungal [28], and antiinflammatory [29,30] activities.

In traditional medicine, in contrast to A. micrantha Willd., the herb and blossom truss of A. millefolium, the chemical composition of which has been properly studied is mostly used. Nevertheless, literature reported that the antimicrobial effect of the extracts A. micrantha was much higher than that of A. millefolium [23]. The aim of this paper was to examine the chemical composition of the extracts of A. micrantha vegetative elements and blossom truss and their antibacterial activity in comparison with the extracts of other Achillea species.

In the second one, before the analysis started the preparation was 200-fold attenuated and transformed into hexane. The constitution of the compounds in the solution obtained was detected by means of the chromatomass spectrometer with quadrupole mass analyser. The column Thermo TR-5 ms SQC 15 м×0.25 mm phase ID 0.25 micron was applied. As the carrier gas helium was used. The mass spectra were tested in mode of scanning on mass full-scale range (30- 580 m/z) at a programmed temperature range (35°- 3 min, 2°/min to 60°-3 min, 2°/min to 80°-3 min, 4°/min to 120°-3 min, 5°/min to 150°-3 min, 15°/min to 240°- 10 min) with the subsequent step-by-step operation of chromatograms. The agents detected were identified with the help of mass spectral libraries (NIST-2005 and Wiley). For more precise identification the Kavats's retention index, obtained due to the use of the standards of alkanes C7-C30, was applied. The quantitative analysis was made through the internal standards, decafluorobenzophenone and benzophenone.

The blossom trusses, leaves and footstalks of A. micrantha were picked in the spring-summer period (May-June) of 2010-11 at blossom-time on the territory of Volga Sands, Astrakhan region, Russia. Species identification was carried visually and microscopically by examining the morphology of blossoms in trusses, leaves and other characteristic features of the plants, and defined them with the determiner at the Botany Department, Astrakhan State University. While determining the antibacterial activity of A. micrantha extracts, the known medical plants of Achilleа genus, A. millefolium, as well as A. leptophylla Bieb., growing in Astrakhan region were used for comparison.

The dried plant raw material (blossom trusses, leaves and footstalks) was extracted with 40 % aqueous solution of ethanol at an indoor temperature during 7 d while being constantly stirred. Then the extract was filtered, with the spirit evaporated, pasteurized in the dry-air sterilizer at a temperature of 85°. The final product was used to examine the antibacterial activity of the extract obtained. In the course of our pasteurization of extracts, some of the organic molecules could be destroyed due to the high temperature, and they were ultimately not taken into account in the analysis. However, this was done in order to obtain an extract completely free of microorganisms for further experiments.

In the study of compositional analysis of aqueous alcoholic extracts of A. micrantha vegetative elements (leaves and footstalks) through GC/MS, there were a large number of LMWOC related to different groups of chemical compounds (Tables 1 and 2). Here with, aldehydes, alcohols and hydrocarbons were found prevailing (Table 2). Out of 55 defined compounds, one remained unidentified (Figure 1). The concentration of two compounds (butane-1,3-diol and hexanal) was the highest. Their proportion was about 63 % from the total LMWOC concentration in the solution. Hexanal participates in regulation of different plant reactions, among them the formation of plant defence mechanisms from external damage and plant-feeders [31-33]. This compound has antifungal and antimicrobial properties [34]. The substantial part of all LMWOCs were aromatic compounds and benzene derivatives (Table 1). The most abundant of them are given in Figure 2. All these compounds are bioactive.

Table 1: Percent relative content of LMWOC in the aqueous ethanolic (40 % v/v) extract of vegetative parts of A. micrantha

Table 2: Percent Relative content of the main groups of substances in the Aqueous Ethanolic extract of Vegetative parts ofA. micrantha 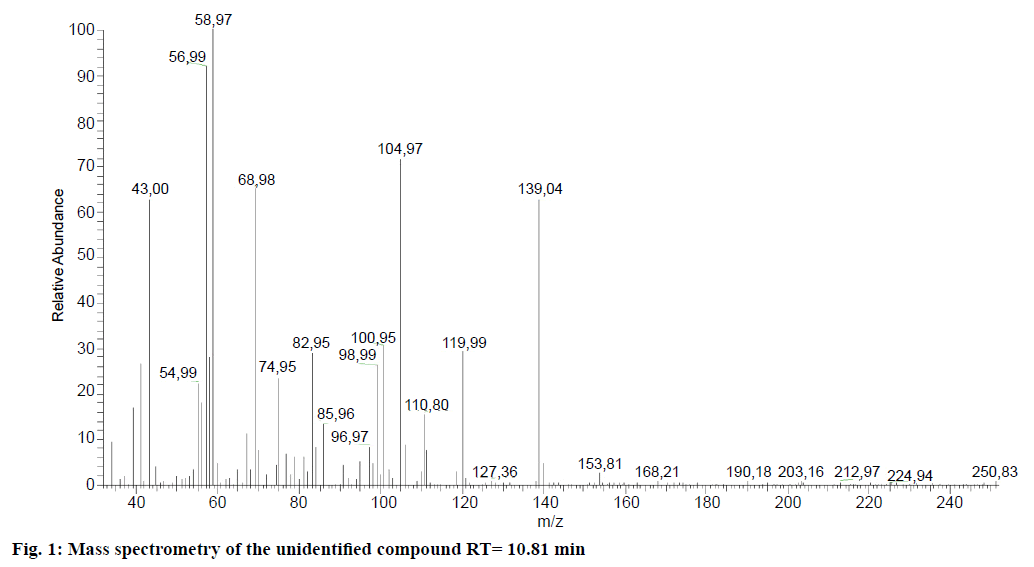 It is interesting to have found some compounds, naphthalene derivatives (compounds 29, 30, 32, 33, Table 1), the share of which is 2.75 % of the total concentration of LMWOC. Among LMWOCs of vegetative parts extract of A. micrantha, three compounds related to phthalates were identified (diisobutyl phthalate, dibutyl phthalate, diethylhexyl phthalate); herewith their total share was quite large (1.77 %). The given group of substances is often considered as pollutants. However, the recent findings have shown that actinomycetes, fungus and plants (terraneous and aquatic ones) are able to synthesize phthalates, which participate in allelopathic interacting and perform protective functions [35-39].

In ethanol extract of A. micrantha truss, 19 compounds were identified (Table 3). Out of the 19 compounds, identified in the truss extract of milfoil Parviflorus, 17 related to terpenes and their derivatives. This fact can be indicative of substantial antibacterial activity of this extract, as well as of vegetative parts extract where the proportion of terpenoids is also big, as the high antibacterial activity is intrinsic for terpenes and their derivatives [40-42].

Table 3: Percent Relative content of LMWOC in the Aqueous Ethanolic (40 % v/v) extract of Inflorescences of A. micrantha

The given chemical compounds, the majority of which refer to the group of biologically active terpenes and their derivatives were extracted with 40 % ethanol from the yarrow blossom trusses, were also the ones most commonly found in essential oils. The offered preparation method of extracting these compounds with the help of ethanol made it possible to obtain a complex of organic substances, which were the constituents of some essential oils with antimicrobial properties.

Table 4: The Comparative Antimicrobial Activity of the Plant Extracts by Agar Diffusion Test

Table 5: Minimum Inhibitory Concentration of the Plant Extracts in Terms of Staphylococcus aureus

As per the results of the study, the detected antimicrobial action of the extract A. micrantha, similar due to its activity to chemical specific antibiotic, is determined by the content of terpenic and phenolic compounds as its major constituents, and other detected in the course of study compounds.