Chronopharmacokinetics of puerarin in diabetic rats

Puerarin (7-hydroxy-3-(4-hydroxyphenyl)-1- benzopyran-4-one 8-(b-D-glucopyranoside)) is an abundant isoﬂavone glycoside extracted from the traditional Chinese medicine Puerariae Radix (PR, root of the Pueraria plant). It has been proved to effectively treat various diseases including cardiovascular, neurological and hyperglycemic disorders [1-3]. Its effects on diabetes have been supported by numerous medical studies [1,2]. Traditional Chinese medicine injection is an innovative and quick-acting formulation. A number of these injections have been played very important roles in clinical treatment of diabetes. The puerarin injection is a new formulation of puerarin. Recently it has been extensively used for clinic treatment of diabetes and resulting in a beneficial response in the treated patients.

The reference standard of puerarin and daidzein (internal standard) were purchased from the National Institute for the Control of Pharmaceutical and Biological Products, Beijing, China. Puerarin injection dosage was purchased from Baoji Jinsen Pharmaceutical Co., Ltd., Baoji, China. The glucose oxidase assay kit was supplied by Changchun Huili Biotech Co., Ltd., Jilin Province, China. Other chemicals were of analytical or HPLC grade and commercially available ultrapure water was used.

Male clean‑grade, diabetic Sprague‑Dawley rats (300‑350 g) were obtained from the Laboratory Animal Institute of Heilongjiang University of Chinese Medicine, Harbin, China. These rats were housed in a room with 12‑h light/dark cycles and fasted for 12 h before experiments. All animal experiments were conducted with the approval of the Animal Care and Use committee of Heilongjiang University of Chinese Medicine.

The rats were randomly divided into two groups and they were administrated with puerarin injection via vein. We chose 7:00 a.m. and 7:00 p.m. as the administration time to mimic the biological rhymes. Blood samples (500 μl) were collected into heparinized tubes via the orbital venous plexus before and after administration at 3, 5, 10, 20, 40, 50, 60, 80, and 100 min.

The diabetic rats in experimental groups were administrated with puerarin injection once a day for 5 consecutive days in the morning or evening. The blood samples were collected every day for blood glucose tests. These blood samples were centrifuged at 3000 rpm for 5 min to separate the plasma fraction. After that, the blood glucose levels were tested by automatic chemistry analyzer (Glamour 2000).

To isolate puerarin from plasma, liquid phase extraction was used. In our experiments, the biological agents were extracted via precipitating protein by acetonitrile. Then we removed non‑polar interfering impurities. Each blood sample was transferred right away to a heparinized microtube and centrifuged at 3000 rpm for 5 min. one hundred and fifty microliters of the separated plasma was spiked with the internal standard (daidzein) and 150 μl acetonitrile. After that the mixture was vortex‑mixed for 1 min and centrifuged at 3000 rpm for 5 min. Two hundred microliters of the supernatant was collected and then centrifuged at 12000 rpm for 5 min. Then 20 µl of the supernatant was injected into HPLC system for analysis.

The concentration of puerarin in biological samples was determined by HPLC (Shimadzu LC‑2010A). Chromatographic experiment was performed on a Diamonsil C18 reversed‑phase column (150×4.6 mm, 5 μm). The mobile phase was consisted of water and acetonitrile. They were filtered through a 0.45‑μm millipore ﬁlter and degassed prior to use. A gradient elution program was used, which is the proportion of acetonitrile increased from 5 to 55%, giving a total run time 22 min. We chose 250 nm as our experimental wavelength and set 0.8 ml/min as the flow rate with the column temperature set at 30°. The dosage volume was 20 μl each time.

Data from these samples were used to make concentration‑time profiles. The pharmacokinetic parameters were calculated by the DAS 2.0. Compartment model was discriminated according to the method of Akaike’s information criterion (AIC). All results were expressed as mean±SD. SPSS software was used to assess statistical significance and a P<0.05 was considered to be statistically significant.

Fig. 1 shows the curves of the mean value of plasma puerarin after the intravenous administration to the rats in the morning or evening. The plasma concentration of puerarin versus time data in diabetic rat best fits a two‑compartment open model for both the morning and the evening group. Although the plasma puerarin in both groups declines in a bi‑exponential fashion with time, we do find that the average plasma concentration in evening group is higher than that in morning group, most of them showing significant differences. 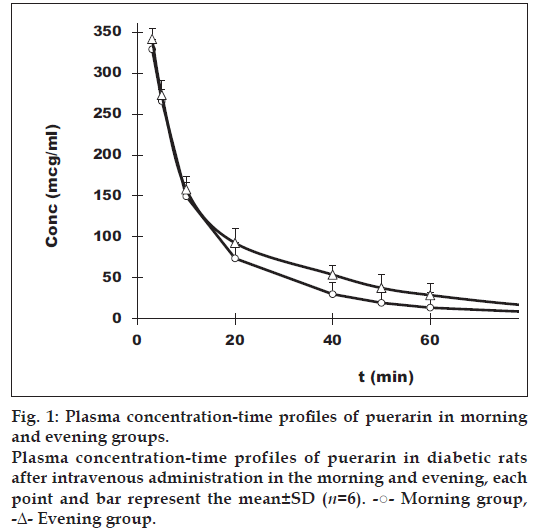 Pharmacokinetic parameters of the blood puerarin in the morning or evening group are shown in Table 1 with statistical analysis of the comparisons. After the administration of puerarin in the evening, we find that Vc is larger and CL smaller, accompanied by a lower t1/2α and a higher t1/2β. It means that puerarin is distributed faster and eliminated slower in diabetic rats of evening group. However, t1/2 does not show significant change, and that could be the reason for the higher plasma concentrations in evening group rats. And we also find that the AUC(0‑∞) is larger than that in the morning group.

Table 1: Pharmacokinetic parameters of puerarin in diabetic rats after intravenous administration in the morning and evening

Table 2: Blood glucose levels in diabetic rats of different groups before and after puerarin injection treatment

The average concentration of plasma puerarin in the evening group is higher than that in the morning group. There is a significant difference of plasma puerarin between these two groups. We get the same observation for some pharmacokinetic parameters, such as t1/2α, t1/2β, AUC(0‑∞) and CL. From our studies, we found that AUC(0‑∞) and t1/2α are the main kinetic parameters influenced by the administration time of puerarin injection (P<0.01). t1/2α is lower, and t1/2β is higher after injection of puerarin in the evening, which means that puerarin is distributed more rapidly and eliminated more slowly. However, t1/2 is not significantly changed, resulting in higher plasma concentrations in diabetic rats, so the AUC(0‑∞)is higher than the morning group. Our studies show that there are significant differences of the puerarin pharmacokinetics in diabetic rats between the morning and evening groups.

We also found that the concentration of puerarin in the evening group is higher and puerarin is distributed more rapidly and eliminated more slowly. Meanwhile, the pharmacodynamic studies indicate that the speed of onset is more rapid and the blood glucose levels decrease more significantly in the evening group. It suggests that puerarin injection as a treatment of diabetes might play better role in the evening than in the morning. The results suggest that there is a relationship between the rhythms and efficiency of the puerarin.

Circadian changes have already been found in cytochrome P450 level as well as in the activities of some medical metabolism enzymes, such as phase I and II [7‑9]. This fact could partially explain our observation of variations in the different groups. On the other hand, dose‑ and time‑dependent variation in medicine distribution and elimination cannot be explained only by circadian changes of enzyme activities, for circadian rhythmicity of blood ﬂow might play a role as well. Some studies on rats showed that blood flow to kidney, liver and intestine gets maximal level during the active phase and goes down to minimal level in the rest phase [10]. We found that the medicine distribution is faster at night during which time the corresponding medical enzymes are at active phase. The factors influencing the distribution could be the rhythms of blood flow to the organs, the binding ability of medicine to plasma proteins and or the membrane permeability to the medicine. Therefore, the circadian variations of plasma protein binding, medicine distribution and elimination, including rhythms of blood ﬂow to the organs and metabolism enzymes (CYP450) might be the mechanisms of the circadian variations in pharmacokinetics of puerarin. However, further studies on animals and human need to be done to determine the mechanisms of puerarin pharmacokinetics.

We would like to give thanks to the Postgraduate Innovate Scientific Research Foundation of Heilongjiang under Grant No. YJSCX2011‑458HLJ for their support.