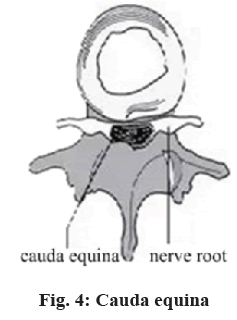 Chinese medicine therapy can achieve good therapeutic effect in treating lumbar intervertebral disc, which has been accepted and concerned by massive amount of patients. On this basis, this research observed and analyzed the therapeutic effect of combination therapy of Chinese medical massage and needle warming moxibustion.

148 patients with lumbar intervertebral disc who had been treated in our hospital from August 2015 to August 2016 were selected as research objects. All patients were applied with X-ray, computed tomography (CT), magnetic resonance imaging (MRI) examination and confirmed to meet some criteria of lumbar intervertebral disc, with major symptoms including sciatica (fig. 5), low back and leg pain. Meanwhile, those with heart, liver and kidney dysfunctions and hypertension were excluded. All patients and relatives enjoyed the right to know and signed informed consent forms. All patients were randomly divided into control group and research group, each containing 74 patients. Research group contained 28 female patients and 46 male patients, with age distribution from 32 to 76, averaging at 45.8±6.2 y old; control groups contained 30 female patients and 44 male patients, with age ranging from 30 to 75, averaging at 43.5±5.6 y old. Through comparing general data of both groups, there existed statistical significance, p>0.05.

Control group was applied with needle warming moxibustion therapy. Patients in control group were kept in lateral position and given with needle warming moxibustion therapy at corresponding acupoints (huantiao point, shenshu point, yaojia point, weizhong point, sanyinjiao point and yanglingquan point) according to actual condition of each patient[3]. Needle therapy was given once for 1/2 h (let patient feel warm), once a time and for 10 days, for the course of treatment[4].

Research group was given with combination therapy of Chinese medical massage and needle warming moxibustion. Patients in research group were kept in prone position and given with massage at waist, leg and hip area[5], once for 3 d and 10 d for a course of treatment.

As shown in Table 1, the overall treatment efficiency of research group is significantly higher than that of control group, p<0.05.

Table 1: Comparison of Overall Treatment Efficiencies of Both Groups [N, (%)]

Table 2: Comparison of Symptom Scores of Both Groups before and After Treatment (X̄±S)

As shown in Table 3, the JOA score improvement indexes of both groups are tested by independent sample t, with statistical significance, p<0.05. The improvement degree of JOA scores of research group is significantly higher than that of control group.

Table 3: Comparison of Improvement Conditions of Joa Scores of Both Groups (X̄±S)

As shown in Table 4, before treatment there is no significant difference of VAS scores between both groups, without statistical significance, p>0.05; after treatment, the VAS score of research group is significantly reduced, which is superior than that of control group, p<0.05.

Table 4: Comparison of Vas Scores of Both Groups (X̄±S)

In the perspective of traditional Chinese medicine, lumbar intervertebral disc belongs to a type of arthralgia, with typical symptoms of waist pain, lower limb radioactive numb and pain. The principle of treatment is to tonify qi, stimulate the menstrual flow and promote the circulation of blood. Acupuncture and moxibustion of traditional Chinese can make central pivot release substances to relieve pain as well as release opioid peptide to enhance immunity[8-10]. In addition, it can effectively improve perineural microcirculation, so as to prevent the conduction of nociceptive information and relieve myospasm. The principle of treating lumbar intervertebral disc by Chinese medical massage therapy is to reduce or eliminate the stimulation and compression of nucleus pulposus to nerve root, loosen the adhesion of nerve root, realize the reset or displacement of prolapsed nucleus pulposus and finally eliminate the sense of pain[11,12]. In addition, it can also conduct method of attack at vital point and massage to further improve therapeutic effect.

This research shows that the combination therapy of Chinese medical massage and needle warming moxibustion can achieve ideal therapeutic effect in treating lumbar intervertebral disc. Such combination therapy can significantly improve microcirculation at lesion area, not only relax the muscles and stimulate the blood circulation, but also relieve the pressured state of nerve root and achieve high overall treatment effective rate.

In conclusion, the combination therapy of Chinese medical massage and needle warming moxibustion can achieve more ideal therapeutic effect in treating lumbar intervertebral disc. On one hand, such combination therapy can significantly improve clinical symptoms and enhance patients living quality, on the other hand, it can help to eliminate inflammatory edema and thus effectively reduce sense of pain. Therefore, such combination method is worthy of being promoted in clinical application.