In medicine, senile dementia is known as Alzheimer’s disease, which is the first major disease of human neurodegeneration[1]. With the changes in China’s social and demographic structure, the aging degree is becoming more and more serious in China. The population of the elderly group has increased significantly. The onset age of Alzheimer’s disease is about 50-60 y old. Due to the above reasons, more and more people suffer from Alzheimer's disease in China every year. Alzheimer's disease not only seriously affects the physical and mental health of patients, but also brings a lot of troubles to patients and their families[2,3]. Therefore, it is urgent to study the therapeutic drugs and treatment schemes for Alzheimer's disease in China[4].

The subjects were divided into experimental group and control group. The experimental group was treated with compound brain peptide injection. The control group was given a placebo and did not limit the duration of the treatment. Efficacy and safety indexes were used to test the therapeutic effect of the subjects. Efficacy index refers to the questionnaire survey of patients in the experimental group after treatment. The internationally used UPDRS scoring scale for Alzheimer's disease was adopted to evaluate the severity of Alzheimer's disease. Safety indicators refer to the occurrence of adverse reactions during treatment.

In this study, existing medical databases were classified and summarized, as shown in Table 1. The search for keywords and topics was performed in the databases listed in Table 1. The key words include compound porcine cerebroside and ganglioside injection, Alzheimer's disease or AD.

In this research, the matching of literature titles with abstracts and contents was considered in the literature screening process, and the documents with higher matching were read in the next step. The screening of the adopted literature required two evaluators to determine whether it became the valid information, and if there was a disagreement, it was judged by a third person. The process of screening the literature by two reviewers was as follows: the literature was first evaluated by an evaluator, the main indicators of the evaluation were the efficacy index and the safety index, that is, the mean and standard deviation of UPDRS scores before and after treatment and the number of patients with adverse reactions. Then, another reviewer reviewed the selected literature. If there was a disagreement and still couldn’t reach a consensus after discussion, a third person was required to evaluate it. In case of literature data loss, ambiguity or expression problems in the selection of literature, the third party shall contact the author to verify the literature with data problems. This document was not used without the reply of the author.

The risk of bias criteria provided by the Cochrane Collaboration was used to evaluate the quality of methodologies included in RCT. The evaluation steps are summarized as shown in Table 2.

Table 2: Steps to evaluate the quality of the methodology included in RCT by the bias risk evaluation standard

Abnormal results were removed, and then metaanalysis was used again to compare the two results and determine whether the results were stable. If the reobtained results were not significantly different from the previous meta-analysis results and there was no significant change, it could be considered that the literature had a low sensitivity and good stability. If the reobtained results were significantly different from the meta-analysis results or even had the opposite results, the study was considered to be highly sensitive and not stable. Results with high sensitivity and poor stability should be treated with great care, and it should note or indicate the intervention effect and the factors influencing of the intervention effect, because the source of the intervention also needs to be further discussed and explored.

Fig. 1 is the flow chart of literature screening. It can be observed from fig. 1 that 176 relevant reports were searched according to keywords and themes. Among them, there were 76 English reports and 100 Chinese reports. By excluding the repeated reports and irrelevant reports of animal experiments, 126 articles remained. 18 non-randomized controlled trials and 100 irrelevant studies were further excluded, and the remaining 8 reports were included. In addition, 2 reports with randomized controlled trial, 1 article with different outcome indexes and 3 articles with undescribed blind method and different control group were excluded, and a total of 2 reports were finally included in the study. In the three included studies, a total of 120 cases were studied. In the 2 reports included in the study, a total of 120 cases were studied. The intervention measures of the experimental group were injection of compound cerebral peptide, and the control group was placebo treatment, which was taken for an unlimited time. The purpose of the 2 reports was to study the therapeutic effect of compound cerebral peptide injection on Alzheimer's disease, as well as the long-term safety and efficacy sustainability.

Statistics were made on the 2 included articles, as shown in Table 3. As can be observed from Table 3, the research objects of the two studies were 50 and 70, respectively. The ratio of male to female in study A was 1.57:1, the age range was 40-80 y old, and the average age was more than 60 y old. The ratio of male to female in study B was 1.63:1, with an age range of 45 to 85 y. The age of the cases in both studies was greater than 60 y old, and both were diagnosed as Alzheimer's disease for more than 5 mo. In addition, the subjects in the two studies included in the experiment group had received compound cerebral peptide injection, or the subjects received compound cerebral peptide injection for more than 1 y in the last treatment.

Table 3: Summary of basic characteristics of the included studies

In the inclusion study with the meta-analysis, the BRSD dementia behavior rating scale was used to conduct a statistical survey of patients who received compound brain peptide injection for Alzheimer's disease, and the scores of the motor function rating scale in the scale were compared.

Both included studies were randomized, double-blind, centrally controlled, and patients were followed up at 12 mo. In the included study, the experimental group was treated with compound brain peptide injection, the control group was given placebo for an unlimited period of time, and treatment methods other than injection of compound brain peptide and placebo were not used. The treatment duration was set at 16 w in Fischhof's[12] study and 22 w in Iwasaki's[13] study. The BRSD dementia behavior rating scale scores were then used to analyze the conditions in pre-treatment, midtreatment and post-treatment stages.

The meta-software was used to analyze the therapeutic effect of the experiment group and the control group, and the results were shown in fig. 2. According to fig. 2, the experiment group with compound cerebral peptide injection had significant statistical significance in the treatment of Alzheimer's disease. The two included studies indicated the mean and standard deviation of the BRSD dementia behavior rating scale 10 w after the treatment. In the two studies, the heterogeneity test P=0.46 and I2=0%, so there was no statistical significance between the two groups. By combining effect size with fixed effect model, it was concluded that MD=–5.41 and CI= [–5.96, –4.91], and the hypothesis result of overall effect was p<0.000001, so MD was statistically significant. Fig. 2 shows the number of subjects evaluated with the BRSD dementia behavior rating scale at different treatment stages. 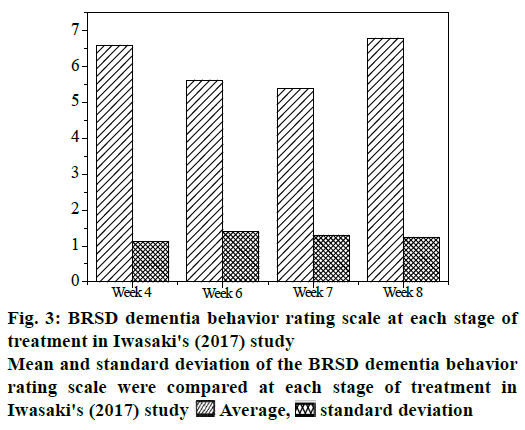 The results of the statistical F test showed that p≤0.0002, which meant that the differences in the mean scores of the BRSD dementia behavior rating scale at the 4th, 8th, 12th, and 16th w were statistically significant. The effect of compound brain peptide injection was better than that of placebo, and the motor function of compound brain peptide injection group was improved significantly.

The two included studies described the number of patients with Alzheimer's who had adverse reactions to the treatment with the compound peptide injection. According to the analysis, in the heterogeneity test of the two included studies, P=0.36 and I2=0%, and the heterogeneity test results showed that there was no statistical heterogeneity between the injection site and adverse reactions. Therefore, the fixed effect model was used to combine the effect size, and RR=3.14, 95 % CI=[1.94, 4.95]. The overall hypothesis results of the effect test were p<0.00001, indicating that the overall RR was statistically significant and the risk of adverse reactions at the injection site caused by compound peptide injection was statistically significant compared with that caused by placebo.

In the results of the meta-analysis, it was found that there was no significant heterogeneity in this study, and the overall difference of results could be obtained by combining the random fixed effect model, which indicated that the therapeutic effect and safety indicators were reliable.

In this research, the medical database was used to analyze the clinical effect of Alzheimer's disease. The results obtained have certain guiding significance for the clinical treatment of Alzheimer's disease. Therefore, based on the results of this study, more diseases can be combined with statistical methods, which will promote the development of medical and health care to some extent in the future.