In vitro dissolution test is an essential tool to assess the quality of herbal medicinal products in the solid dosage forms for oral use. Our work aimed to evaluate the dissolution behavior of Er-Zhi-Wan, in the formulations of water-honeyed pill and formula granule. Different media (water, 30% EtOH, 0.1 M HCl, acetate buffer, pH 4.5 and phosphate buffer, pH 6.8) were used following United States Pharmacopoeia and Chinese Pharmacopeia. An ultra-high performance liquid chromatography method was developed and validated to detect simultaneously six active ingredients for quantification and dissolution study (salidroside, specnuezhenide, nuezhenoside, luteolin, apigenin, oleanolic acid). As we observed, contents of main active ingredients were close in the two formulations for daily dose. In each medium, more ingredients dissolved from formula granule with higher Ymax and Ka. The mean dissolution time of the most ingredients in granule was significantly shorter than that in pill in acetate buffer, pH 4.5 and phosphate buffer, pH 6.8. Furthermore, salidroside, specnuezhenide and luteolin dissolved more than 80% in 30 min from formula granule, which indicated higher solubility along the intestinal tract according to biopharmaceutics classification system. The dissolution test developed and validated was adequate for its purposes and could be applied for quality control of herbal medicine. This work also can be used to provide necessary information on absorption for its biopharmaceutical properties.

Er−zhi−wan (EZW), as herbal medicinal products (HMPs), contains simply two medicinal herbs Fructus ligustri lucidi and Ecliptae herba[1,2]. It is used widely through self−medication in East Asia as a tonic agent for woman menopausal syndrome, osteoporosis and menstrual disorder. Recently, it was demonstrated that EZW could significantly induce the expression of luciferase driven by an estrogen responsive element in a pERE−Luc vector[3,4]. It also could prevent ovariectomy−induced bone loss, biomechanical reduction, deterioration of trabecular microarchitecture and increased S−Ca, S−P levels, decreased level of bone turnover markers and U−Ca, U−P levels in ovariectomized rats[5−7]. Iridoids, triterpenoid and flavonoid are major chemicals separated from EZW[8]. Salidroside, specnuezhenide, nuezhenoside, luteolin, apigenin and oleanolic acid are proved as the main ingredients which attribute to the clinical bioactivities[9,10].

Different formulations of EZW are available, including pill, granules and Erzhidan on Japan market. The water−honeyed pill and formula granule are the most popular dosage forms of EZW in China. Water−honeyed pill is a classical HMPs formulation, which is prepared and shaped by mixing powders or extracts of herbal materials with water and honey[2]. Formula granule is an innovative preparation of HMPs that imitates decoction with fast effects, which was recommended by the State Administration of Traditional Chinese Medicine since 1993. The aqueous extract of single herbal drug was granulated by following standard preparation protocol[11]. It is considered as the better pharmaceutical dosage form to imitate traditional decoction with higher compliance and convenience.

Dissolution plays an indispensable tool for pharmaceutical development, since they make it possible to check whether the formulation is suitable for its intended purpose. Guidelines for dissolution testing of oral dosage forms have been developed by the FDA and the FIP. Moreover, dissolution test can be used to detect quality deviation in parameters of HMPs[12,13]. The evaluation of the dissolution profile reveals the portion of HMPs that is actually available for absorption in the gastrointestinal tract and that will reach the circulation in terms of pharmacokinetics, absorption of a drug is controlled by its dissolution, so that different profiles indicate different bioavailabilities, which can lead to variation in the therapeutic effect[14,15]. However, no reports were found about the dissolution of EZW until now. In order to have a therapeutic effect, it is necessary for the oral dosage form to dissolve in the appropriate section of the digestive system.

Reference samples of salidroside, specnuezhenide, nuezhenoside, luteolin, apigenin and oleanolic acid weighing 6.65, 6.61, 4.63, 5.63, 4.44 and 12.50 mg, respectively were dissolved precisely in 10 ml methanol to make the stock solutions. A series of concentrations of mixed references were made by diluting with methanol and the samples were subjected to UPLC. Linearity was evaluated by linear regression analysis. 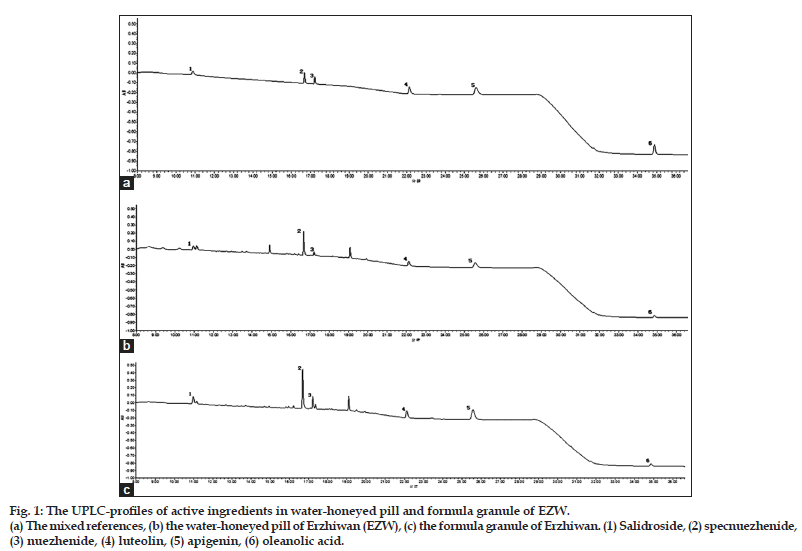 Samples of the two formulations for quantitative test were prepared. Appropriate amounts of water−honeyed pill were grinded into powders, and filtered by 100 mu (150 μm) filter according to Chinese Pharmacopoeia (ChP). The formula granule of Ligustri lucidi fructus and Ecliptae herba was mixed by a ratio of 1:1. The pill powders and the mixed granules were weighed accurately and ultrasonic extracted for 1.5 h with 150 ml 50% methanol, respectively. The extract solutions were concentrated under vacuum to dry. Finally, quantitative samples were prepared by adding 10 ml methanol accurately. Six samples of each formulation were subjected to UPLC. The contents of salidroside, specnuezhenide, nuezhenoside, luteolin, apigenin and oleanolic acid in water−honeyed pill and formula granule of Erzhiwan for daily dose were determined and calculated.

Dissolution testing of water−honeyed pill and formula granule of EZW

The dissolution of six active ingredients in the two formulations was determined by using apparatus 2 (paddle) by following ChP (2010 version) and United States Pharmacopoeia (USP) 30 (2007) guidelines. Briefly, 500 ml of different dissolution media (water; 30% EtOH; 0.1 M HCl; acetate buffer, pH 4.5 and phosphate buffer, pH 6.8) at 37±0.5° were used, and stirred with the paddle rotating at 75 rpm. 5 ml dissolution samples were withdrew manually at 15, 30, 45, 60, 90, 120, 180, 240 and 300 min and an equivalent volume of fresh medium was added to maintain the volume of the dissolution medium. The sample solutions were centrifuged at 10 000 rpm for 5 min. The supernatants were determined by UPLC. Each experiment was performed in six times.

Comparison of the dissolution profiles

The dissolution rate constant (ka), the maximum plateau (Ymax) and MDT of the active ingredients were calculated up to 120 min after the beginning of the test. The dissolution profiles of water−honeyed pill and formula granule of EZW were compared through a model independent method: The difference factor (f1) and the similarity factor (f2). The f1 factor measures the percent error between two curves over all time points. The percent error is zero when the test and drug reference profiles are identical and increases proportionally with the dissimilarity between the two dissolution profiles.

The f2 factor is a logarithmic transformation of the sum−squared error of differences between the test and the reference products over all time points. This factor is 100 when the test and reference profiles are identical and tends to 0 as the dissimilarity increases. Two dissolution profiles are declared similar if f1 is between 0 and 15 and if f2 is between 50 and 100[16,17].

The results of the validation of the UPLC method for dissolution test were showed in Table 1. The method was found to be selective, linear, precise, accurate and repetitive for the analysis of the ingredients in the two formulations under the dissolution conditions used. All the six active ingredients curves exhibited good linear regressions and the high correlation coefficient values indicated good correlations. The RSD of intraday precision of each ingredient was less than 1.1%. RSD of repeatability and stability of each ingredient from the two pharmaceutical forms in water and 30% EtOH were all less than 3.0 and 2.6%, respectively. The established UPLC method was adaptive for quantitative analysis and dissolution testing.

The contents of six ingredients in the pill and granule were determined by the established UPLC method. In the two formulations, the content of each ingredient for daily dose was close except oleanolic acid (Table 2). The content of oleanolic acid in pill was 19 times higher than that in granule. In addition, significant difference of contents was found in the same formulation. The content of specnuezhenide was 3971 and 531 times higher than that of apigenin in the granule and pill, respectively.

As shown in fig. 2, the dissolution behavior of the two formulations was quite different in each media. Apigenin was not detectable in all kinds of dissolution media as its low amount. More ingredients dissolved from granule than pill in each medium with higher dissolution percentage values and dissolution rate constants (Table 3). As shown in fig. 3, the MDT values of salidroside, specnuezhenide, nuezhenoside, luteolin and oleanolic acid in granule were significantly shorter than that in pill in acetate buffer, pH 4.5 and phosphate buffer, pH 6.8. The MDT indicates the time for the drug to dissolve for the cumulative dissolution process. The lower the MDT value, the faster the dissolution is[18]. Furthermore, it was notified that the content of specnuezhenide decreased significantly in 0.1 M HCl in 30 min. Its degradation rate was high (Ka=9×10−3 min−1) in strong acid environment for its poor stability, which was also reported by our group.

As per the BCS, a drug is highly soluble if it has rapid dissolution (over 80% in less than 30 min) along the intestinal tract. The comparison of the dissolution profiles indicated the differences between the formulations[19]. Typical acceptance criteria for the amount of drug dissolved are in the range of 70–80% dissolved. These criteria including test times are usually established on the basis of an evaluation of the dissolution profile data[20,21]. As shown in fig. 4, three ingredients from granule could reach a dissolution of 80% in 30 min in different media, but only one from pill. The differences between the formulations evaluated could provide necessary information to assess their bioavailability. Figure 3: MDT of active ingredients in water-honeyed pill and formula granule in ACE, pH 4.5 and PBS, pH 6.8. MDT of active ingredients in water-honeyed pill (left bar) and formula granule (right bar) in Ace, pH 4.5 (a) and PBS, pH 6.8 (b). MDT is mean dissolution time, Ace is acetate buffer and PBS is phosphate buffer solution. A1 salidroside, A2 specnuezhenide, A3 nuezhenoside, B1 specnuezhenide, B2 nuezhenoside, B3 luteolin, B4 oleanolic acid.

Table 3: The Dissolution Parameters Of Water -Honeyed Pill And Formula Granule Of Ezw.

Table 4: Comparison Of The Dissolution Profiles Of Water -Honeyed Pill And Formula Granule Through The Difference Factor (f1) And The Similarity Factor (f2)

The dissolution profiles were compared by using the difference factor (f1) and the similarity factor (f2) method (Table 4). Since the water−honeyed pill was the reference brand, the factors f1 and f2 were calculated between two formulations. Two dissolution profiles are declared similar if f1 is between 0 and 15, and if f2 is between 50 and 100. The results of f1 and f2 for the comparison of pill and granule indicated that the profile of each active ingredient in the two formulations had less similarity in the dissolution media tested.

The need for quality assurance, including confirmation of label strength, content uniformity and release properties, has long been recognized for drug products containing chemically defined, synthetically produced drugs. Dissolution testing is the traditional yardstick of release from the dosage form, and in recent years, the focus of dissolution testing on HMPs has moved increasingly to the prediction of bioavailability and bioequivalence. For these purposes, it is advantageous to simulate conditions in the gastrointestinal tract in the in vitro test. Up till now, biorelevant dissolution testing has been used primarily for oral products containing single, chemically defined active ingredients.