Comparison of Aerosol Formulations of Formoterol Fumarate and Budesonide

Inhalation route is been successfully used to treat asthma and chronic obstructive pulmonary disease (COPD) since active substances, such as beta agonists, anticholinergics, corticosteroids and mast cell inhibitors are delivered directly at the target cells in the lungs [1].

Formoterol fumarate (FF, (RS,SR)-N- [2-hydroxy- 5- [1-hydroxy-2- [1-(4-methoxyphenyl) propan-2- ylamino]ethyl] phenyl]formamide) also known as formoterol is a long-acting β2-agonist used in the management of asthma and/or chronic obstructive pulmonary disease (COPD) [2]. Budesonide (BUD, (16,17-(butylidenebis(oxy))-11,21-dihydroxy-(11-β,16- α)-pregna-1,4-diene-3,20-dione) is a glucocorticoid steroid for the treatment of asthma, non-infectious rhinitis (including hay fever and other allergies), and for treatment and prevention of nasal polyposis [3].

Dose availability from an inhalation device is a result of metering and dispensing in coordination with the patient’s inspiratory cycle. Thus, deposition of drug is not only affected by metering, but also by its simplicity of use and affability to the patient. Metered dose inhaler (MDI) is the widely used inhalation delivery system principally due to its portability, durability, reliability, shelf life, microbial robustness [4], cost effectiveness and ease of use especially in critical situations. However, despite these advantages, there are some weaknesses like variation in dosing dependent on shaking, priming, actuation time and canister content [5-7]. The move to replace CFC propellant with hydrofluroalkane (HFA), Geneva protocol (1989) provided opportunity for redevelopment of MDIs. HFA powered MDIs require intricate re-formulation and the use of new valve-types, actuators and mouthpieces [6].

MDIs are pressurised delivery systems which can be manufactured either in solution or suspension form. Formulation of MDI contains critical components like propellant, excipients viz, co-solvents and surfactants. The type of dosage form can influence stability and performance of MDI, where in an active pharmaceutical ingredient is either in the suspension or solution form. Solution formulations of metered dose inhalers of salbutamol sulphate and triamcinolone acetonide performed better and gave lower mass median aerodynamic diameter (MMAD) values as compared to their suspension formulation [8].

Vapour pressure and density of propellants are employed to assist in formulation. A higher vapor pressure usually results in a finer aerosol with a greater initial forward velocity causing a higher oropharyngeal deposition. This can result in an increased deposition to the whole lung, seen mainly in the central airways [9]. Smaller metering volumes may also give a finer aerosol with higher respirable fractions and more peripheral lung deposition. The particle size of pharmaceutical aerosols is the main factor governing their deposition in the human respiratory tract.

Inertial methods, which can mimic in vivo conditions, give the most representative results of aerosol performance [10]. They are the only methods available in the pharmacopoeia, which are accepted for particle size characterization for aerosols. Apparatus working on this principle have been included in the United State Pharmacopoeia (Apparatus 1), British Pharmacopoeia, (Apparatus D) and European Pharmacoepiea (Apparatus D). The present study aims at comparison of in-house developed MDI with marketed formulation by using Twin Stage Impinger (TSI) and Andersen Cascade Impactor (ACI).

In MDI I different excipients like surfactant, polymer and micronized drug were suspended in HFA 134a (Table 1) and filled in previously crimped 14 ml standard aluminium canisters by single stage filling process.

Table 1: Composition Of Mdi I Formulation

Homogeneity of the suspension was evaluated by visually inspecting formulation I when filled into glass bottles. Particle size distribution of MDI I formulation was determined by ocular microscopy. The canister was sprayed on clean glass slide. Particles were observed under 40X magnification, by using calibrated ocular micrometer and particles were measured as per IP 2007 [11]. Dose uniformity was determined over entire content (initial, middle and end actuations) as per the official method described in USP [12]. Both MDI formulations were characterized for in vitro pulmonary deposition by TSI and ACI. Stability of MDI I formulation was evaluated at 40o/75% RH for three months, wherein assay and fine particulate fraction (FPF) were determined at the end of every month.

The chromatographic system consisted of the following components from Jasco Corporation (Tokyo, Japan): A Jasco PU 2080 plus Intelligent HPLC pump solvent delivery system. A UV detector (UV 2075 plus) covering the range of 200–400 nm and interfaced to a computer for data acquisition and a recorder model Star 800 interface module. A rheodyne, with 50 ml loop injector. BDS Hypersil column C18 (150×4.6 mm, 5 mm) was used as stationary phase (Thermo Electron Corporation). The mobile phase consists of Acetonitrile and phosphate buffer pH 3.1 using gradient program given in Table 2. Flow rate was 1.5 ml/min. The column was maintained at 30º. Detector was programmed at 214 nm for detection of FF for 10 min and 247 nm for detection of BUD up to 30 min.

A is Phosphate buffer pH 3.1 containing 0.025M sodium dihydrogen orthophosphate dihydrate and B is acetonitrile

The impinger, fabricated as per specification given in IP 2007 [13] was attached to a vacuum pump that was set at a continuous air flow of 60±5 l/min. The upper stage of the impinger was filled with 7 ml of solvent and 30 ml were filled in the lower stage. First three deliveries of the MDIs were discharged to waste. After firing 10 puffs into the apparatus, throat and the impinger stages were rinsed with solvent. Two solutions were obtained: The first was from rinsing the throat and stage 1, second solution was from stage 2 of the impinger. Stage 1 washings included those from the throat and from the stage 1 inlet tube. Stage 2 washings included those from the inside and outside of the stage 2 inlet tube and the jet spacer. Total respirable fractions from both the MDI products were compared using student’s t test.

Andersen Cascade Impactor (Copley Scientific, UK) was assembled with glass fiber filter paper in place on filter stage. The ACI was attached to suitable vacuum pump, set at 28.3 l/min (±5%) flow rate. The procedure was performed as per the Indian pharmacopoeia 2007 guidance. The cutoff diameters for all the eight stages were: 9.0, 5.8, 4.7, 3.3, 2.1, 1.1, 0.7 and 0.4 mm, respectively. From the size distribution, a log-probability plot was constructed and characteristics of the aerosol determined, such as the amount of drug contained in particles less than 5 μm, the MMAD (i.e. the aerodynamic size of a particle, such that half of the drug is in larger and half in smaller particles), and the geometric standard deviation (GSD) a measure of the heterogeneity of the aerosol particle size, was determined by CITDAS software (Copley Scientific, UK) [14]. Mean recovery of FF and BUD from the two formulations was compared using a two-tailed t-test. Fig 1: Visual observation of MDI I formulation in glass vial. 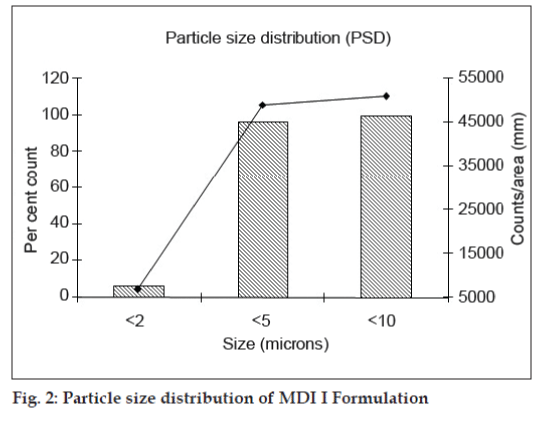 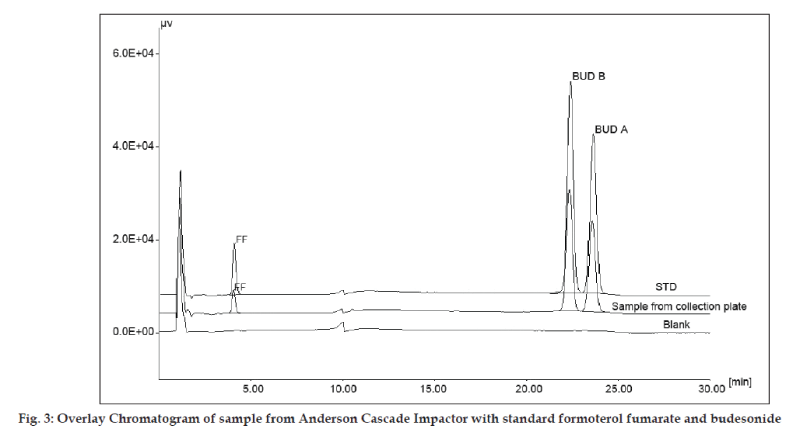 Results Of Aci Study For Budesonide

The study presents the comparison of in vitro lung deposition of two MDI formulations. TSI and Cascade impaction are an established in vitro method for the characterisation of pharmaceutical aerosols. Screening of MDI formulations using TSI and ACI equipment will not only assist the production of required regulatory data, but also improve the efficiency of pMDI formulation development.