Fluoroquinolones were introduced in the 1980s, with good antibacterial coverage, tolerability, high penetration in ocular tissue and delayed development of resistance. Fluoroquinolones are also used topically for ocular infections [1,2]. Moxifloxacin, a 4th generation fluoroquinolone, has broad-spectrum of coverage for both Gram-positive and Gram-negative bacteria. It acts by inhibiting DNA-gyrase enzymes which is necessary for bacterial DNA separation [3,4]. For the prevention of postoperative ocular infections prophylactic topical antibiotics are routinely used. Before selecting an antibiotic, its pharmacokinetic and pharmacodynamic properties should be considered. An agent with high intraocular tissue penetration, lower minimum inhibitory concentration (MIC) and broader spectrum should be chosen for higher efficacy [5]. Action of fluoroquinolones is concentration dependant [6]. In vitro MIC90 of moxifloxacin against common ocular isolates is 0.06 μg/ml for Staphylococcus aureus (methicillinsensitive) to 6 μg/ml for fluoroquinolone resistant strains; 0.125 μg/ml to 3 μg/ml for coagulasenegative Staphylococci; 0.13 μg/ml for Staphylococcus epidermidis; 0.19 μg/ml for Streptococcus pneumonia; 0.12 to 0.75 μg/ml for Pseudomonas aeroginosa; 0.12 to 2 μg/ml for Haemophilus influenzae [7,8]. Moxifloxacin formulation is preservative free and has better penetration over other fluoroquinolones. However, head to head studies evaluating comparative difference between single high dose versus multiple dose administration on its aqueous humour concentration are lacking. In the present study moxifloxacin levels were estimated after single time- high dose and multiple times instillation in the aqueous humourin rabbit eyes.

Albino rabbits (2-3 kg) were housed in standard laboratory conditions with diet and water available ad libitum. The study was approved by IAEC (Institutional Animal Experimentation Ethics Committee) and care of the animals was as per CPCSEA (Committee for the Purpose of Control and Supervision of Experiments on Animals), India guidelines for laboratory animal facilities. Moxifloxacin 0.5% ophthalmic solution was purchased from the market. All other reagents used in the experiments were of the highest grade available.

Twelve rabbits were divided into two groups and moxifloxacin administered topically. In group-1, two drops were administered thrice (total six drops) at 2 min intervals, in both the eyes. In group-2, moxifloxacin two drops three times a day for three days and 2 h before sample collection i.e. on fourth day, were administered in both the eyes. Rabbits were fasted 12 h prior to sample collection, but water was given ad libitum. Animals were pre-treated with atropine (0.1 mg/kg s.c.) and anesthetized with xylazine + ketamine (5 mg/kg + 50 mg/kg i.m.). Aqueous fluid was aspirated from the anterior chamber under aseptic conditions, using air cannula needle attached to a tuberculin syringe 2 h after the last instillation. The aspirate was immediately stored at −70º until estimation.

Moxifloxacin was dissolved in acetonitrile to make a working stock solution of 1.0 μg/ml. Aqueous humour (50 μl) was spiked with increasing known concentration of working stock solution to make moxifloxacin concentration of 20, 40, 80, 160, 320, 650, 1250, 2500 ng/ml. Standards were processed according to the sample preparation and analyzed by high-performance liquid chromatography (HPLC) as described below.

Aqueous humour was allowed to thaw before the start of the experiment. Fifty microlitres of rabbit aqueous humour was pipetted out and poured into a tube and 100 μl of acetonitrile was added. The samples were vortex mixed for 2 min and left for 30 min. Then this solution was filtered with a syringe filter 0.22 μm pore size. Of this filtered sample, 10 μl was directly injected into the HPLC.

Waters Acquity HPLC system was used to perform HPLC analysis, which is equipped with a binary solvent manager, an auto sampler, column manager composed of a pre-column heater and a photo-diode array detector. A volume of 5 μl was injected into the Waters Acquity BEH C18 (250×5 mm, 45 μm) HPLC column kept at 40° and the chromatographic separation was performed by gradient elution. A mixture of acetonitrile and 0.1% trifluoroacetic acid in water was used as mobile phase, with a flow rate of 1 ml/min. Chromatogram was performed at a wavelength of 296 nm and total run time for estimation was 20 min. Data handling, data acquisition and instrument control was done with the help of Empower Software v1.0®. 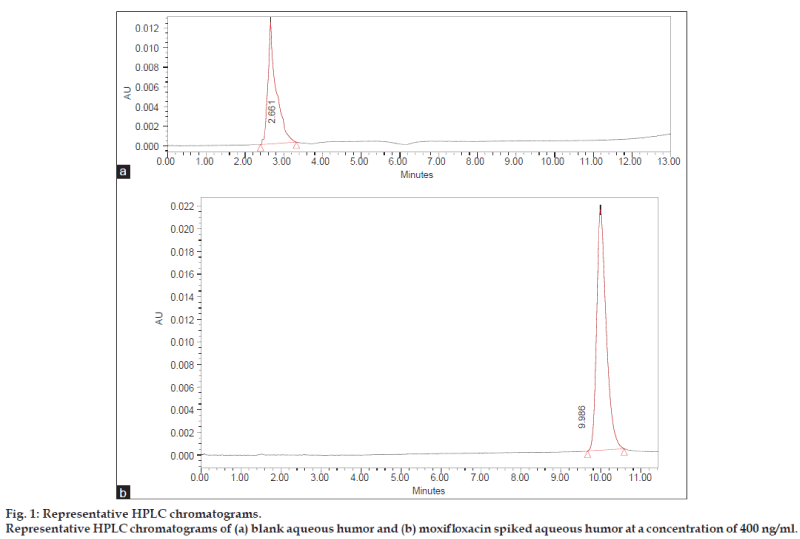 Antibiotics are administered preoperatively to prevent postoperative infection. Prophylactic flouroquinolones are widely used for the prevention of conjunctivitis and also for the treatment of ocular infections post surgery. Risk of keratitis is increased after ocular surgery. It has been shown that penetration of topical antibiotics is better in aqueous humour than systemic antibiotics [5]. Topical antibiotics can prevent blebs formation and reduce the incidence of keratitis in postoperative period. Topical use of antibiotics is associated with fewer side effects and there is reduced risk of resistance to antimicrobial drugs.

In an experimental study, Yagci et al. found that concentration of moxifloxacin in aqueous and vitreous humour topical administration in inflamed as well as normal eyes were significantly higher than other fluoroquinolones [11]. Concentration of moxifloxacin in aqueous humour in normal and inflamed eyes was 4.92 and 43.33 μg/ml, respectively. Thus, concentration in inflamed eyes was around 10 fold higher than normal eyes. This may be due to the loosening of tight junctions in ocular tissues during inflammation. Our results demonstrate that with multiple administrations, moxifloxacin accumulates in the aqueous humour and levels can be as high as shown in inflammatory conditions of the eye.

The choice of antibiotic depends on its spectrum of activity and penetration in ocular tissue to prevent intraocular infection. Moxifloxacin is a newer fourth generation flouroquinolones with wider spectrum of action and better penetration in aqueous humour and it is free of preservative. Many studies have shown that moxifloxacin reaches well above MIC90 of various pathogens in aqueous humour [11].

In the present study, the moxifloxacin level in both the regimens exceeded MIC for most of the bacteria. Level in multiple dose regimens is significantly higher than single instillation. On the basis of our data we recommend multiple instillation of moxifloxacin 0.5% topically two drops three times a day for 3 days and 2 h prior to ocular surgery to prevent anterior segment infection. In case it is not possible to follow multiple dosing regimens, a single high dose i.e. 2 drops repeated thrice at 2 min intervals is also suitable as it also exceeded MIC for most of the bacteria except ciprofloxacin-resistant gram-negative bacteria.

Therefore, we recommend use of multiple instillations of moxifloxacin 0.5% ophthalmic solution three drops 3 times a day for 3 days and 2 h prior to surgery.