Endometrial cancer is a primary epithelial malignant tumor in the endometrium. It is one of the three common malignant tumors in the female reproductive tract. Its clinical manifestations are mainly vaginal bleeding, pain in the lower abdomen and so on. In the late stage, there may be signs of enlargement of the uterus and occasional tumor tissue prolapse in the cervical canal[1]. In recent years, the incidence trend of endometrial cancer has increased significantly in the world. The number of new cases accounts for 3.9 % of female malignant tumors every year. Nearly 50% of newly diagnosed female reproductive system tumors in developed countries are endometrial cancer[2]. Its etiology and pathogenesis are not clear. According to its biological characteristics, it can be divided into endometrial and non-endometrial carcinoma. Non endometriosis carcinoma is highly malignant and incidence rate and easy to metastases, resulting in poor prognosis[3]. At present, the effect of surgery or chemotherapy is good in the treatment of endometrial cancer, but the prognosis of patients in the late stage is poor and some patients often have side effects and drug resistance at the same time of chemotherapy, which has become the main reason to affect the clinical effect. Curcumin is a chemical component extracted from the rhizome of Zingiberaceae, which has many pharmacological effects such as anti-inflammatory, lipid regulating, anti-infection, anti-tumor and anti-atherosclerosis[4]. In recent years, some scholars have found that curcumin can inhibit the proliferation of tumor cells by inducing apoptosis of tumor cells and its antitumor effect has become a research hotspot[5]. Therefore, this study further analyzes the mechanism of curcumin inhibiting the growth of cancer cells and inducing their apoptosis by cultivating Human Endometrial Cancer Cells (HEC-1B).

The HEC-1B was cultured on RPMI-1640 medium containing 10 % FBS at 37° and 5 % CO2. The fluid was changed every day. The logarithmic growth phase cells were selected for the experiment. All cells were divided into control group (curcumin concentration 0 mg/l), curcumin low, medium and high treatment group, the concentrations were 5 mg/l, 10 mg/l and 20 mg/l respectively and stored in refrigerator at -20° for standby.

Observation of cell morphology: Add curcumin of 5 mg/l, 10 mg/l and 20 mg/l respectively to the logarithmic growth HEC-1B cells for 24 h and observe the change of cell morphology after curcumin treatment for 72 h under inverted microscope. RPMI1640 culture medium was used as the blank control group.

MTT colorimetry to detect change of cell proliferation level: HEC-1B cells were inoculated on 96 well culture plate, cultured in 37°, 50 ml CO2 incubator for 24 h, 100 µl per well. Curcumin of different concentrations was added to the culture medium for 48 h, each group had 5 wells. MTT (5 g/l) was added to culture at 37° for 4 h before culture termination. The control group was non-drug intervention group and the blank control group was non-cell intervention group. After incubation, the supernatant was discarded and Dimethyl Sulfoxide (DMSO) 150 µl/well was added to each well. The purple crystal disappeared completely after the shaking of the flat rocker.

Changes of cell cycle: The HEC-1B cell lines were treated with curcumin 5 mg/l, 10 mg/l and 20 mg/l respectively. The cultured normal saline was used as the reference control group. After 48 h, the cells were collected to detect the changes of cell cycle by flow cytometry.

Changes of apoptosis level: The cells of curcumin 5 mg/l, 10 mg/l and 20 mg/l treated group and control group were taken and the apoptosis rate was detected by the attachment INV-Fluorescein Isothiocyanate (FITC) and Propidium Iodide (PI) double label flow cytometry.

Statistical Package for the Social Sciences (SPSS) 20.0 software package was used to analyze the data of this study, the mean±standard deviation (x±s) was used to measure the data, the single factor analysis of variance was used to compare the multiple groups, the χ2 test was used to count the data and p<0.05 was regarded as the difference with statistical significance. 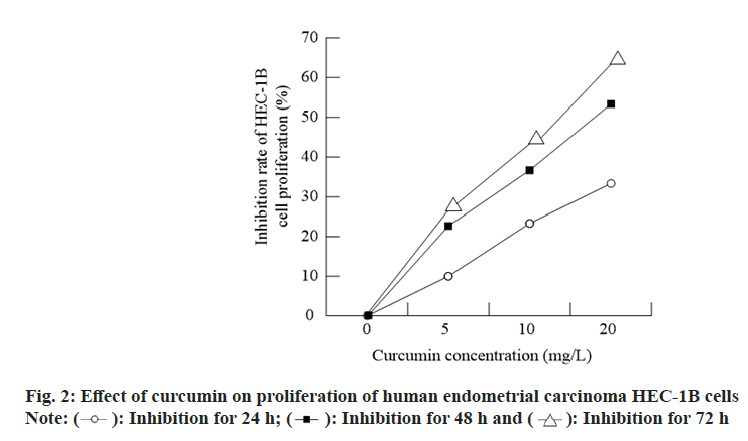 The apoptotic rate of HEC-1B cells treated with curcumin 5 mg/l, 10 mg/l and 20 mg/l increased gradually and with the increase of drug concentration. The apoptosis rate increased sequentially (p<0.05; Table 2).

Table 2: The Effect of Curcumin on Multiple Side Effects and Drug-Resistant Apoptosis in Human Endometrial Carcinoma (x±s)

After curcumin 5 mg/l, 10 mg/l and 20 mg/l treated HEC-1B cells, compared with the control group, the level of apoptotic factor Livin protein was significantly decreased in each group and the protein level of caspase-3 was significantly higher (p<0.05). The levels of Livin protein and caspase-3 protein were dose-dependent with curcumin concentration as shown in Table 3.

Table 3: Expression of Livin and Caspase-3 by Western Blot

The incidence of endometrial cancer is increasing year by year and it is also a common gynecological malignant tumor. The number of deaths per year accounts for 1.7 % of female malignant tumors. In some countries, the incidence is higher than cervical cancer and the 5 y survival rate is 67%[6]. Its pathogenesis is not yet clear. Clinically, hypertension, obesity and diabetes are generally considered to be triads of endometrial cancer. Because the three may be the result of hypothalamic, pituitary, adrenal dysfunction or metabolic abnormalities, abnormalities of the gonadotropic function of pituitary can make the ovary unable to secrete progesterone and lose ovulation function. In addition, obesity itself is easily accompanied by luteal progesterone secretion insufficiency and irregular menstrual cycle, which increases the risk of endometrial cancer[7,8]. In recent years, studies have shown that[9], the occurrence and development of malignant tumors are closely related to the abnormal expression of cytokines and the relationship between apoptosis and tumors has attracted much attention. Livin is a member of the apoptosis suppressor protein family. It is highly expressed in breast cancer, colon cancer, prostate cancer and other tumors. Livin expression has obvious tissue specificity. It can play an anti-apoptosis role by combining with caspase family[10]. Caspase-3 is a key protease in caspase family, which carries out apoptosis and induces apoptosis after activation. Its main function is to be activated by apoptosis pathway and inhibit tumor cell apoptosis[11].

Curcumin is the main component of turmeric. It has stable color and low toxicity. It is widely used in food coloring agents. In recent years, its anti- inflammatory, anti-coagulation, anti-rheumatic, especially anti-tumor effects have attracted clinical attention. It is considered by oncologists as a potential 3rd generation anti-cancer drug, which has the advantages of broad anti-cancer spectrum and small side effects[12,13]. Studies have shown that curcumin can produce anti-tumor effects through multiple pathways, can inhibit the proliferation of colon cancer and liver cancer and can significantly reduce the number of tumor cells and the size of the tumor. At present, chemotherapy is an effective method to treat endometrial cancer, but because patients are prone to toxic side effects and drug resistance, the therapeutic effect is quite different from people’s expectation[14]. Curcumin can not only enhance the killing effect of chemotherapy drugs on tumor cells, but also reduce the incidence of adverse reactions and drug resistance[15]. In this study, the effects of curcumin on the proliferation and inhibition of HEC-1B cell line were observed by MTT and flow cytometry. The results showed that the proliferation of HEC-1B cell line treated with curcumin at different concentrations for 24, 48 and 72 h was significantly inhibited compared with the control group (p<0.05). It was found that the ratio of G0/G1 and G2/M of HEC-1B cells treated with curcumin at different concentrations was significantly lower than that of the control group and the ratio of G2/M phase was significantly higher than that of the control group. Further detection of the apoptosis rate showed that the apoptosis rate of HEC-1B cells treated with curcumin at different concentrations increased gradually and with the increase of drug concentration, the apoptosis rate increased from the normal 6.53 %±0.27 % to 40.72 %±1.98 % (p<0.05). It is suggested that curcumin can inhibit the growth of HEC-1B and inhibit its apoptosis by inducing cell cycle arrest. In order to further explore the mechanism of curcumin, this study used Western blot to detect the expression of apoptotic factors Livin and caspase-3 protein. Compared with the control group, the level of apoptotic factor Livin protein in each treatment group of curcumin was significantly reduced and caspase-3 protein levels increased significantly (p<0.05), so this study speculates that the changes in Livin and caspase-3 protein levels may be closely related to their induction of apoptosis. There have already been reports of the biological effects of turmeric[16-22].

Apoptosis is a type of cell death or cell death during the process of programmed cell death that occurs in extracellular organisms[23-26]. The mechanism of programmed cell death of binuclear cells that occurs following intracellular mechanisms, especially fragmentation of cells, is called apoptosis or programmed cell death[27-29]. Apoptosis is a physiological and biological process for active and natural development as well as maintaining homeostasis. In cases where the survival of a cell endangers the existence of a living organism, the cell commits suicide with programmed death. When a cell is exposed to various environmental or even internal factors such as ionizing radiation, cell-killing drugs (in the treatment of cancers), hyperthermia, glucocorticoid hormones, etc., its structure, including deoxyribonucleic acid, undergoes changes that can lead to its survival if left unchecked. Severe, including cell cancer other factors such as some intracellular pathogenic bacteria such as Salmonella, Shigella, Listeria, Legionella, etc., can also be effective in directing cells to this particular type of death by altering their infectivity by modifying certain intracellular metabolic and biochemical pathways[30-34]. This study still has certain limitations. Although the effect of curcumin on HEC-1B has been clarified, the specific mechanism is still unclear. The differential expression of related genes should be clarified by high-throughput sequencing and the corresponding pathways should be studied in more detail. Furthermore, this study only did relevant research at the cellular level and the next step is to clarify the role of curcumin in tumor-bearing mice.

In conclusion, curcumin has obvious inhibitory effect on HEC-1B and can induce cell cycle arrest, promote apoptosis, which is concentration dependent. The related reason may be through inhibiting Livin protein expression and increasing caspase-3 protein level. 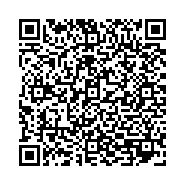