In majority of individuals blood pressure rises in the early morning hours, which lead to serious cardiovascular complications. Formulation of pulsatile system makes it possible to deliver drug at definite period of time when symptoms of the disease condition are most critical. The purpose of the present work was to develop pulsatile release tablet of losartan potassium for chronotherapy in hypertension. The prepared system consisted of a core tablet coated with versatile and safe hydrophilic cellulosic ethers such as, hydroxypropyl methylcellulose, hydroxypropyl cellulose and sodium carboxy methylcellulose to produce burst release after predetermined lag time. Various formulation factors were studied through series of test and in vitro dissolution study. It was found that core tablets containing superdisintegrant failed to produce burst drug release pattern while effervescent agent was able to do so. Results also reveal that coating composition and coating level affects lag time. Formulation containing effervescent agent in core and coated with 200 mg hydroxypropyl cellulose provide lag time of 4.5 h with 73% drug release in 6 h that followed a sigmoidal release pattern. These values were close to the desired objective of producing lag time of 5â??6 h followed by fast drug release. This approach can thus provide a useful means for timed release of losartan and is helpful for patients with morning surge.

Over the last 30 years, numerous technical advancements has occurred in formulations, biodegradable polymers, and the understanding of pharmacokinetics has resulted in new techniques of drug delivery. Apart from the controlled, sustained, prolonged and targeted delivery systems, a new delivery system known as pulsatile delivery system has drawn attention of scientists, which is based on the concept of chronotherapeutics [1]. A pulsatile drug delivery system is one that delivers drug molecule in rapid and transient manner within a short time period immediately after a predetermined off release period [2]. The rationale for use of proposed system is to deliver drug at a time when disease condition is in the most morbid and mortal state during 24 h. Particular rhythm in onset and extent of symptoms were observed in diseases such as, bronchial asthma, rheumatic disease, ulcer, cancer, diabetes, attention deficit syndrome, hypercholesterolemia, neurological disorder, myocardial infarction, angina pectoris and hypertension [3]. Several pulsed release formulations have been developed recently, wherein tablets or capsules are the basis of pulsatile formulation that addresses emerging chronotherapeutic requirements [4].

In cardiovascular diseases the focus is to optimally deliver the antihypertensive or antianginal drug in higher amounts in early morning and lower amount at night. Holter monitoring of the electrical properties of the heart has revealed 24 h variation in the occurrence of ventricular premature beats with the peak in events, in diurnally active persons, between 6 a.m. and noon. The main sources of such a time?dependency in cardiovascular physiology and pathophysiology are the external interfering stimuli, primarily physical and mental activity or stress, sleep–wake cycle, and the endogenous rhythmicity [5]. Drugs that are capable of reducing the morning increase in norepinephrine and angiotensin II, have a more cardio protective effect and a better blood pressure (BP) lowering effect [6]. Day?night patterns have been documented for BP, arrhythmias, angina, myocardial infarction, and stroke, among other cardiovascular maladies. Risk of ischemic events is highest during the first few hours of the daily activity span and lowest during sleep [7].

The renin angiotensin–aldosterone system is activated in the morning. Hence blood pressure rises rapidly in the morning, the so?called morning surge, and that this rise has been associated with increased risk of cardiovascular events such as stroke and myocardial infarction [8].

Losartan potassium is an angiotensin antagonist, which has been reported to lower the blood pressure without disrupting the diurnal variation in hypertensive patients. However, no effort has been made to develop a system for angiotensin antagonist that deliver drug at a specified time and show maximum effect at time when needed most. Hence, an attempt was made to formulate pulsatile drug delivery system of losartan potassium which can deliver the drug after lag time of 5?6 h. The system consisted of fast dissolving core tablet coated with various hydrophilic cellulosic polymer. The effect of various parameters like type and weight of coating polymer, and excipients used in core tablet affects desired results and this was investigated.

Three types of granules were prepared by using three different polymers i.e. sodium carboxymethyl cellulose (NaCMC), HPMC K4M, and HPMC E50. Granules were formed by simple mixing of polymer with 5% w/v alcoholic solution of polyvinyl pyrollidone K30 to form dough. The formed dough was passed through sieve, dried and resieved through sieve no. 20. Finally mixed with talc and magnesium stearate. In addition to above polymers hydroxypropyl cellulose was directly used (without granulation) for compression coating because of its directly compressible character.

Two hundred milligrams of prepared granules was used for shell formation in each tablet. Press coating of tablet was performed. Half the amount of powder from 200 mg was filled into the die to form a powder bed. In centre core, tablet formulation is placed. Over this remaining half of the granules was filled into die and contents were compressed using concave punches of 10 mm diameter. Hardness of tablet was maintained between 6?8 kg. Various Batches of coated tablet is given in Table 1. Also the thickness of coating polymer was varied to determine the effect of coating thickness on lag time.

The lag time was determined by visual observation of the pulsatile tablet in USP II paddle apparatus (medium: 0.1 N HCl for 2 h followed by phosphate buffer, pH 6.8, at 37°, rotation speed 50 rpm) and was determined as time point, when the outer coating ruptured (n=3).

The in vitro dissolution study of various pulsatile tablets was carried out in 900 ml of 0.1 N HCl for first 2 h, followed by 900 ml of phosphate buffer (pH 6.8). The dissolution medium was maintained at temperature 37±0.5°. The paddle speed was set at 50 rpm. At different time intervals 5 ml of sample was withdrawn and analysed by UV/ Vis spectrophotometer at 250 nm. At each time of withdrawal, 5 ml of fresh corresponding medium was replaced into dissolution vessel. The time when 10% or more of losartan potassium dissolved in medium was defined as end of lag time in this experiment. The test was performed in triplicate.

After determining drug content, the optimized formulation (HE2) was subjected to accelerated stability studies according to ICH guidelines (40±2º/75±5% RH) for a period of 3 months in stability chamber (Hicon, Delhi, India). Tablets were packed in amber colored wide mouth glass bottle hermetically sealed. The samples were taken out at 15, 30, 60 and 90 days and evaluated for the drug content and in vitro release study.

in vitro releases of the final formulations were carried out to determine whether the drug release profile after lag time followed a sigmoidal pattern. The results demonstrate that not all formulations showed pulsatile release with a distinct lag time. Batch HC1 to HC4 failed to produce burst release with a defined lag time (fig. 1). The reason for this is that crospovidone contained within core tablet did not produce requisite extent of internal stress required to exceed the mechanical strength of outer polymeric coat and rupture the coat. Moreover batches showed different percent of drug release depending on physicochemical properties of the polymer used for coating. 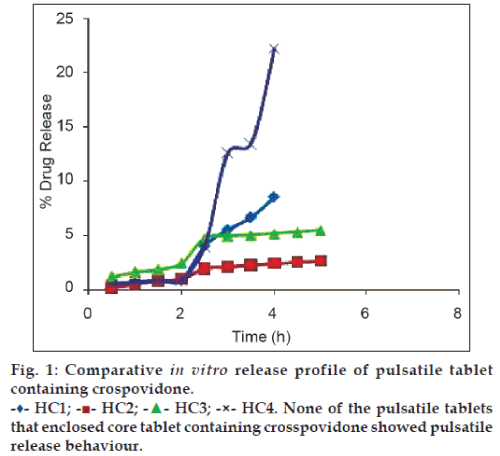 Among formulations enclosing core tablet with effervescent agent, all except HE4 produced desired drug release profile (fig. 2). The reason for pulsatile release behaviour by batch HE1, HE2, HE3 is that the internal pressure that is created by the effervescent core is more than the mechanical strength of outer polymeric coat. Similar to formulation HC1 to HC4, formulation HE1 to HE4 produced varying percent of drug release based on physicochemical property of coating polymers. They also produced varying lag time. Formulation HE4 failed to produce pulsatile release behaviour because its outer coat was made of HPMC K4M, which is swellable high viscosity grade. This provided the coat sufficient strength that could not be overcome by internal pressure generated by the effervescent agent. The results demonstrate that among the two HPMC grades used for coating, Tablet coated with grade HPMC E50 (Batch HE1) produced defined lag time while that coated with HPMC K4M (HE4) failed. This is due to difference in viscosity of both the grades of HPMC. HPMC E50 used is an erodible grade with low viscosity of 52 mPaS while HPMC K4M is swellable grade with high viscosity of 4697 mPaS [11]. In contrast to erodible polymers, swellable polymers have higher degree of cross?linked macromolecular networks (hydrogels) that fails to dissolve even after extensive water uptake and posses greater mechanical strength and hence HPMC K4M coated tablet did not produce burst release [12]. Similarly, in formulation HE2 which is coated with hydroxypropyl cellulose, duration of lag phase depended on hydration, swelling and dissolution of coat. This showed release profile very similar to tablet coated with HPMC E50 with slight increase in lag time of 4.5 h. 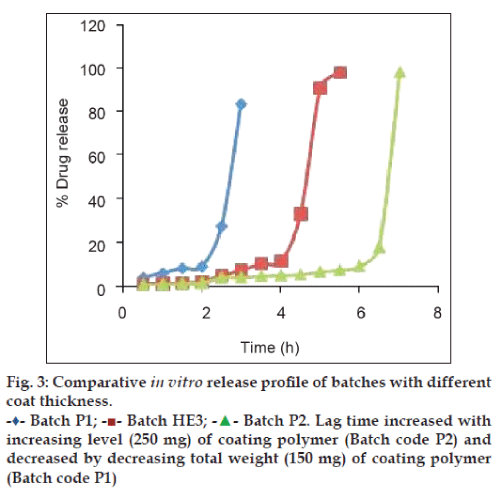 Batch HE3 coated with carboxymethyl cellulose sodium showed least lag time because of its high permeation and high water absorbing character [11], which leads to quick hydration of core tablet that evolves gas generating internal pressure. Also carboxymethyl cellulose sodium has lower extent of cross linking and gelling character than other three polymers that provided lesser extent of mechanical strength to its coat. 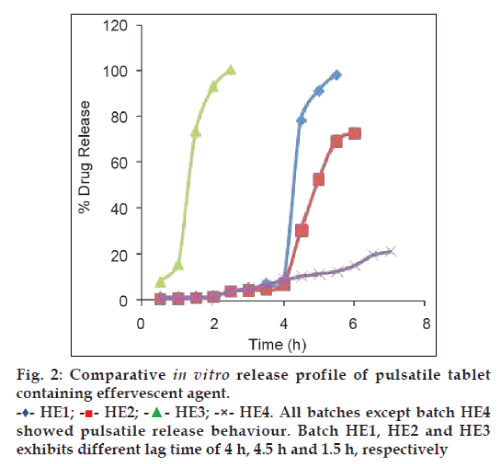 Fig. 4, demonstrates comparative in vitro release profile of marketed formulation with optimised batch HE2. 87% drug release in 2.5 h. was observed for marketed product. From the study on circadian behaviour of blood pressure and cardiac events, it is apparent that release of losartan potassium in pulsatile manner would be more effective than the conventional pattern achieved from marketed product. This suggests superiority of proposed formulation over marketed product. 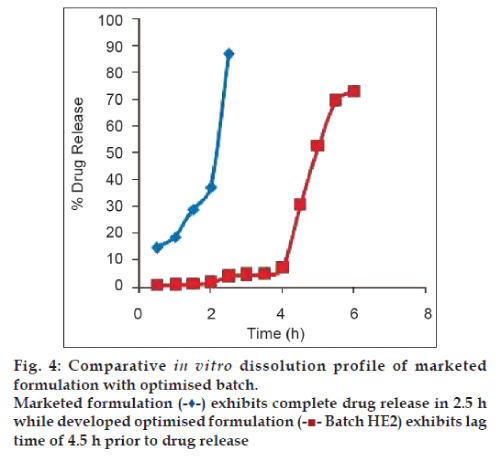 Results of accelerated stability studies reveal that the tablet did not show any change in physical appearance during the study period. Drug content (n=3; mean±SD) was found to be 99.3±0.31%. This signifies that optimised batch has stability and potency at accelerated conditions within 3 months. The dissolution profile of these tablets also did not show any significant variation.

Over the past decade, increasing interest has been directed towards oral pulsatile delivery especially because of its potential suitability for meeting chronopharmaceutical needs related to widespread diseases with circadian symptom variation. The designated pulsatile system characterised in this study demonstrate that after oral administration, the coat rupture determined the lag time. In the given system the coat ruptured due to internal pressure generated by the gas released from effervescent agent on hydration, which is present in core tablet. Polymer HPMC E50, HPC and NaCMC produced pulsatile behaviour while HPMC K4M failed due to greater viscosity and gelling character that provided greater mechanical strength to coat. The swelling polymer i.e. superdisintegrants failed to produce the extent of internal stress needed to rupture outer coat.

Batch HE2 was selected as optimised formulation with lag time of 4.5 h. and complete drug release up to 6 h. It was also determined that lag time was directly proportional to viscosity of coating polymer and coating level. Thus this approach can provide a useful means for pulsatile release (with single pulse) of losartan potassium and may be helpful for patients with morning surge in blood pressure.