P. Selvam* and A. Wadhwani1

Andrographis paniculata (Acanthaceae) is a versatile medicinal plant being a very good source for a variety bioactive molecules such as andrographin and andrographolide, which possessed a board-spectrum of biological actions [1]. Neuroblastoma (NB) cell lines are transformed into, neural crest derived cells, capable of uncontrolled proliferation in vitro [2]. NB cell lines retain the ability of differentiation into neuronal cell types on treatment with various chemical agents [3,4]. This ability of NB cells to proliferate as well as to differentiate makes it an excellent in vitro system for various studies.

Review of literature revealed that the A. paniculata silver nanoparticles (APAgNPs) were documented for anticancer [5], hepatoprotective [6] and antibacterial activity [7-9]. Based on the above medicinal values of APAgNPs, current work was planned to synthesize and characterize the AgNPs from the methanol leaf extract of A. paniculata and to evaluate their anticancer potential against NB cells (SH SY5Yc) and Vero cells.

Fresh leaves of A. paniculata were collected from Watrap area, Virudhu Nagar district, Tamilnadu, dried under shade and powdered. One hundred grams of A. paniculata leaves powder was packed in a Soxhlet apparatus and extracted using hot continuous extraction process with methanol at 100° for 48 h to achieve complete extraction. Solvent was recovered from the leaf extract by distillation to concentrate the extract. Extract was dried under vacuum and stored under 5° until further use.

Silver nitrate (AgNO3) was obtained from HiMedia (Mumbai, India). Aqueous solution of 1 mM AgNO3 was used for the synthesis of AgNPs. For the preparation of AgNPs, 5 ml of A. paniculata leaf methanol extract (100 mg dried methanol extract was dissolved in 5 ml of distilled water to make a 2 % W/V solution) was mixed with 95 ml of 1 mM AgNO3 solution in a conical flask. Flask was stirred in a magnetic stirrer for 3 h at 200 rpm. The AgNPs obtained were analysed in a UV/Vis double beam spectrophotometer in the range of 350-800 nm.

UV/Vis spectrum of the AgNPs obtained from A. paniculata was used for calculation of plasmon resonance band in a Shimadzu double beam UV/Vis spectrophotometer. The scanning electron microscopy (SEM) study was carried out on a Carl Zeiss EVO-18 electron microscope. For SEM imaging to visualize the morphological size and shape of the APAgNPs, a sample of the nanoparticles solution was placed on a carbon strip attached to a SEM brass, extra solution was wiped off using a blotting paper and then allowed to dry under a mercury lamp for 5 min. The Fouriertransform infrared spectra were analysed using IR Tracer-100 Shimadzu, Fourier-transform infrared spectroscopy (FTIR) and using the spectral range 4000- 400 cm-1. A small amount APAgNPs is placed in ATR diamond disc (zinc selenide) for FTIR measurement. The crystalline and the lattice characteristics of the synthesized APAgNPs were measured by powder X-ray diffraction (XRD) analysis. The XRD measurement was carried out on thoroughly dried thin films of the purified APAgNPs, which was spread on a glass slab on a D8 Advance ECO XRD Systems with SSD160 1D Detector-Bruker XRD 6000 instrument operated at a voltage of 20 keV and a current of 30 mA with CuKα 1 radiation (λ=0.1542) in a θ-2 theta (degree) configuration.

Methanol extract and the AgNPs there from were studied for anticancer activity against SH SY5Yc cells and for cytotoxicity against normal Vero cells using the 3-[4,5-dimethylthiazol-2-yl]-2,5 diphenyl tetrazolium bromide (MTT) assay [10]. The parameters such as inhibitory concentration (IC50) and cytotoxic concentrations (CC50) were measured for the analysis of anticancer and cytotoxicity potential of APAgNPs.

In this investigation, AgNPs were synthesized by the addition of the methanol extract of A. paniculata leaves to AgNO3 solution and stirring the mixture on a magnetic stirrer till colour of the reaction medium changed from colourless to reddish-brown (Figure 1). The biosynthesis of AgNPs was initially confirmed using surface plasmon resonance phenomenon and UV/Vis spectra. The AgNPs obtained from A. paniculata leaf extract gave a plasmon resonance band at 468 nm (Figure 1). The peak position did not change with time indicating the stability of the AgNPs formed. The FT-IR experiments were carried out to identify the compounds responsible for the bioreduction of Ag ions and capping of the bio-reduced AgNPs (Figure 2). FT-IR spectrum of the AgNPs of leaf extract showed peaks at 3410, 2881 and 2821, 1764, 1382, 1083 and 82 cm-1 in the region of 4000-500 cm-1. The absorption peak at 1764 cm-1 represented carbonyl group (C=O), the peak at 3390 cm-1 represented hydroxyl group (-OH) and peaks from 2881 and 2821 cm-1 indicated the alkyl stretching. Peak at 1083 cm-1 for C-O-C and 821 cm-1 for Ar-H. To investigate the crystalline nature of the biosynthesized AgNPs, XRD analysis was performed. Figure 3 revealed two peaks at degree 2 θ 35.1°, 36.2°, corresponding to two diffractions from (220), (122) planes of silver (as correlated to JCPDS: file no. 4-783). The nanoparticles are spherical in shape and crystalline in nature [11]. SEM analysis was used to study the morphology of APAgNPs and Figure 4 depicts the size and shape of nanoparticles. AgNPs were spherical in shape and their size ranged from 18-70 nm under SEM observations. 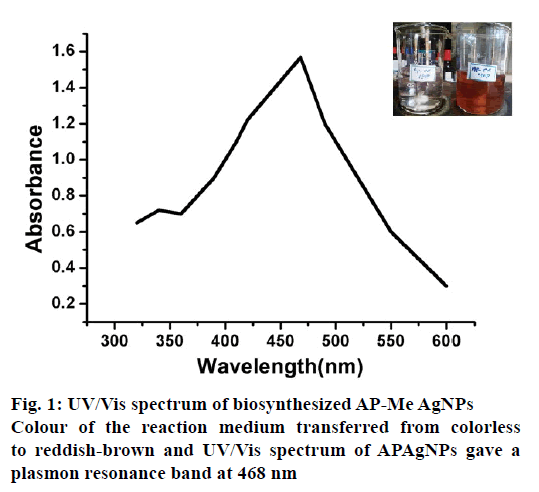 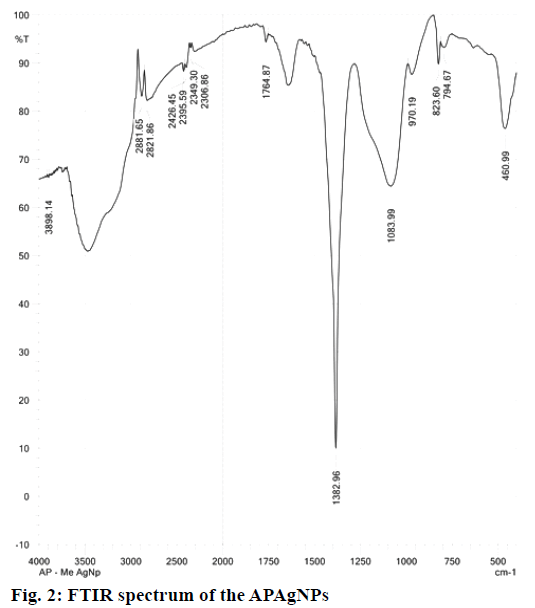 Figure 2: FTIR spectrum of the APAgNPs 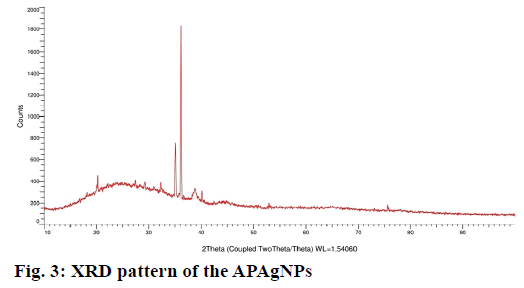 Figure 3: XRD pattern of the APAgNPs Figure 4: SEM micrograph of the APAgNPs
Based on the above observations, AgNPs were found to be spherical in shape with a size range of 18-70 nm

Anticancer activity of these APAgNPs was tested against SH SY5Yc cells and cytotoxicity was investigated in normal Vero cells (n=3) using the MTT assay. APAgNPs and the methanol leaf extract showed anticancer activity against SH SY5Yc cells with IC50 value of 32 and 60 μg/ml, respectively (Figure 5A and B). The nanoparticles and leaf extract did not show cytotoxicity against Vero cell lines at these concentrations and the CC50 values were found to be 329.29 and 368 μg/ml, respectively (Figure 6A and B). From previous reports, the AgNPs prepared from the ethanol extract of A. paniculata exhibited significant antibacterial activity [12,13]. Gold nanoparticles biosynthesized from A. paniculata leaf ethanol extract had potent cytotoxicity against HeLa cells [14].

In conclusion, complete extraction was achieved using hot continuous process resulting in the maximum bioactive molecule content in the extract. Biosynthesize of AgNPs using methanol extract of leaves of A. paniculata would help in preparing potent cytotoxic agents to destroy tumor cells. To the best of our knowledge, this is the first report in the literature demonstrating the anticancer activity of APAgNPs against NB cells.