Over the years, there has been an intensive research to elaborate the role of serotonin (5-hydroxytryptamine, 5-HT). Until now, seven types of 5-HT receptors and their subtypes have been identified [1-3]. These receptors are located both centrally as well as peripherally. The central 5-HT receptors are responsible for controlling various physiological functions such as memory, appetite, thermoregulation sleep and sexual behavior [4]. Of all the centrally located 5-HT receptors, the 5-HT1A receptors are the best-studied subclass of the serotonin receptors. They are proposed to be associated with depression and anxiety [5]. Activation of the presynaptic 5-HT1A receptors is also responsible for the lag time associated with the action of the Selective Serotonin Reuptake Inhibitors (SSRIs) class of antidepressants [6]. The antagonism of the presynaptic 5-HT1A receptors will decrease the lag period thereby making these antagonists important adjuvants in the antidepressant therapy.

Propranolol, a beta adrenergic blocker is reported to bind to the 5-HT1A receptor [7]. The cardiac effects of propranolol preclude its use as 5-HT1A antagonist. It can however serve as a lead compound for the development of 5-HT1A antagonists. Literature reports that the alcoholic group on the side chain of propranolol is an absolute must for its beta blocking activity, whereas compounds devoid of this group show 5-HT1A antagonistic activity. The pharmacophore model reported for 5-HT1A antagonists specifies that an aromatic ring and basic nitrogen at a distance of 5.6 A0 are the important pharmacophore elements [8]. Taking all these into consideration, it was decided to synthesize various substituted 2-naphthyloxyethylamines which satisfy the pharmacophoric requirements. Apart from the aryloxypropanolamines, arylpiperazines constitute the other important class of 5-HT1A antagonists. Therefore it was decided to combine the structural features of this class i.e. a piperazine ring in the title compounds.

The reaction of sodium salt of 2-naphthol (1) and 2-choloroethanol (2) yielded 2-(2-naphthyloxy) ethanol (3) which was then converted to its tosylate (4) by reacting it with p-toluenesulphonyl chloride. The title compounds i.e. N-substituted 2-(2-naphthyloxyethyl) amines (5a-j) were synthesized by reacting the tosylate with various amines (Scheme 1). The details of the synthesized compounds are given in the Tables 1 and 2. The melting points of the synthesized compounds were determined using open capillary tubes, and are uncorrected. The IR spectra were determined using Jasco FT-IR 5300 by KBr pellet method. The PMR spectra were recorded on Varian FT-NMR 300 MHz using CD3OD as the solvent. The elemental analysis was done on a Thermo-Finnegan ß ash EA 1122 and GC-MS was done on a GC-DHP G 18 008. 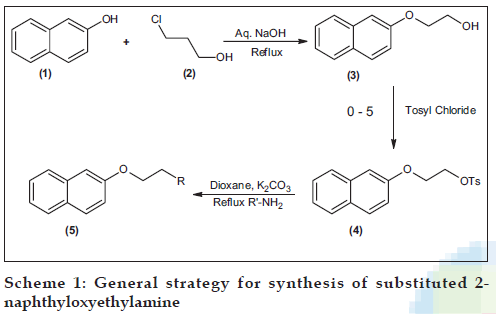 The testing for a possible 5-HT1A antagonistic activity was done in mice. The necessary permission for carrying out animal testing was granted by Institutional Animal Ethics Committee [12/02-03 dated 22.03.03]. Four groups of male albino mice, each comprising of five animals were used for the testing of each compound. Each compound was tested at two dose levels of 10 mg/kg and 20 mg/kg, respectively. Propranolol hydrochloride was used as a positive control. The test compounds dissolved in distilled water were administered intraperitoneally to two groups. One group acted as negative control and one group acted as positive control. The specific partial agonist 8-hydroxydi-n-propylaminotetralin (8-OH DPAT) was administered subcutaneously at the dose level of 0.5 mg/kg, 30 min after the administration of the test compound or positive or negative control. The rectal temperature was measured using a clinical thermometer and compared against the positive and the negative control. Table 3 shows the response obtained with various compounds.

Mouse was chosen as an animal model because of a sufficient concentration of presynaptic 5-HT1A receptors in mice apart from the ease of handling. The compounds were tested for their ability to reverse hypothermia produced by the administration of the specific partial agonist at 5- HT1A receptor, i.e. 8-OH DPAT [9]. After recording the reversal of hypothermia, the average fall in temperature corresponding to each group of 5 mice was calculated. These values were compared with the positive and negative control values and the statistical significance was calculated at p<0.001.

The synthesized compounds were converted to their hydrochloride salts. These salts were water-soluble and thus an aqueous solution could be easily prepared for the intraperitoneal administration. As can be seen from Table 3, many of the synthesized compounds showed an activity comparable to or better than the positive control. Compounds 5a-c containing a secondary amine function is moderately active. The activity of these compounds is statistically insignificant as compared to the positive control at 10 mg/kg dose level. The extent of reversal of hypothermia at 20 mg/kg dose level is also lesser than compounds 5e-j. Compound 5d containing cyclohexylamine function is the least active compound. Compounds 5e-j contains a tertiary amine group and displays a better reversal of hypothermia as compared to the positive control at both the dose levels. Beta blockers are reported to tolerate only a small alkyl group on the secondary nitrogen. As against that, the 5-HT1A receptor appears to be more flexible with respect to the nitrogen substituents and may tolerate larger substituents. In conclusion, substituted 2-naphthyoxyethylamines show 5-HT1A antagonistic activity and can be taken up for further study.

Authors are grateful to AICTE for the sanction of grant. The support of H(S)NC Board and the Principal of Prin. K. M. Kundnani College of Pharmacy is gratefully acknowledged.