In the present investigation a novel, scientific, simple, and reliable nail safety screening test based on Fourier-transform infrared spectroscopy was developed for the screening of nail-friendly transungual drug permeation enhancers. In this test, nail clippings were treated with the permeation enhancer and their FTIR spectra were recorded and compared with FTIR spectrum of untreated nail clipping. With the help of three spectral parameters namely, peak purity index, peak intensity ratio, and peak-fitting analysis any type of structural alteration brought out by the permeation enhancer in the matrix of nail plate could be determined and nail safety could be readily assessed. The validity of the proposed method was established by studying the effect of eight different types of permeation enhancers, thioglycolic acid, salicylic acid, n-acetyl-l-cysteine, sodium sulfite, resorcinol, sodium hydroxide, oxalic acid, and hydroxypropyl-β-cyclodextrin on the nail clippings. It was observed that thioglycolic acid, salicylic acid, sodium sulfite, resorcinol, sodium hydroxide, oxalic acid, and n-acetyl-l-cysteine severely damaged the nail plate keratin as evidenced by the significantly altered values of peak purity index, peak intensity ratio, and peak-fitting analysis, whereas hydroxylpropyl-β-cyclodextrin was found to be innocuous as the above three spectral parameters remained almost unaltered. This technique could be easily employed for screening nail-friendly drug permeation enhancers from the large pool of available chemical permeation enhancers during the preformulation stage of development of transungual drug delivery systems.

For years, the treatment of onychomycosis was principally based on oral antifungal drug therapy but due to high incidences of nephrotoxicity and hepatotoxicity of orally administered antifungal drugs [1,2], the oral drug delivery is being gradually replaced by transungual drug delivery through topical application of nail lacquer formulations. Due to selective drug targeting to the nail unit in this therapy, very low incidences of drug side effects are observed because of lower systemic absorption of administered drugs by this route. These transungual formulations are, however, associated with the inherent problem of poor transungual drug permeability due to highly impermeable nature of keratinized nail plate [2]. The research findings have shown that the drug permeation across nail plate can be significantly enhanced in presence of some keratolytic agents, which can disrupt keratin network of nail plate and thus weaken its barrier property resulting into enhancement of drug permeation [3-5]. Keratolytic agents, urea and salicylic acid destabilize hydrogen bonds, while sulfhydryl compounds such as 2-mercaptoethanol cleave the disulphide linkages of nail keratin and enhance permeability of nail plates [6]. As these types of permeation enhancers irreversibly damage the microstructure of nail plate, these cannot be considered as safe and nail-friendly permeation enhancers for increasing the transungual permeability of drugs [7]. The structural alterations might turnout to be permanent in nature since transungual formulations are applied for a long period of time ranging from 6-12 mo [6]. Therefore, screening of transungual permeation enhancers for their nail safety is necessary at preformulation stage of product development. In the present investigations a nail safety test technique for evaluation of permeation enhancers was evolved. The test is based on Fourier-transform infrared (FTIR) spectroscopic analysis of nail plate.

FTIR spectroscopy is a widely used analytical technique for the identification and characterization of secondary structure of proteins. Chemically the nail plate is composed of ~80 % w/w hard α-keratin protein with ~10 % w/w content of cystine [3,8,9]. Quantitative information about the secondary structure of a keratin protein could be obtained by analysing the amide-I band observed in the FTIR spectrum (1700-1600 cm-1) of protein [10,11]. The amide-I band is originated from the C=O stretching vibration of the peptide group, and its frequency depends upon the hydrogen-bonding and coupling along the protein chain and therefore, appearance of this band in the FTIR spectra is dependent on the conformation of the secondary structure of the protein [10].

The validity of the above hypothesis was experimentally tested by exposing human nail clippings with different types of permeation enhancers, which were reported to have a good transungual drug permeation enhancement property. The FTIR spectra of nail clippings were recorded before and after treatment with these permeation enhancers and compared for the changes in the secondary structure of nail keratin protein due to their effect. Three spectral screening parameters namely, peak purity index, peak intensity ratio, and peak-fitting analysis were evolved and employed for this study. The proposed technique is a new, innovative, and non-invasive approach to screen the given permeation enhancer as safe or unsafe for transungual drug delivery applications.

The nail clippings that were exposed to permeation enhancers were rubbed against a metallic nail file. Sufficient amount of nail powder produced was mixed with spectroscopy grade potassium bromide in the ratio of 1:4 and ground further. The mixture was placed in the small sample holder of diffused reflectance spectroscopy assembly of a FTIR spectrophotometer (IR Affiniti-1, Shimadzu, Japan) and the FTIR spectrum was recorded in the range of 400-4000 cm-1.

As the integrity of nail plate is dependent on the stability of secondary structure of nail plate protein, therefore, determination of secondary structure of nail plate protein could give more accurate information about the exact effect of permeation enhancers on integrity of nail plate [11]. In the present study, changes in the secondary structure of nail keratin protein produced by permeation enhancers was measured by the peakfitting analysis. The region of amide-I band (1750- 1550 cm-1) of the FTIR spectrum of control nail clippings and permeation enhancer-treated nail clippings was selected for the analysis as this is specifically contributed by the secondary structure of protein and produced by additive effect of different bands assigned to the α-helix structures, β-sheet component, and turns of secondary protein structure [14]. To resolve these bands the peak-fitting analysis was done using Peakfit-4.12 software (Systat software Inc., CA, USA) as a linear combination of Gaussian components. First, the flat baseline of the amide-I band at 1750-1550 cm-1 was obtained by adjusting the subtraction factor, then the Savitsky-Golay smoothing was applied (3rd grade polynomial, 5 smoothing points) to the spectrum to obtain a second-derivative spectrum. During the peakfitting, a number of Gaussian bandwidths and initial values of their peak positions were obtained from the second derivative spectrum. Taking the above values as initial parameters, the curve fitting of the amide-I band was done by leaving the parameters free to adjust iteratively except the peak wave-numbers, which were allowed to vary only within a range of ± 2 cm−1. Finally, the area corresponding to each secondary structure was calculated and expressed as the percent area of the amide-I band [11].

The FTIR spectrum of human nail plate is presented in Figure 1. For the purpose of interpretation, the FTIR spectrum of human nail clipping was divided into three basic regions; first region falling between 4000- 3000 cm-1 consisted of bands of water and hydroxyl group present in the nail plate and signifies the nature of hydrogen bonding, the second region located between 3000-1500 cm-1 described the bands for functional groups. The third region lying between 1500-200 cm-1 indicated peaks due to some salts and organic molecules present in the nail. In the first two regions the major FTIR absorption peaks of chemical contents of nail plate have appeared. In the second and third regions the amide-I, II, and III bands are present (Table 2). Majority of these bands belong to protein structure of nail [15]. The amide-I band (1643.55 cm-1) originated mainly from the C=O stretching vibrations of the amide groups weakly coupled to the in-plane N-H bending and C-N stretching modes. The exact frequency of amide-I band depends on the nature of hydrogen bonding formed due to the C=O and N-H groups, and any change in secondary structure of protein would reflect into change in the nature of hydrogen bonding. Therefore, the frequency of the amide-I band has been used to identify the alterations in secondary structure of proteins and polypeptides in biological samples [14]. 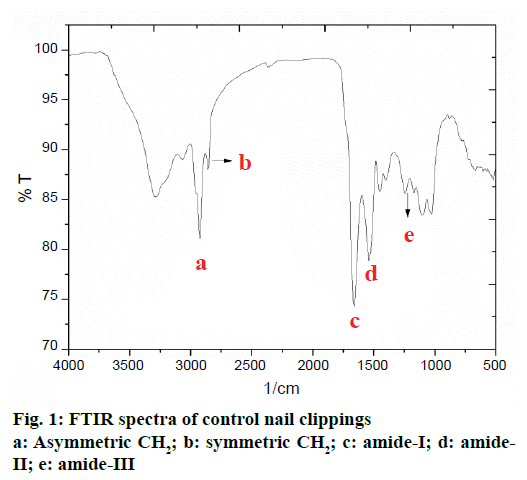 Table 2: Identification of Peak Positions in the FTIR Spectrum of Control Nail Clippings 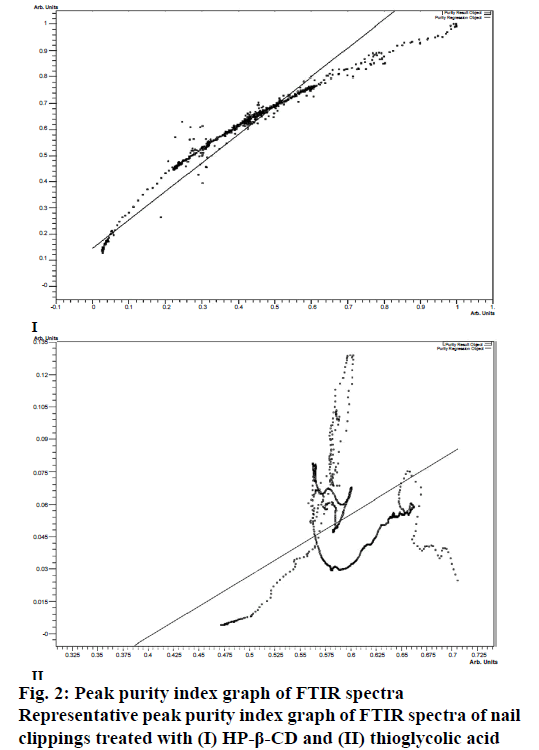 *peak not detected, NA: Not applicable 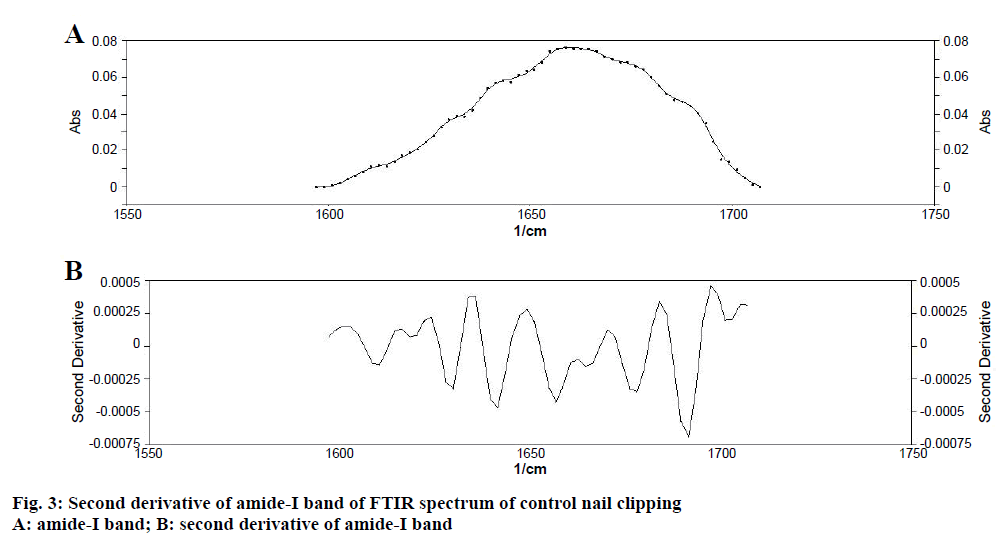 Authors would like to acknowledge Roquette Corporate (Lestrem Cedex, France), for generous supply of gift sample of hydroxypropyl-β-cyclodextrin (Kleptose® HPB) for present studies.