Mucoadhesive drug delivery systems were derived from the need to localize drug at a certain site in the body like eyes, nose, buccal, intestine, vagina and rectum [1]. Among these, the vaginal route is considered to be suitable for the local application e.g. antiinfectives and contraception; and absorption of estrogens for hormone replacement therapy. Conventional vaginal delivery systems include tablets, foams, gels, suspensions, and pessaries. Most of these are associated with a number of problems, including leakage and messiness, causing discomfort to users and expulsion due to the self-cleansing action of the vaginal tract. These limitations lead to poor patient compliance and failure of the desired therapeutic effects [2]. In addition to providing the required relief, vaginal products need to be designed for women’s convenience. These limitations may be overcome by novel mucoadhesive vaginal films. Though there is availability of various vaginal contraceptives, presently marketed vaginal contraceptive available over the counter contains nonoxanol-9 (N-9) as the active ingredient. However, studies have shown that frequent use of N-9 leads to vaginal irritation and lesions on the epithelium, which could even increase the risk of STDs transmission including HIV [3]. Metronidazole a nitroimidazole antibacterial agent has proved to be very effective for the therapy of amoebiasis, trichomoniasis, lambliasis and anaerobic infections [4]. Intravaginal metronidazole is safe, effective, well tolerated and already established. Many studies have been concluded the efficacy of metronidazole as a local spermicide [5]. Hence in this work mucoadhesive metronidazole vaginal film for contraception using mucoadhesive polymer has been designed.

Films were cast by solvent evaporation method and those composition exhibiting appreciable organoleptic properties were selected for metronidazole incorporation. The formulae of metronidazole vaginal films are shown in Table 1. Metronidazole was dissolved in glacial acetic acid. Aqueous solutions containing various ratios of polymers and plasticizer were prepared and mixed by stirring mechanically at room temperature, followed by centrifugation (3000 RPM for 15 min) to remove entrapped air. Solution was then poured into Anumbra petriplates followed by drying in oven at 45º. Drying time of films varied from 24 to 48 h depending upon volume of poured liquid. The films resulted were removed from the dish and cut using a sharp scalpel, after complete drying. The films were wrapped in aluminium foil and stored at room temperature and studied for the aesthetic, physical mechanical properties and in vitro drug release.

Appearance of the films was evaluated by observing the color, elegance, stickiness and texture. For the evaluation of the weight, five films of every composition were taken and weighed individually on digital balance (Mettler Toledo, USA) and average weights were calculated. Similarly, thickness of each film was measured at five different locations (centre and four corners) using a micrometer screw gauge (Hi-Tech Metrology Pvt. Ltd., India.) and a mean value of the five locations was used as film thickness. Three films of each formulation of size (2×2 cm) were cut by using sharp scalpel. Folding endurance was determined by repeatedly folding a strip of film size (2×2 cm) at the same place till it broke. The number of times a film could be folded at the same place without being broken gave the value of folding endurance. For further determination of mechanical properties including tensile strength and elongation at break, the film was cut into a narrow strip with a width of 3 cm and 10 cm in length. The film was secured between the upper and the lower grip which were controlled by a pneumatic grip controller mounted on test stand (Instron Tensile Strength Tester, Tinius Olsen, USA) aligning the long axis of the specimen and the grip with an imaginary line by joining the points of attachment of the grip to the machine. The two grips were kept at a distance of 8 cm in the same plane. Lower grip was fixed and the upper one was moved at a rate of 1 mm/s. The stress strain curve was recorded for the samples. Ultimate tensile strength (force per unit area required to break the film) and percentage elongation at break were determined [6]. Peelability of films was assessed on the basis of ease of removal from casting surface. For determination of surface pH three films of each formulation were allowed to swell for 2 h on the surface of agar plate. The surface pH was measured by placing the pH paper on the surface of swollen patch. A mean of three readings was recorded. For the swelling study three weighed films of each formulation were allowed to swell on the surface of agar plate kept in an incubator maintained at 37±0.2º. Increase in weight of the film was determined at the predetermined time interval (1-2 h). The swelling index, S, was calculated using the following equation: Swelling Index (S)= wet weight-dry weight/dry weight

To ensure the uniformity of distribution of metronidazole in a film, a content uniformity test was performed. One square centimetre of samples representing five different regions (centre and four corners) within the film were cut off, weighed and dissolved in 100 ml of water and stirred for 2 h, filtered and analysed by using a UV-spectrophotometer, λmax 318 nm. Rate and extent of release of metronidazole from the films was studied in 100 ml of vaginal simulated fluid (VSF), maintained at 37±0.2º and stirred on a magnetic stirrer at 100 rpm [2]. The samples (sample volume 2 ml) were withdrawn periodically with VSF replacement at predetermined intervals of time and analyzed by using a UV-spectrophotometer. In vitro mucoadhesion of the vaginal film was studied by the modifying the procedure as reported by Agrawal and Mishra using the rat vaginal mucosa [7].

Metronidazole films containing various polymers and PG as plasticizer were prepared and their physicochemical properties such as weight, thickness, tensile strength, elongation at break, uniformity of drug content, surface pH were examined and results are shown in Table 2. Batch F1 and F2 films were colorless and transparent; batch F3 films were slightly yellowish might be because of Chitosan and batch F4 films were white. Variation in weight and thickness of the films found because of the effect of difference in molecular weight and proportion of polymers used in the films. The flexibility of the films which is required for their easy handling is given by the folding endurance and it ranged from 250-300 which was satisfactory to reveal a good film property. The films which were intended as a dosage form for intravaginal drug delivery should possess sufficient strength to withstand the mechanical stress during handling and application. Tensile strength is defined as the maximum stress hold up by the material. Tensile strength tests enable studying the mechanical properties of the films. As shown in the Table 2, tensile strength varied according to the composition of the batch. Among all the batches, batch F4 showed good degree of tensile strength and highest % elongation at the time of break. Vaginal pH varies from 4-5 and efforts were made to maintain the same for Metronidazole films. Batch F1 and F2 were found to have lower surface pH as compared to other batches; this was because of acidic nature of Carbopol. Drug content in the film among all the batches was found to be uniform within a range of 3.39±0.03 mg/cm2. On this basis, it was found that the drug was dispersed uniformly throughout the surface of petriplate and the film. Keeping in view the necessity and importance of mucoadhesion testing in the development of mucoadhesive dosage forms, a modified simple method was developed for the determination of mucoadhesion. The maximum strength of adhesion was possessed by batch F4 followed by batch F1 and F2 which contained Carbopol:HPMC ratios of 1:1 and 1:2, respectively. Carbopol possesses good degree of bioadhesion and strength of bioadhesion decrease as another polymer i.e HPMC concentration increases [8]. Degree of adhesion produced by chitosan: HPMC was less as compared to others. Swelling of polymer occurs immediately upon hydration. As the dry polymer becomes hydrated, the mobility of the polymer chains increase, thereby allows the relaxation of the molecules, exposing their adhesive sites and facilitating interpenetration between the molecules of the polymer to a sufficient depth in order to create adhesive bonds. As polymer chains become more hydrated, the disentanglement of polymer molecules takes place and get detached from mucosa [9-11].

In the swelling index study, an agar plate was chosen as the simple model of the mucosa as it can keep an amount of water that might resembles the secreting fluid in and around the vagina required for the mucoadhesion and subsequent swelling of the films to provide adequate drug release. The swelling index of the prepared vaginal films was found in the order F3>F1>F2 (Table 3). Batch F4 swelled and was converted into a gel within first 15 min. This might be because of the property of Polyox to get converted into gel after taking up water from the surrounding. Among F1 and F2, initially F1 showed less swelling than F2 however after 90 min, F1 exhibited high swelling than F2. This could be because Carbopol takesup and holds more water than HPMC [12]. Film from batch F3 showed swelling which after an hour lead to conversion into thick mass. The in vitro drug release profiles of metronidazole from polymeric films are shown in fig. 1. To study the release profile of drug VSF was used as dissolution medium to simulate the vaginal conditions. F1 showed prolonged release as compared to other formulations which might be because of high content of the Carbopol. F2 and F4 showed moderate release of drug where as F3 showed fast. The fast release from F3 may be due to faster swelling and disintegration of the polymer network resulting in more void space and fast drug release [10].

Values are expressed as mean±SD; n=3. 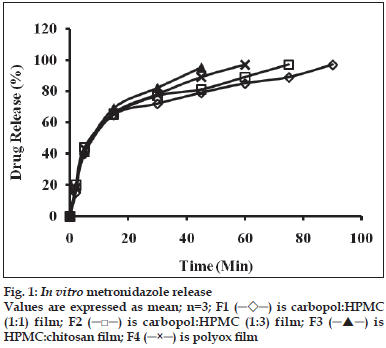 Mucoadhesive vaginal films composed of Carbopol, HPMC, chitosan, Polyox and PG were formulated successfully by casting method. It was found that the films had proper physicodynamic properties and compliable physical appearance. Among all the formulations F4 was found to be suitable for the metronidazole vaginal films, as it possess property to get converted in to gel immediately after a contact with VSF. This also would aids in building a mechanical barrier and the lubrication of vagina. The film also had acceptable degree of mucoadhesion and maximum tensile strength and elongation at break. Thus the present investigation established user friendly metronidazole vaginal films.