Pseudomonas aeruginosa (P. aeruginosa) is an obligate aerobic and can persist in both community and hospital settings due to its ability to survive on minimal nutrition requirements and tolerate various physical conditions [1]. P. aeruginosa is the most frequent bacterial species associated with infections such as urinary tract infections, respiratory infections, dermatitis, soft tissue infections, gastrointestinal infections and various systemic infections, particularly in patients with severe burns [2,3].

P. aeruginosa utilizes many secreted virulence factors that have been implicated in the pathogenesis of infection. These including exotoxin A, phospholipase, alkaline protease, pili, flagella and lipopolysaccharide [4]. The important problem of this organism is the development of drug resistance mechanisms. As a matter of fact, P. aeruginosa has an outer membrane with low permeability, multidrug discharge pumps, efflux pumps, inactivation and modification of antibiotics lactamase and the outer membrane purine degradation set, which could be the reason for the resistance of these microorganisms during the treatment [5-7].

The CTX-M type ESBLs developed from TEM and SHV and can be divided into five subgroups according to their amino acid sequence similarities, including CTX-M-I, CTX-M-II, CTX-M-III, CTX-M-IV and CTX-M-V [11,12]. The most common group of ESBLs not belonging to the TEM or SHV families was termed CTX-M to highlight their greater activity against cefotaxime than against ceftazidime [13]. Some of them, such as CTX-M-15 and CTX-M-19, also hydrolyze ceftazidime efficiently [14], which may complicate their phenotypic recognition [15]. CTX-M ESBLs are the most commonly isolated ESBLs in many parts of the world, particularly Europe [8,16].

Resistance to ESBLs in P. aeruginosa is associated in most cases with the overproduction of cephalosporinases Ampicillin Class C (AmpC) [1]. ESBLs is one of the main leading causes of resistance to beta lactam antibiotics among Gram-negative bacteria [17]. This enzyme is plasmid-encoded beta lactamase that mediate resistance to penicillin, first, second and third generation cephalosporin, such as cefotaxim, ceftriaxone and ceftazidime [17,18]. TEM, SHV and CTX-M are the major genetic groups of ESBLs amongst clinically Gramnegative bacteria [18,19].

Aminoglycosides are used in the treatment of a broad range of life-threatening infections. The activity of aminoglycosides depends on binding to a highly conserved motif of 16S Ribosomal Ribonucleic Acid (rRNA). Aminoglycosides resistance mechanisms include decreased outer membrane permeability, active efflux and amino acid substitutions in ribosomal proteins. In contrast, the most common resistance mechanism is enzymatic, leading to a modification of the drug. Methylation of 16S rRNA has recently been demonstrated to be another mechanism of resistance encountered in Gram-negative organisms, corresponding to a modification of the antibiotic target. Methylases interfere in the binding of these antibiotics to their site of action. These 16S rRNA methylases confer a high level of resistance to clinically useful aminoglycosides such as amikacin, gentamicin and tobramycin [20,21]. The corresponding genes are associated with transposon structures located on transferable plasmids, enhancing their horizontal spread. Isolates producing 16S rRNA methylases are multidrug-resistant, particularly to broad spectrum beta lactams through the production of ESBLs or MBLs [21,22].

European Centre for Disease Control (ECDC) and Centre for Disease Control and Prevention (CDC), Atlanta have proposed standardized definitions for the Multidrug Resistant (MDR), Extensively Drug Resistant (XDR) and Pan Drug Resistant (PDR) bacteria. MDR was defined as acquired nonsusceptibility to at least one agent in three or more antimicrobial categories as per guidelines. XDR was defined as non-susceptibility to at least one agent in all but two or fewer antimicrobial categories and PDR was defined as non-susceptibility to all agents in all antimicrobial categories [23,24]. The main objective of this study was to detect MDR, XDR and PDR bacteria and to investigate the prevalence of blaCTX-M1, blaCTX-M2 and blaCTX-M3 genes producing ESBL among P. aeruginosa isolated from different clinical samples.

Collection and identification of samples:

650 different clinical samples including sputum, wound, burn and urine were collected from the patients admitted to Erbil hospitals and health centers from May 2019 to November 2019. Gram stains were used to determine the form of microscopic organisms. To determine the phenotypic identity, oxidase and catalase tests were used. The Gram-Negative card for the VITEK® 2 compact system is completely automated and provides identification and antibiotic susceptibility test. For the final determination, the molecular detection method of Polymerase Chain Reaction (PCR) was used with the gene of 16S rRNA [25].

Identification of species based on 16S rRNA gene:

The extraction of bacteria's genome was performed using an extraction kit (Invitek Stratec Business, Canada). Then, PCR test was done on the extracted gene for the 16S rRNA gene. In this study, one pair of primer with the sequence of F: GGGGGATCTTCGGACCTCA and R: TCCTTAGAGTGCCCACCCG were used together in a PCR reaction to identify the species [25]. The total of 25 μl PCR master mix reaction volume was performed for identification (16S rRNA) that containing 4 μl of genomic DNA, 12.5 μl of 2X GoTaq® Green Master Mix (Promega, USA) and 1.5 μl was added for each of the forward and reversed primer and completed with 5.5 μl nuclease free water and the thermal cycle with following steps were repeated for 30 times as shown in Table 1.

Table 1: Steps and Thermal Cycle of The 16s Rrna For Identification of Pseudomonas

Identification of the genes of blaCTX-M1, blaCTX-M2 and blaCTX-M3 in P. aeruginosa:

P. aeruginosa were nightly cultured in Luria-Bertani liquid medium at 37° for 24 h and DNA was extracted from the bacteria of P. aeruginosa using the kit (Invitek Stratec Business kit, Canada). Then, they were used on the genes of blaCTX-M1, blaCTX-M2 and blaCTX-M3 with the specific oligonucleotide primers which were simultaneously used for the process of PCR as shown in Table 2 [25,26]. Thermal cycler device was accurately set up for doing PCR process based on the mentioned resources in Table 3 [25,27,28]. The PCR products were separated in a 2 % agarose gel and stained with Safe dye (GenetBio, Korea). The gel was visualized under an Ultraviolet (UV) transilluminator (Synegene, UK).

Table 3: Steps and Thermal Cycle of The Genes of CTX-M1 and CTX-M2

62 P. aeruginosa strains were obtained from 650 different clinical specimens (9.54 %). All isolates were identified phenotypically, as shown in fig. 1. Using the VITEK® 2 automated system, then identification was confirmed by 16S rRNA gene according to the expected size of (956 bp) for identification of P. aeruginosa as shown in fig. 2. Of the 62 P. aeruginosa isolates, the highest resistances were related to the antibiotics of ticarcillin, ticarcillin/clavulanic acid, piperacillin, piperacillin/tazobactam, ceftazidime and cefepime (100 %). However, the lowest resistance was observed to meropenem and imipenem 2 (3.23 %), amikacin and ciprofloxacin 4 (6.45 %) and gentamycin tobramycin 12 (19.35 %) as shown in fig. 3. 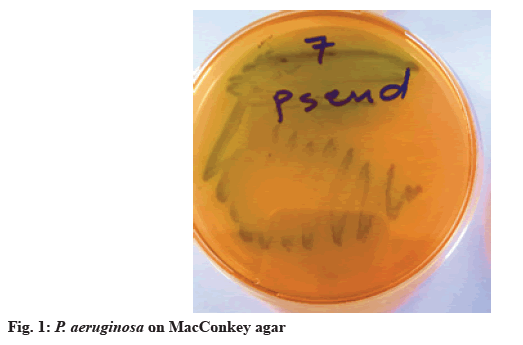 P. aeruginosa has recently emerged as a major cause of healthcare-associated infections, especially in immunocompromised people and burn patients [29,30]. The treatment of P. aeruginosa infections is increasingly complicated due to both intrinsic and acquired resistance to the most commonly prescribed antibiotics in hospital settings [1,31].

Inappropriate empirical therapy has been associated with increased mortality in P. aeruginosa infections; delays in starting appropriate therapy may increase length of hospital stay and infection persistence. With an increased prevalence of ESBL-producing pathogens, such isolates' fast and accurate identification becomes increasingly clinically important. Despite a variety of available methods, the identification of ESBLs by conventional phenotypic methods remains difficult in practice due to the large number of beta lactamase variants, the association of ESBLs with overproduced or plasmidborne cephalosporinases AmpC or MBL [32] and the change of outer-membrane permeability [33]. Hence, molecular methods that have the potential to disentangle this complex resistance etiology and translate it into clinically useful information have the potential to improve the current diagnostic practice [34]. ESBL-producing isolates were MDR and showed relatively higher resistance rates to most antibiotics tested [35,36].

Of the 62 P. aeruginosa isolates, the highest resistances were related to the antibiotics of ticarcillin, ticarcillin/ clavulanic acid, piperacillin, piperacillin/tazobactam, ceftazidime and cefepime (100 %). However, the lowest resistance was observed to meropenem and imipenem 2 (3.23 %), amikacin and ciprofloxacin 4 (6.45 %) and gentamycin tobramycin 12 (19.35 %). This result is in accordance with other reports, Asghar and Ahmed [37]; they reported that carbapenems are often used as a last resort treatment for Pseudomonas infections. Resistance to imipenem was shown to be 35.4 %. This difference in the distribution of aminoglycoside genes may be attributed to differences in aminoglycoside prescription patterns, selection of bacterial populations or geographical differences in the occurrence of aminoglycoside resistance genes.

The highest gene frequencies of ESBLs are related to blaCTX-M1 (19.35 %) and blaCTX-M2 (8.06 %). These explain the high resistance of P. aeruginosa to the third and fourth generation of cephalosporin.

Different results have been reported in other countries for the prevalence of the enzymes of ESBL related to CTX-M. Lin et al. [38] reported that amikacin had the highest susceptibility rate, whereas aztreonam had the lowest in Taiwan. Amikacin 91.2 %, ciprofloxacin 71.9 %, imipenem 70.2 %, cefepime 59.6 %, ceftazidime 56.1 %, piperacillin/tazobactam 52.6 % and aztreonam 17.5 %, and blaCTX-M genes were not detected in this study. In another study in Iran Bokaeian et al. [39], showed that ciprofloxacin (95.7 %) and piperacillin (92.2 %) were the most effective antipseudomonal agents and blaCTX-M1 genes were not detected.

Our results consistent with the findings of other studies in Saudi Arabia [40] that reported about (25.9 %) of P. aeruginosa isolates were confirmed as ESBL producers and the frequencies of blaCTX-M genes were 10.7 %. In a similar study in a Chinese hospital, the prevalence of ESBLs-producing P. aeruginosa isolates was (87.5 %) and (12.5 %) didn’t produce ESBLs. All ESBLsproducing isolates showed nearly identical antimicrobial susceptibility profiles. In another study in India blaCTXM amplified in (10.71 %) isolates [41]. In Bandar-Abbas, Iran, the frequencies of blaCTX-M genes were 23.95 %. They reported that the prevalence of different ESBL genes varies in different geographic locations. The blaCTX-M genotypes are prevalent in Asian countries [42]. CTX-M-type ESBLs, within some cases evidence of their horizontal transfer from Enterobacteriaceae to P. aeruginosa, are very rarely identified in P. aeruginosa. The genotypic prevalence of ESBLs for blaCTX-M-1, blaCTX-M-2 genes was 14.3 % and 9.6 %, respectively [43]. In Tabriz, Iran, the highest gene frequencies of ESBLs are related to the genes of CTX-M1 (27.27 %), CTX-M2 (23.63 %) and CTX-M3 (9.09 %), respectively [25]. A single CTX-M-1-producing P. aeruginosa isolate has been reported from The Netherlands in 2006 [44] and CTX-M-2 positive P. aeruginosa have been identified in South America [9,45,46]. Recently, CTX-M-3 was identified from several P. aeruginosa isolates from China [47].

The multidrug resistant phenotype in P. aeruginosa could be mediated by several mechanisms, including multidrug efflux systems, enzyme production, outer membrane protein (porin) loss and target mutations. These resistant organisms are clinically important because they result in increased morbidity and mortality. In addition, ESBL producing bacteria is frequently resistant to many antibiotics classes, resulting in difficult-to-treat infections. Currently, carbapenems are regarded as the drugs of choice for the treatment of infections caused by ESBL-producing organisms. The development and spread of ESBLs are most likely caused by the overuse of expanded spectrum cephalosporins in the hospital setting. Proper infection control practices and barriers are essential to prevent the spreading and outbreaks of ESBL-producing bacteria.

The difference in result for gene frequencies and antibiotic resistance may be due to either the different common colons present in a certain region or different antibiotic treatment patterns [49].

This study highlights the increased prevalence of multidrug resistant P. aeruginosa. The CTX-M ESBLs provide P. aeruginosa with an additional powerful resistance mechanism with potentially serious clinical implications, including limitation of the therapeutic options. The incidence of ESBLs varies with geographic location and time. ESBL producing strains are usually found in those areas of hospitals where antibiotic use is frequent and the patient’s condition is critical. This study revealed that among P. aeruginosa isolates exhibiting extended spectrum beta lactam resistance, there was a prevalence of blaCTX-M genes. The complete identification of ESBL and the restriction of beta lactam antibiotics can maintain the efficacy of beta lactam antibiotics as much as possible.