Traditional medicines have maintained their popularity in all regions of the developing world and are being adopted increasingly by people worldwide. Indian traditional system of medicine Ayurveda make use of unique metallicâ??herbal preparations (called Bhasma) which involves different processing steps including repeated steps of calcination of metal in the presence of natural precursor (herbal juices, decoctions, and powders, etc). It has been recently established that Bhasma contains nano/subâ??micron size particles and different nutrient elements. However, the role and the end product of the raw materials, especially the herbal parts, used during the synthesis of the drug (Bhasma) is one of the important but unanswered problems in such medicinal preparations. Present work on Naga Bhasma is an attempt to understand the role of natural precursors in detail. Our results on infrared, Raman and Xâ??ray photoelectron spectroscopy along with thermal measurements identify the presence of carbonaceous material (hydrogenated amorphous carbon) in the drug along with other compounds. In addition, this work also suggests the science and mechanism behind such complex preparations which could help in standardization of such medicines.

Traditional medicines have maintained their popularity in all regions of the developing world and are being adopted increasingly by people worldwide for their therapeutic and cosmetic properties [1]. Indian traditional system of medicine Ayurveda make use of metallic?herbal preparations (also called Bhasma, literal meaning ash) which involves different processing steps (complete process is called Bhasmikarana) including the repeated step of heating of the metal in the presence of natural precursors (herbal juices, decoctions, and powders, etc) of medicinal importance [2,3]. Bhasmikarana converts the free metal into metal compound (oxide or sulfide) which is insoluble and have no or a little reactivity with human tissues and body fluids. For example mercury, gold, diamond, iron, silver materials are thus transformed from their free state into potent medicines. They are usually prescribed at low doses (few mg) and are claimed to be very effective [4].

Presence of nano and micron size particles (with different shapes and surface morphology) in Bhasmas has been reported recently by several groups of workers [5?8]. One of the important but unanswered problems in such medicinal preparation is the role of the raw materials, especially the herbal parts, used during the synthesis of the drug (Bhasma). Since, most of the Bhasmas involves the repeated steps of calcination usually above 500° [9], therefore, in most of the reports it has been concluded that at such a high temperature the possibility of the organic materials derived from the herbal juices remains negligible and thus the role of natural precursors remains unaddressed.

Our earlier report on Naga Bhasma also shows the presence of nano?size crystalline PbS along with different nutrient elements in the finally prepared medicine. However, in contrast to the other works on Bhasma medicine, the work first time suggests the presence of organic matters in Bhasma medicine, but remains short for their identification [10]. Present work is an extension of the previous work on Naga Bhasma which removes the above lacunae and addresses the role of natural precursors in detail and also gives science and mechanism behind such complex preparations. Infrared (IR), Raman and X?ray photoelectron spectroscopy (XPS) along with thermal measurements [differential scanning calorimetry (DSC) and theromogravimetric analysis (TGA)] have been carried out to identify the presence of carbonaceous material in the medicine.

Preparation procedure of the medicine is given in detail in our previous work on Naga Bhasma [10]. Fourier transform infrared (FTIR) spectra were recorded in the 400?4000 cm?1 spectral region on Perkin Elmer, Spectrum RX?I spectrophotometer. The spectra were collected at a resolution of 4 cm?1. Each spectrum was the average of sixteen scans. Raman spectrum of the medicine was recorded on a micro?Raman setup (procured from Renishaw, UK) equipped with a grating of 2400 lines/mm and a peltier cooled CCD. The 514.5 nm line of Ar+ laser was used as an excitation source. A microscope (from Olympus, Model: MX50 A/T) was attached with the spectrometer, which focuses the laser light on to the sample and collects the scattered light at 180o scattering geometry. The accumulation time for one window was selected as 100 s and three spectra were accumulated in each window. The GRAM?32 software was used for data collection. X?ray photoelectron spectroscopy (XPS) measurement was carried out using ESCLAB MKII instrument while none monochromatized MgKα X?ray was used as the excitation source. Thermal analysis of the medicine sample was carried out using a thermogravimetric analyzer (TGA) (Mettler/DSC1) and differential scanning calorimetry (DSC) (Mettler?Toledo 832) under nitrogen atmosphere at a heating rate of 20°/min and 10°/min, respectively. Carbon based material are more extensively classified on the basis of sp configuration. For example, graphite has 100% sp2?configured carbon; while diamond has 100% sp3configured carbon. All other forms of solid carbon would possess a mixture of sp2 and sp3 configured carbon with different sp2/sp3 ratio [18]. Amorphous carbon or free reactive carbon is an allotrope of carbon that contains both sp2 and sp3 bonded carbon and thus configured possess only a short?range order (does not have a crystalline structure). These amorphous carbon materials get stabilized by terminating dangling?π bonds with hydrogen and the materials is then called hydrogenated amorphous carbon.

The presence of different sp bonding of carbon atom could be more clearly determined by using Raman and X?ray photoelectron spectroscopic techniques. Raman spectroscopy is an important tool in investigating carbonaceous materials. Carbon shows common features in their Raman spectra in the 800?2000 cm?1 region. Two peaks referred to as the G and D peaks, lie at around 1560 and 1360 cm−1, respectively, are marked for visible excitation, and the T peak at 1060 cm−1, are seen only in ultraviolet (UV) excitation.

Fig. 2 shows the Raman spectrum of the medicine with 514.5 nm excitation wavelength. The G and the D bands are clearly visible in the spectrum. Two other bands around 960 cm−1 and 1000 cm−1 are also seen which could be attributed to appear due to silica compounds as is also marked in IR spectrum. For visible excitation wavelength, the Raman spectrum is dominated by the sp2 sites, because the excitation resonates with π states of carbon. The G and the D peaks are due to sp2 sites. The G peak is due to the bond stretching of all pairs of sp2 atoms in both the rings and the chains. The D peak is due to breathing modes of sp2 atoms in ring [19].

Content of sp3 and sp2 carbon can also be obtained through the deconvolution of the C1s peak of the carbon in XPS spectrum. The XPS spectrum of the medicine for C1s peak is shown in fig. 3. It is evident from the fig. 3 that the peak could be fitted into four peaks for the best fitting parameter (R2 = 0.9995). Four components are obtained around 282.6, 284.03, 285.2 and 286.8 eV. The one around 284.03 eV corresponds to sp2 bonded carbon atoms, and that around 285.2 eV corresponds to sp3 bonded carbon atoms. A third peak with lower intensity near 286.8 eV is assigned to some C?O contamination probably due to the absorbed oxygen on the surface of the Bhasma sample. Fourth peak at around 282.6 eV is not assigned, however, it is expected that the peak may be due to crystalline environment or some another contaminant [20]. Nonetheless, this observation clearly establishes that sp2 and sp3 bonded carbon material is present in the medicine sample along with hydrogen content. Thermal measurements were carried out to support the above results and also to have a concluding remark. 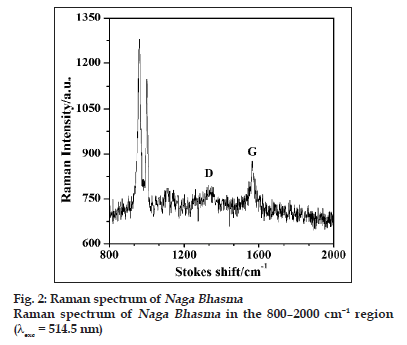 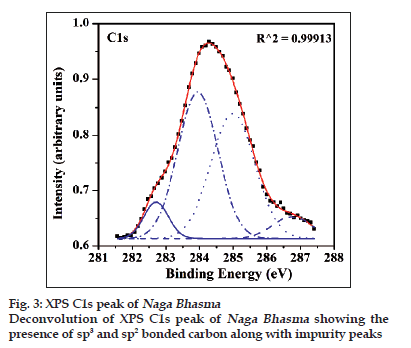 Fig. 4 shows the DSC and TGA plots of the as?prepared medicine sample. The first endothermic peak below 200° with a small weight loss is obviously due to adsorbed moisture contents in the medicine. It is notable that significant endothermic heat of reaction commences above 400° which supports the absence of volatile component. TGA measurements accompanied with the DSC scan shows weight loss from beginning. The weight loss increases with temperature and nearly 12% weight loss is observed upto 850°. This weight loss is high enough and cannot be explained only on the basis of the evolution of hydrogen which suggests desorption of hydrocarbon gases as well. It is notable that desorption of hydrocarbon gases are not due to oxidation of carbon compounds (because measurement has been carried out in nitrogen atmosphere) but this may be due to thermal cracking phenomenon.

Three endothermic peaks are observed at around 530, 585 and 800°. These peaks are at different temperatures probably due to the different gas evolution, particularly hydrogen and other compounds of carbon (hydrocarbon) [20,21]. Thus, during heating of the medicine the complex hydrocarbons are initially desorbed and followed by the light and simple hydrogen desorption. This clearly explains the decrease in the intensity of the IR peaks (in 1300?3600 cm?1) for the heated medicine samples also.

Thus, IR, Raman, XPS and thermal analysis shows the presence of non?volatile carbon compounds containing hydrogen (hydrogenated amorphous carbon) in the material due to natural precursors. The calcinations steps play a crucial role in adding the carbonaceous material in the medicine. During calcination above 700° inside a closed assembly of two earthen crucibles, volatile components of the organic material derived from the herbs get converted into gaseous form and decomposed, mostly hydrocarbon gases. These gaseous molecules are attached to the crystalline particles through weak interaction [22]. This process is facilitated due to the small size of the particles. 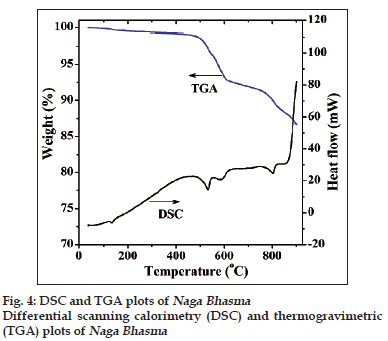 Due to the small particle size surface area and as a consequence surface to volume energy of the system increases. Thus, the free energy of the system increases proportional to the amount of new surface created. However, the laws of thermodynamics dictate that a system spontaneously will seek to attain the lowest possible free energy state, under the circumstances. In the present case, this is accomplished by the interaction of the metal surface with surrounding environment. It is expected that, a mutual attraction (commonly due to van?der Waals types of forces) between the surface of metal compound and surrounding environment results in physisorption of the carbon compound while at high temperatures, valence bonding could take place resulting in chemisorptions of hydrocarbon.

Since, sigma overlap between adjacent carbon atoms is sufficiently strong that is why they easily form stable chains (catenation property of carbon) in all the three possible sp configurations. These carbon compounds (having both sp2 and sp3 bonded carbon) possess a short?range order (non?crystalline, amorphous structure) and material get stabilized by terminating dangling?π bonds with hydrogen resulting in a hydrogenated amorphous carbon structure.

In conclusion, presence of carbonaceous material (hydrogenated amorphous carbon) has been identified in the Indian traditional biomedicine Naga Bhasma. The volatile organic compounds (derived from the natural precursors used in the preparation of the medicine) get converted into gaseous form, hydrocarbon gases, which are first physisorbed and then chemisorbed on to the metallic?particles. Chemisorbed carbon atoms catenate to form chain like isotropic structure in different possible hybridizations sp, sp2 and sp3 containing hydrogen. Present work also suggests the science and mechanism behind such complex preparations which could help in standardization of Bhasma medicines.